MAMAMOO’s Solar talked about her solo debut, her “Queendom” experience, and more!

On April 28, Solar appeared on MBC FM4U’s “Kim Shin Young’s Hope Song at Noon” to promote her solo debut with “Spit It Out.”

Solar talked about the meaning of her new song as she said, “I like taking on challenges and trying new things, and there are times when many people like it but there are people who don’t like it too. The meaning of the song is that despite that, I’m going to not pay attention to them and just shout it out, spit it out.”

Her single sold 70,000 copies in its first week, and she said, “It’s unbelievable. I’m so grateful to my fans.”

DJ Kim Shin Young also asked about Solar’s concept of a bald look for “Spit It Out.” Solar said, “The bald look was my idea. I didn’t know if people would like it but I thought, ‘I want to start off with my natural look’ and I ended up going as far as doing a bald look.” Solar previously revealed that she achieved the look by wearing a bald cap.

She added, “When Moonbyul heard about my bald concept she said, ‘Why are you doing a bald look? If you want to show your natural look, why are you putting makeup on?'” She made everyone laugh by adding, “It was a bit annoying.”

Solar also talked about how her YouTube channel Solarsido has surpassed 2.02 million subscribers so she’s received both a silver and gold button. “I’m going to work hard until I can get to the next milestone of 10 million,” she said. “I work hard at YouTube because it’s fun. I’m planning to try a variety of different things.” 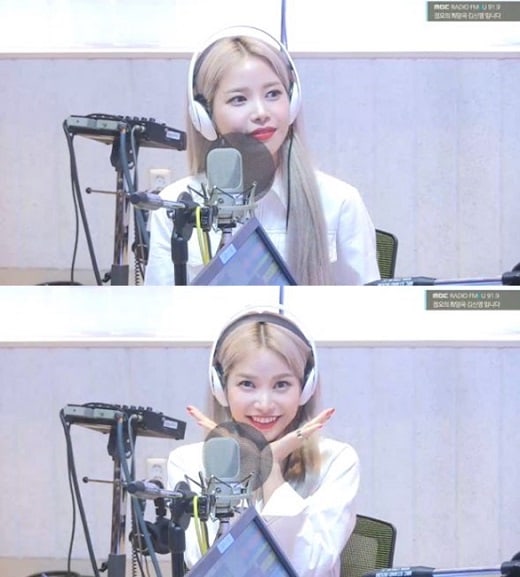 MAMAMOO took part in the Mnet competition show “Queendom” last year and took first place. “Both MAMAMOO and I gained a lot when we were on ‘Queendom,'” said Solar. “A lot of people became interested in us after that.”

However, she said she wouldn’t want to go on the show again. “First off it was too arduous, and also since we already won in the first season I think it would be too much pressure if we went on again,” she explained.

MAMAMOO’s labelmates ONEUS are appearing on the upcoming show “Road to Kingdom,” which premieres on April 30. Solar mentioned this and said, “I’m very shy so we haven’t talked much. I’m cheering you on in my heart. I’ve interested in how they’re doing and I asked about their ranking. I really hope that they will do well and win on ‘Kingdom.'” She clenched her fists as she passionately emphasized that she “really, really” wants them to do well.

Solar was also asked to name the top three female idol vocalists. She first picked Red Velvet’s Wendy and Apink’s Jung Eun Ji. When she was thinking of the third, Kim Shin Young suggested Solar herself.

After the show, a fan shared the conversation on Twitter and asked Jung Eun Ji to check it out. Jung Eun Ji replied, “Spit it out with a hot breath, Solar is the best.”

Later that day, Solar took her first win for “Spit It Out” on “The Show.”