On April 30, GOT7 and MAMAMOO’s Solar appeared as guests on the SBS Power FM radio show “Cultwo Show.”

GOT7 recently made a comeback with the mini album “DYE” and title track “Not By the Moon,” while Solar recently made her solo debut with “Spit It Out.” 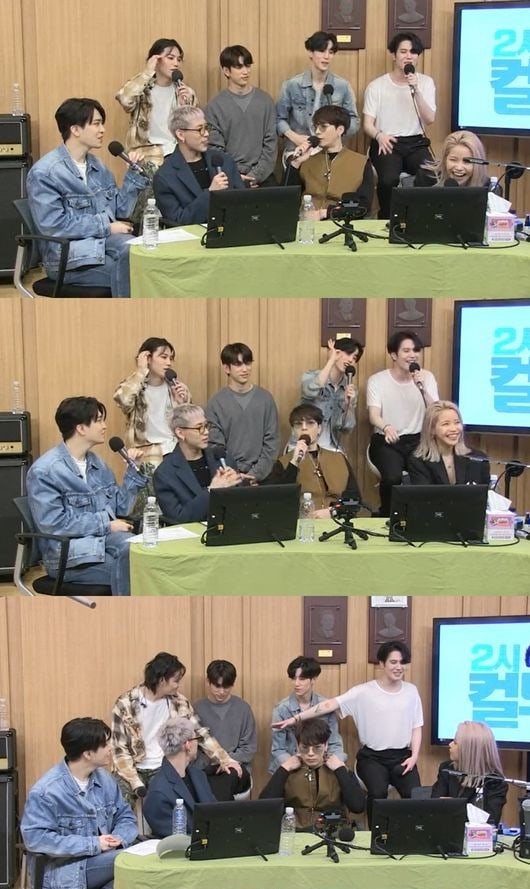 During the show, both artists talked about their latest releases. Yugyeom said, “‘Not By the Moon’ means ‘let us not swear eternal love by the constantly changing moon.’ It borrows lines from the play ‘Romeo and Juliet.'” Yugyeom also thanked fans for breaking the group’s personal initial album sales record with “DYE.”

JYP’s Park Jin Young participated in producing, writing, and arranging “Not by the Moon.” JB said, “We were very satisfied. The song is really good. While we promote it, I think, ‘The song gets better and better the more I hear it.’ Park Jin Young was 1000 percent involved. His songs are always flying high.”

Solar introduced her song “Spit It Out” and said, “It’s my first solo release and I always like trying new things and taking on new challenges, so the message of the song is, ‘I’m going to do whatever I want.'”

Special DJ Shin Bong Sun said, “You look really cool. It’s a ‘girl crush’ vibe.” Jackson added, “I really like your performance. I watch it every day. The intro is really cool.”

Solar responded, “I’ve also seen GOT7’s performances. Our comeback promotions have overlapped a lot, so we’ve heard your songs a lot, and every time, the MAMAMOO members talk about how good your songs are in the dressing room.”

GOT7 and Solar then answered questions that were sent in by listeners. Asked which member fit the concept of ‘Romeo’ best, JB said, “From a visual perspective, it’s Mark. He looks the most innocent and handsome.” Jinyoung joked, “There’s also a Juliet” and picked JB.

Asked which Korean words were hardest to pronounce, BamBam said, “I get confused between ‘mirror’ (geo-wool) and ‘winter’ (gyeo-wool). ‘Clementine’ (gyul) is also hard.” Jackson said, “I don’t have any words like that. If there are words like that, I just stay quiet.”

Jinyoung said, “When we record songs, the ‘s’ (ㅅ) sound is really difficult. The double ‘ss’ (ㅆ) sound is even harder.” Mark quipped, “You must have used the double ‘ss’ sound a lot in every day life for you to get confused.”

Jinyoung also mentioned his current drama, tvN’s “When My Love Blooms,” and said, “It’s an honor [to be working with such a brilliant cast] and I’m learning a lot. They’re not people that I can talk about recklessly. They are very relaxed and understanding. I’m filming three things at once and I have a lot of scheduling conflicts, but they are very understanding about it. I’m very grateful to participate in filming.”

Solar was asked what she planned to give her parents for Parents’ Day and said, “My parents always say I should give them money [instead of a present].”

GOT7
MAMAMOO
Cultwo Show
Solar
How does this article make you feel?