MBC’s popular reality show “Home Alone” (“I Live Alone”) did not air on May 1.

The network explained, “Due to breaking news, ‘Home Alone’ is not airing today. We ask viewers for their understanding.”

“Home Alone” is scheduled to air every Friday at 11:10 p.m. KST, but it was postponed due to breaking news about a forest fire in Goseong.

On May 1 at 8:20 p.m. KST, a fire at a home in the county of Goseong in Gangwon province spread to a nearby mountain. The Korea Forest Service’s Central Forest Fire Prevention Headquarters has increased the forest fire national crisis warning level to “critical,” which is the highest level of severity. Firefighters and equipment have been sent from all provinces and cities to help. Local residents have been instructed to evacuate due to concerns about strong winds overnight causing the fire to spread.

Model Han Hye Jin and actor Song Seung Heon are featured in the episode of “Home Alone” that was scheduled to air on May 1. Han Hye Jin took a photo of herself watching the news instead and uploaded it to her Instagram stories with the message, “How terrible. A large fire has erupted in Goseong in Gangwon province. There’s too much wind. I’ll pray that everyone is safe and nothing bad happens.” 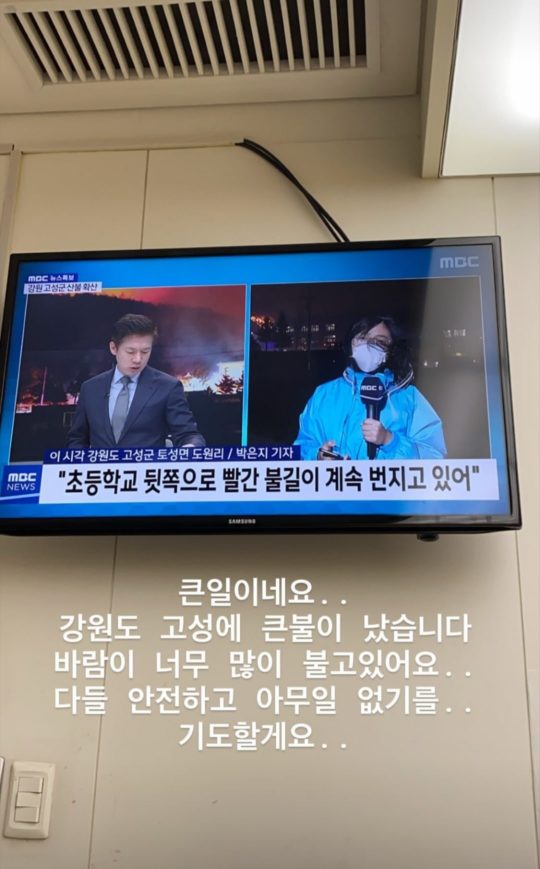 Home Alone
Han Hye Jin (Model)
How does this article make you feel?