2AM’s Jo Kwon and BTOB’s Eunkwang appeared on the KBS 2TV show “Problem Child in the House,” after they both were recently discharged from the military!

The pair talked about their time carrying out their mandatory military service and also how they’re doing after being discharged. Eunkwang said, “They say that everyone has dreams about the military after they’re discharged. I also returned to the military in a dream. I had a nightmare that I was back in the military as a soldier going on a march. It made my heart sink.” 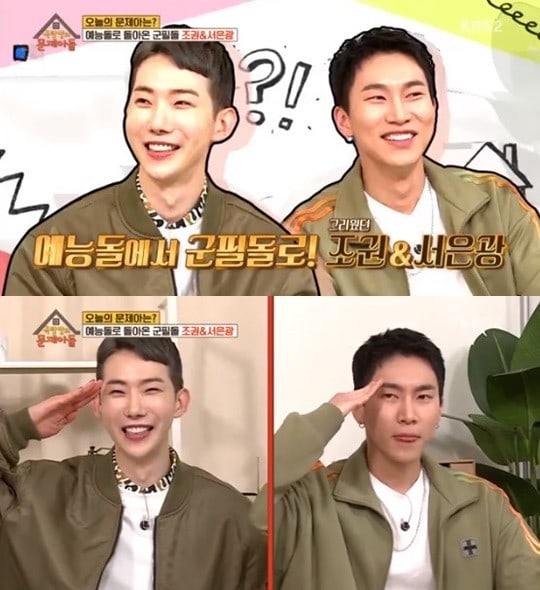 Jo Kwon named actress Kim Hye Soo as the person who gave him strength the most during his military service. The two stars appeared together in the 2013 drama “The Queen of Office,” and Kim Hye Soo has gone to see all his musicals since then.

Jo Kwon said, “She’s even seen one of my musicals three times,” and he shared that Kim Hye Soo had come to see his military musical “Shinheung Military Academy.” Jo Kwon said that after seeing the show, she had said to him tearfully, “I just hope that you will be discharged in good health.”

“She also took photos with all the soldiers,” he said. “The officers were even more excited than the soldiers.” He said that the experience had given him the chance to see a new side of the officers, who were usually difficult to approach. He joked, “It made me realize that the general and colonel are people too.”

“He was my senior,” he said. “I came in with a later group, and at the time Kang Ha Neul was on leave. I was assigned to the same barracks as him, and he’d left a letter for me on the table. He welcomed me and explained where everything was in the building, and he even wrote about the other soldiers’ personalities and hobbies. It was really touching.” 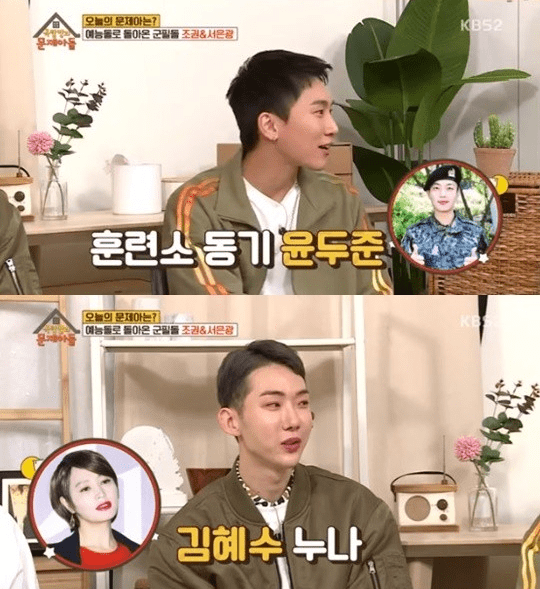 Eunkwang talked about how he felt like he had a rivalry going with Highlight’s Yoon Doojoon, who enlisted at the same time as him. “It was just me who felt that,” he said. “There are online letters lately. You get the letters every night, and out of the 168 recruits, Yoon Doojoon and I were celebrities so fans send a lot of letters.”

Eunkwang explained, “The assistants would divide the letters into three compartments. There was one for Yoon Doojoon, one for Seo Eunkwang, and one for the 166 other recruits. Doojoon got a lot of letters.”

When asked who won, Eunkwang said, “I lost a bit, but I received plenty of love.”