On the May 7 episode of MBC’s “True Story of Exploration,” Goo Hara’s brother Goo Ho In gave an update on the lawsuit with their mother and spoke about the outcome he’s hoping for.

The late singer’s family has been in a legal dispute after Goo Hara’s mother returned following her daughter’s death to claim half of Goo Hara’s inheritance, after she abandoned the two children when they were young.

Goo Ho In had previously appeared on the “True Story of Exploration” last month, when he said, “I don’t think that everyone should be called a parent just because they give birth to someone. It’s very unfair that the law states that someone who abandoned us and even gave up her parental rights gets to take the money that my sister made.”

In the latest episode, the producers caught up with him again to hear his thoughts and get an update.

He shared that watching the show had made him miss his sister even more. When asked if he’d heard from his mother since the broadcast, he said that he recently received a written response from her.

“She continues to claim that she will be taking half of the inheritance,” he said. “If we win the lawsuit or she gives [the inheritance] up, then I want to start a foundation so that we can help people like single fathers, single mothers, and young people who want to become celebrities but are having a hard time.” 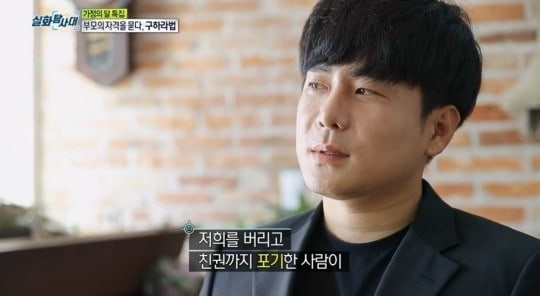 Lastly, Goo Ho In said to his sister in a video message, “Ha Ra. I’m really sorry that I wasn’t able to help you a lot, and I’m going to work hard and live enough for your share too. I really miss you, and I love you a lot.”

The production team went to their mother’s residence to hear her side of the story, but the mother avoided their questioning and said she had nothing to say.

Goo Ho In has called for the establishment of a “Goo Hara Act” that would change inheritance laws so that families in the future will not suffer from the same tragedy that theirs is going through. A petition for the act reached 100,000 signatures and had been submitted to the National Assembly.