Boom and Super Junior’s Eunhyuk showed off their close friendship with Leeteuk by teasing him mercilessly on “Amazing Saturday”!

On the May 9 episode of “Amazing Saturday,” Super Junior’s Eunhyuk and Leeteuk appeared as guests at the invitation of their close friend Boom, who hosts the tvN variety show.

Boom introduced the two Super Junior members by saying, “My friends of 12 years who shared the pain and happiness of variety shows in our youth with me, Super Junior’s Leeteuk and Eunhyuk!”

He went on to remark, “To my knowledge, Leeteuk has very high self-esteem.” Leeteuk confirmed, “Yes, I love myself.”

Boom then kicked off the teasing by playfully continuing, “Once, I asked Leeteuk to come to a gathering, but he said he couldn’t go out because there were too many fans outside. He still came, but he wore a mask and hat that made him noticeably stand out, so that anyone could point him out. He apologized, saying, ‘I had no choice but to cover up because there are so many fans here.’ But as he walked away, the back of his jacket read ‘Super Junior Leeteuk.'” 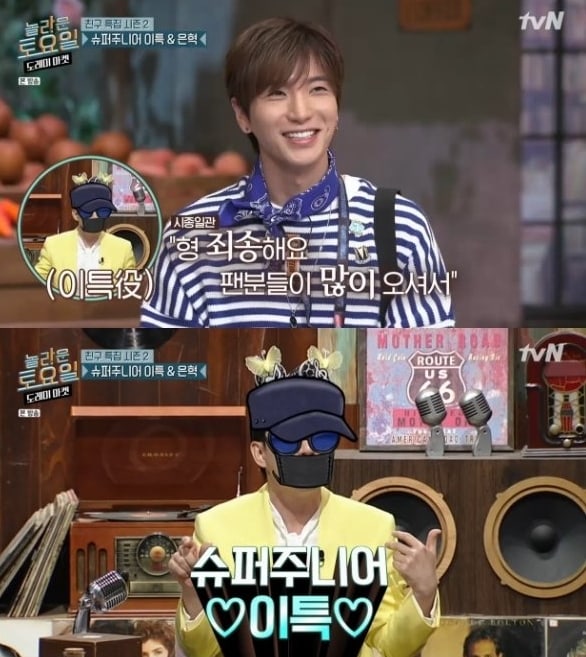 Eunhyuk jokingly chimed in, “In one phrase, Leeteuk is an attention seeker. He is the president of the National Attention Seekers Association.”

Boom also shared that Eunhyuk had expressed his wish for the “Amazing Saturday” cast members not to pay any heed to anything Leeteuk said while filming the show that day. Eunhyuk explained with a laugh, “This is because more than half of what he says is useless.”

Eunhyuk continued, “In our Super Junior group chat, more than 90 percent of it is Leeteuk. Even if we don’t reply, he talks to himself. If that’s not enough for him, he writes long posts on social media. Since even that isn’t enough for him, he’s started going on YouTube these days. Recently, he held a live broadcast talking by himself for about four hours.” 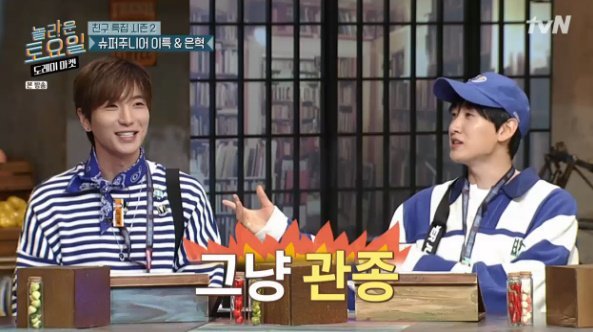