NCT Dream recently took first place with their comeback track “Ridin’” on “Music Bank.” Haechan said, “It was Parent’s Day so I want to say to my parents that I’m always grateful and I love them. I also want to tell my members I’m grateful and say to [our fans] NCTzens, ‘Thank you and I love you.'”

Jeno said, “First, we can’t meet our fans right now, so I think about how good it would be if we could meet with our fans while experiencing something so great. I hope that when we meet again, we’ll all be happy together.”

The group also talked about being surprised by Mark on the set of their title track MV. Mark was originally a member of NCT Dream but graduated from the unit when he turned 20 years old. SM Entertainment recently announced that NCT Dream’s graduation system will no longer continue and the seven original members of NCT Dream, including Mark, will be promoting as a unit again following this current comeback.

Haechan explained, “NCT Dream used to have a graduation system. Mark graduated, but he came to cheer us on when we filmed our music video, and I was grateful for that.”

Chenle added, “We were shooting the music video when he suddenly came in wearing a hat, glasses, and a mask and danced to ‘BOOM.’ None of us recognized him. I was thinking, ‘Is one of our staff members really that good at dancing to ‘BOOM’?’ but it was Mark.”

Jeno, Chenle, and Haechan talked about how they hope to promote with Mark again. Haechan said, “I want to do a concert together with our fans once the situation gets better.” Jeno and Chenle said, “We want to promote together as seven. We want to promote for a long time.” 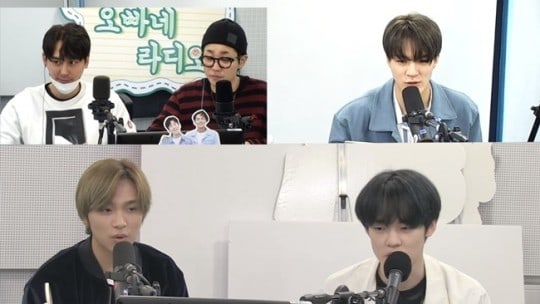 When asked what made them want to be idols, Chenle said, “My dream was to be a soldier, then a doctor, and then a police officer. I’m good at math so I also dreamt of being a mathematician. Then since I enjoyed singing I was doing some work in that and ended up being cast by SM and became a singer.”

He explained, “I did a lot of activities when I was young. SM saw my old performances and contacted my mother. She didn’t know SM so she turned down the offer right away. At the time, my activities felt like a hobby and I was working hard at my studies. But my dad said that SM was a good company. They got in contact again and ended up talking.”

The members were asked to name a senior artist who treats them well or a role model. Jeno said, “Yunho is the senior artist who gives me practical feedback and advice. Another senior that talks with me a lot is Super Junior’s Donghae.” Chenle also named Yunho.

Haechan also said, “I’ve really liked SHINee’s Taemin since I was very young. I was accepted into the company through an audition, but the reason I joined SM was Taemin too.” He shared, “To be honest, I think of senior artists as the idols that I’ve respected since I was young, so even if I have the opportunity to get closer with them, I tend to just watch them from afar.”

NCT Dream recently performed in SM’s online concert series “Beyond LIVE.” Haechan shared, “I was really worried. Usually when you do a concert, you hear cheers from fans. I was very worried but I could see fans’ faces all around me and their cheers even came in through my in-ears. I thought it would be awkward but it felt like a real concert.”