The trilogy is a favorite format for movies and books, but it’s also popular in K-pop releases too — and with good reason. Over the course of three of albums or songs, an artist can tell a story in three parts, or do a deep-dive into a concept by showing three different sides of it. Often one section features a twist that surprises you or makes you think, but a well-conceived trilogy will tie together its three parts, twist and all, into an overarching narrative that you’ll want to listen to again and again to pick up new insights. K-pop has had its fair share of trilogies over the years, and the 12 artists featured in this article have released masterful trios of songs or albums. From three-part stories of friendship and romance, to themes covering Greek gods and explorations of youth, check out the amazing K-pop trilogies below!

VIXX’s 2016 album trilogy “Conception” tackles Greek mythology, taking on a different Greek deity for each album: “Zelos,” “Hades,” and “Kratos.” To embody Zelos, the god of jealousy and zeal, VIXX sings about a lover who is leaving them in the title track “Dynamite.” The dramatic, dark concept of their next title track “Fantasy” is the personification of Hades, the lord of the underworld, and the group wrapped the trilogy up with Kratos, god of strength and authority, as expressed in the forceful “The Closer.” Dive into the trilogy with the zeal of jazzy “Dynamite”!

2. SHINee’s “Misconceptions” and “The Story of Light” 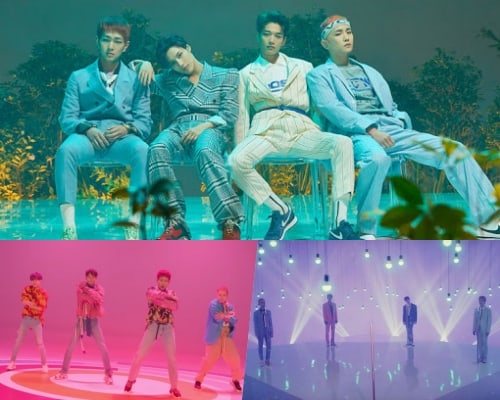 SHINee returned to the trilogy in 2018 with “The Story of Light,” an absolutely gorgeous set of EPs that shows the group continuing to make music while coping with the death of member Jonghyun. It’s an incredible story of strength and love, with soothing singles “Good Evening” and “I Want You” from the “Ep. 1” and “Ep. 2” albums building up to the third part’s single “Our Page,” in which the members pay tribute to Jonghyun while affirming that they will carry him in their hearts while they remain together on their journey. A little sad, but mostly healing, this trilogy truly embodies light.

Sunmi’s EP “Warning” featured a trilogy of separately-released singles that comprise, well, a warning. The songs tell the story of a romance, but they were released in reverse order, beginning with the end of the relationship. In “Gashina,” Sunmi watches a lover walk away from her, lamenting the breakup but asserting that she will “live like a flower” and bloom. In “Heroine,” the singer knows that the relationship is going to have a sad ending for her, but tells her lover to do as they please; she’ll stick with it until the end because “the show must go on.” Finally, in the prequel “Siren,” Sunmi warns someone to stay away and not harbor romanticized fantasies about her: she is dangerous. Start from “Siren” to watch the story unfold from its beginning: 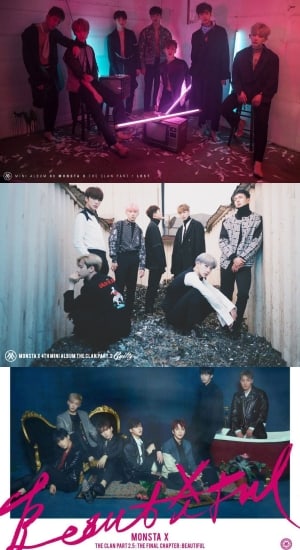 MONSTA X’s epic trilogy “The Clan” consists of three EPs: “Lost,” “Guilty,” and “The Final Chapter” (which, although the third part of the trilogy, is actually labeled as “Pt. 2.5”) Their cinematic trio of music videos follows the members as they escape various entrapments: in the dystopian world of “All In,” the guys show their strong bond while standing up to injustice. In “Fighter” they are hostages in a mysterious, trippy hospital and must work together to escape. “Beautiful” offers a slightly different interpretation of the same theme: the MV is more elegant and luxurious, but the members are still trapped: this time, seemingly, by their own personal weaknesses. The group ties the trilogy together with a visual motif: the repeated image of purple flowers and a mysterious liquid that is extracted from the blossoms. Start this cinematic journey with “All In”! 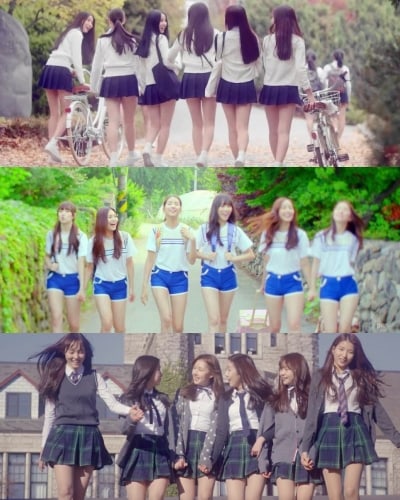 GFRIEND began their careers with a school-themed trilogy, starting with their debut track “Glass Bead,” in which they light up various school settings with their bright choreography. The girls followed this up with the more assertive, but equally cheerful, “Me Gustas Tu,” with an MV that shows them having fun outdoors on a summer trip. Finally, they wrapped up the series with the slightly moodier “Rough,” which shows the members at the end of a school year, reflecting back on the memories they’ve made. This trilogy is full of the warm energy of youth! 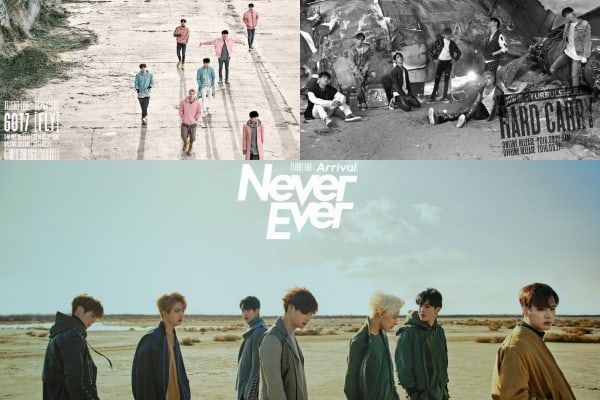 The installments of GOT7’s “Flight Log” trilogy are aptly named “Departure,” “Turbulence,” and “Arrival,” and the intricate storyline traced in these three albums has been the subject of much fan analysis! Fittingly, idol-actor member Jinyoung is the protagonist of the narrative, which begins with a car crash in the trailer for “Departure.” The ensuing journey through the music videos for “Fly,” “Hard Carry,” and Never Ever” follows Jinyoung in the aftermath, as he is shown lying in a hospital bed and trapped in a glass box. The series is tied together with several symbols: levitation, lush green plants, and the image of a blue bird. Is Jinyoung the sole survivor? Or is he the member who died in the story? Watch the trilogy to decide for yourself! 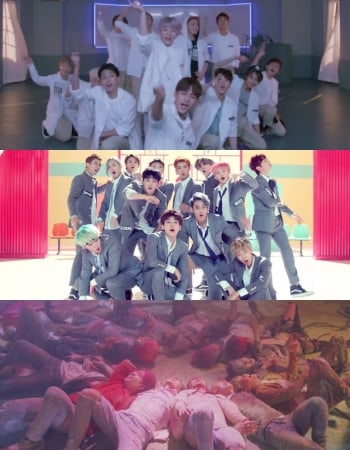 SEVENTEEN kicked off their boyhood trilogy with their debut track “Adore U,” a funky journey through the story of a boy who begins falling for a girl, with sweet lyrics about how he wants to learn everything about her. The group followed up with a school concept for the hit track “Mansae” and then had some rebellious fun in the MV for “Pretty U,” both of which serve as confessions of feelings. “Pretty U” is softer than its preceding songs, but is a more confident take on the theme of young, boyish romance!

Lovelyz debuted with a concept of youthful femininity that formed a trilogy, showing a more mature side in each progressive single of the three. “Candy Jelly Love” showcased their bright vocals in a school setting filled with colorful candies. In their next release “Hi~,” the Lovelyz members showed off an older aura, singing in softly lit rooms with florals and frilled outfits. Finally, “A-Choo” brought back the school girl uniforms of “Candy Jelly Love,” but the stronger vocals and more powerful dance moves show that this is definitely a more mature Lovelyz than we saw at the beginning of the trilogy!

9. BTS’s school, “The Most Beautiful Moment in Life,” and “Love Yourself” 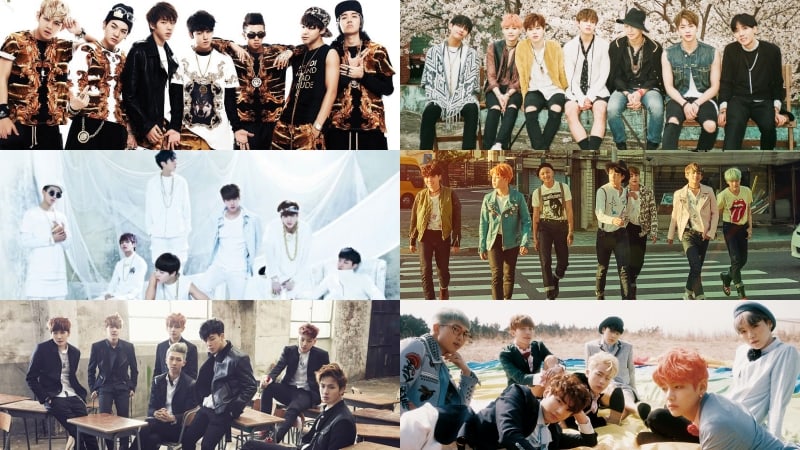 BTS has released a trio of trilogies, beginning with their debut “school trilogy” that dealt with youthful topics such as following your dreams, in the first and second title tracks “No More Dream” and “N.O,” and love, in the final track “Boy in Luv.” They took up the concept of youth again in 2015 with the masterful trilogy “The Most Beautiful Moment in Life,” in which they illustrated how youth is simultaneously a time of difficulties and mistakes, but also filled with possibilities. The title tracks “I Need U” and “Run” emphasized the darker side of youth, while the third part of the album included the wistful “Save Me” and resolved to “set everything on fire” in the rebellious “Fire.”

Finally, BTS’s most recent trilogy “Love Yourself” explores different facets of love. As befits an album titled “Love Yourself: Her,” the first single “DNA” is about falling into a love that feels like fate. The twist in this trilogy comes in the middle album, “Love Yourself: Tear,” which features darker tracks: its lead single “Fake Love” is about realizing that one has lost oneself in the midst of a romance — which means, of course, that the love is untenable. But the boys emerge stronger and more sure of themselves in “Love Yourself: Answer,” which offers the “answer” of self-love, especially in the lead single “IDOL.” Check out “DNA” below, or go back to the very beginning with “Serendipity” — the intro tracks are equally important to this trilogy’s story!

“ReVe” stands for Red Velvet, but it also means “dream” in French — which is the perfect word to describe this trilogy. It truly is a festival, beginning with the “Day 1” EP and its whimsical carnival music video for “Zimzalabim” before transitioning to the tamer, summery “Umpah Umpah” in “Day 2.” In the “Finale” compilation album, Red Velvet shows their mastery of the trilogy form by offering something unexpected and different, yet still in the fantasy theme: “Psycho” features a dark and mysterious concept, but with the same dreamy quality that was pervasive in the first two parts of the series. Dive into “The ReVe Festival” with “Zimzalabim”: 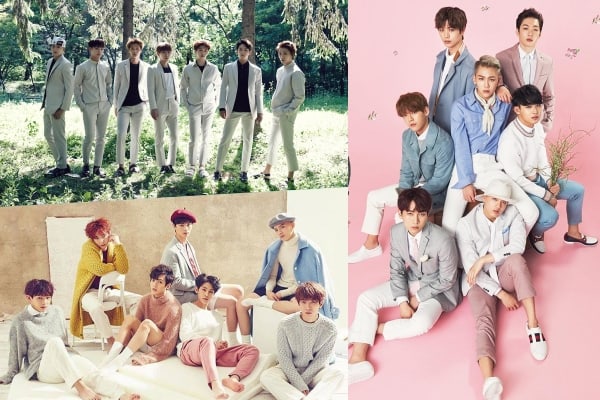 No group does ballads quite like BTOB, and thankfully they gifted us with an entire trilogy of smooth, soothing tracks! The trilogy began in 2015 with “It’s Okay” and then “Way Back Home,” both of which were accompanied by MVs that showcased the boys’ acting skills with storylines about fighting through hardships. The final ballad, “Remember That,” is slightly more uplifting, and features a beautifully contemplative music video that brings the trilogy to a close on a reflective note. Few groups could pull off a dance version of a ballad, but check out the one for “It’s Okay”: 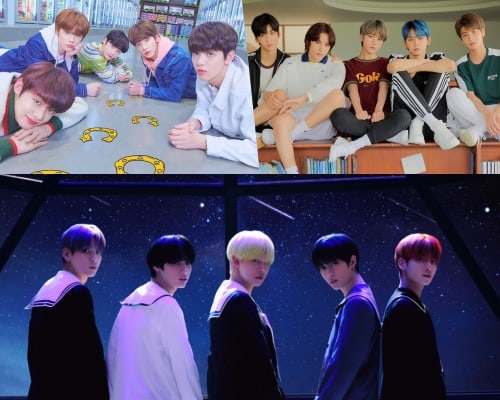 TXT’s “The Dream Chapter: STAR” tells a story of youthful friendships, which is manifested in the infectious energy of title track “Crown.” The follow-up album, “The Dream Chapter: MAGIC,” builds off of the first by tracing the journey of those friends on various adventures — but its tracks, like the hit single “Run Away,” show a distinctively more dream-like quality than “STAR.” Finally, TXT’s most recent mini-album, “The Dream Chapter: ETERNITY” offers a darker twist from the previous two installments. In its title track “Can’t You See Me?,” the boys are still hanging out and laughing together, but there’s a more sinister feeling of loneliness underneath the surface, as the guys sing “my friends don’t understand me anymore” and have a food fight with red fruits that look suspiciously like blood. It’s an unexpected yet effective end to the successful trilogy!

Hey Soompiers, which of these trilogies is your favorite? Rumor has it that BLACKPINK will also be releasing a three-step comeback soon, too! Tell us your thoughts in the comments!