Lee Min Ho and Lee Jung Jin will face off in a dramatic reunion in SBS’s “The King: Eternal Monarch”!

“The King: Eternal Monarch” tells the story of Emperor Lee Gon (Lee Min Ho) and detective Jung Tae Eul (Kim Go Eun), who live in parallel universes where Korea is a constitutional monarchy and democracy respectively, but work together to try and save peoples’ lives.

In the previous episode, Lee Gon realized that Lee Rim (Lee Jung Jin), who killed Lee Gon’s father Emperor Lee Ho (Kwon Yool) and took the other half of the legendary flute of the Silla Dynasty (manpashikjeok), is still alive and able to stop time when he travels to the alternate universe like Lee Gon. However, unlike Lee Rim, who can tell which universe Lee Gon is in thanks to the imperial spy, Lee Gon unfortunately cannot know which world Lee Rim has gone to.

The newly released stills capture Lee Gon and Lee Rim in the moments before a dramatic confrontation amidst a large crowd, creating a chilling atmosphere. Lee Gon looks on with his cold gaze while Lee Rim, who is not shaken by Lee Gon’s energy, faces him with as much charisma and power. Will Lee Rim be able to recognize Lee Gon 25 years after the night of treason? 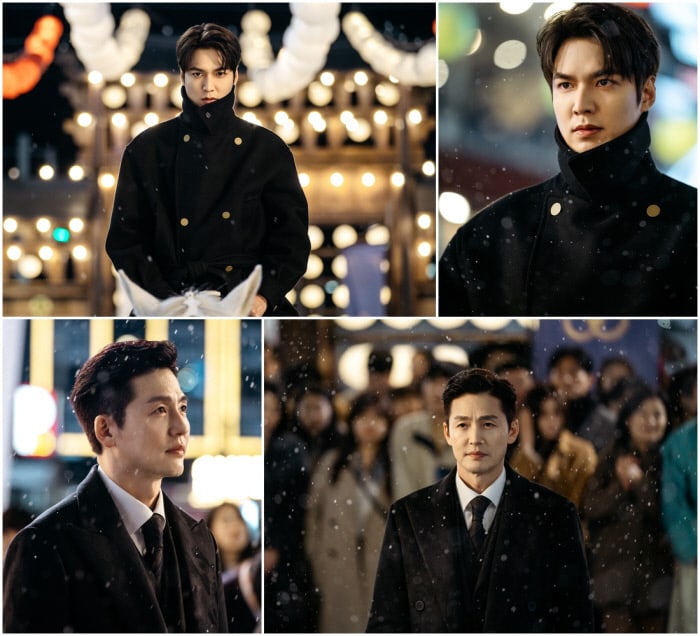 The confrontation scene was filmed in April at Haeundae District in Busan. Even after props were being set up to represent the Korean Empire late into the night, a large crowd of people formed to watch the filming. Lee Min Ho and Lee Jung Jin put their heart and souls into their acting for the dramatic scene as their newly formed audience cheered. The crowd and staff applauded as the actors successfully wrapped up their scene.

The production team commented, “We captured Lee Min Ho and Lee Jung Jin’s heart-stopping charisma battle through a one-of-a-kind atmosphere. Please stay tuned to see how Lee Gon and Lee Rim, who both hold one half of the legendary flute and travel through time, will approach each other, and what will become of them.”