Hyerim and her fiancé Shin Min Chul got serious about their future on MBC’s “Don’t Be Jealous.”

On the May 18 episode, the couple visited the home of Hyerim’s parents after announcing their marriage plans.

Calling her parents on her way there, Hyerim said, “I’m on my way with your son-in-law.” Shin Min Chul said, “Both of our families have been close since we began dating, so it feels really comfortable.”

On this day, the couple surprised Hyerim’s parents with carnation soap and cash as gifts for Parents’ Day, which is annually celebrated in Korea on May 8.

Hyerim’s mother and Shin Min Chul made braised spicy chicken together in the kitchen while Hyerim and her father looked through photo albums. Hyerim burst into tears looking at the photo and reading the handwritten letter her father left her. 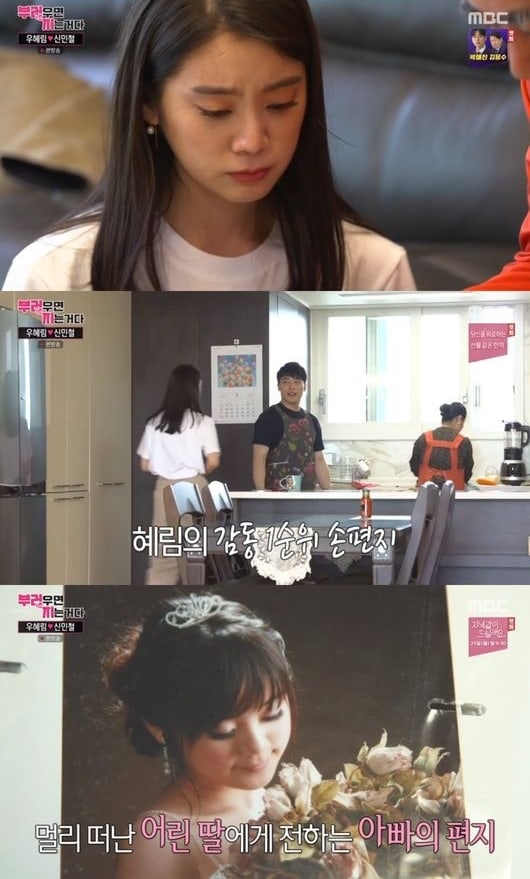 While enjoying their meal together, the four of them had a realistic conversation about marriage. Hyerim’s father asked, “Do you go to pick up Hyerim at her agency when she’s done working? Do you go pick her up and take a break?”

Her mother continued, “Where do you plan on buying your newlywed home?” Shin Min Chul replied, “I plan to find one near the taekwondo studio. I think it’s going to be near Jamsil.” Hyerim’s father commented, “Are you not going to visit often because you’re far away?” and Shin Min Chul answered, “We’ll come over often.”

Hyerim’s father then asked, “I heard that houses near Jamsil are very expensive. How much money do you have saved?” Shin Min Chul responded, “I have enough cash to lease a home by jeonse.”

A jeonse lease is a type of rental arrangement where the renter makes a large lump-sum deposit on a space (usually 50 to 80 percent of the market value) instead of making monthly payments. The landlord makes money by investing the deposit and keeping the interest, and the deposit is then returned to the tenant when they move out. Having enough money for a jeonse lease is therefore a good start for a newlywed couple.

Hyerim’s mother followed up with, “Who is going to take care of the finances?’ and Hyerim said, “I think he’s going to have to be in charge out of the two of us and then I’ll slowly learn and take over.”

As for plans for having children, the couple answered, “We’re thinking about two years after our marriage.”

The foursome enjoyed a walk in the park together. Shin Min Chul offered to give his future mother-in-law a piggyback ride to repay her for the delicious meal, and she smiled looking at her dependable future son-in-law. 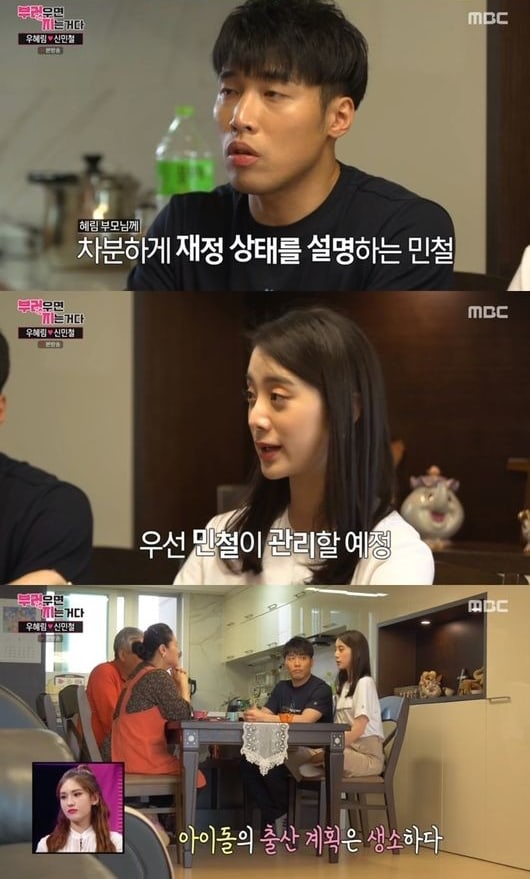