“D-2” is now here and ARMY has taken over Twitter as they react to the much-anticipated mixtape from BTS’ Suga!

On May 22, Suga released his new mixtape under his rapper name Agust D, which includes ten songs in all, as well as a music video for “Daechwita.” Excitement over “D-2” quickly grabbed the top spots on Twitter’s worldwide trends. 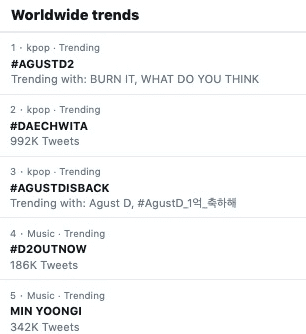 ARMYs are amazed by the stunning MV for “Daechwita” and every aspect of Suga’s performance in the video.

OKAY BUT CAN WE ALL DISCUSS ABOUT THIS PART PLEASE ????? #AGUSTD2 #Daechwita pic.twitter.com/MdmA2g4OEj

THIS PART SLAPS SO HARD I GOT FCKING GOOSEBUMPS #DAECHWITA #AGUSTD2 pic.twitter.com/kMGpGIZX8Q

"Revenues keep going up up up up and up, everyday Bang PD keeps dancing on on on on and on"

Meanwhile, the whole mixtape is fire.

Once again, Agust D didn’t pull any punches in his lyrics and fans are loving it.

“you think my success is related to your failure. how fuckin delusional”

MIN YOONGI IS THE REALEST MF OUT THERE #AGUSTD2 pic.twitter.com/HSisjrfGkT

"WHO SAID TIME IS GOLD? MY TIME IS MORE EXPENSIVE THAN THAT" I THINK YOONGI IS ACTUALLY INSANE FOR THIS IM DIZZY

“we're gonna enlist when the times right for us so for all the bitches who sell our name for a piece of our fame shut the fuck up” #AGUSTD2 pic.twitter.com/kd0wQXVfDf

when interviewers ask bts disrespectful questions yoongi really just sits and stares at them in silence WHILE CASUALLY PLANNING TO END THEM ON HIS MIXTAPES???? HE’S INSANE

so much shit is said about them daily n theres only so much they can or Want To keep quiet about. their solo projects allow them more freedom to express themselves w/o the added implied layer of a filter. he can speak more rawly abt their fame, frustrations, military plans, etc.

And of course, ARMY’s also shared some hilarious tweets.

yoongi taking a break from being a bts member: pic.twitter.com/hWyBAL97yI

Overall, fans are bowing down to the king today.