Woollim Entertainment released a statement responding to reports that one of Oh My Girl’s albums that was gifted to Lovelyz was being sold online.

On May 25, the album in question was put up for sale on an online resale site with the title, “Selling ‘Closer’ signed album. ‘Closer’ by Oh My Girl.”

The owner of the sales post also wrote, “It also has JinE’s autograph. The message is written in Jiho’s handwriting, so it has value. The photocard is Binnie. Quote your price. Since ‘Closer’ isn’t in print anymore, the going price is 70,000 won (approximately $56) for opened albums and 130,000 won (approximately $105) for sealed albums, so take that into consideration when placing your bid.”

The post included a picture of the album. The message on the album reads, “To Lovelyz. Hello! This is Oh My Girl. ‘Ah-Choo’ is so fresh and bubbly! We hope you will show a lot of support for our new song ‘Closer’ as well! We’ll become a group that always works hard.” 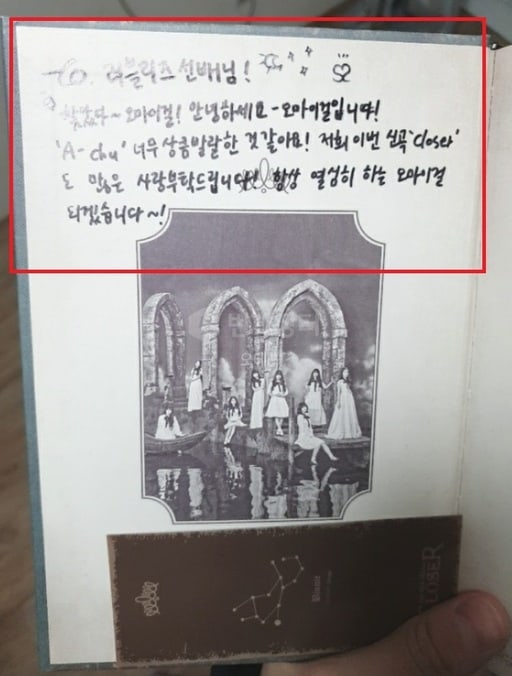 Woollim Entertainment responded to the news with an official statement, which reads as follows:

Hello, this is Woollim Entertainment.

We are writing to inform everyone about the illegal sale of our artist’s personal property.

Recently, we became aware that a CD that Lovelyz had received as a gift in the past was being sold on a mobile application, and we have checked with both staff and subcontractors to confirm how the item was leaked. We are currently taking care to store all items, including CDs that are gifted to our artists, and we would like to inform you that we have never handed off any items to others.

The item in question has been determined to be a case of theft. We have requested a police investigation and will do our best to confirm the exact details of the leak and retrieve the item.

We extend our sincerest apologies to those affected by this unexpected situation. We promise to take extra precautions to make sure such an incident never happens again.

Lovelyz
Woollim Entertainment
How does this article make you feel?