ONO Entertainment has issued a response to LIMITLESS’s Yoon Hee Seok’s post about leaving the group.

On May 24, Yoon Hee Seok took to Instagram to write, “I no longer want to live as LIMITLESS’s Yoon Hee Seok, but as the person Yoon Hee Seok. This will come as a surprise but I wanted to let the fans know, who have been worrying after not hearing from me since last December’s promotions. I am deeply sorry. I sincerely thank everyone who has sent me their love until now.” 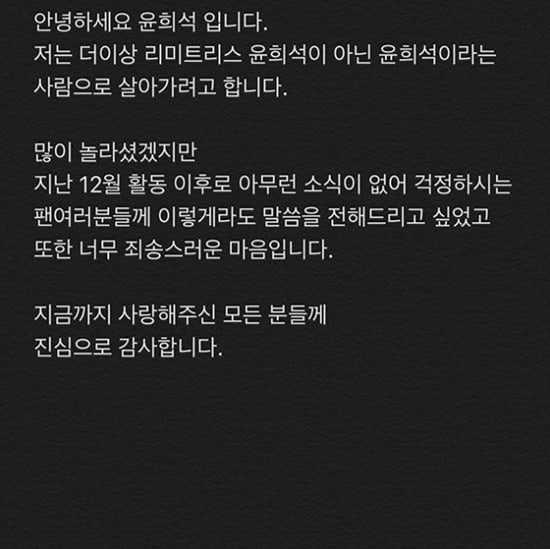 On May 25, ONO Entertainment released a formal statement in response to the issue. The agency stated, “We are currently checking the situation regarding Yoon Hee Seok’s post. We have not canceled our contract with Yoon Hee Seok, nor were there any problems with the contract. We were supposed to be in the middle of Japanese promotions at this time, but due to the COVID-19 situation, the members are resting at their individual homes. In the middle of this, Yoon Hee Seok suddenly posted on social media about leaving the group and has not been responding to our attempts to contact him.”

Yoon Hee Seok first made his TV debut as a Jellyfish Entertainment trainee on Mnet’s “Produce 101 Season 2.” After the show ended, he left Jellyfish and signed with ONO Entertainment, debuting in their new boy group LIMITLESS in 2019. LIMITLESS last had a comeback in November 2019 with “Wish Wish.”

Yoon Hee Seok
LIMITLESS
ONO Entertainment
How does this article make you feel?