NU’EST’s JR and MONSTA X’s Shownu recently attempted to get closer on “Problem Child in House”!

When asked what kind of relationship the two have, Shownu shyly responded, “We’re colleagues,” making the cast crack up. The MCs followed up by asking, “What do you two call each other?” JR awkwardly answered, “I’ve never called him.” 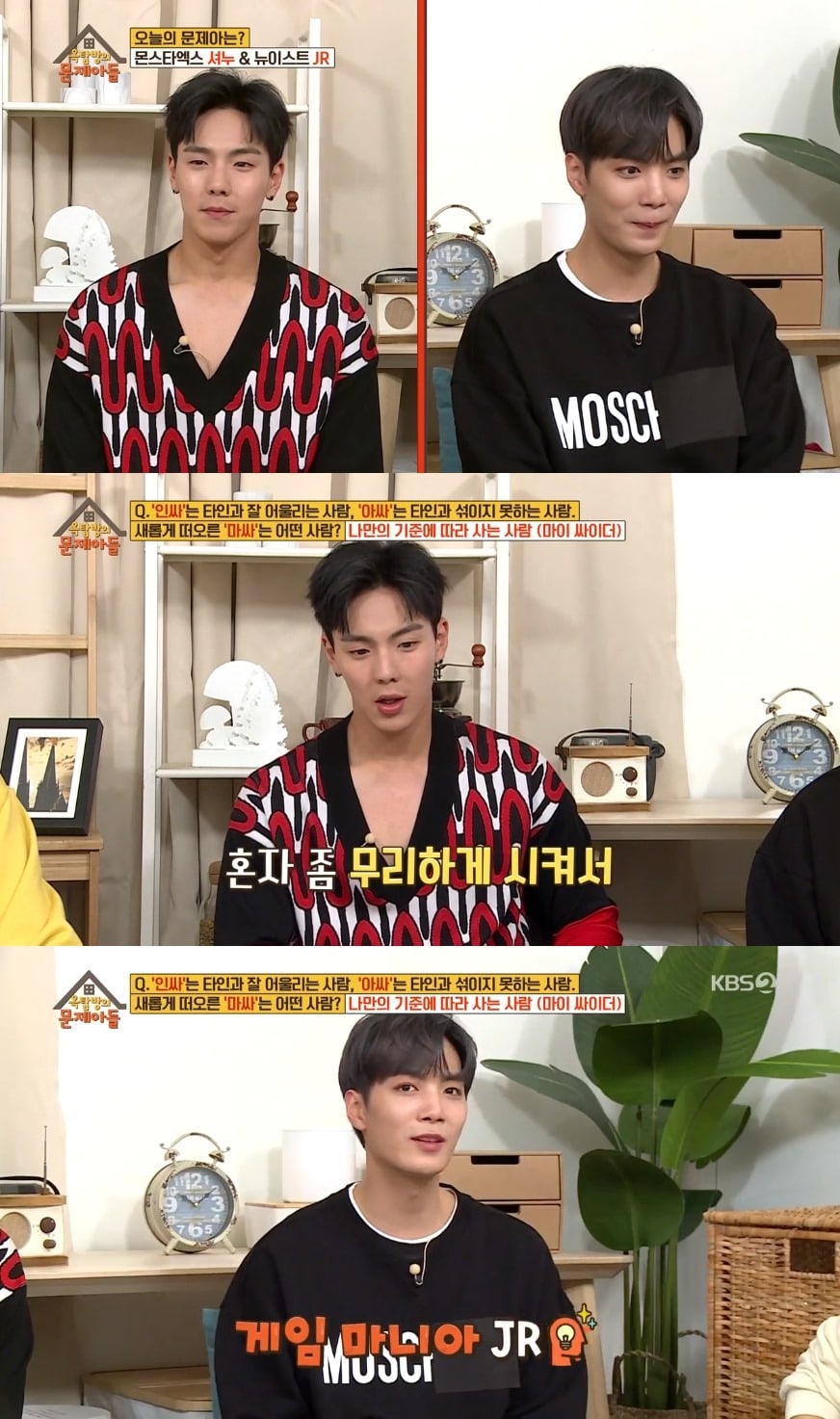 The first quiz question was, “As the generation of in-ssa and a-ssa leaves, what does ma-ssa mean?” The first two terms are slang for “insider” and “outsider” respectively, referring to people who do and do not mesh well with strangers.

Kim Yong Man correctly guessed the answer to be “my-sider,” referring to people who live their own lives without paying attention to trends or what others are doing.

The boys were asked if they have tendencies to act like this, and Shownu agreed. He explained it in terms of his love for eating, sharing, “I enjoy ordering a lot by myself and trying each food one by one.” He also surprised the cast by revealing that he’s gone to BBQ restaurants alone to eat.

JR correctly guessed the second and third question, quickly becoming an ace. The fourth question was, “What’s a trait every good leader needs to help their team members improve?” After a chaotic guessing period, they were given the hint that Shownu has never displayed said trait on a broadcast.

Jung Hyung Don exclaimed, “Haven’t you ever gotten angry?” Shownu explained, “I just don’t get angry.” He made everyone laugh by sharing an exception, saying, “I do get annoyed when I don’t get food and get told to work.” Eventually, Shownu correctly guessed, “They must be able to express anger.” 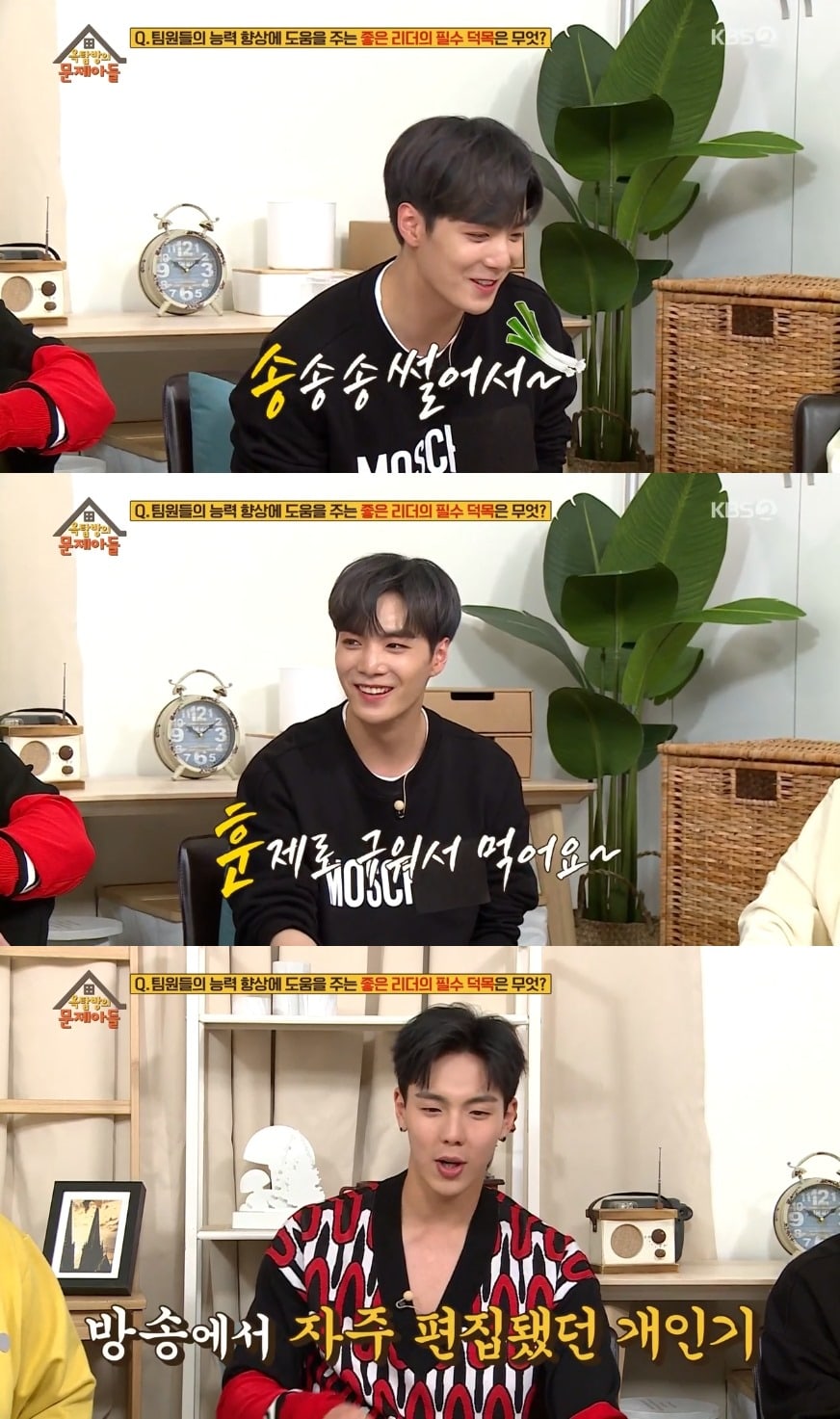 After the boys continued to exude awkward energy throughout the quiz, the MCs embarked on a challenge to bring them closer, proposing that they look into each other’s eyes.

The next question asked what artist swimmers listened to most at a global swimming competition last year. Shownu, who used to be a swimmer, shared, “I would get so nervous that I couldn’t even listen to music. One time, I even stood on the standing block with my shoes on. I was wearing my slippers and my mom called from the stands, ‘Hyun Woo (Shownu’s real name), take off your shoes!’ That was in elementary school, and I think I placed in fourth.”

The final question was, “What is the method Lee Hyori learned from her husband Lee Sang Soon to raise her self-esteem?” The answer was to create many moments where you feel praiseworthy and proud of yourself.

The MCs asked when they all felt most proud of themselves, and JR answered, “I only have one, that I didn’t give up until now.” He continued, “I think it’s praiseworthy that my members and I endured three years of training and six years of not being well-known.” Shownu shared, “I think being positive is my most praiseworthy trait.”

NU’EST recently came back with the group’s eighth mini album and title track “I’m In Trouble.” MONSTA X will be making their return with “FANTASIA X” on May 26 at 6 p.m. KST. “Problem Child in House” airs Mondays at 8:50 p.m. KST.

MONSTA X
NU'EST
shownu
JR
Problem Child in House
How does this article make you feel?