BTS’ Suga sat down for an interview to talk about his new mixtape!

On May 22, Suga dropped his second mixtape “D-2,” under his rapper name Agust D. He’s now shared an interview from the set of his MV for the title track “Daechwita.”

“I had fun working on it,” he said as he introduced his new mixtape. “It was supposed to be out last year, but I spent some more time editing it. I think that made the mixtape more of a completed work.”

He laughed a bit as he said that he didn’t know it would take him so long to put out his next mixtape (his first one, “Agust D,” came out in August 2016). However, he explained that there were other priorities and he’d wanted to include many songs on it.

Suga shared that he’d met a lot with the director to plan the music video for “Daechwita.” He said, “They were going to keep it minimal, but I was like, ‘No matter what, I want to film it at a historical drama set.'” So they came up with a script and edited parts, and Suga shared ideas for scenes he wanted. “I enjoyed the whole process,” he said. 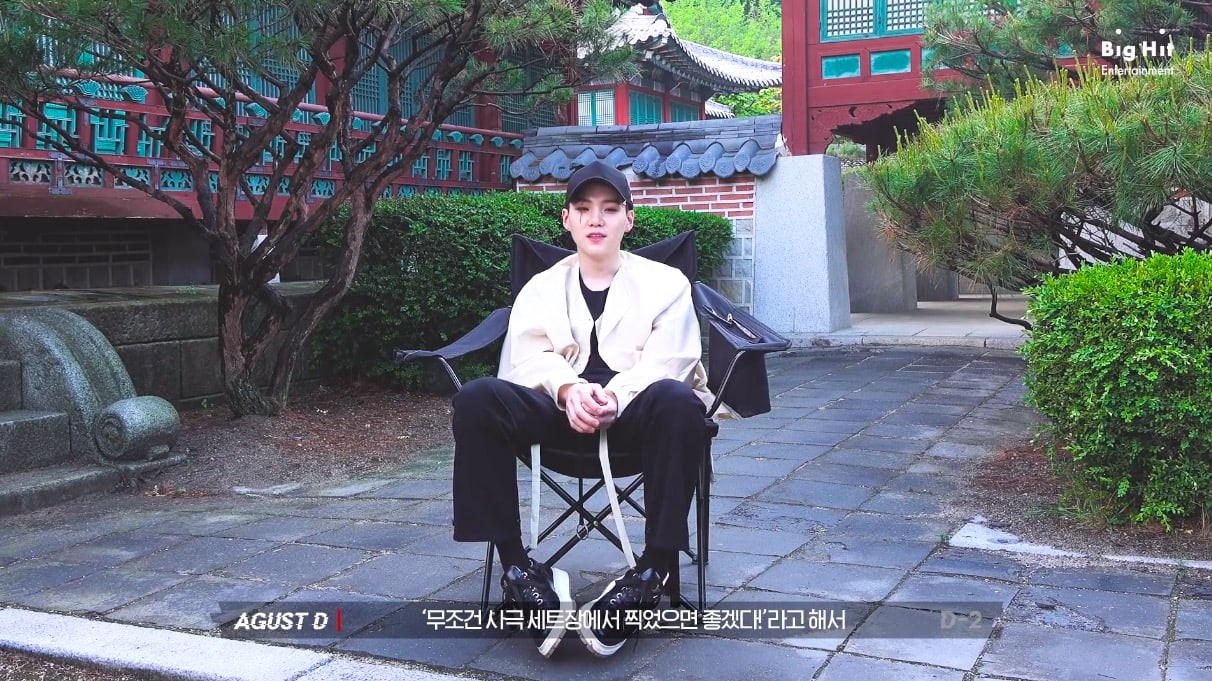 When asked why he wanted a set that looks like a historical drama, he said, “It goes well with the song.” He laughed as he added, “And I’ve liked historical dramas since I was a kid.”

“I’ve used traditional Korean sounds in my music a lot, so I was like, ‘I should probably cut back on that, I should wrap it up here,'” he said with a laugh. “That’s how the music video was made.” 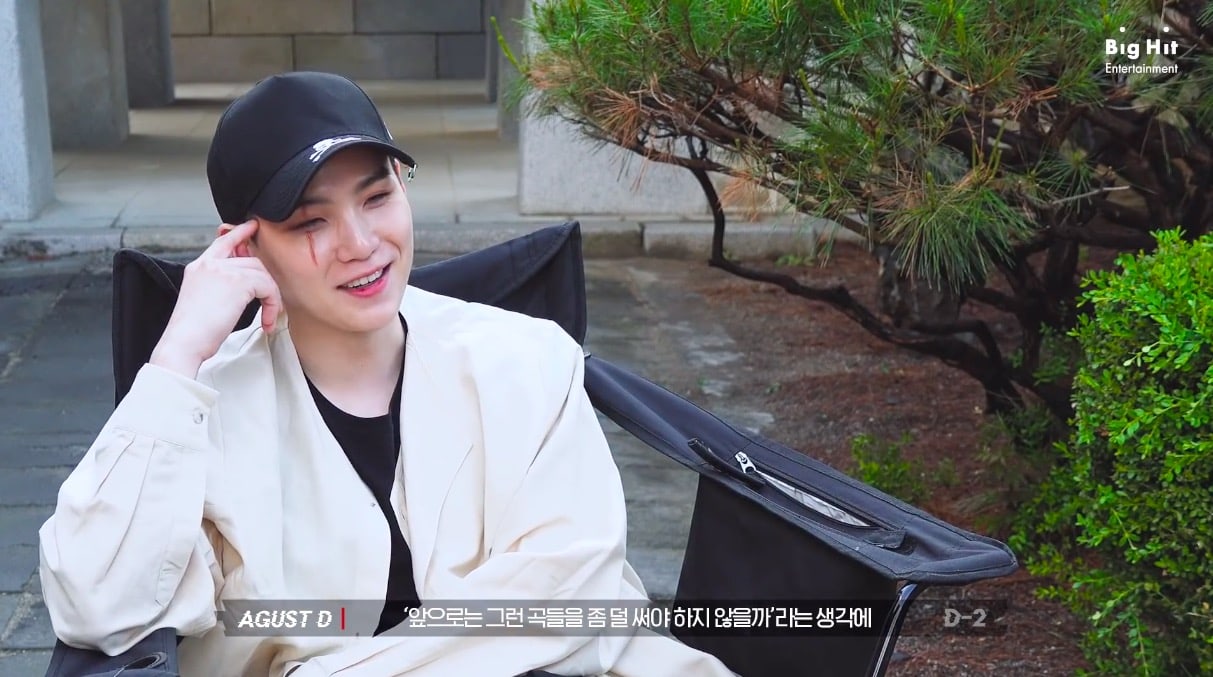 He commented that the scar on his face had been his own idea, and it was a part of his goal to make the MV look visually satisfying. Suga also shared that he wanted to show interesting contracts in the MV by combining the traditional and modern, such as the modern Agust D drifting his car on a traditional set.

When asked why he wanted a scar on his eye, he said with a laugh, “It wasn’t for any special reason, I just wanted it to be a bit shocking when I lifted my face, that’s all.”

Suga also performs a sword dance in the MV, and he shared that this was his first time doing so. “The practice was tough,” he said. “I had no idea swords were that heavy.” He explained that when they were getting props ready, he had done research into the kind of sword he wanted (a Joseon hwando), got 20 links together, and sent them to the company to choose one.

“So I used a hwando made by a real sword craftsman,” he revealed. “Ah, it was so heavy, so it was a bit tough. So we changed the blade into aluminum. That’s how I did it, it was fun. I like trying new things, which I got to do a lot this time.”

On the topic of which song he worked the hardest on, Suga said he worked hard on all of them. He said that he’d finished “Daechwita” the fastest and he hadn’t been worried a lot about it.

“The track I listen to a lot these days is called ‘People,'” he also shared. 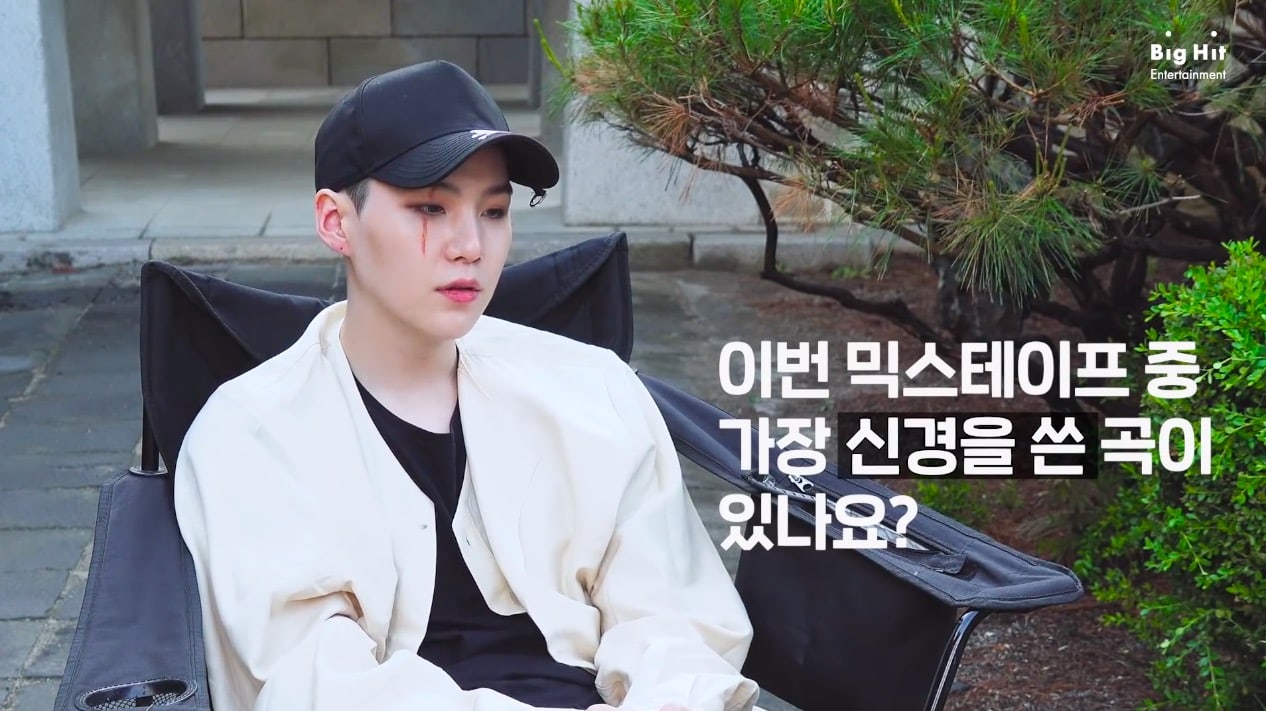 He went on to say that the songs in this new mixtape address a lot of different topics, comparing it to his first mixtape that focused mainly on stories of his past. “This one is mostly about my present,” he said.

He described the interlude “Set Me Free” as including a new genre for him, as he sang throughout the track and used a different vocal style. “It’s a completely new style that I’d never tried,” he said. “The recording was fun. I did all the recording myself this time.”

Suga’s new mixtape also includes collaborations, and he was asked how he chooses the artists he wants to work with. “When I’m composing, when I’m writing the melody, I just know, ‘I want this artist, I want this artist with this style,” he said. “If I can’t find someone then I just sing it myself.”

He then thanked his collaborators, including his groupmate RM, NiiHWA, NELL, and MAX.

Suga described “D-2” in one sentence as “The records of 28-year-old Agust D.” He shared that he thinks it would be fun to compare how his thoughts and views differ between his 2016 and 2020 mixtapes.

What’s your favourite track on “D-2”?