Yoo Jae Suk, Lee Hyori, and Rain will be promoting as the co-ed group SSAK3!

Previously, Yoo Jae Suk, Lee Hyori, and Rain confirmed that they would be forming a co-ed group through the “summer dance music” project on MBC’s “How Do You Play?” On June 4, the upcoming project group held a YouTube live broadcast in which they decided on their group name.

During the broadcast, the three discussed ideas for their team name such as DaeSangPoJin (meaning shingles, but short for “a lineup of those who have won a daesang”), JungBanDae (meaning complete opposites, but short for “really welcoming huge stars”), 20th Century Idols, Hyori and Two Kids, and more. Eventually, they decided to promote under the name SSAK3. The name in Korean is similar to the word SsakSseulYi, which means to sweep. The members decided on the name to represent that they would be sweeping the music charts. 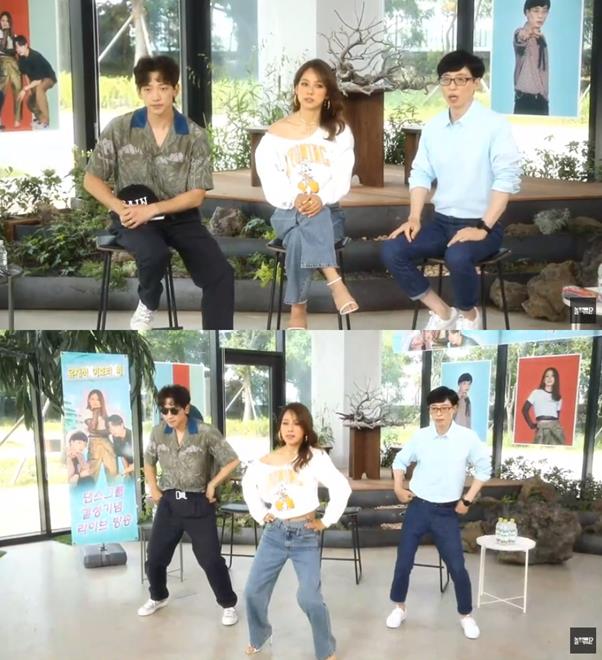 The three members also decided on their new stage names for their co-ed group. Yoo Jae Suk already had many options such as Yoo-Go-Star and Yoo San Seul (Yoo Jae Suk’s stage name as a trot singer). Although he considered Yoo-Typhoon (meaning that he would take up the industry by a storm), he leaned towards the stage name Yoo-Dragon, which is a reference to BIGBANG’s G-Dragon.

Lee Hyori decided that her stage name would be Linda G as a play on words from a phrase meaning, “Everyone pees their a little when Lee Hyori appears.” Rain revealed that he would take some more time to decide between the names Beat and B-Ryong, which means that he will become the dragon of the world of singers. Yoo Jae Suk’s and Rain’s final decisions will be revealed in the June 6 broadcast of “How Do You Play?”

Although Lee Hyori and Rain are confirmed as members of the co-ed dance group, other members may be added to the group. SSAK3 will make their debut on July 18.