The cast of “Good Girl” took on their first quest in the June 4 episode!

The second round featured Lee Young Ji facing off against Giriboy. Lee Young Ji shared that she still contacted Giriboy and called him her mentor, after he played that role on “High School Rapper.”

The two artists then showed off different styles with their performances, with Lee Young Ji performing “I’m Lee Young Ji” (literal title) and Giriboy performing “A Star Is Falling” and “Divorce Papers.” Lee Young Ji came in first for this round.

In the end, the win went to the Just Music team. Han Yo Han then had everyone laughing when he asked Hyoyeon to take a photo with him and declared himself a successful fan of Girls’ Generation.

The “Good Girl” team scored the win overall! Lee Young Ji received the highest number of votes, so she took home the prize of the flex money, using it to buy gifts for her family. 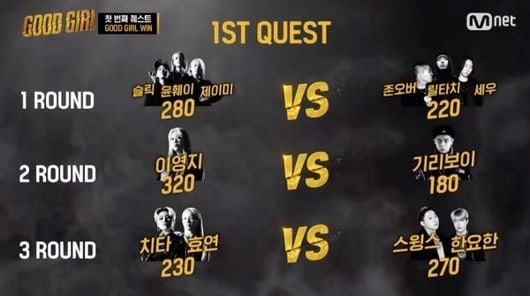 What’s your favorite performance from the quest?