“Hospital Playlist” Cast Talks About How Much The Drama Means To Them, Excitement To Return With Season 2, And More

The cast of “Hospital Playlist” gathered for one last goodbye before season two!

On June 4, tvN aired a “Hospital Playlist” special to bring viewers behind the scenes of the hit drama. Following its conclusion, the producers told the main cast, “Thank you, we’re sorry, and if there’s not much else going on, we’ll see you in November.”

On the last day of filming, the main cast, also known as the “99’ers,” (referring to the year their characters all graduated from medical school) shared their thoughts on the drama’s conclusion. Jo Jung Suk commented, “It doesn’t feel real. I feel like I have to keep filming tomorrow and the week after.” 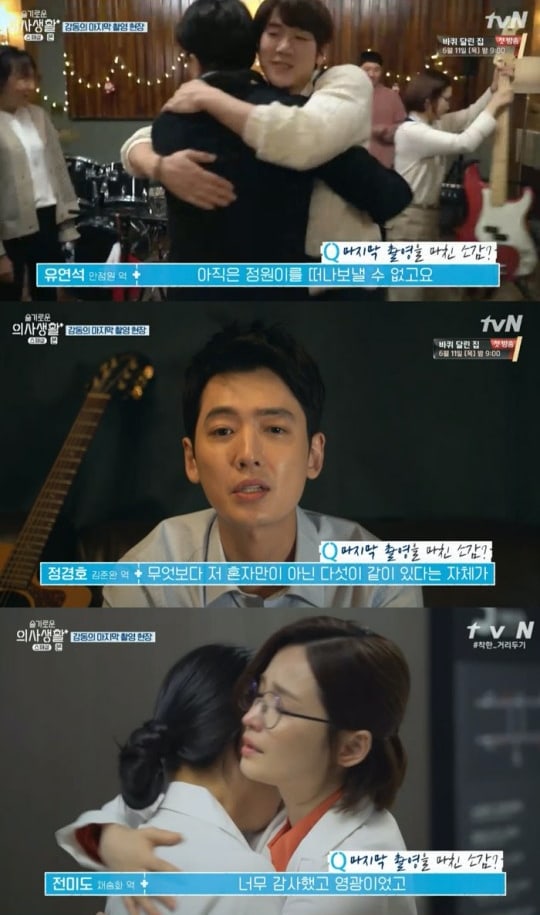 Yoo Yeon Seok asked, “Do I really have to let it go now? I can’t let Jung Won go yet.” Jung Kyung Ho shared, “More than anything, rather than being alone, the fact that the five of us were together made me happy. I think Joon Wan would be happy too.”

Jeon Mi Do shared, “I am so thankful and it was an honor.” Kim Dae Myung commented, “I think this is one of my top 10 memories in life that I will remember forever.”

The special also showed the cast’s first meeting at their very first script reading. It was previously revealed that Jo Jung Suk and Yoo Yeon Seok had both helped Jeon Mi Do secure her role by recommending her to the director. When Yoo Yeon Seok arrived, Jeon Mi Do told him, “I gained a big advantage thanks to you.” He responded, “Jung Suk mentioned you too. It’s because you are so skilled.” 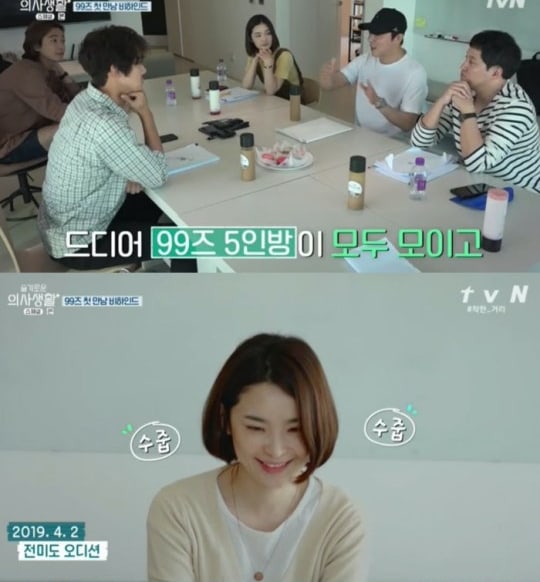 Jo Jung Suk was the last to arrive but immediately diffused the awkward atmosphere with his calming presence. He told Jeon Mi Do, “I saw your performance. I heard you were good but it made me think, ‘She’s really good.'”

Later in the special, the main cast participated in a quick relay interview. When asked what her favorite OST from the drama is, Jeon Mi Do picked “In Front of City Hall at the Subway Station” by Kwak Jin Eon explaining, “Should I say it has a melody that evokes nostalgia? The lyrics have a similar vibe to our drama.”

She also chose Jung Kyung Ho’s character Kim Joon Wan as the friend who fit her character best, sharing, “It’s because there are a lot of scenes of us eating together.” 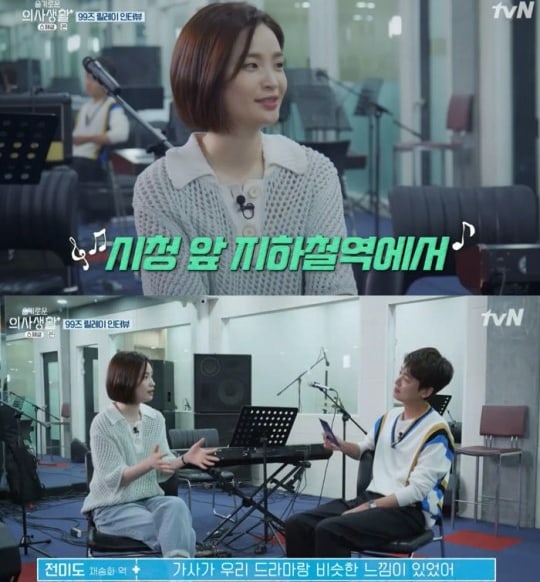 Kim Dae Myung was asked if he had any trouble portraying a mama’s boy and doing lots of cute things and he answered, “Playing a mama’s boy was harder.” He also chose Lee Ik Joon as the character he would like to try but added with a laugh, “I don’t think I’d be able to.”

Yoo Yeon Seok’s question was to rate his drum skills, to which he responded, “I think I’d be able to give myself a score in the high eighties.” His comment was met with praise from the cast, with Kim Dae Myung sharing, “You suffered the most,” and Jo Jung Suk adding, “Yeon Seok and Kyung Ho improved the most.”

Jo Jung Suk spoke about his chart-topping OST track “Aloha,” commenting, “Although I had originally thought that music was important to this production, I didn’t know I’d receive this much love. I’m so thankful. It’s an honor for my family.” 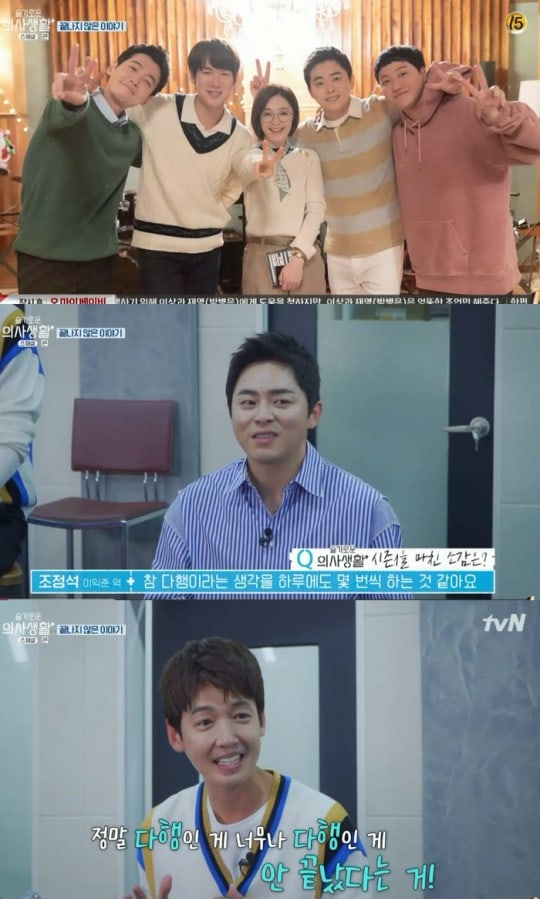 Jung Kyung Ho picked his line “Let’s date” from when he asked out Ik Soon (Kwak Sun Young) as the most heart-fluttering line.

The episode additionally featured many bloopers, the cast’s favorite scenes, and farewell comments from the extended cast. 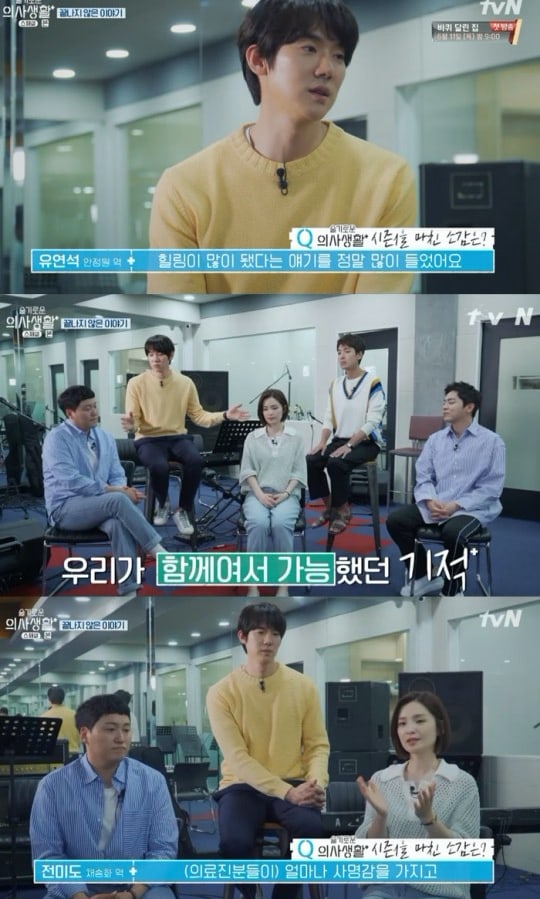 The “99’ers” also expressed the same excitement as viewers for the next season of “Hospital Playlist.” Jo Jung Suk shared, “I think a couple times a day what a relief it is that the drama has a season two.”

Jung Kyung Ho hilariously commented, “I looked in the mirror and saw Joon Wan. That’s why I dyed my hair. It is such a huge relief that it’s not over.”

Kim Dae Myung revealed, “For the first time, I thought that I’m so lucky to be an actor.”

Yoo Yeon Seok shared, “I heard from many people around me that felt very healed while watching our drama. I was so proud that we were making such a meaningful drama and I believe it was a miracle made possible because we were together.”

Jeon Mi Do added, “Since I was portraying a doctor, it was inevitable that my emotions regarding medical staff who work so tirelessly would change completely. I think I was deeply able to recognize the sense of duty they must have to do their work. I’d like to take this opportunity to thank them.” 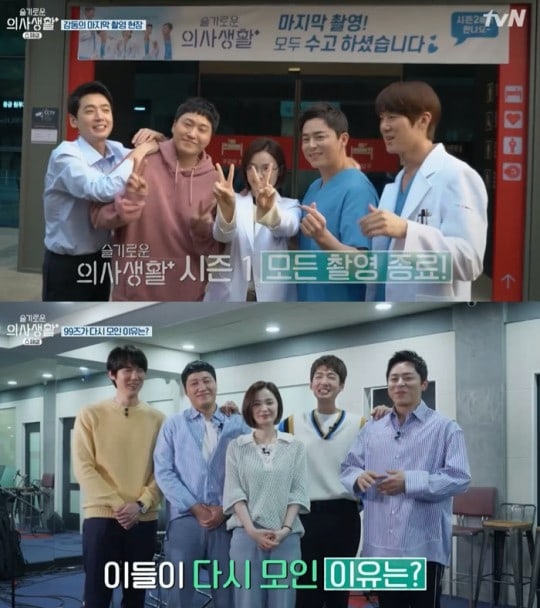 “Hospital Playlist” season one came to an end on May 30, hitting a personal best in ratings with the finale. Although details are unconfirmed, the drama plans to gear up later this year for a return with its next season.