Watch: Golden (Formerly G.Soul) Shocks Coaches And Viewers Alike By Auditioning On “The Voice Of Korea 2020”

Golden (formerly known as G.Soul) surprised everyone with his appearance as a contestant on Mnet’s “The Voice of Korea 2020.”

“The Voice of Korea 2020” involves a blind audition in which coaches Kim Jong Kook, BoA, Sung Si Kyung, and Dynamic Duo sit with their backs turned to the stage and judge contestants on their voices alone. When the coaches want a contestant to join their respective teams and continue competing on the show, they press a button to turn their chairs around and face the singer.

On the June 5 episode of “The Voice of Korea 2020,” Golden auditioned for the show using his birth name Kim Ji Hyun. The moment he started singing the first line of Lee So Ra’s “Please,” BoA and Dynamic Duo turned their chairs around, showing that they wanted him to join their respective teams. By the end of the song, Kim Jong Kook and Sung Si Kyung had also turned their chairs, meaning that Kim Ji Hyun achieved an “all turn.”

After his performance, Kim Ji Hyun introduced himself, saying, “I am singer promoting under the name Golden. I decided to participate in ‘The Voice of Korea 2020’ using my name Kim Ji Hyun.”

Dynamic Duo’s Gaeko shared that he turned his chair because he liked the sound of Kim Ji Hyun’s voice and was shocked when he saw his face. Choiza then revealed that Kim Ji Hyun had used the stage name G.Soul in the past, shocking BoA who exclaimed, “What? You’re really famous!”

At a backstage interview, Kim Ji Hyun shared how he made his debut and what he has been doing lately. He explained that he signed with JYP Entertainment at the age of 13 through a competition TV show, adding, “I only trained for a long time. I’m still a rookie artist. I’d be lying if I said the process to my debut wasn’t hard, but doesn’t everyone have a hard time?” As for his recent activities, Kim Ji Hyun said, “I sang on the streets of London. I did it without much thought, but a lot of people came to watch. I was so happy then. I want to stand on stage soon, but there aren’t many opportunities these days (due to the coronavirus pandemic). Singing is the only thing I know how to do. That’s why I came to this stage where I can sing.”

Regarding his decision to change his stage name from G.Soul to Golden, Kim Ji Hyun revealed, “[G.Soul] wasn’t a name I came up with. I wanted to give myself my own name. I want to become a shining artist, just like the word ‘golden.’ I would like to sing in front of everyone often. I want to be someone who sings with sincerity to all people.” 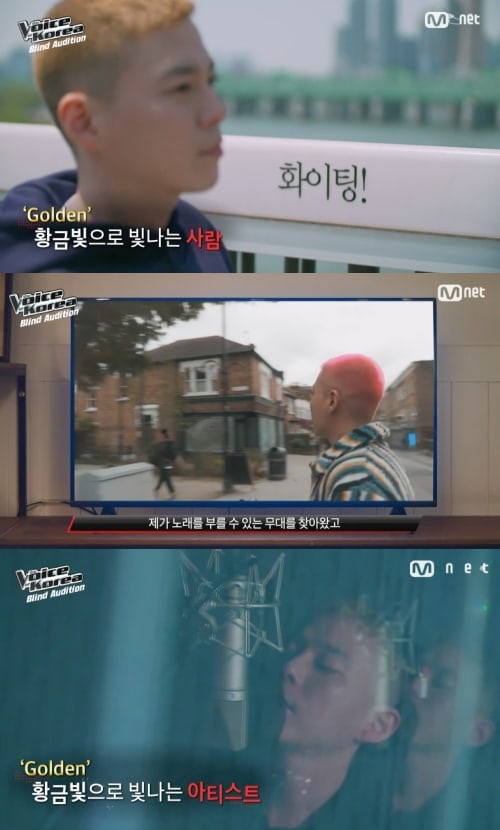 At the audition, the coaches began to persuade Kim Ji Hyun to join each of their teams. Regarding what he wants to get out of his participation on the show, Kim Ji Hyun explained, “I want to grow a step further. I’d like to learn a lot and promote actively.”

BoA said to everyone, “It’s my first time seeing him on a show. I wish I could change my spot with his. I’d like to learn from him instead.” She then told Kim Ji Hyun, “I will help you by telling you the hard truth.”

Despite the other coaches’ efforts to bring Kim Ji Hyun into their teams, Kim Ji Hyun chose to join BoA’s team. He shared, “I was hooked when she said she’d tell me the hard truth. That’s what I’d like to hear.” Backstage, he revealed, “I used to be a huge fan of BoA. I’m very honored. I hope she’ll give me lots of honest advice.”

Watch Kim Ji Hyun’s “The Voice of Korea 2020” audition below!