TWICE’s Jeongyeon revealed that a neck injury affected her ability to practice for the group’s comeback.

During a live broadcast on V Live on June 8, a fan asked Jeongyeon if her neck is alright. She responded that part of the reason she’d turned on a live broadcast was to talk about this, and she explained that she hadn’t spoken about it because she hates it when their fans ONCE see her in pain. However, she knew they’d realized something was wrong with her neck as she’d been wearing pain relief patches.

“While we were filming the ‘MORE & MORE‘ music video, I felt a numbness that went all the way to my ear,” she said. “So I thought I’d better go to the hospital again — I went there a few times in the past and they’d told me everything was okay.” She went to a specialist hospital this time, and they told her that she had a herniated disc in her neck.

“We found this out a week before the comeback,” she said, explaining that she’d had a procedure done. “To elaborate, I was in the hospital too and so I really wasn’t able to practice for this comeback. I could hardly practice at all.”

“I really hated the thought of showing ONCE an imperfect performance,” she said. “You understand how I feel, right? So after I discussed with the company, we asked the networks for their understanding and talked to them about not filming fan cams for me.” When artists perform on music shows, networks sometimes film “fan cam” videos that focus on individual members.

“That’s why there weren’t any fan cams for me, you guys,” she said. She shared that she’d felt very sorry towards both the fans and network staff when she saw people blaming the networks.

“I’m doing a lot better now,” she added. “I went to the hospital this morning and got a shot. So you don’t need to worry about me, for real. I’m working hard to get better.” 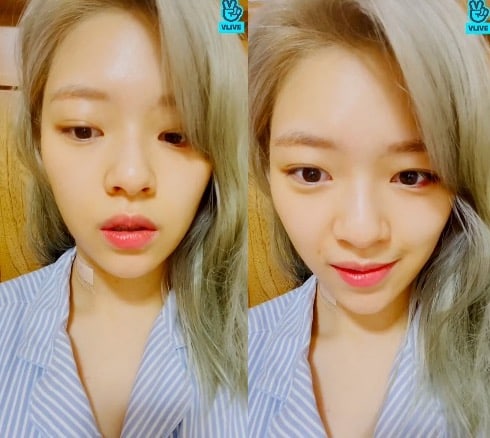 TWICE made a comeback on June 1 with their mini album “MORE & MORE” and title track of the same name, and they quickly topped charts in Korea and around the world.

TWICE
Jeongyeon
How does this article make you feel?