On June 5, Shin Hye Sun sat down to talk about her role in the upcoming film “Innocence,” working with veteran actress Bae Jong Ok, and more.

The actress, who started off her career with minor supporting roles in dramas “School 2013” and “Oh My Ghostess,” has risen to popularity through the KBS drama “My Golden Life.” Now, she is taking on her first starring role in a film. Shin Hye Sun commented, “It was very burdensome, and I was really nervous.”

She then added, “I’m doing what I’ve dreamed of ever since I was little, and I’m taking on a lead role, so I can only express how I feel with the words, ‘This is really nice.'”

“Innocence,” which premieres on June 10, will tell the story of a lawyer named Jung In (Shin Hye Sun) trying to prove her mother’s innocence and uncover the secrets of a small village with the help of the local mayor (Heo Jun Ho). Her mother, Hwa Ja (Bae Jong Ok), was accused of murder after the rice wine was poisoned at her husband’s funeral, but she is suffering from memory loss and cannot defend herself.

Shin Hye Sun commented on the similarities between her role as Jung In in “Innocence” and her character Young Eun Soo in the 2017 drama “Stranger,” who both work in the legal field and desperately try to save their parents. She said, “As soon as I saw the film scenario, I thought that I couldn’t help it if there was a similar feeling since the characters themselves are similar and the person acting the role is the same.”

Shin Hye Sun continued, “I tried to create differences through the details. Eun Soo is a lady from an aristocratic household while Jung In is someone who comes from a poor home environment and has studied like mad. I think that Jung In has a greater inferiority complex and sense of trauma.” 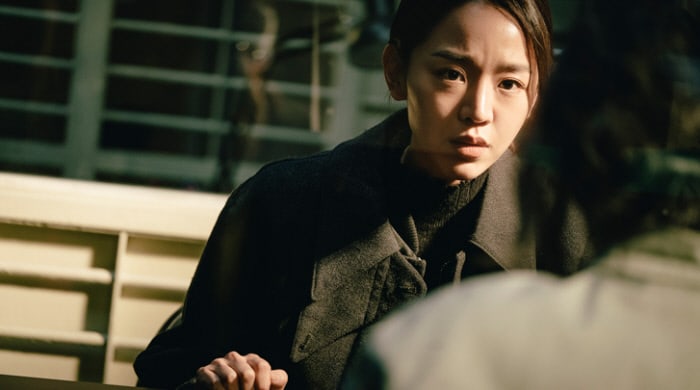 Although “Innocence” claims to be a film about the pursuit of a mystery, the story does not flow as urgently as expected. The process of revealing the secrets is rather calm, and the focus is on the history of the characters rather than the current conflict. In the second half of the film, the relationship between Hwa Ja and Jung In comes to the forefront. The director of “Innocence,” Park Sang Hyun, had initially planned to write a story about a mother and daughter but by chance encountered a story about a murder by poisoning and combined the two stories to complete his film scenario.

Shin Hye Sun remarked, “Like the title of the film, Jung In’s goal is to prove her mother’s innocence, but after reading the scenario, that was not all. The film involves several things including the story of a mother and daughter, the emotions between them, and Jung In’s unexpected decisions.”

She continued, “I had a hard time at first because I couldn’t really understand Jung In’s emotions. Toward the second half of the film, her emotions become a little different, and that didn’t work out well for me. But as I filmed with Bae Jong Ok, I began to gradually understand my character more.”

Shin Hye Sun elaborated on her experience acting alongside veteran actress Bae Jong Ok, whom she had met for the first time. “At first, I felt pressured, but after we started filming, she seemed like a real mom to me. I received both physical and emotional help from her, and I thought several times that I need to model myself after her innocent passion.”

She added, “Bae Jong Ok mentioned a few months earlier that she wanted to try comedy next, and I got to meet her again right afterwards in the tvN drama ‘Queen Cheorin’ (literal title), which is strongly comedic in nature. That was interesting, and I think it fits her well.”

Next, Shin Hye Sun talked about how she chooses her roles. She said, “It’s good if the whole project itself is fun, but since I am still a newbie, I can’t look at every little detail of the project. I have mainly chosen works that seem fun for me and will make my passion burn.”

As a final thought, Shin Hye Sun advised, “If you are going to see “Innocence,” I hope that you always wear your mask and practice social distancing.”