Exclusive: MAX On What To Expect In His New Album, Collab With BTS’ Suga, Friendship With DAY6’s Jae, And More

American singer-songwriter and actor MAX sat down for an interview with Soompi!

Well-known for his breakout hit “Lights Down Low” (feat. Gnash), MAX is excited to bring his new album “Colour Vision” to the world in September, and he has already released five songs off the album as singles, including “Love Me Less” (feat. Quinn XCII), “Acid Dreams,” “Checklist” (feat. Chromeo), “Where Am I At,” and “Missed Calls” (feat. Hayley Kiyoko). MAX thrilled fans by revealing that one of the songs on his new album will feature a Korean artist, but their identity is being kept a secret for now.

Over the years, members of Korean groups including BTS, SEVENTEEN, and DAY6 have shown their love for his music, and MAX’s friendly response to their support has sparked interactions between MAX and Korean artists both online and offline—eventually leading to MAX’s collaboration with Agust D (BTS’ Suga) on the track “Burn It” from Agust D’s new mixtape “D-2.”

Read on to learn more about MAX, his upcoming album “Colour Vision,” and his thoughts on Korean artists and music!

Could you describe your process of making music? What’s the fastest time you’ve created a song, and the longest time it’s taken from start to end?

Great question. For me it usually starts with a story that I want to dive in and write about, then I play around with the melody usually with a chorus first, and then the lyrics start to unfold and the rest of the song fills in. Fastest I’ve written a song that I actually loved, probably an hour between writing it and recording it. Longest might be “Love Me Less,” which we rewrote the verses for three times, and in total the song took a year to finish fully. 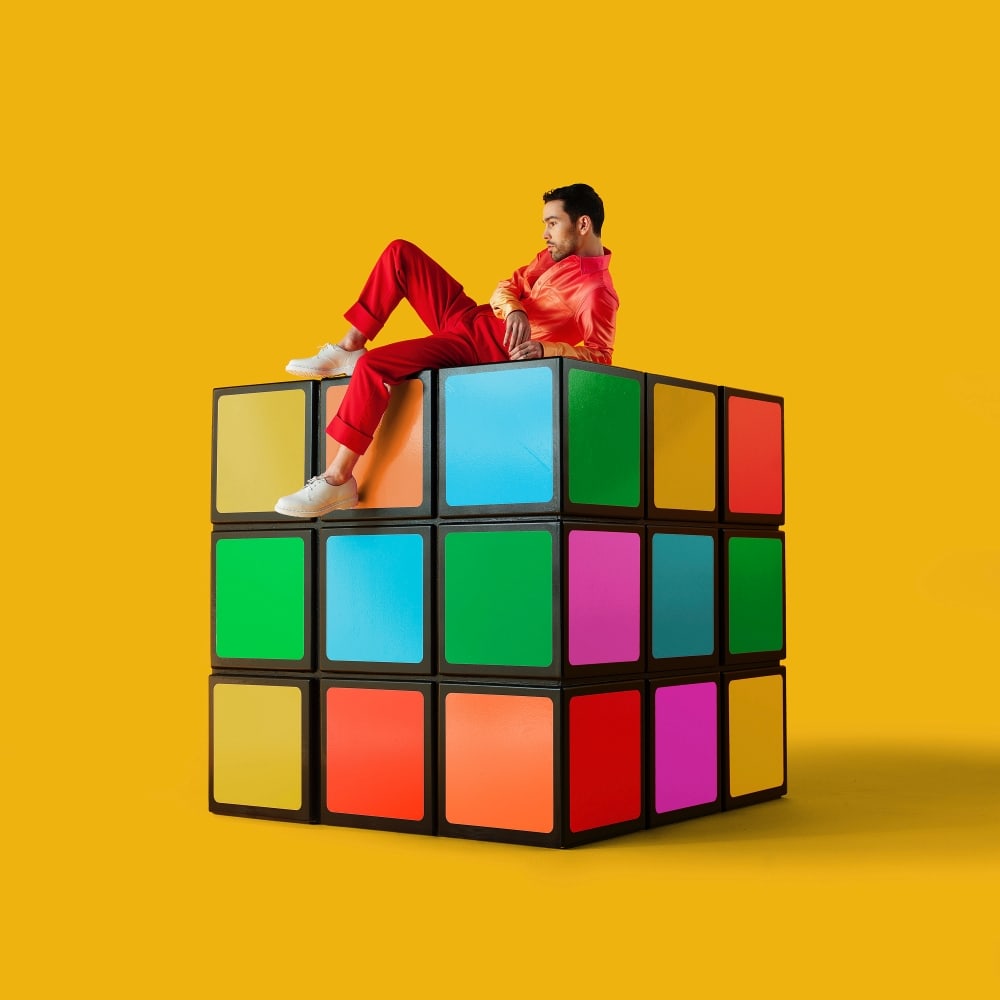 You’ve probably answered this question a countless number of times already, but for the sake of our readers—tell us all about your upcoming album “Colour Vision.” What is the message or theme behind it? How is it different from your past releases?

A question that never gets old because I’m so excited for everyone to hear it in its entirety. The theme is definitely reawakening and rebirth. The majority of the album including its color theme of yellow came after I was silent for four months. Finding my voice again and truly overcoming the adversity of feeling like I had hit rock bottom really brought a sense of optimism and new energy and hope through the color yellow. It’s different than my past releases mainly because of how cohesive I feel it is in comparison to “Hell’s Kitchen Angel,” which felt more like a collection of songs I was proud of rather than a body of work that really flowed from start to end.

The release of “Colour Vision” has been postponed. Are you making any changes to the music, or are you leaving the album the way it was meant to be released originally?

I’ve actually made a few tweaks here and there since we postponed the release, but overall it’s the same structure and song selection.

Out of all of your songs, what song do you love to perform the most? Or what song off your new album are you the most excited to perform?

“Love Me Less” is definitely a true JAM live. I love the immediate energy shift in a room when the crowd hears those initial piano bumps. “Acid Dreams” was pretty incredible especially on our Asia tour. There’s a song on the album called “Working For The Weekend” and I am ECSTATIC to finally play that one live. I’ve got some high hopes for the crowd reaction to that one.

You’ve teased on social media that “Colour Vision” will have a song featuring a Korean singer. Any spoilers you could give us? If you can’t specify who it is, could you describe what it was like to work with that artist?

Oooooo I do love to tease, and I know the fans hate it haha. It was incredible to work with this artist. We spent a while figuring out the perfect song on my album to have them on, and I think they really picked the right one to add their story to. They are just as particular as I am with everything they do, and that bonded us right away. I think the fans will be very, very, very, very, very happy with who it is.

What did your experience with discovering K-pop look like? When did that happen, and what was it about K-pop that got you hooked?

My first real experience with K-pop was about four years ago when Jungkook sang my song “One More Weekend” on a V Live, and I saw things just explode. That definitely kickstarted my journey into becoming a true ARMY. In the years after, Jungkook and Suga both gave love to different songs of mine, and I expressed my gratitude and vice versa with their music. I think it really all sank in the most after I visited Korea in January though. That’s when my palate for Korean and K-pop music broadened to loving other artists and songs like DAY6, SEVENTEEN, and Zico. 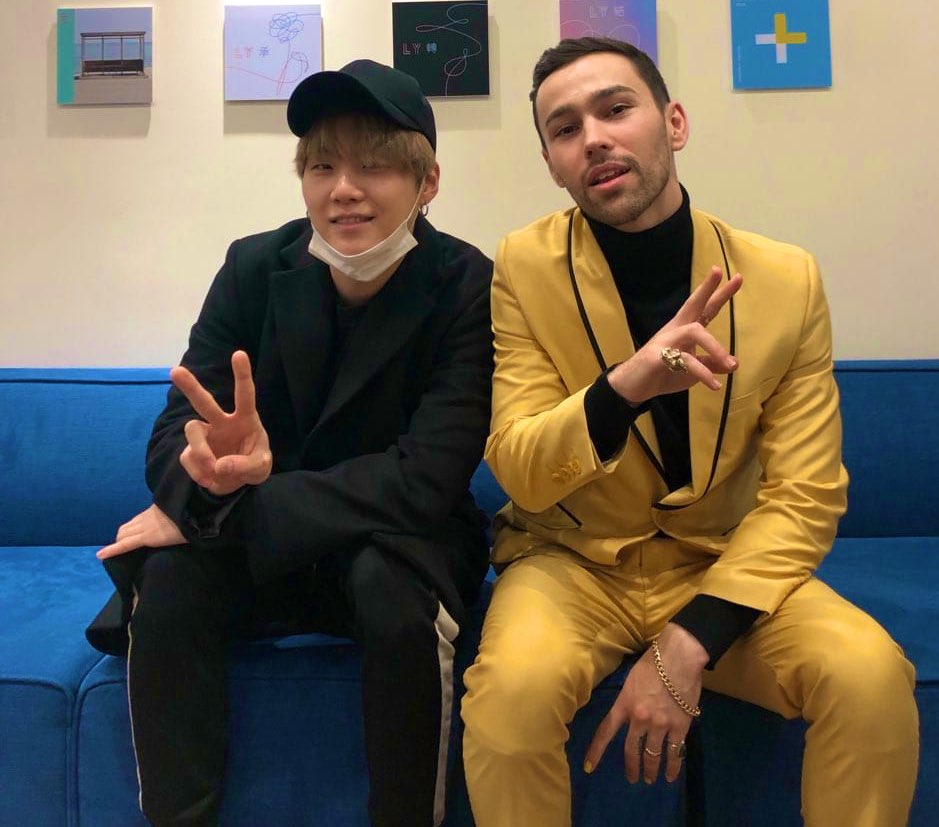 We know you’re quite close with BTS’ Suga. How was the whole process of getting to know Suga? Did you get to meet any of the other BTS members?

We met when I went over to Korea in January for the first time. I was actually supposed to meet him and Jungkook, but Jungkook was really sick that day, so I ended up just meeting up with Suga at Big Hit. I thought I’d just meet him, say thank you for the love on my music, and take a picture together or something, but we hit it off right away on a much deeper level. He was so welcoming and kind. His main A&R* sat with us and just translated our whole conversation in real time, which made it feel like we were just speaking the same language seamlessly. We talked about our mutual obsession with basketball, music of course, food, just everything. One of those people you don’t even have to try to make conversation with; it just flows naturally. I ended up bringing him to his first basketball game ever in LA a few weeks later, which was the Kobe Bryant tribute game. Just watching how excited he was the whole game on the edge of his seat was so amazing. It felt like I was seeing my first basketball game again because of how special it was for him. Sometimes you just know someone is a forever kind of a friend right away, and that’s how it was with Suga from the start. I love that we’ve gotten to work together and that I get to call him a true friend.

* A&R (artists and repertoire) is the department of a record label responsible for talent scouting and overseeing the artistic development of its artists and songwriters.

How did the “Burn It” collab come about? What did the process look like? Tell us all about it.

It was such a unique process for me. Suga sent me over the song, and the chorus was just a melody, no lyrics. The rest of the song was all in Korean of course. Suga asked me to write my own chorus in English but with a similar melody that was on the demo and with the theme of the rest of the song. So I spent a few days with my friend AM!R working the right words into the melody Suga had. Then we recorded it and over the next few months—we actually recorded it probably four more times in higher keys to get the most energy out of the vocal. After a few months we finally nailed it, and honestly the final, final version wasn’t done until about a week before the release, which was amazing.

You’ve mentioned Zico as an artist you’ve been inspired by. How did you discover Zico’s music? Any specific tracks that you particularly like?

Right after I left Korea, I had a new love for all Korean music. I just really immersed myself in the culture. I heard “Any Song” and was instantly hooked. It’s just an infectious jam. I actually reached out to him to say I loved the song, and he messaged me back saying he loved “Acid Dreams,” which was cool.

We are aware that you are somewhat acquainted with DAY6’s Jae and Young K. Do you know them personally? What did you think of Young K’s cover of “Love Me Less”?

Yeah Jae and I have been texting back and forth for a while now. We were introduced to each other through a mutual friend and have been super friendly since. We have a lot of very deep text conversations. Jae is the one who texted me Young K’s cover of “Love Me Less,” and I was blown away. He’s got a wonderful voice. So, I sent Young K a message to thank him, and he was very gracious. It’s truly wonderful when you become friendly with people who you also respect for their talent.

Last question. What do you do during down time that’s just for yourself?

Well I hang with my little one-eyed dog Wink a lot, I play League Of Legends a bit too much, I watch basketball, I have a strange addiction to watching “The Bachelor” and “Brooklyn 99,” and I love trying cold brew coffee from different coffee shops.