Gary uploaded photos on his Instagram that show himself and his son Hao enjoying some summery relaxation together!

Hao beams as he and Gary dip their feet into a river, the father-son duo plays together in the sand, and Gary smiles at his son as he cooks some meat for them. He wrote as the caption, “A set of three photos of extreme travel childcare,” and he included an emoji of two parents and a child.

Someone commented on the post, “I’m suddenly curious about something. Hao’s father, what has our old soul Hao said when he sees the tattoos on his father’s arms? I’m so curious to know what language genius Hao might have said.”

Gary replied with some symbols for laughter and wrote, “Since he’s seen my tattoos since he was born, he’s used to them and so far he still likes them!!” 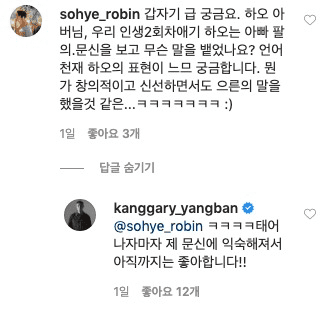 Gary also recently shared a video of Hao helping get their campsite set up. Gary wrote in the caption, “Pro camper” with a thumbs up. He shared some pictures from their adventure together too.

Gary and Hao currently appear on the popular KBS2 reality show “The Return of Superman.”