Sung Dong Il had many exciting reunions during the premiere of tvN’s new variety show!

On “House on Wheels,” the cast will build a small, portable home to live in while traveling across Korea and inviting guests over. The program follows the global “tiny house” trend where people live on the road with only their essential belongings for a minimal, environmentally friendly lifestyle.

The first to check out the cast’s new camping car were Sung Dong Il’s children, Jun and Bin. The two first came into the spotlight when they appeared on “Dad! Where Are We Going?” from 2013 to 2015, and they surprised viewers with how much they’ve grown. Jun revealed that he is now 15 years old (in Korean age), while Bin is already 13. 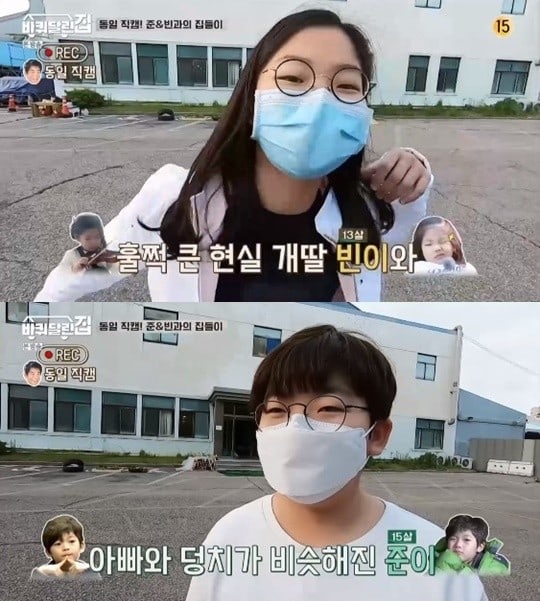 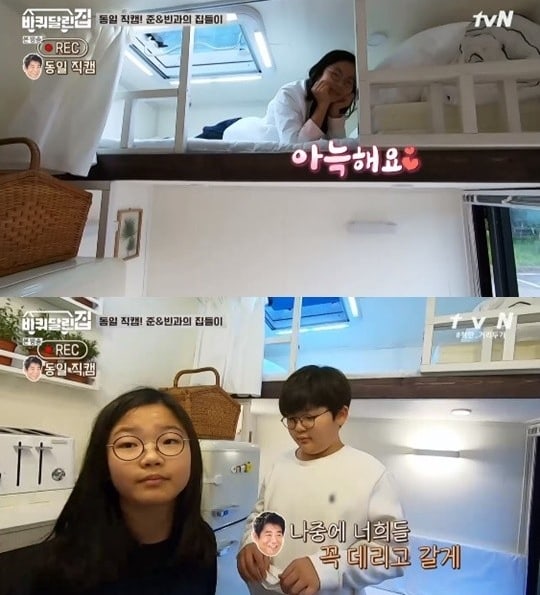 Sung Dong Il introduced his new home to his kids, saying, “This is a space where you can assimilate to nature.” Bin commented, “It’s like a cabin. It’s cozy. I think I’d be able to live here forever.” Before heading off, Sung Dong Il promised, “In the future, I’ll take you guys with me on vacation.” 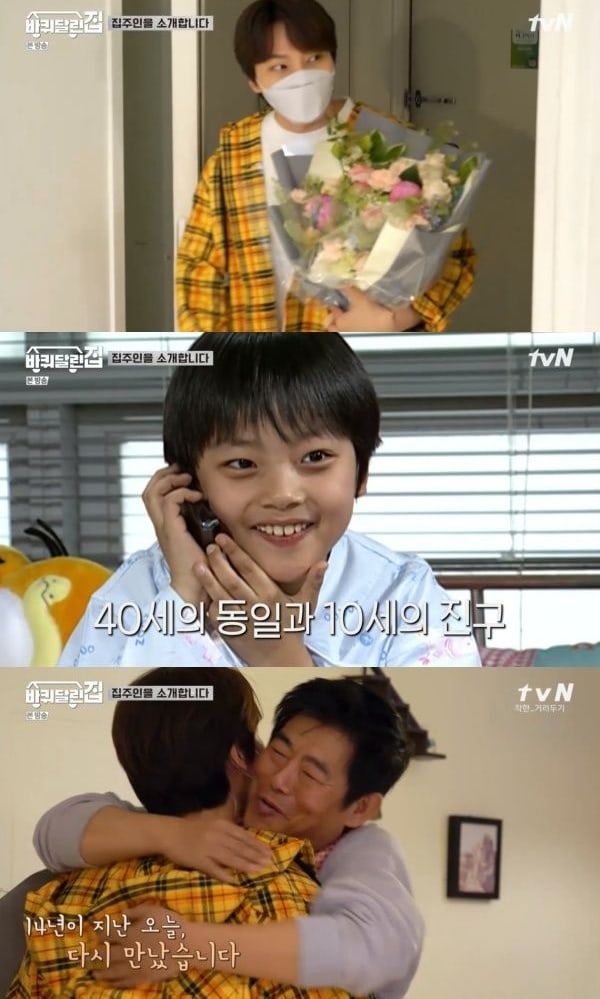 In order to drive their camping car, Kim Hee Won and Yeo Jin Goo had attained special driver’s licenses. Sung Dong Il, however, cracked everyone up by revealing he had failed his test.

The trio’s first destination was a beach in Gangwon Province. Later, they were joined by the show’s first guest, Girl’s Day’s Hyeri. Hyeri, who appeared as Sung Dong Il’s daughter in “Reply 1988,” was greeted happily by her on-screen father. 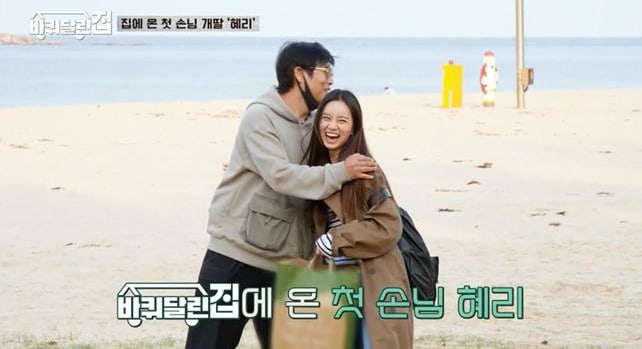 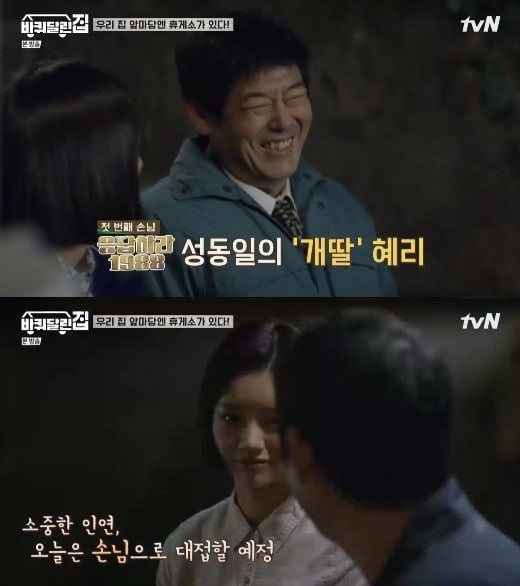 Hyeri examined their new home, saying, “It’s nicer than I thought. But it’s smaller than I thought.” She also presented them with a gift, adding, “If you don’t like it, I’m going to take it back. Give me a good reaction.” Her gift turned out to be board games, and Kim Hee Won and Sung Dong Il hilariously gave forced reactions to please their guest.

She adorably complained, “Dad, I’ve aged a lot now,” to which Sung Dong Il adorably replied, “Don’t say stuff like that. You’re still always going to be my daughter.”

Yeo Jin Goo responded while brushing back his hair, which Sung Dong Il amusingly caught, teasing him by saying, “Since Deok Sun is here, Jin Goo is brushing his hair back and caring more [about his appearance],” calling Hyeri by her “Reply 1988” character’s name. He continued, “Are you slowly resembling Hee Won?” 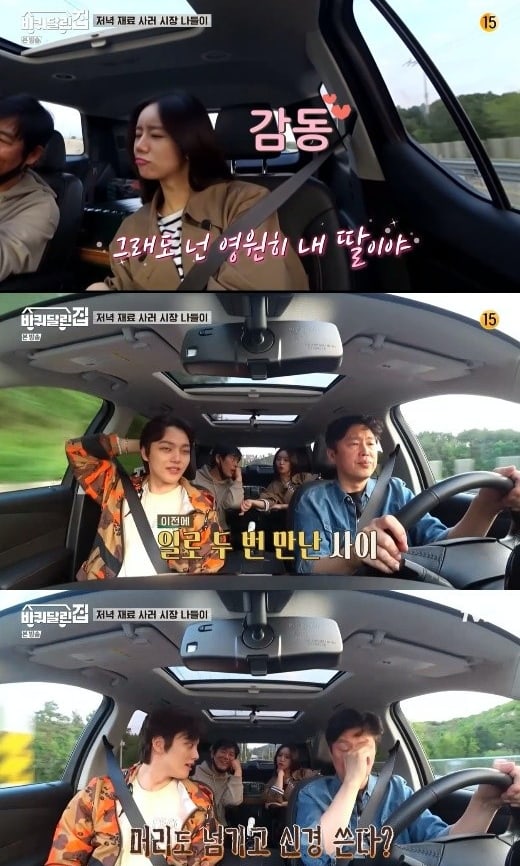 Caught off guard, Yeo Jin Goo hilariously responded, “You’re making me embarrassed, why are you doing that?”

The second guest of the episode was Ra Mi Ran, another co-star of Sung Dong Il and Hyeri from “Reply 1988.” The actress shared her camping knowledge of 10 years, skillfully assembling a mini brazier. 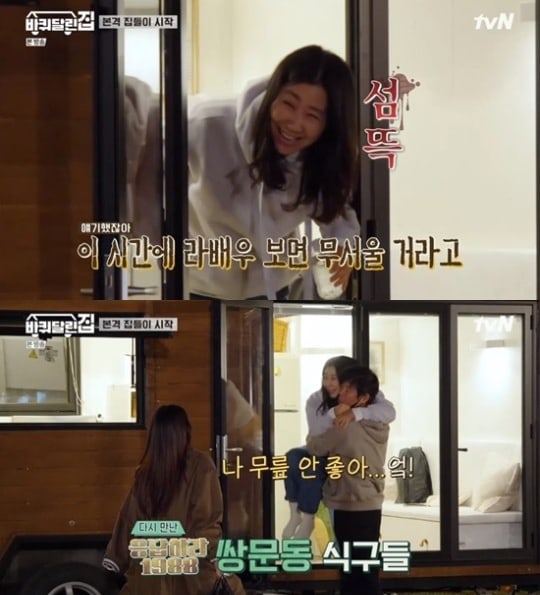 The stars all got to work on dinner, with Yeo Jin Goo attempting to make red pepper paste stew after sharing that he had learned to cook before the show. Despite his two hours of effort, his stew was met with comments like, “Every spice in the world is in here except curry” and “You put in beef but it tastes like seafood.”

To make matters worse, water began to leak from their toilet, and their car began making noises. Yeo Jin Goo’s homemade traditional rice drink also began leaking from his bag, and the remainder had gone bad. Sung Dong Il cried out, “Is this healing?!” before apologizing to Hyeri, saying, “I didn’t know I’d be calling you to war.”