Watch: Uee Shows Off Pole Dancing Skills And Talks About Stress She Received From Hate Comments On “Home Alone” (“I Live Alone”)

On the June 12 broadcast of “Home Alone” (“I Live Alone”), Uee appeared as a guest to give viewers a peek into her everyday life!

Uee, who has been living alone for three years, explained that her house was decorated by her mother. She commented, “When I moved, since I was in the middle of filming a drama, I had my mom take care of the interior design, so everything is her taste. I don’t have any interest in interior design, so it’s just been three years living like this.”

After eating breakfast, Uee headed off to practice pole dancing. She shared, “There was a time we did pole dancing for After School. To be honest, I felt so regretful [about the performance] because I had so many individual activities at that time. After my drama ended, I wanted to properly learn, so I’ve been learning diligently.”

The cast expressed amazement at her skills, and Park Na Rae commented, “You received so much love when you debuted because of your ‘honey thighs,’ but then people started to worry when you suddenly lost a lot weight while appearing in dramas. But after watching today’s video, it seems like you are very healthy.”

Uee responded, “In After School, all the members were slim and tall. When I first went in, I did receive love for my ‘honey thighs,’ but that wasn’t all. Since it hadn’t been too long after my debut, I received a lot of stress from hate comments.”

She continued, “During ‘Bang!’ since our outfits were crop tops and people were commenting on my belly fat, at such a young age, I felt really hurt. I was around 21-22 years old (in Korean age) at the time, but I cried a lot, thinking, ‘Do people really care that much about my body?’ and ‘Doesn’t everyone have this much?’ 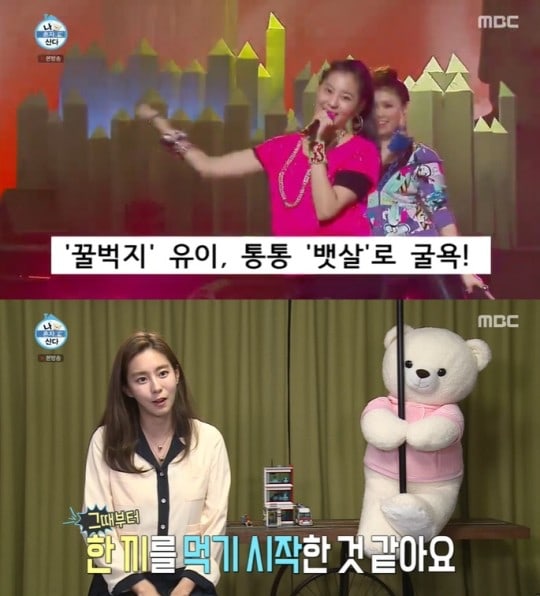 Uee then shared how these comments later turned into questions of why she had lost so much weight and speculation that she had anorexia when she began appearing in dramas. She explained, “At that time, I was playing a sick patient in a drama, and I was not eating in order to lose weight for the role. I filmed a lot of crying scenes and intense scenes, so I began only eating one meal a day. I think I spent eight years doing that.”

She explained the mental confusion this caused for herself, saying, “The roles where I played sick patients did the best. So I think I began to mistakenly believe, ‘Do they prefer when I look like that?’ Eventually I thought that I had to take care of myself. I missed out on my own happiness.”

Son Dam Bi resonated with her story, commenting, “Once I also lost so much weight that I was at 44 kilograms. ‘Anorexia’ also became one of my associated search terms, so I began changing after that.”

Lee Jang Woo, who previously worked with Uee in the drama “My Only One” shared, “I remember her having a hard time. When we were filming, there were scenes where she had no choice but to eat, and she would immediately experience indigestion.”

He continued, “Now, I think she’s changed a lot. In the past when I would see her, she wouldn’t be able to eat much and didn’t talk much. Even though I was aware of the situation, it’s such a relief that she was able to overcome it on her own.”

After finishing up her practice, Uee went home to hang out with her dog Mango. She ordered spicy baby octopus for dinner with extra hot sauce, surprising the cast with her tolerance for heat, and then enjoyed ice cream for dessert.

At the end of the day, Uee shared, “To be honest, I was so lonely. I didn’t know how to live on my own, and I felt a little lonely, bored, and scared. After discovering some methods, I wonder if living alone is actually fun, not boring, and happy. I’m going to find some fun with Mango.” With a big smile she added, “I’m trying not to get married within the next three years.”

Uee’s appearance on “Home Alone” will soon be available on Viki. While you wait, check out last week’s episode below!

If you haven’t already, watch Uee and Lee Jang Woo in “My Only One” here!

Uee
Home Alone
How does this article make you feel?