Beyond the Korean peninsula, problems arise between the United States and China as well as with Japan’s economic sanctions in “Steel Rain 2,” extending awareness about the fate of the world. In the new poster, the three leaders sit across from one another as the North Korean director of the guards watches over them. The leaders all share the same goal to end the 70-year war with a peace treaty, but they all have different desires, including the North Korean director. What will become of the leaders who tensely confront each other ahead of an impending war? 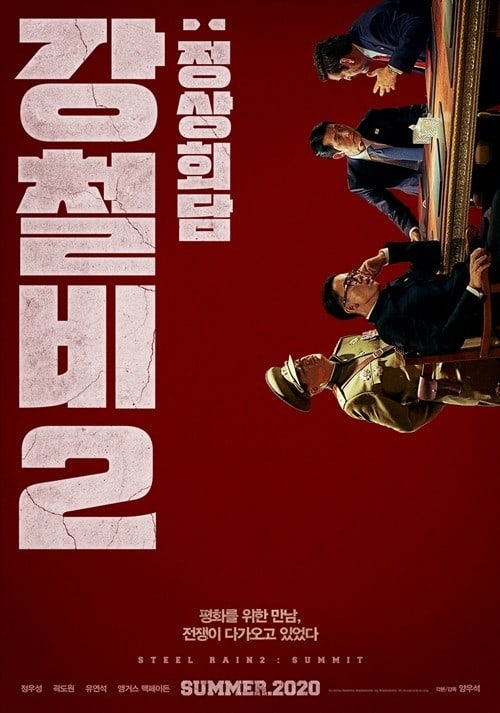 The accompanying teaser for the film begins with the summit meeting and the moments after the confinement of the leaders in the North Korean submarine. The teaser also captures the intertwined interests of each country during an undersea war in the coastal waters of Dokdo (the Liancourt Rocks).

While the leaders of North Korea and the United States confront each other tensely with different interests, Jung Woo Sung is seen trying to persuade both sides as the South Korean president. Meanwhile, Yoo Yeon Seok takes on a shocking transformation as the North Korean chairman, noticeably through his sharp eyes and fluent speech in the North Korean dialect. Additionally, Kwak Do Won, who had showed off good chemistry with Jung Woo Sung in the 2017 film, will be joining the actor in a new confrontation about war and peace.

Jung Woo Sung’s line at the end of the teaser, “I’m the South Korean president Han Kyung Jae,” leaves a strong impression, making viewers curious about how the summit will end.