On the latest episode of “Running Man,” the cast members learned a little more about each other’s past love lives!

During the June 21 broadcast of the SBS variety show, the members played a game in which they had to confirm or deny stories sent in about them by viewers.

Yoo Jae Suk was the first up, and the other members started laughing as they read his file. When Ji Suk Jin read aloud that the story was sent in by someone named Park Hyung Man, Yoo Jae Suk exclaimed, “Hyung Man is a close friend of mine,” and everyone laughed, “So the story is true!”

After Yoo Jae Suk explained that Park Hyung Man was one of his best friends in high school, Ji Suk Jin continued reading, “My story is about the location of Yoo Jae Suk’s first kiss. We were in our senior year of high school, and it was sometime between spring and summer. The location was a secluded overpass in the neighborhood of Sadang. I remember he told me all about it at the school store the next day.”

Yoo Jae Suk laughed in embarrassment as he confirmed the story, exclaiming, “[Hyung Man] has gone crazy! Are you really my friend, [exposing me like this]?” Ji Suk Jin went on to read aloud, “One more thing. Back in high school, after he broke up with his girlfriend, he gave me all the photographs, gifts, and letters he’d received from her and asked me to get rid of them.” 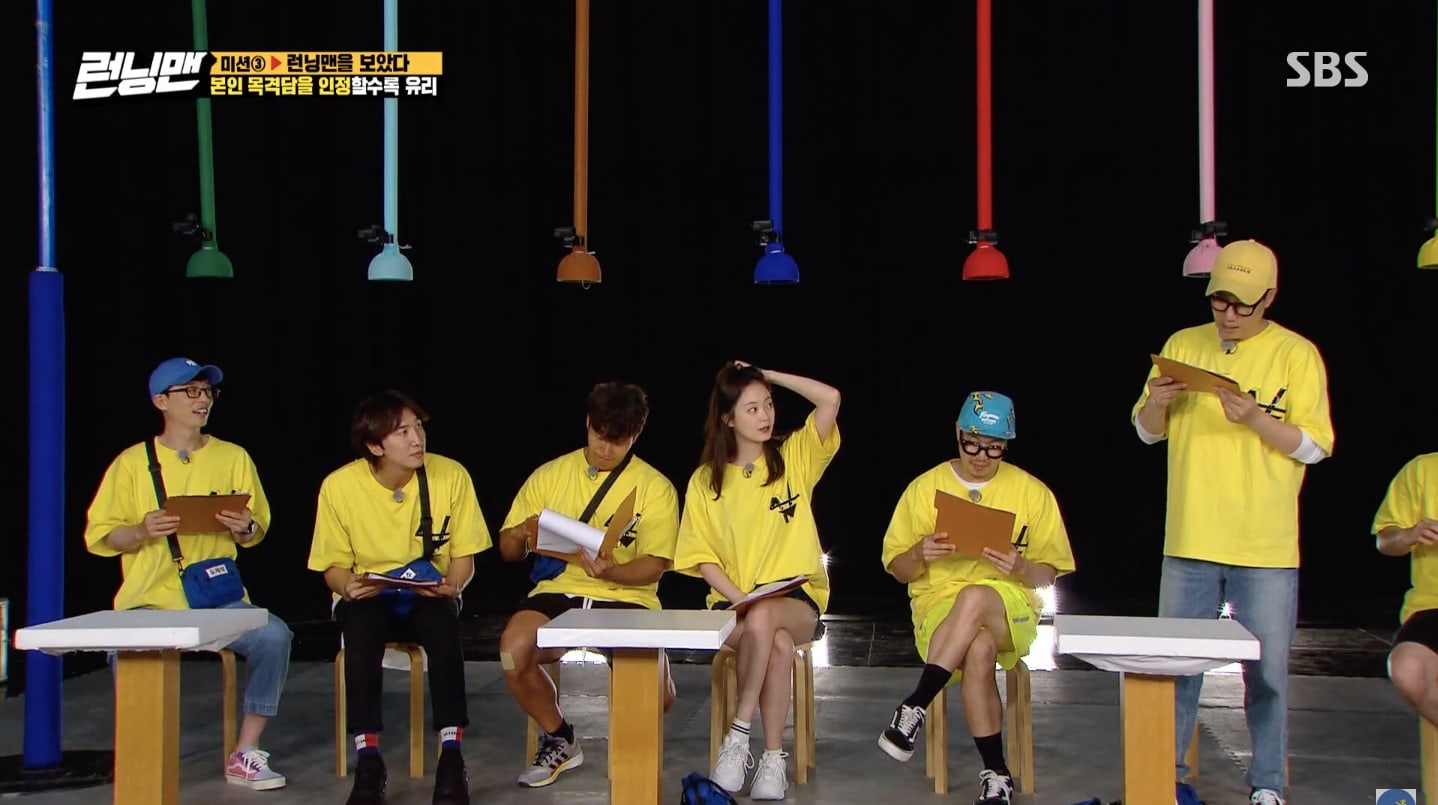 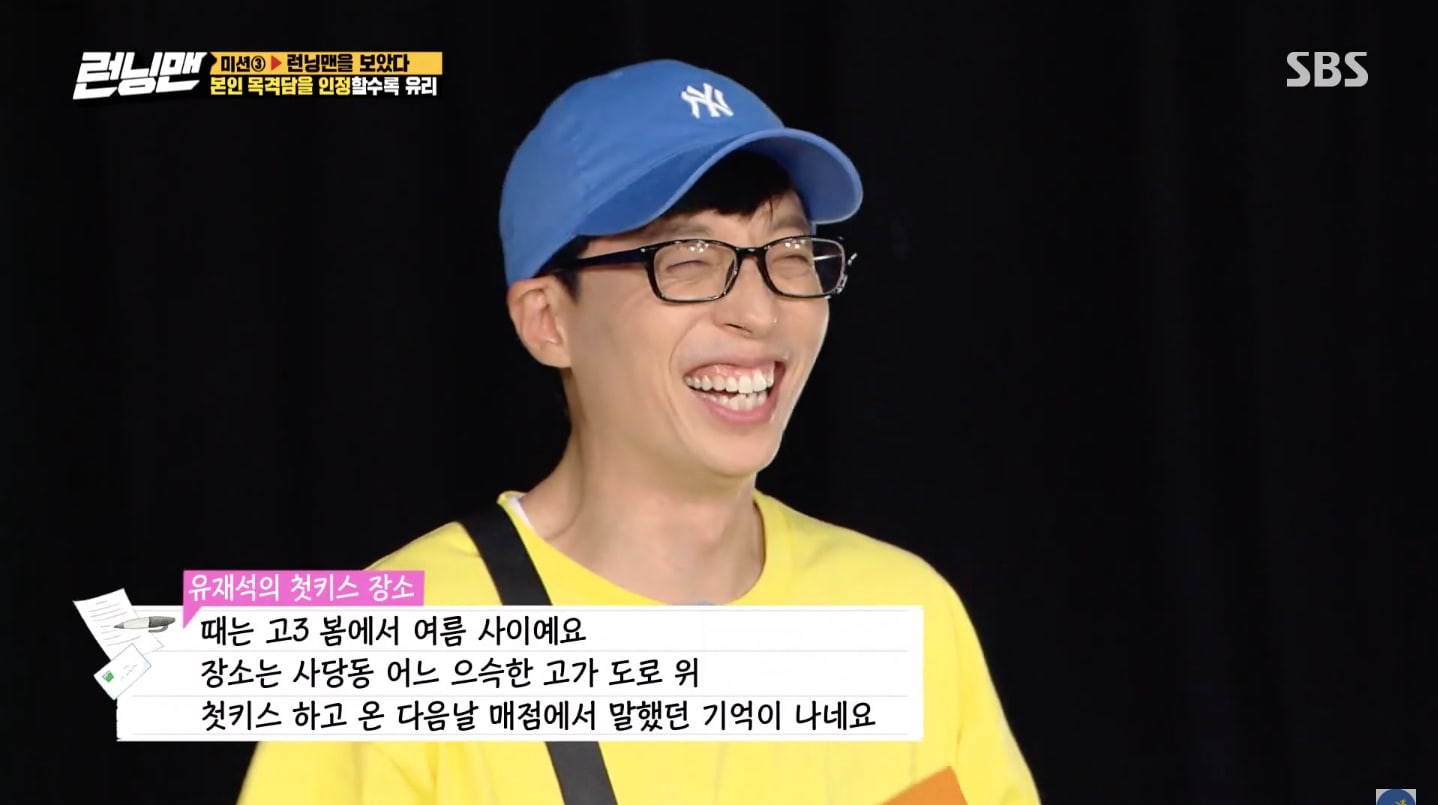 Viewers also sent in multiple stories about spotting Jun So Min out and about with potential boyfriends. For the first one, Yoo Jae Suk cracked everyone up by reading aloud, “Last winter, I saw Jun So Min at a cafe alone with a guy, just the two of them. Usually, when female celebrities go out with a guy, they at least wear a mask to cover their face, but Jun So Min had her entire face exposed, and it was actually the man who was hiding his face.”

Jun So Min confirmed the story, but said that because she has so many guy friends, she couldn’t be sure of who the man in the story was. She did, however, immediately recognize the guy described in the next story.

Song Ji Hyo shared, “This one also takes place in the Yongsan District,” before reading aloud, “About two years ago, I saw Jun So Min on the corner of a street behind an apartment building in Yongsan. She was wearing a cap pulled low, so I didn’t recognize her at first, but she was talking so loudly on the phone that I was able to recognize her from her voice. But her tone of voice was quite serious.”

She went on, “I’m not completely sure, but it seemed like she was fighting with her boyfriend. That’s what it sounded like. But in contrast to her angry tone of voice, the conversation sounded like a childish lover’s quarrel. She was saying, ‘Who should I hang out with, then? Hang out with me, too!’ I tried to keep a straight face as I walked by. Are you still seeing that guy?”

Jun So Min immediately replied, “To be exact, I broke up with that guy two years ago. I admit it. He was my boyfriend.”

However, when HaHa began reading another story about her from 2013, Jun So Min cut him off by exclaiming, “There’s more?!” She hilariously went on to rant, “I dated all these guys secretly. How does everyone know about them? This is driving me crazy.” Although HaHa chose not to read the rest of the story, he revealed that it was sent in by someone who had sat next to her at a musical.

Rising to her feet, Jun So Min complained, “How many boyfriends are going to appear [in these stories]? There have been three already!” She then confirmed the story that HaHa had been reading, declaring, “I’ll confirm it without hearing the rest of the story.” 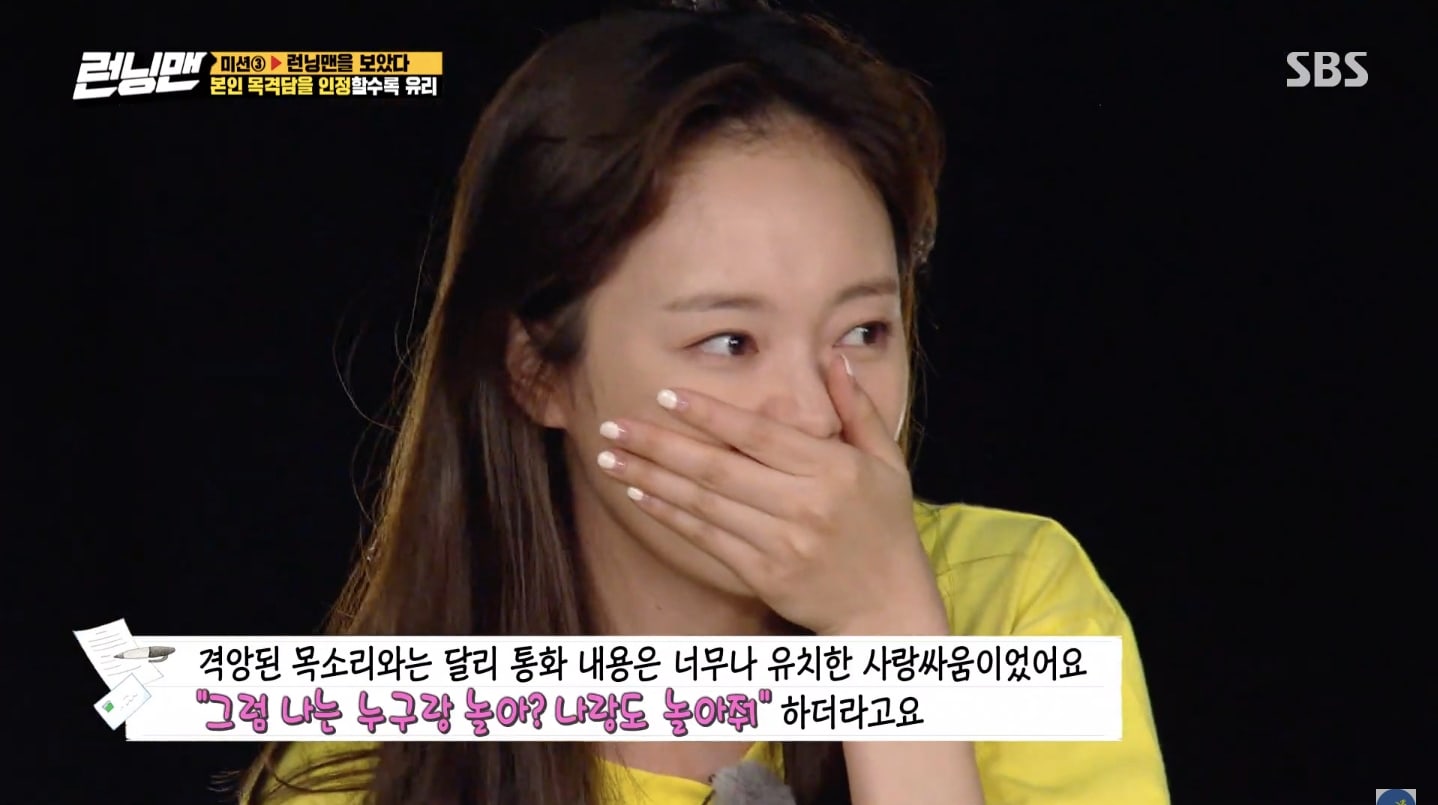 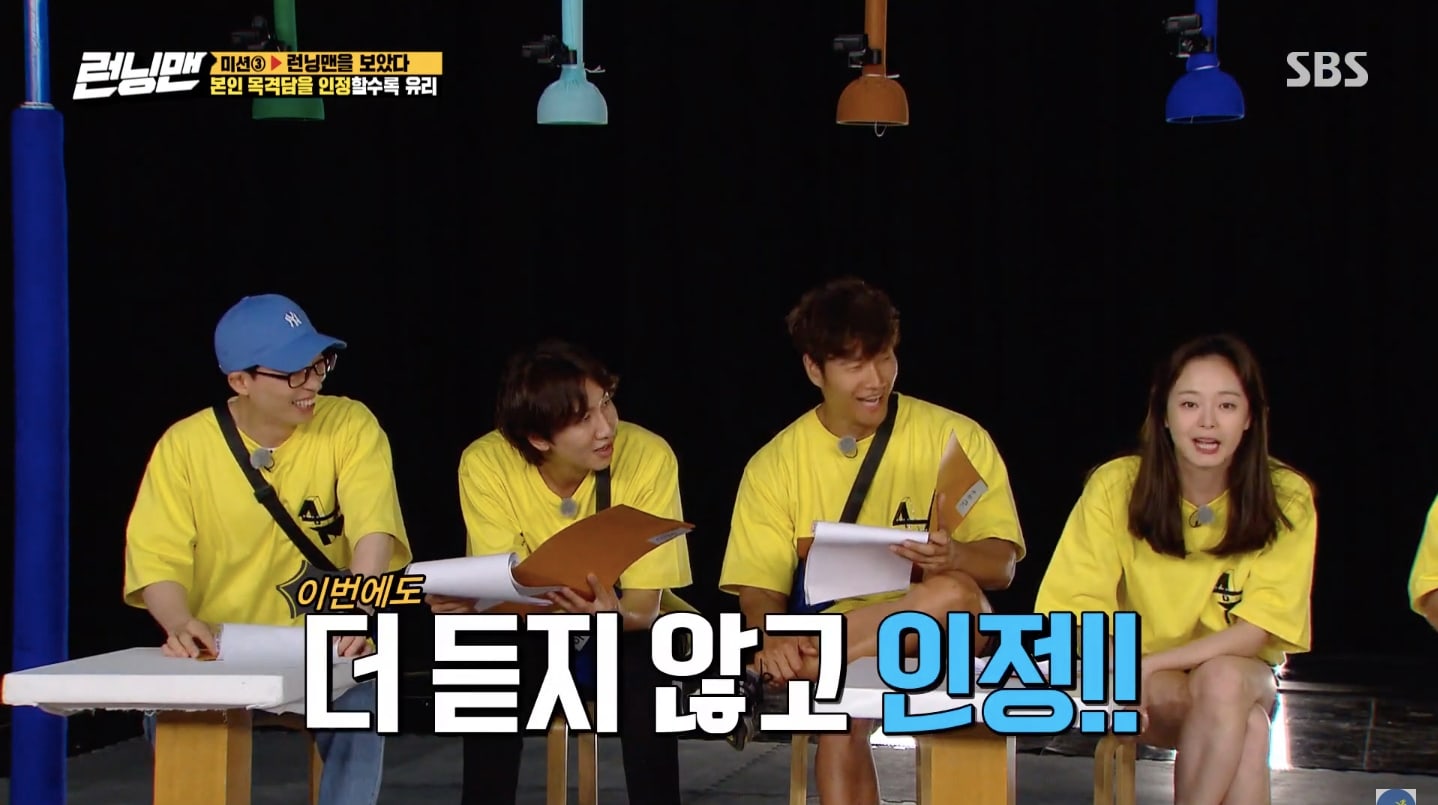 One viewer also sent in a story about seeing Kim Jong Kook on a coffee date in LA, writing that he had been with a beautiful Korean-American woman that seemed like his girlfriend.

Although Kim Jong Kook confirmed the story, he insisted that the woman was probably just someone he knew—though of course, the “Running Man” cast refused to believe him and leapt at the opportunity to tease him mercilessly. 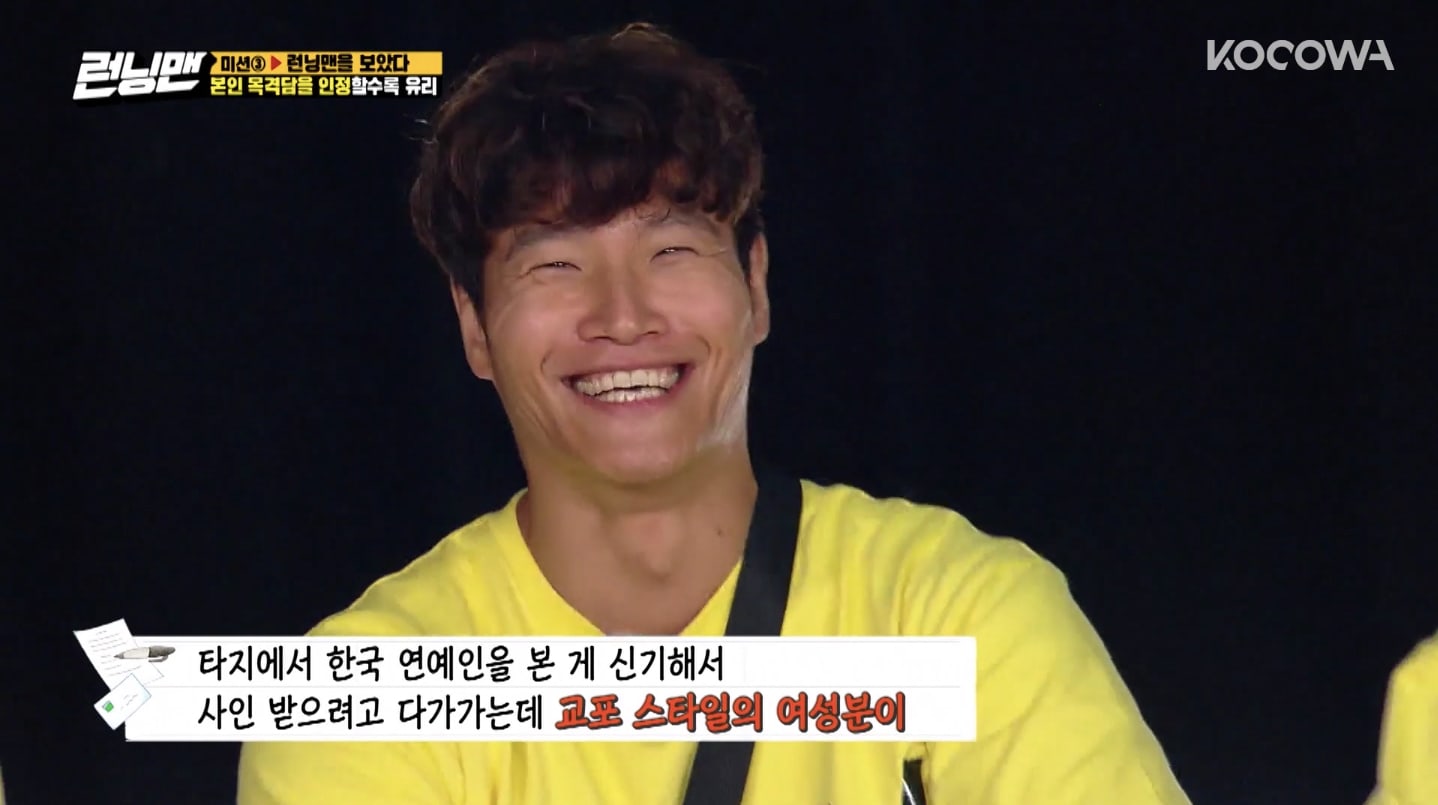