With the “I-LAND” premiere coming up this Friday, a press conference was held on June 24 for the new Mnet show.

“I-LAND” is described as an “observation reality program” that shows the creation of the next generation of global artists. It’s the first project by CJ ENM and Big Hit Entertainment’s joint venture BELIF+, and it follows trainees as they aim to be chosen for a new boy group.

The managing director stated, “This is a project that we’ve been preparing for three years. I’m happy to be able to show you the results of our three years of work.”

Regarding why he wanted to create this show, Jung Hyung Jin stated, “While I watched how K-pop artists are developing, there was something I wondered about. I thought about what the next generation of K-pop idols will look like, and what role Mnet will play in that. I then wanted to make a program that combined the know-how of Big Hit PD Bang Si Hyuk, who created top idols BTS, with Mnet’s content.”

When asked how the 23 contestants on the show were chosen, Jung Hyung Jin explained, “After CJ ENM and Big Hit launched BELIF+, we held casting auditions continually for three years. We looked for the next generation of K-pop artists not only in Korea but also in places all around the world, and the 23 contestants are the trainees that came through that process.” 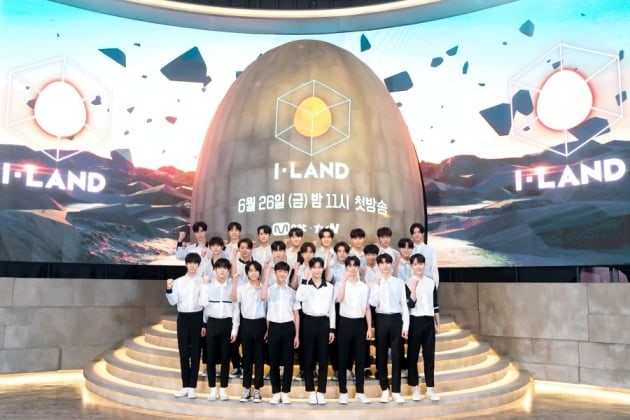 The three producers talked about taking part in the program. Rain said, “I’m happy and honored to be able to greet you through ‘I-LAND.’ I think I will learn a lot from working together with Mnet and PD Bang Si Hyuk. Although it won’t be taking place over a long period of time, I’m approaching this program with the intention of learning. Rather than my know-how or skills, I’m going to do my best to make this a beautiful program by being a producer that takes care of the mental state of the contestants.”

Bang Si Hyuk said, “I’ve been a producer for over 20 years, but this is the first time I’ve been on a show like this. I’m interested to see how the contestants will grow through the program. I’m going to help them so that they can become people who make choices and grow on their own.”

Zico commented, “It’s an honor to be able to take part in a meaningful project. I’ve been motivated by the fact that I’m able to work together with PD Bang Si Hyuk and Rain, as I’ve always admired them, and I’m approaching this with the intention of learning and experiencing something valuable.”

Bang Si Hyuk shared his deep confidence in Rain and Zico. He said, “Since Rain and Zico are fully capable as producers, I’m going to be focusing on the overall producing direction and evaluation direction, rather than the development of the contestants’ skills.” He also shared that has worked on the producing of test songs and performances.

When talking about what it’s like to film the show, Rain said, “The [level of skill] of current idols has increased, so having a normal amount of skill isn’t acceptable now. This is a program that solely aims to create advanced idols.”

In regard to the set, Rain said, “It’s such a state-of-the-art space that I was disappointed over how this kind of thing wasn’t around when I was a trainee. I was envious to the point that I wanted to apply too, and it’s a very mysterious and interesting space.”

Zico said, “All the trainees have potential, to the point that I’m watching over them all with anticipation.” He shared that he plans to help them develop their undiscovered potential and he will use his own experience in the field to improve their skills. 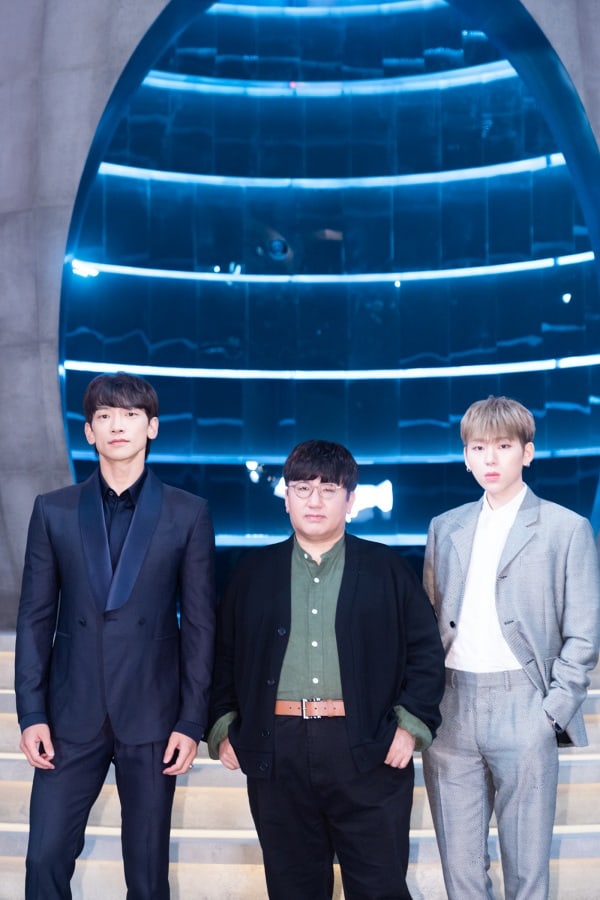 Jung Hyung Jin shared that international viewers will be able to take part in voting, and he added that several criteria will be involved in the evaluations on “I-LAND” rather than just votes. He also addressed concerns about the process following recent controversies over the vote manipulation in Mnet competition shows such as the “Produce 101” series.

“One thing I can say for certain is that we are doing many things to ensure fairness and reliability,” he said. “Voting will be carried out through Weverse, and not through Mnet itself.” He also said that outside observers are taking part in the voting process.

The director stated, “I’m confident that all of CJ ENM’s knowledge about content has been incorporated into this show. We’re aiming to gain back viewers’ trust through this show, and I hope you will look forward to it.”

Rain shared, “If you continually watch how a contestant develops, I think it will be a more interesting program for you and you’ll be able to see something interesting that’s different from other programs so far.”

In regard to the recent news that a contestant on the show had fallen off the stage and been injured, Jung Hyung Jin said, “I’m sorry that there was bad news ahead of the premiere. There was a fall on the filming set of ‘I-LAND’ at the end of May. We immediately did an examination of the set, added a safety fence, and recruited more production personnel as follow-up measures so that production could be carried out in a safer and better environment.”

“Our company is paying all the treatment costs for the contestant who was in the accident, and we’re discussing with the agency about various different support measures for after his recovery,” he said.

Jung Hyung Jin also shared that the final group from the show will be promoting under BELIF+ Entertainment. “The number of members and the process of choosing them is a crucial element of ‘I-LAND,’ so I’d be grateful if you find out about that by watching the show,” he said.

“I-LAND,” which also stars Namgoong Min as the show’s “storyteller,” premieres on June 26 at 11 pm. KST and will be available to watch on Viki.

Block B
Bang Si Hyuk
Rain
Zico
I-LAND
How does this article make you feel?