Jang Geun Suk participated in his first press conference since being discharged from the military.

On June 27, Jang Geun Suk held an online press conference to talk about his upcoming online fan meeting, what he’s been up to since his discharge, and more.

Regarding his fan meeting, he shared, “To be honest, we’ve been discussing performances and projects since last year, but it’s become hard to find opportunities to meet up due to the coronavirus. Even for my fan meeting tomorrow, we had been preparing for six months, but as our circumstances changed, I wondered, ‘How can I proceed with this?’ As it was the first time I was meeting fans after my discharge, I kept wondering, ‘What am I going to do?’ Then I thought that even if there’s no audience, I want to create a space that feels like I’m in front of everyone even if everyone is at home.”

He continued, “Since this is the first time I’m trying this too, I don’t know how it will go. Although the sounds and vibrations won’t feel the same as an actual concert hall, I still want to convey the stories I wanted to tell and feelings I wanted to express.” 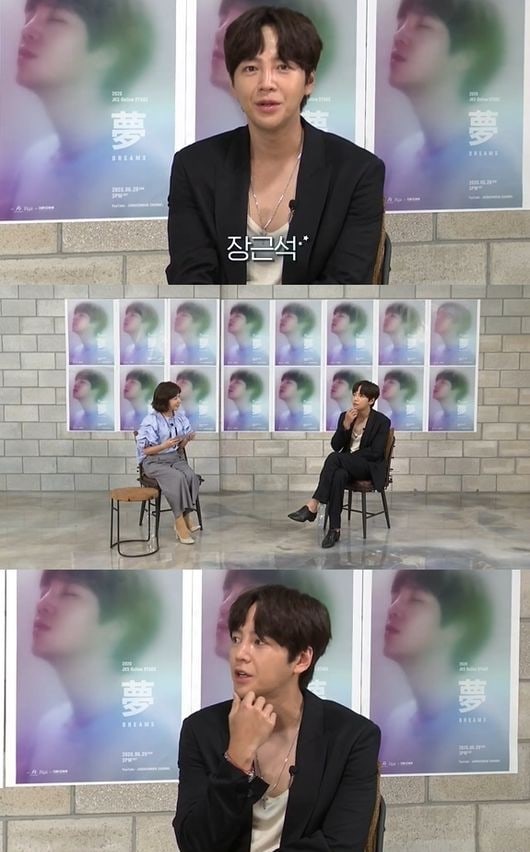 When asked what’s changed the most since his military service, Jang Geun Suk answered, “I think the biggest change is that I feel healthier. Before, there were so many things that made life feel like a roller coaster, so my life in itself was irregular. I was not healthy, physically or mentally.”

He added, “For the past two years, I would diligently go to work at 9 a.m. and go home at 6 p.m. It was the first time in my life living like that. I felt more relaxed, and as my body became healthier, my mind did too.” With a laugh he added, “I also aged two years.”

Jang Geun Suk later apologized to his fans and expressed his admiration for them, saying, “I felt so sorry to my fans for the past two years. Before then, I hadn’t once taken a rest, and if I wasn’t in Korea, I was in Japan. I thought about writing a post on my fan club site but I didn’t. It felt like I was putting up a wall between me and my fans.”

He further explained, “For the time being, I thought it was right that I do my best in the role I was given, but I felt so sorry. My fans said they wanted to send me chocolate on Valentine’s Day, but I told them, ‘I would appreciate it if you didn’t do anything that attracts attention from others.’ It wasn’t that I was rejecting their thoughtfulness. However, I did go on my fan site every day.”

With his last drama having ended in May 2018, many are looking forward to Jang Geun Suk’s next acting project. He commented, “I really want to act in a project. These days I wonder, ‘What’s a project with a story that makes the entire project shine and fits well with me?’ and read scripts everyday. I’m happy that I’m still able look over scripts, and I like that I fall asleep while reading them before bed.”

When asked if he feels pressure for his next project, Jang Geun Suk replied, “Not at all. I do want to be careful, but there’s no reason to think about the peripheral things. It’s my wish to meet a character that infiltrates into the story and is in tune with it. I’ve recently been having a lot of meetings with staff, and aside from the scale or cast of a project, I just want to feel the thrill of acting in front of a camera. Rather than find a specific character I want to play, I want to mesh into the story. I have a desire to play that kind of character.”

At the end of the press conference, Jang Geun Suk commented, “Over the past two years, I’ve become much healthier, and it has been a huge turning point in my life. It was a time for me to organize my life goals. Although I want to become independent, make a new agency, and act a little more cautiously, I also don’t want to live without having fun. I want to discover ways to have fun and share that. With regards to acting projects, I want to start each one with a more careful mindset.”