SEVENTEEN’s Jun, Mingyu, DK, And The8 Talk About Earning “Million Seller” Title, Keeping In Touch With Parents, And More

On June 29, SEVENTEEN’s Jun, DK, The8, and Mingyu appeared as guests on SBS PowerFM’s “Lee Joon‘s Young Street” to discuss their reaction to selling over a million copies of their latest mini album “Heng:garæ,” their relationships with each other’s parents, and more.

The SEVENTEEN members started off by talking about how each of them has changed since their trainee days. The8 complimented DK and said, “DK’s singing has gotten better, and his voice projection improved. He also became more attractive. He’s found his own style.”

DK continued with the compliments and said, “Mingyu was naive in the past, but now he has gotten smarter. He speaks his mind eloquently. I think he’s become an adult.”

Mingyu also said, “Jun never changes. His playfulness is still the same.” Meanwhile, Jun talked about how The8 has grown, saying, “The8 became a lot cooler and is more manly now.”

Next, the members revealed that they keep in touch with each other’s parents. The8 said, “I am close to Mingyu’s father. Because my parents are in China, Mingyu’s parents are like my Korean mother and father.”

He continued, “They help me out with things I need in my everyday life, and we even meet to dine out. They tell me, ‘We’re your mom and dad,’ because my parents are not in Korea.”

Mingyu added that The8 meets Mingyu’s parents without telling him. He said, “I asked The8, ‘What did you do earlier?’ and he said, ‘I met up with your dad.’ That shocked me.”

Later, Mingyu mentioned that he has loved soccer ever since he was young. He said, “I am still playing soccer as a hobby to this day.” DJ Lee Joon commented that he can tell Mingyu is good at soccer just by looking at him and that Mingyu reminds him of Highlight’s Yoon Doojoon, who is known to be a big soccer fan. 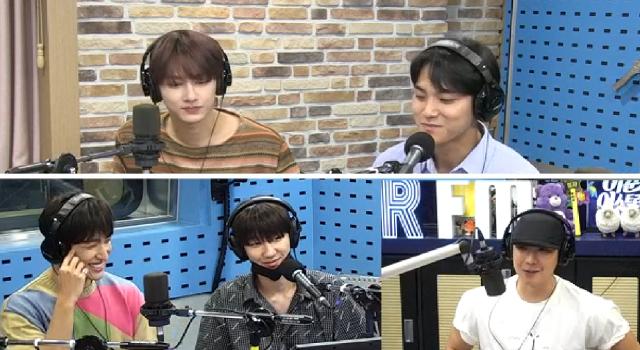 When a listener introduced the topic of food, Jun shared what he eats by himself. “I’ve eaten skate fish by myself,” he said. “There’s a restaurant for skate in Gangnam District. I went alone because I was so tired from practicing, and they placed a doll down for me, so I ate together with the doll. It was unusual.”

Lastly, the members spoke about how they felt upon selling over a million copies of their seventh mini album “Heng:garæ” and receiving the title of “million seller” for the first time since their debut. “We couldn’t believe it,” they said. “After we heard the news, the members talked about it a lot, and we ate out together.”

Check out the music video for their title track “Left & Right” here!