Baekhyun Talks About Approaching His 30s, Differences Among International Fans, Love For EXO Members, And More

EXO’s Baekhyun shared his thoughts on his age, international fans, and more on “You Quiz on the Block”!

tvN’s “You Quiz on the Block” is a program where the hosts Yoo Jae Suk and Jo Se Ho talk to civilians on the street and give them surprise quiz questions. The July 1 episode focused on Korean culture and K-pop, and Baekhyun made a guest appearance to represent the topic of K-pop.

On the show, Baekhyun talked about EXO becoming the first K-pop artist to perform at The Dubai Fountain, where one of the world’s best fountain shows takes place. Baekhyun commented, “I’m proud of myself. For some reason, I found myself putting my arm around the shoulders of the member next to me.”

Yoo Jae Suk asked Baekhyun about the differences among international fans. Baekhyun responded, “Fans in Europe and the United States dance along with us. It feels like a party. When I see those reactions, I also start making big gestures.”

He added, “Fans in Asia scream so loud to the point where I can hear them through my in-ear monitors. Even if I’m not feeling well, I feel like a superhero when I hear them cheering for me.”

Baekhyun also reflected on the past nine years with EXO. “When I look back on it, I think those times were really intense,” he said. “I definitely had hard times. Although it was nice to debut shortly after I became a trainee, I think I was also that unprepared. That’s why I had a fear of going on stage.”

He continued, “I had lost my confidence but since I can’t show people weak sides of myself, I tried my best to get over my slump in my own way. I think the members also knew that I was struggling a lot.” 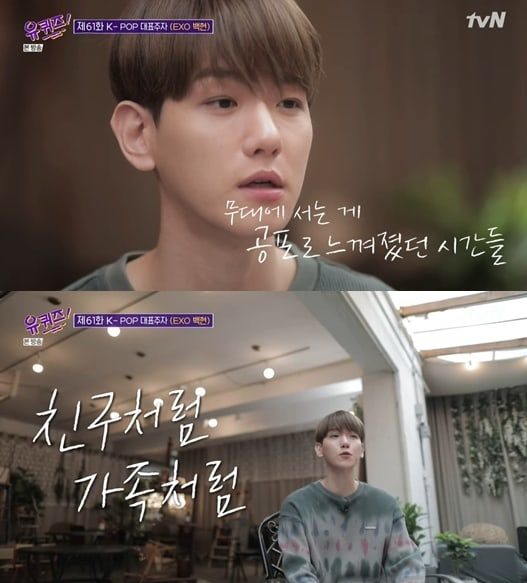 Baekhyun expressed his gratitude toward his members. “I think I’m very lucky to have met my members,” he said. “Even when we haven’t seen each other in a while, we joke around like friends, and we can comfortably discuss our future as young people looking toward their 30s.”

He said, “I always miss them. It would’ve been even more fun with them here today.”

Baekhyun then expressed his undying love for his job. He said, “If I could turn back time, I think I would still want to be an idol.”

Baekhyun also shared how he became an idol. “I became a trainee when I was 20 years old,” he said. “I started late. I always wanted to become a singer, but I didn’t know how to audition. I was recruited when I went to take my college entrance exam.” He said that he sang The Ray’s “Cleaning” (literal title) for his audition.

On the topic of his age, Baekhyun said, “I wish my 30s would get here faster. In the past, I felt pressured, but now I think that the true sides of me will show themselves naturally.” He continued, “I want to enjoy that sense of leisure, and I’d like to think that my 30s will become a time where I can show my real self.”

Regarding his fans, Baekhyun said, “I’ve become more like a friend to my fans. In the past, they were a bit difficult to approach, but now, they are really like friends to me. It feels like we are growing up together.”

He added, “I thought that if I distanced myself from my fans, they would feel hurt.”

Baekhyun sent a message to those dreaming of becoming idols. He said, “It’s very intense. I want to cheer you on.” He also revealed that during EXO’s earlier days, he had forced himself to be energetic. “The most important thing is taking care of your mental health,” Baekhyun said. “That is something only you can do.”

EXO
Yoo Jae Suk
Jo Se Ho
Baekhyun
You Quiz on the Block
How does this article make you feel?