As Channel A’s “Heart Signal 3” comes to a close, public attention around the show continues as strong as ever.

On July 2, Good Data Corporation released the rankings of non-drama TV shows and cast members that generated the most buzz between June 22 and June 28. The rankings are compiled from analyzing news articles, blog posts, online communities, videos, and social media posts about 178 non-drama TV shows that are currently on air or set to air soon.

“Heart Signal 3” was ranked No. 1 on the list, meaning that the show has maintained its streak at the top of the chart for eight weeks. Two of its cast members, Park Ji Hyun and Kim Kang Yeol, also topped the list of most buzzworthy non-drama TV show cast members. The “Kang-Ji” couple made waves with their date on the show, but Kim Kang Yeol has also been under fire about controversies related to his past.

JTBC’s “Phantom Singer 3” rose one place to achieve the No. 2 spot, while Mnet’s “I-LAND” made its debut at No. 3 with its premiere episode. “I-LAND” had already garnered much attention due to the fact that it is a collaboration between CJ ENM and Big Hit Entertainment.

The top 10 buzzworthy non-drama TV shows for the final week of June are as follows: 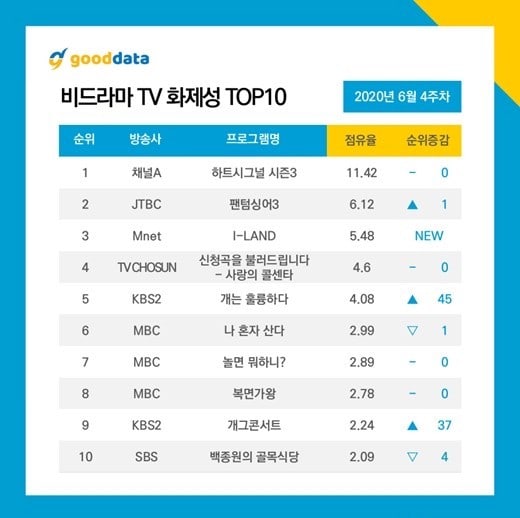 The top 10 buzzworthy cast members on non-drama TV shows are as follows: 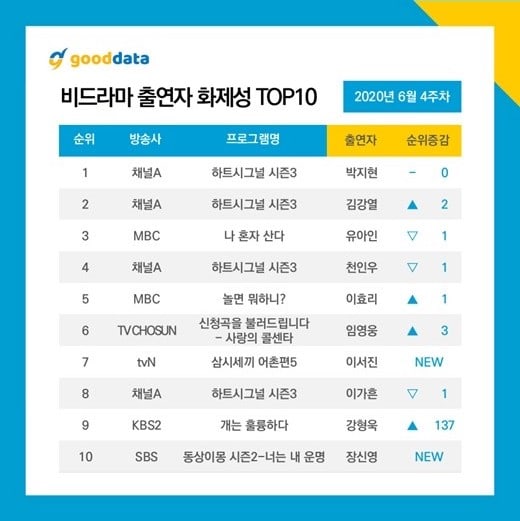 Check out the latest episode of “Heart Signal 3” here…