Kim Shin Young congratulated the actress on the success of her film, as “#ALIVE” recently surpassed 1 million moviegoers in only five days. She commented, “In today’s world, 1 million is really 10 million,” referring to the strain that the COVID-19 pandemic placed on the movie industry. Park Shin Hye thanked viewers, saying, “It must have been difficult to decide to go to the movie theaters, so thank you for coming. To be honest, I worried a lot. More than the success of the film, the health of our society is priority. Thank you for watching while following safety policies.” 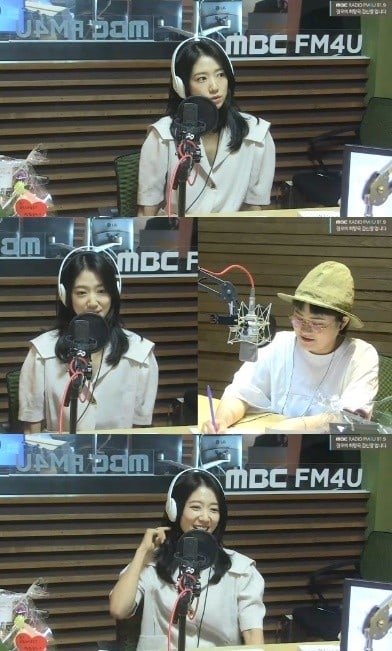 The actress also explained how she picks her projects. She explained, “Rather than ‘It will do well or it won’t,’ I think about, ‘It could be similar to a project I’ve done in the past’ and ‘It’s something I haven’t tried but it could be dangerous to do now.’ As a result, the film I picked this time was ‘#ALIVE.'”

Park Shin Hye revealed that the film’s special makeup artist was the same artist who worked on the hit zombie sageuk series “Kingdom.” She shared a funny story regarding the zombie actors’ detailed makeup, saying, “When you’re filming, there’s obviously time to eat and rest. There was a time I turned around and screamed after forgetting we were all filming together. There were a lot of moments on set where I was surprised and caught off guard.”

Regarding her co-star Yoo Ah In, Park Shin Hye explained that she thought he was the perfect fit for his role even before they began filming. She added, “He’s so good at acting, and he was still so charming after we met in person.”

The actress explained that she is the type to cry easily, to the point where she can’t watch documentaries in the morning or else she’ll cry. She discussed her approach to crying scenes, saying, “I try my best to cry when they’re filming my face. It’s okay the first two times, but it gets a bit exhausting after that.”