Update: Yeonwoo Issues Clarification Regarding Earlier Post Opening Up To Fans About Her Career Change

In the afternoon of July 4, Yeonwoo took to her Instagram story to issue a clarification regarding her post made earlier today. Her statement reads as follows:

Hello, this is Yeonwoo! You were very surprised by the articles that came out this morning, right? All I was doing was speaking to my fans in the official fan cafe about an issue that recently occurred regarding comments on Instagram livestreams, I had no other intention besides that! I think there was a misunderstanding because it was a post I’d written due to speculation and slander, so the content was a little confusing, and as it was written in a space for only my fans, some deeper topics were touched upon. I’m doing well and I’m working hard to prepare for upcoming projects. I apologize for unintentionally causing concern. 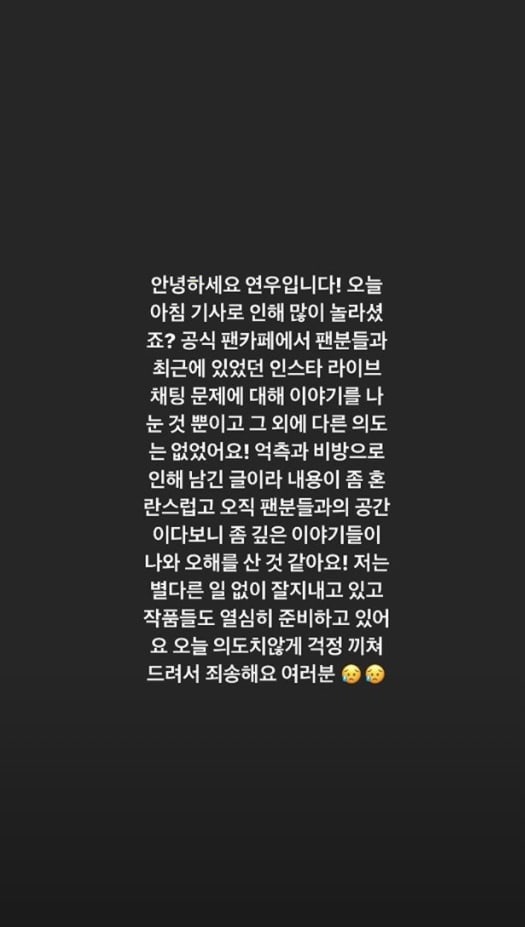 Former MOMOLAND member Yeonwoo took to her official fan cafe on July 4 to open up about her transition from idol member to actress, as well as what she has experienced till now.

In November 2019, MLD Entertainment announced that Yeonwoo would be leaving MOMOLAND in order to focus on her career as an actress. The agency stated, “While Yeonwoo has had deep affection for her MOMOLAND activities, she has decided that continuing together with her actress activities would be too much strain for both her team and herself so to leave the team and concentrate on her career as our actress [under MLD Entertainment].” Since then, Yeonwoo has been working on her career as an actress, and was recently confirmed to join the cast of the upcoming KBS 2TV drama “If You Cheat, You Die” (literal translation).

In the early hours of July 4, she shared a post on her official fan cafe and the post reads as follows:

I’ve had a lot on my mind for the past couple of days, so I’m coming here at this late hour. It’s a bit of a serious topic but as always, there isn’t anything big.

Whenever I turn on a livestream on Instagram, tough topics keep coming up in the chat. And if I don’t respond to them, there are those who get angry at that.

Everyone. How many people out there have the courage to cleanly give up everything they dedicated their youth to for something new? I am not that bold. And I don’t have the will to do that either. Not in the past and not in the present. All I did was hold back, endure, and hold on but it was no use. I didn’t betray you all out of greed of wanting to do something else. Do you know how painful it is to be misunderstood and criticized by the people you love? Please stop. You know that I can’t explain everything. Why do some people still hang on to words that didn’t come from my mouth, thoughts that didn’t come from my head, and actions that I didn’t do?

And I don’t want to get hung up on the changes I underwent and how difficult it was. I don’t want to cry anymore. I just want to draw a future with you, the people I love, and be happy. We’ve gone through enough tough times, haven’t we?

Everyone, I know that the majority of people here are those who love and trust me, but I really have nowhere else to say this. I felt like speaking in an open space would not be proper, so I came here. I’m sorry.

Even if you hate me, I love you all. Just. I know my words could feel like a burden. But I’m putting in the effort to do well. As long as people recognize that, I would be so, so grateful. It’s late, I’m sorry. Goodnight.

MOMOLAND
Yeonwoo
How does this article make you feel?