Yoon Shi Yoon plays the role of Seo Do Won, a police detective who quickly rises up the ranks to become team leader at an early age due to his dedication to his job. Kim Dong Young plays Kim Jin Woo, the youngest and newest detective on the team who holds deep admiration for Seo Do Won after he saved him from making a grave mistake in the past. Cho Wan Ki takes on the role of Woo Jae Hyuk, a gruff and strict detective who greatly respects Seo Do Won.

The new stills show the team of three detectives in the midst of their investigation at a train station. Seo Do Won surveys the scene with his hands placed firmly on his hips. Meanwhile, Kim Jin Woo looks down with a worried frown as Woo Jae Hyuk speaks to him with an air of seriousness. Viewers are curious to find out more about the incident that happened at the train station. 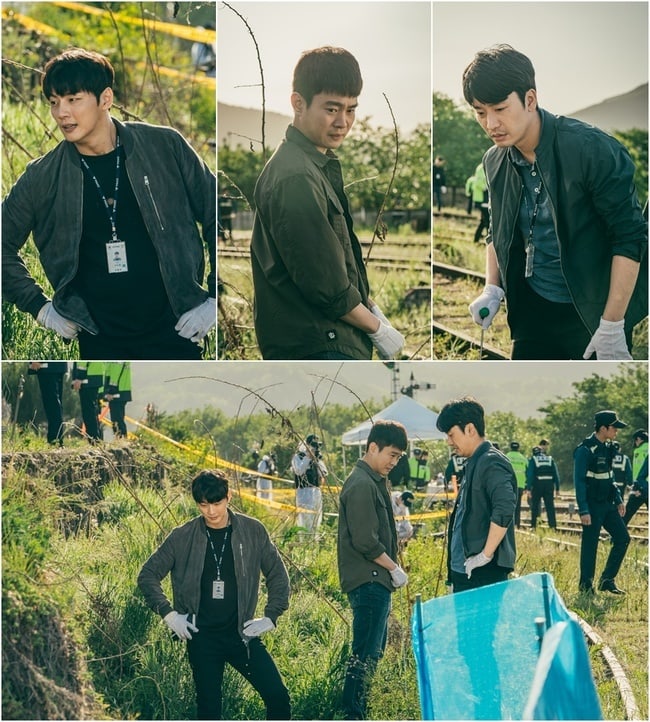 The three actors exhibited perfect teamwork while acting out their roles as detectives and friends, creating laughter on set with their lines and actions. Viewers are showing interest in their passionate acting skills and how they will portray the special bromance between their characters.

The production team commented, “After Kim Dong Young and Cho Wan Ki met Yoon Shi Yoon, they created maximal synergy. Keep an eye out for their strong teamwork both on set and in the drama.”

In the meantime, catch a teaser for the drama here: