Super Junior’s Choi Siwon and Uee talked about starring together in a new sci-fi project!

On July 8, the cast and directors of the new sci-fi film/drama crossover series “SF8” took part in a press conference. This new project is a Korean original sci-fi anthology series that covers many different topics from artificial intelligence to virtual reality, from robots to superpowers, and more.

Eight directors have created their own 40-minute projects for “SF8,” including Oh Ki Hwan directing the romantic comedy “Augmented Infatuation” (literal title). Starring Uee and Choi Siwon, it tells a story set in the future about a woman and man who meet on a dating app without showing their faces. Because of a malfunction in the app, they end up unable to meet in real life.

It’s described that the two actors were chosen because they have the most perfect faces, as is required for the story. Director Oh Ki Hwan said at the press conference, “They’re the most handsome man and most beautiful woman in Korea,” and Uee and Choi Siwon made everyone laugh by repeatedly saying, “Thank you!” 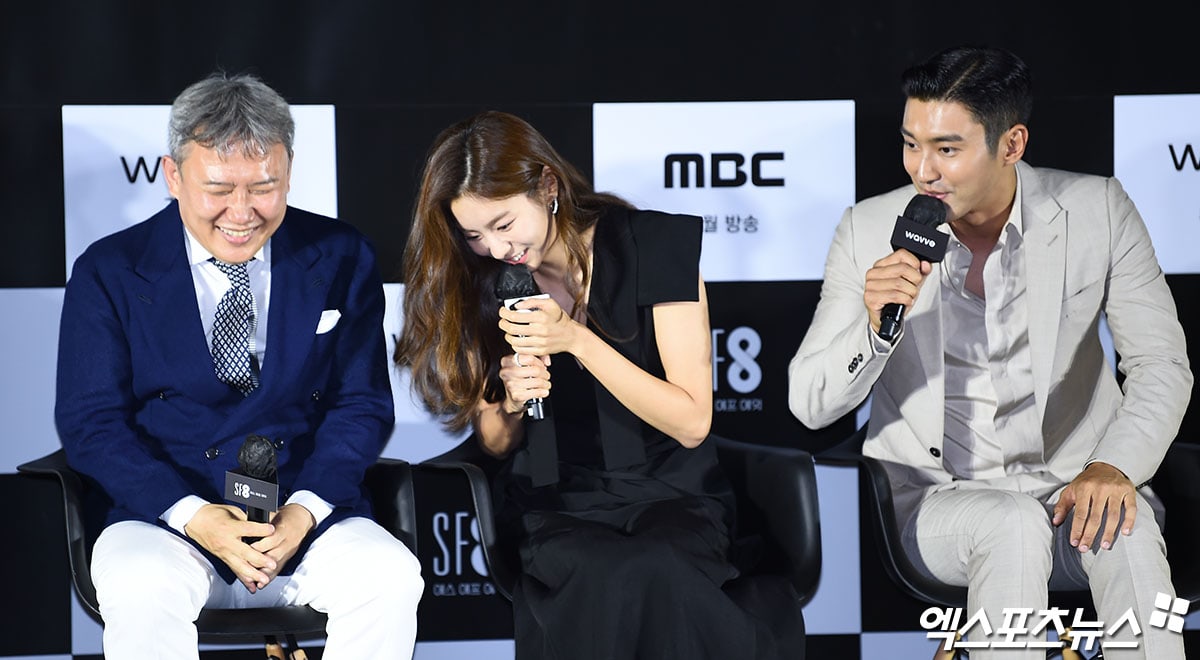 Uee talked about how she’d reacted to being cast as the female lead Ji Won. “I asked at my first meeting, ‘Is it really true that I was cast? Am I really playing Ji Won?’ and I thanked them several times. I said that I’d try hard to be a person who’s a good fit for the role of Ji Won.”

Choi Siwon joked to Oh Ki Hwan, “I did my best, but I don’t know if it was to your liking.”

Uee also shared the fun they had on set together, first pointing out that Choi Siwon is very senior in the industry compared to her.

“I dance a lot when I’m on set, but I usually dance alone,” she said. “Whenever I start dancing, my co-star gets flustered, but [Choi Siwon] is the first and only co-star who’s danced together with me.”

“He was the first senior actor who moved his shoulders with me when I danced,” she continued. “I was grateful.”

Choi Siwon said about working with Uee, “We both started out as idols and we’ve known each other for a long time, so it helped with quickly adapting on set.”

And watch Uee in “My Only One” below!

Uee
Choi Siwon
XPN
SF8
How does this article make you feel?