Kim Shin Young expressed her gratitude to BTS’s V for her surge in global fans!

On the July 11 episode of MBC’s “The Manager,” Kim Shin Young appeared as her singer persona Second Aunt Kim Da Vi and talked about BTS’s V recommending her song to fans.

While in the car with her manager on her way to an event, Kim Shin Young commented, “Second Aunt Da Vi is more popular than I am.” In keeping with her “aunt” character, in which she refers to everyone as her “nieces” and “nephews,” Kim Shin Young added, “With my nephew V.”

In the studio, the cast and guests watched a clip from a BTS Naver V Live broadcast held by V and Jungkook, in which V asked Jungkook, “Can we listen to a really good song?” He then began playing “Gimme Gimme” by Second Aunt Kim Da Vi, adorably singing along to all the lyrics. 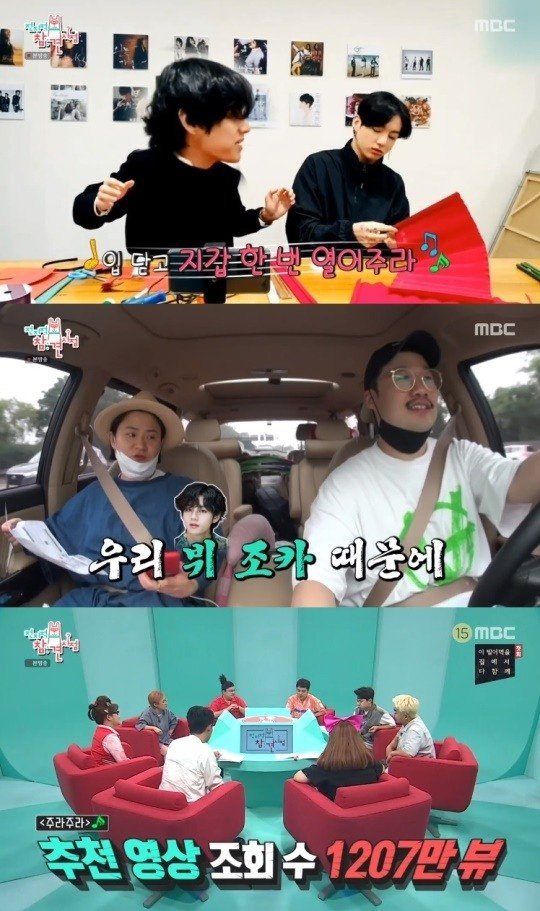 As a response, Second Aunt Kim Da Vi sang a hilarious trot-style jingle using BTS’s name and song titles before adding, “Take all my love! My nephew V is the best!”

Back in the car, Kim Shin Young explained to her manager, “Thanks to my nephew V, I receive a lot of direct messages from my global nieces and nephews. I’ve just been saying ‘Thank you’ in English.”

She hilariously continued, “They ask me questions… but I’ve just been saying ‘Thank you.'” Her manager commented, “They must think you’re a really good person. They could’ve sent you hate, and you might have still responded, ‘Thank you.'”

In the studio, Jun Hyun Moo shared, “The video of V recommending your song has more than 12 million views,” emphasizing how that number surpasses Seoul’s population of 9.27 million. The hosts then asked Kim Shin Young to send a thank you message to her nieces and nephews all over the world, and she hilariously said in English, “Ladies and gentlemen, many rain,” which is a literal translation of her name Da Vi.

She continued, “Many view, thank you very much,” while accidentally throwing in a Korean word. When the hosts pointed out her mistake, she made the studio erupt into laughter by adding frustratedly, “I don’t know English!”

The latest episode of “The Manager” will soon be available with English subtitles on Viki. In the meantime, catch up on last week’s episode below!

BTS
Kim Shin Young
V
The Manager
How does this article make you feel?