On the July 12 episode of SBS’s “Running Man,” the cast celebrated their 10th anniversary through solving a case with viewers live on air.

In the episode, Jun So Min arrived first on set. Previously, the cast had been told that they would receive an advantage if they arrived first. Lee Kwang Soo, who came after Jun So Min, asked, “Why would you come an hour early?” Yang Se Chan, who arrived third, noted, “Shouldn’t Suk Jin hyung come early, since he doesn’t sleep a lot?” 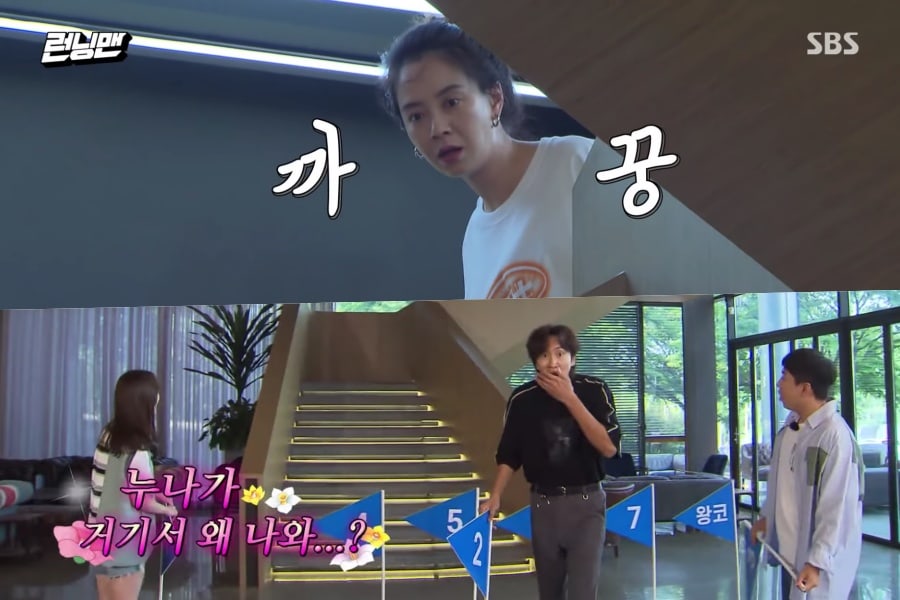 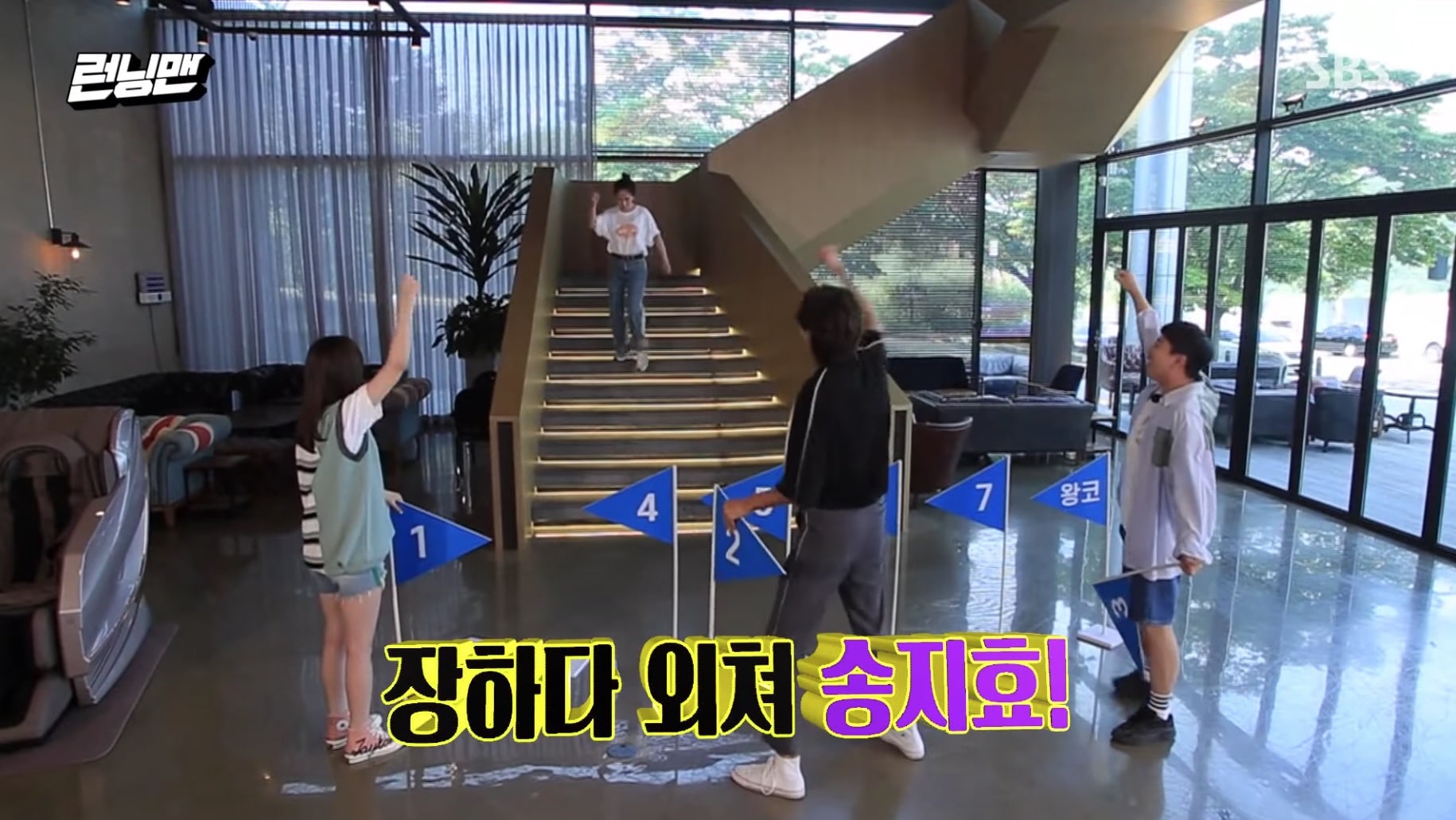 Song Ji Hyo defied everyone’s expectations by arriving fourth. Lee Kwang Soo said, “Are you seeing this? Song Ji Hyo came early for the first time in 10 years.” Yang Se Chan joked, “Did you sleep here?” Song Ji Hyo said, “I just came early because I wanted to come early.” She then shocked everyone again by casually pulling out her shirt so she could get her microphone attached. Lee Kwang Soo suggested she go off to the side and she said, “All this fuss over a mic.” Lee Kwang Soo retorted, “If you’re going to be like this, do you want to go to a sauna this weekend?”

After all the members had arrived, they were given their roles. Ji Suk Jin is a wealthy company president who has invited the other members to his home. Jun So Min is a gambler, Lee Kwang Soo a judge, Yang Se Chan a detective, Song Ji Hyo a lawyer, Kim Jong Kook an analyst, HaHa an insurance company employee, and Yoo Jae Suk is Ji Suk Jin’s butler. 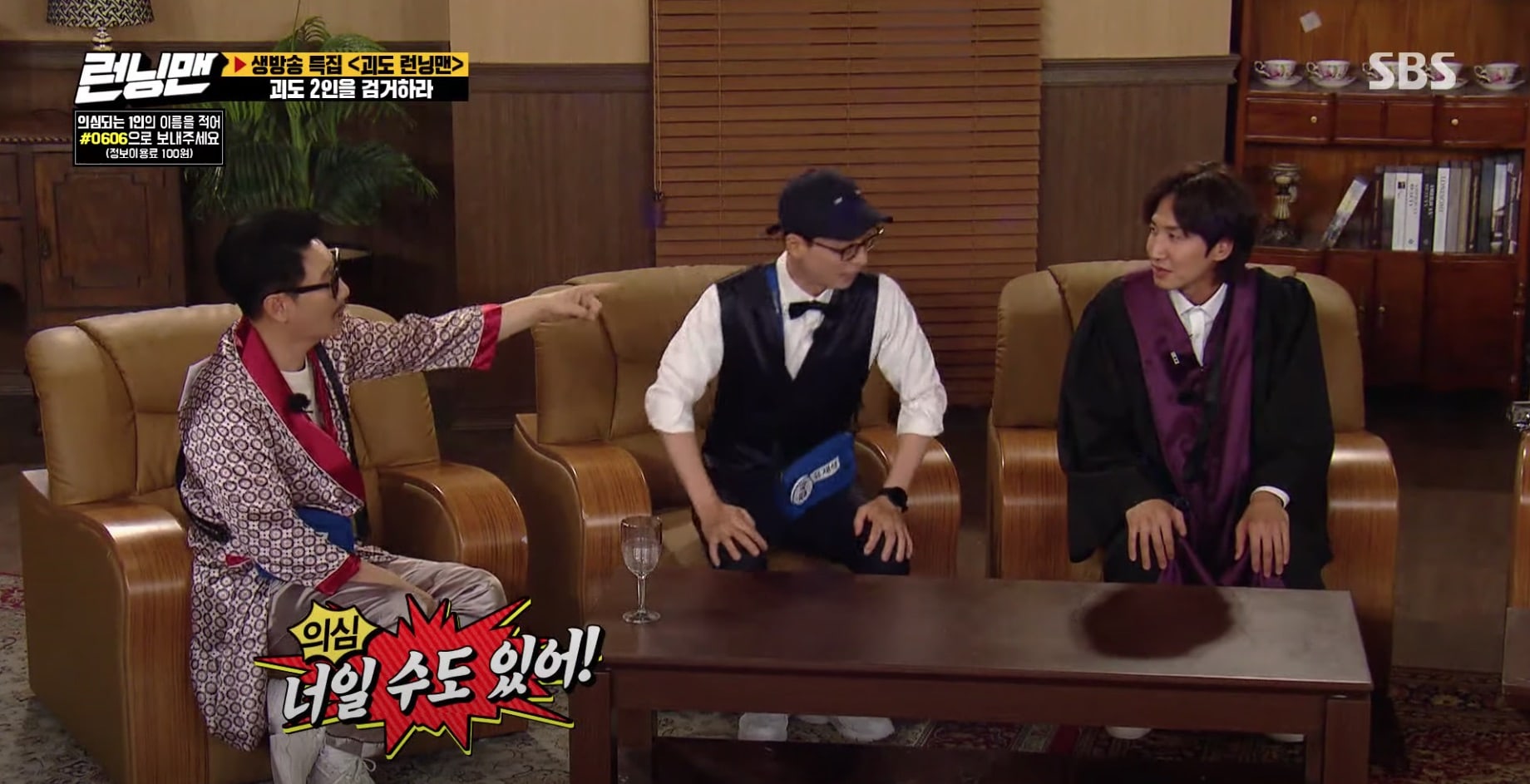 Titled “Challenge of Phantom Thief ‘Running Man'”, the 10th anniversary race involved identifying the two phantom thieves in the cast with the help of viewers on live broadcast. The members would have 50 seconds each to search the rooms. In that time, the phantom thieves had to move the gold from Ji Suk Jin’s safe into his own safe. Through various missions, the members would get to see the videos of the members searching the rooms. At the end, the viewers would vote on who they thought were the thieves.

Each member also had a different advantage according to their roles. For example, Yoo Jae Suk, as the butler, was the only one who knew the passcode to the safe. The detective had the right to secretly look at 20 seconds of a video of a member of their choice, while the insurance employee could check the amount of gold remaining. The gambler could receive two times the punishment or reward of their team if they used their advantage before the final results.

After the gold was stolen, the members proceeded with their missions. In the first trial, Yoo Jae Suk and Lee Kwang Soo were selected as the suspects. Yoo Jae Suk became a strong suspect because his answer did not line up with HaHa’s about the amount of gold in the safe. 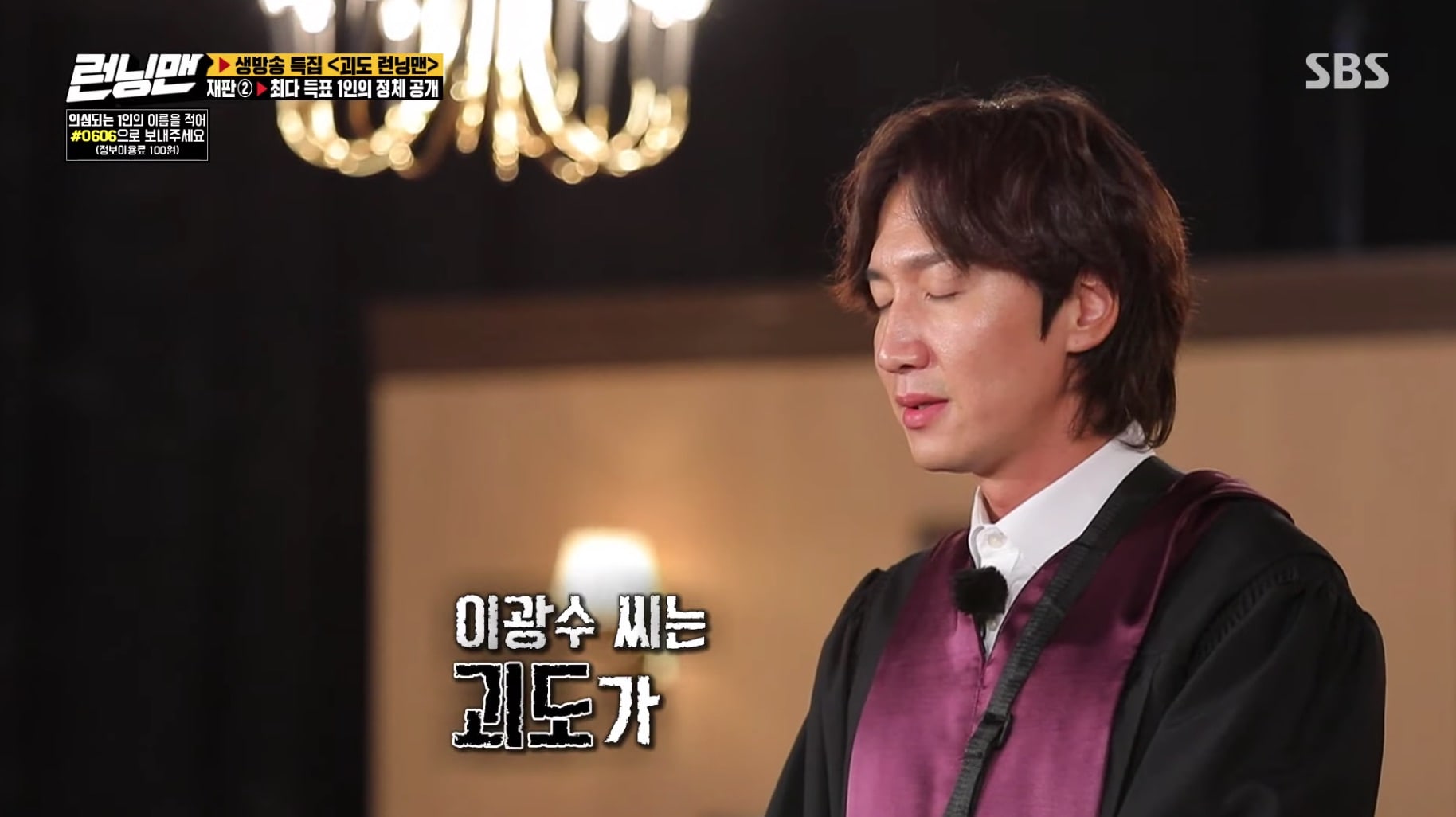 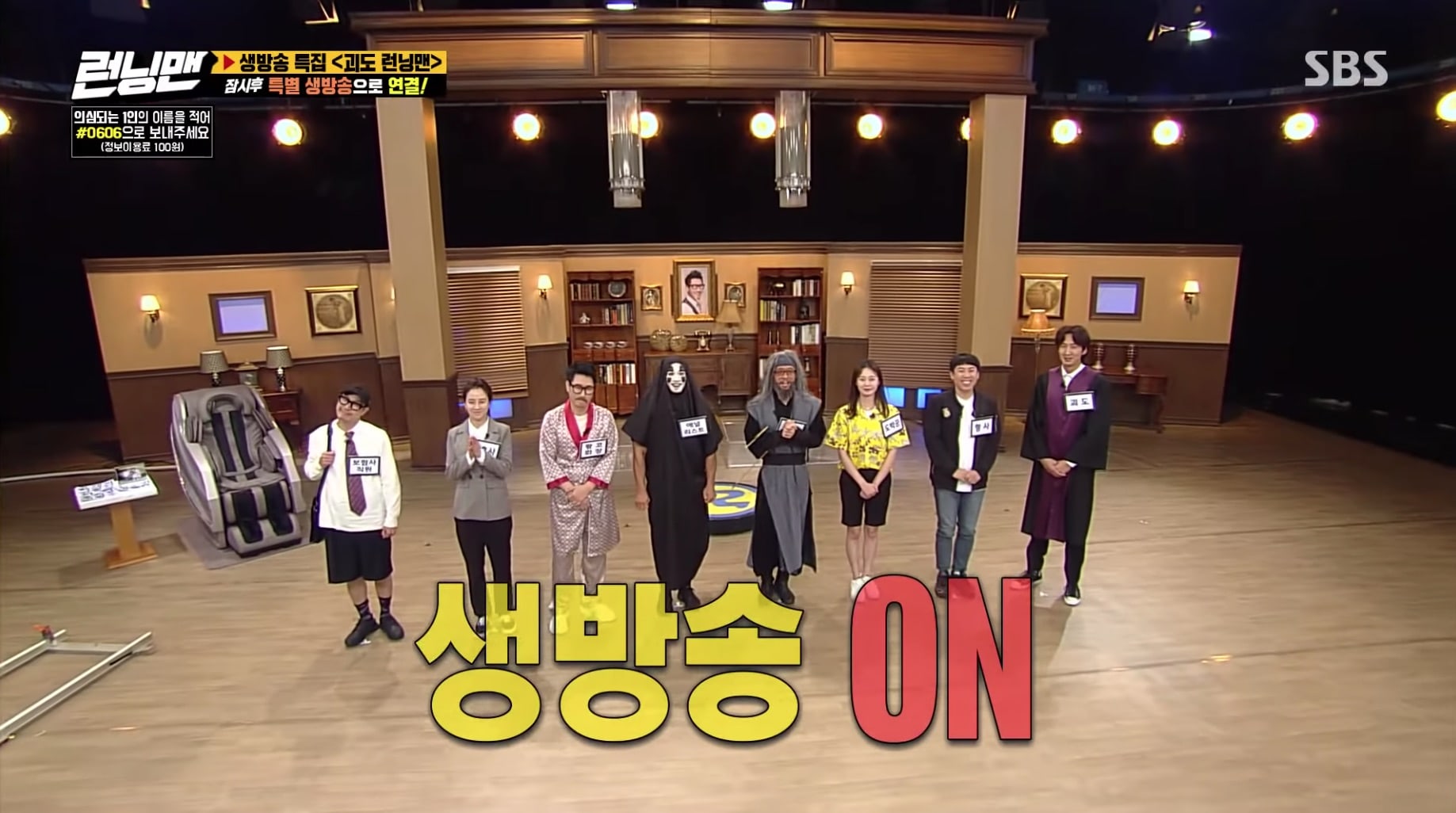 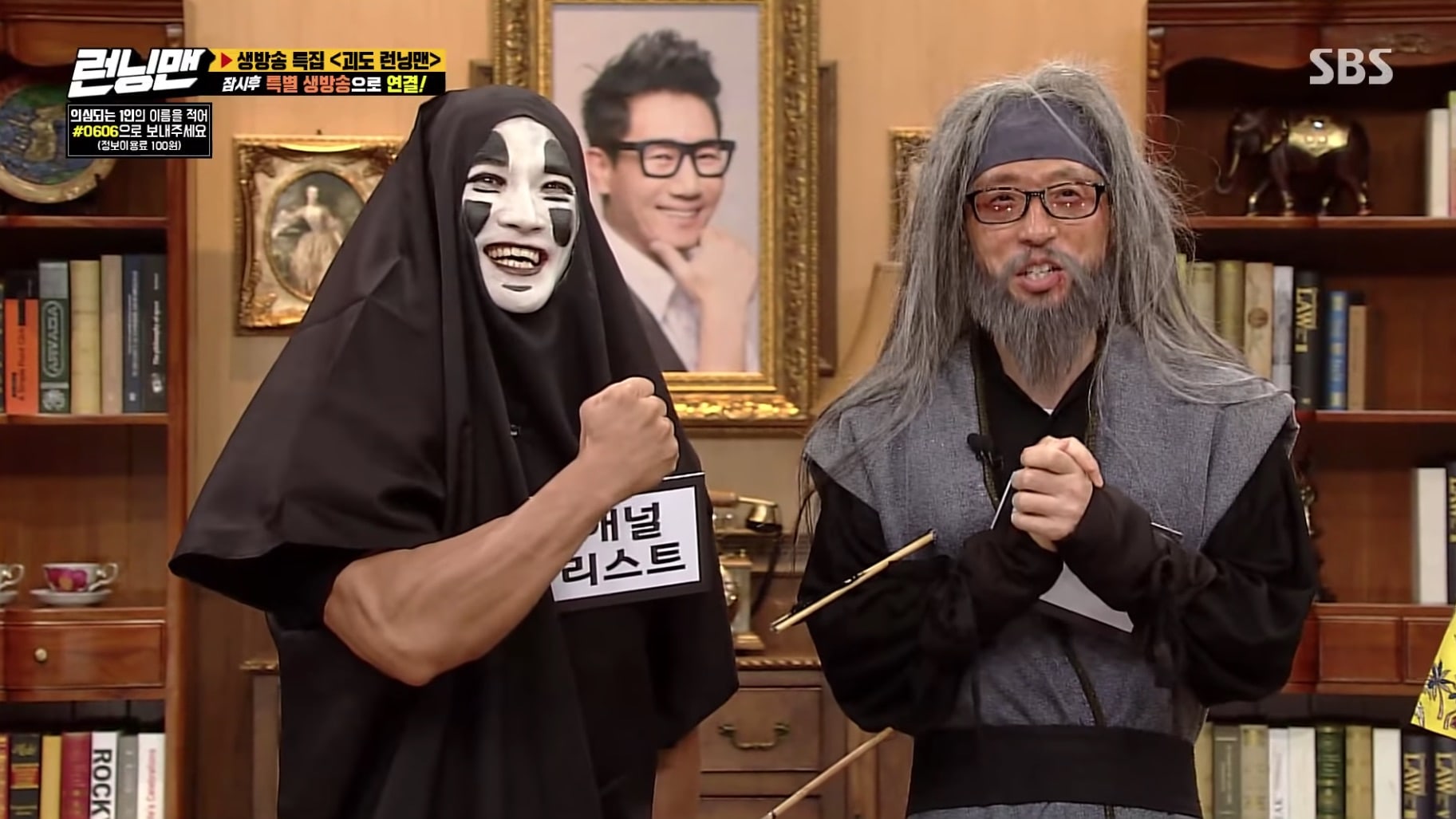 It was after the final mission that the live broadcast began. Yoo Jae Suk and Kim Jong Kook opened the live broadcast in full costume, which was a punishment from a previous episode. Yoo Jae Suk said, “I was supposed to be a zombie from ‘Kingdom.’ I’m the character that Heo Jun Ho played. But I took out the zombie lenses and I became a tired hermit from the mountains.” Kim Jong Kook was dressed as a muscular No-Face from “Spirited Away.” 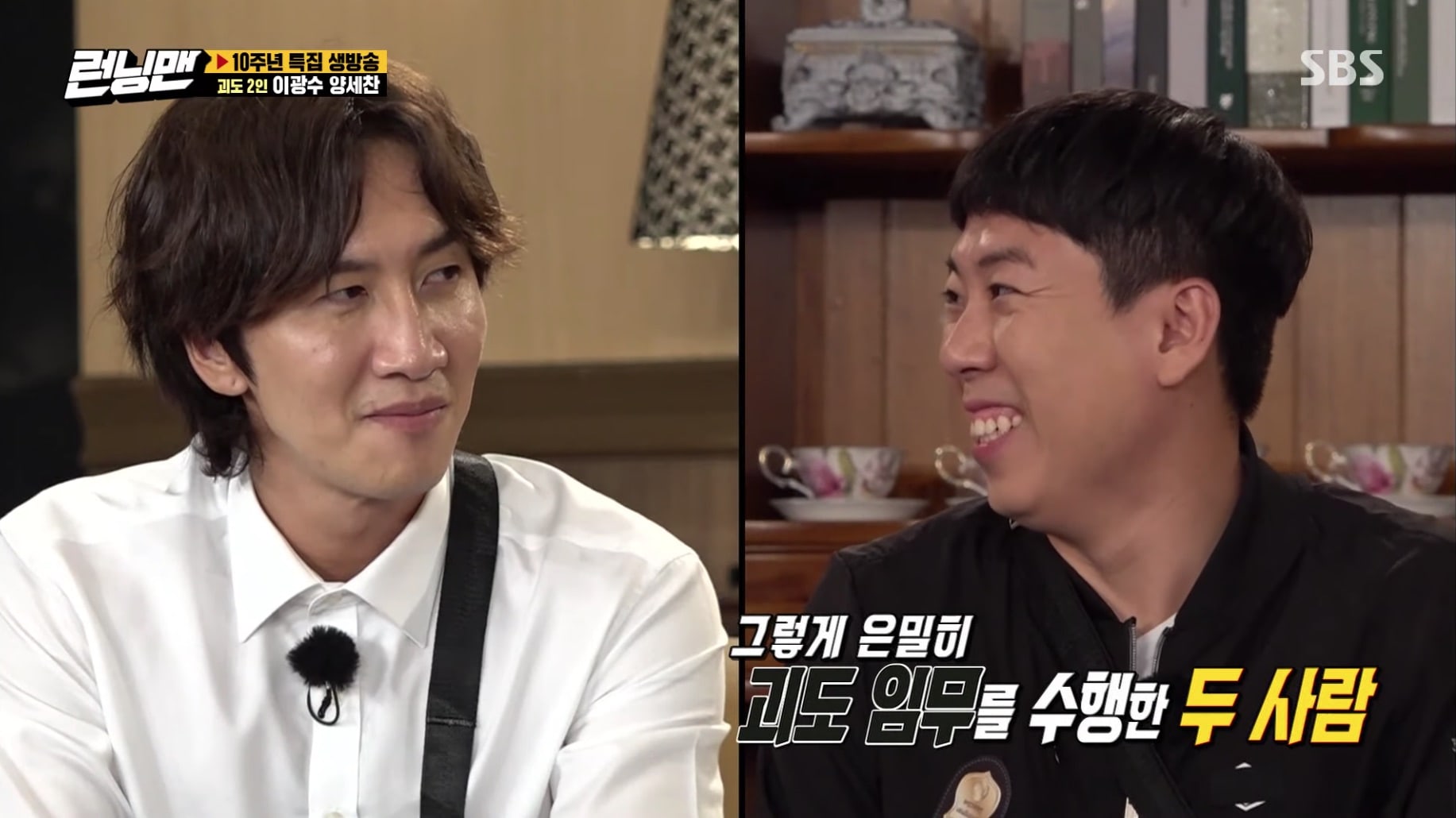 You can check out an episode of “Running Man” below!