tvN’s “Hometown Flex” is a new variety program that follows Lee Seung Gi and Cha Tae Hyun around various cities in Korea as they meet up with celebrities who grew up there to help introduce them to the area.

On the July 12 premiere, Lee Seung Gi and Cha Tae Hyun took the KTX to Busan Station where they met up with Busan locals Simon Dominic, Jang Hyuk, and Lee Si Eon. The producing director (PD) explained the program to them saying, “‘Hometown Flex’ is a variety program where local representatives take Seoul natives around various cities and show off what the cities have to offer.”

The Busan natives were asked to speak in their Busan dialect and Jang Hyuk explained, “It’s awkward. I used to use it really well, but after living in Seoul for 26 years, my dialect ends up turning into Seoul speech.” He continued, “The Busan dialect depends on your generation. Once you learn the emotion, you get the feel for it.” Simon Dominic jokingly commented, “How can you explain the dialect so well…when you aren’t very good at it?”

Jang Hyuk later suggested pork and rice soup for their first meal, and the group headed off to his favorite restaurant. However, they were surprised by the producers’ sudden proposal of a competition, with only the winning team being able to eat, making Simon Dominic comment, “If I knew it was like this, I wouldn’t have joined this program.”

Despite having suggested the restaurant, Jang Hyuk got the first quiz wrong, and only Lee Seung Gi and Cha Tae Hyun were given the chance to eat. 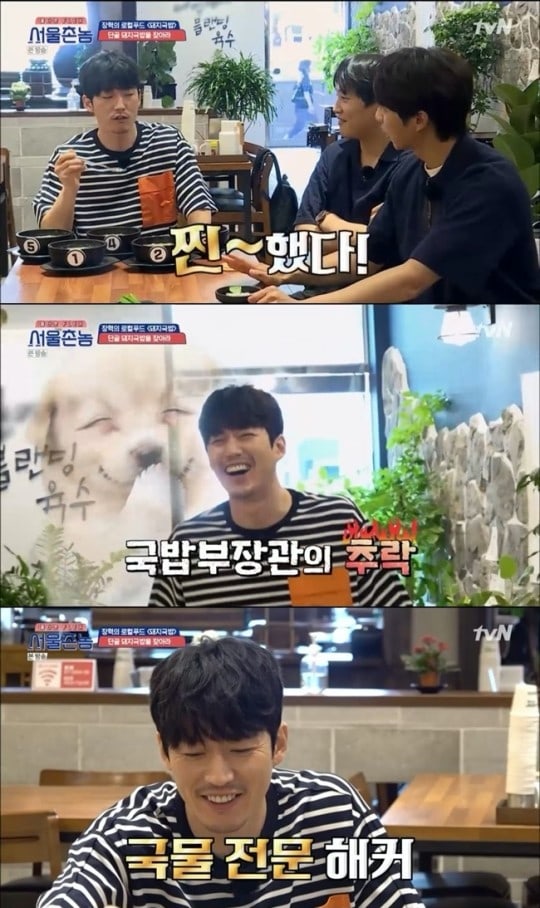 After eating, the group officially began their trip around Busan. Simon Dominic shared, “I didn’t know much while living in Busan. I never went to Haeundae and didn’t really go to the Gwangan beach, but after working in Seoul, I began to miss Busan.”

Their first stop was Taejongdae, a natural park in Busan with cliffs overlooking the sea. Despite the heat warning, Jang Hyuk insisted on a hot latte, and Lee Seung Gi commented with a laugh, “I feel so secure going with locals.” However, as they strenuously climbed the steps, Cha Tae Hyun exclaimed, “I’m not letting you guys get away with this if the view isn’t amazing.”

For lunch, the producers gave them a mission to get chopsticks from the store on the cliff. With a three-set seafood meal on the line, the Seoul team won once again. They even won the next mission and teased the Busan team by saying, “We want to stop eating. We’re so full.” 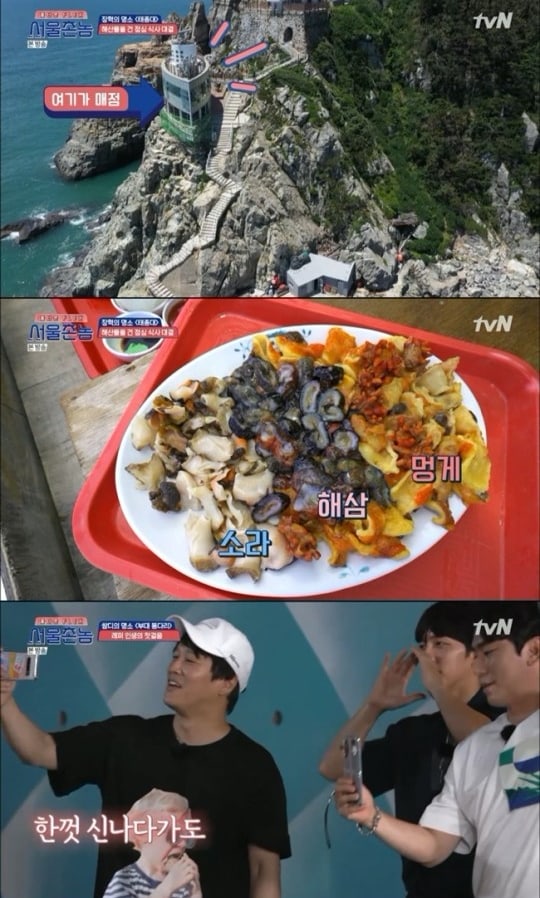 Through a special opportunity, Simon Dominic finally got to eat, and he suggested that Jang Hyuk and Lee Si Eon eat with him. While they were eating, Lee Si Eon talked about his admiration for Jang Hyuk while growing up, sharing, “I really wanted to become like you. In my neighborhood, there were always so many rumors about you having lived there.”

After visiting a cafe overlooking the Yeongdo District at Lee Si Eon’s request, the group head to the Pusan National University Station. Simon Dominic explained his connection with the place saying, “When I was in 8th grade, I went to a live bar in Busan,” crediting the owner there for getting him into breakdancing and rap.

The live bar turned into a non-alcoholic nightclub one day, and Simon Dominic shared that he stopped visiting. He also talked about always practicing his rap under the bridge beside Busan Station, and he put on a performance of “Simon Dominic,” which he created in his hometown.

After a mini fan sign under the bridge, Simon Dominic visited the club where he ran into the bar owner he mentioned earlier. Seeing him for the first time in 20 years, he honestly revealed, “When I was younger, I was so upset that the live bar turned into a non-alcoholic nightclub.”

Greeting many others from his past for the first time in 20 years, Simon Dominic shed some tears one of the part-time workers at the time commented, “I still remember clearly the Ki Seok (Simon Dominic’s birth name) who opened the door and walked in.”

Watch Jang Hyuk in his most recent drama “Tell Me What You Saw” below!