2AM’s Jo Kwon Talks About About His Family’s Hardships, His Mother Being Diagnosed With Cancer, And More

On the July 13 broadcast of SBS Plus’s “Are You Eating Well?” 2AM’s Jo Kwon opened up about his difficult childhood, struggles as an idol, and more.

Jo Kwon, who debuted 13 years ago, talked about what’s been on his mind lately as an artist. He said, “After I was discharged from the military, I thought that I want to live like my real self, not according to how the public wants me to be.”

He revealed that he faced hard times when he was younger. “When I was in the fifth grade, we went bankrupt because of my parents’ debt,” Jo Kwon said. “We lived in a single room. During my childhood, music was my only escape from poverty. We lived on 60,000 won (approximately $49.98) per month.”

Jo Kwon shared that his parents accumulated about 500 million won (approximately $416,500) in debt. He said, “When I was 12, creditors raided our house, collected water in a bucket, and hit my mother in the face with the water. She doesn’t have an eardrum now.” Jo Kwon expressed his shock upon seeing his mother attacked like that and admitted that it has become an emotional scar for him.

He teared up, recalling a time when his mother was thrown down onto the asphalt by the creditors while she was trying to see Jo Kwon on his way to school, causing her jaw to break. 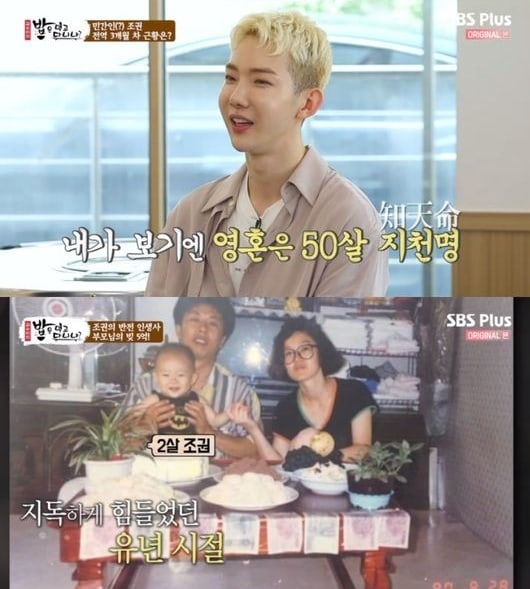 In 2000, Jo Kwon appeared on a TV show for young talents featuring JYP Entertainment founder Park Jin Young. Jo Kwon revealed that he secretly auditioned for the show. He said that his mother worried a lot for him at first, but later, she even accompanied him to the finals for the second round of auditions.

Although Jo Kwon rose in popularity following his appearance on the show, he admitted that the trainee life that followed was not easy. “I endured eight years as a trainee,” he said. “The hardest part of my trainee days was that there was no guarantee [of debuting], and I felt a lot of pressure that I might get cut if I’m wasn’t good enough. There was continuous pressure to stay as a trainee in the company since there were evaluations every month.”

He continued, “I spent those eight years feeling anxious and pressured, and I was thinking that I must hurry up and debut to support my family.”

Jo Kwon also shared that he didn’t receive any income until three years after his debut. He said that he was busy paying off the fees from his eight years of training. When things weren’t getting better after debut, Jo Kwon revealed that he even wanted to retire from the industry.

However, Jo Kwon decided to hold on and said that he was eventually able to buy his parents a new house. He said, “Being able to gift my parents with a comfortable house is what makes me the happiest.”

Then, Jo Kwon talked about who he is as an artist. He said, “I only think about wanting to live as who I am, and something that wakes another persona inside of me is high heels.”

Jo Kwon added, “I gained confidence and dignity that were as high as the heels were, and I felt like this is why I became a singer.”

Jo Kwon also revealed that his mother was diagnosed with melanoma while Jo Kwon was serving in the military. He said, “It spread from her big toe, and it was inevitable that she would have to get an amputation. My heart sunk from the sudden news after I enlisted in the army.”

He then thanked actress Kim Hye Soo, whom he had met through the KBS drama “The Queen of Office,” for supporting him during his hard times.

Later, Jo Kwon’s mother made a special appearance. She opened up about feeling sorry for her son throughout his childhood. She commented, “The day Jo Kwon auditioned, I thought that he met the wrong parents, and I cried for a long time by myself in the bathroom.”

She continued, “When I saw Jo Kwon’s debut stage, I cried in the audience for a long time. I was so proud of my son.” 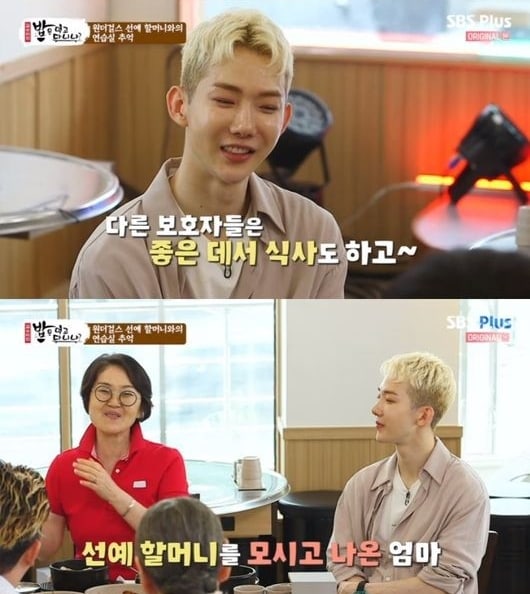 Jo Kwon’s mother then said to him, “My son, whom I’ve saved in my phone contacts as ‘Mom’s treasure,’ my son, whom I gave birth to and raised with difficulty — I pray that you will not be hurt emotionally anymore.”

Jo Kwon responded, “As you have always done, I hope you will trust my path, and I want to become a son who is forever reliable and sometimes like a daughter, as well as a friend-like son.”

Watch Jo Kwon in the drama “The Queen of Office” below: