Producing director Choi Bo Pil of “Running Man,” who was in charge of the show’s special 10th anniversary episodes, spoke about the recent live broadcast of “Running Man” and shared thoughts on the longevity of the program.

Talking about the special live broadcast of “Running Man” for its 10th anniversary, PD Choi Bo Pil said, “First, it’s such a relief that we were able to complete the live show without any disasters. The text voting exceeded the production team’s expectations, and as a part of the production team, it was a proud, but nerve-wracking experience. And I’m so proud of the ‘Running Man’ cast for leading the live show like the veterans that they are. I also want to thank all of the viewers for joining us.”

The PD continued, “As a member of the production staff, I’m honored to be with the program for its 10th anniversary. The current staff is working hard to follow in the footsteps of the staff before us, who created the foundations of an amazing program. We will show even more development in the future. The cast, as well, has been extremely helpful amid changes in the production staff and direction. Each of the cast members are so proud and happy for having reached this monumental milestone. But we’re not getting complacent. Our aim is to continue on this road, creating a competitive program. We will work hard so that we can be together for a long time, far beyond 10 years.” 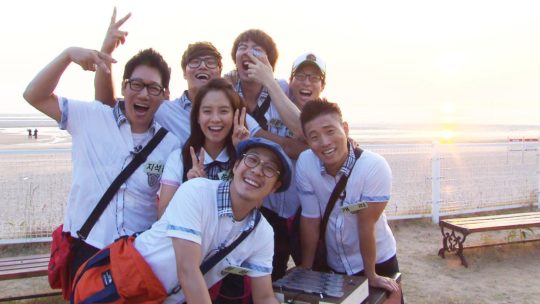 Asked about how “Running Man” has been so steadfast amid changing trends in the variety show landscape, Choi Bo Pil said, “When variety shows were incredibly popular, so many new shows began, but the only show that has remained thus far without season changes is ‘Running Man.’ We think there aren’t many shows where celebrities with variety show talent can really spread their wings, and with that in mind, this 10th anniversary of ‘Running Man’ is incredibly meaningful.”

The moments he feels most proud about “Running Man” are when people say that the show is fun. “When the entertainment and suspense that the production team was aiming to achieve gets relayed well to the viewers and we hear them say that it was a lot of fun, that’s when we’re happiest. Honestly, the ‘Running Man’ team doesn’t have the best work schedule, but when we receive positive feedback like that, it really gives us motivation to get through the tough schedule.”

On the most difficult moments during “Running Man,” the PD said, “It’s when the production team isn’t confident about what they’ve prepared. In my case, I don’t have as much experience yet, so when we’re filming, things sometimes start moving in a direction that I didn’t expect. When the production team sets things up in such a way that we are unable to achieve what we aimed to, I feel apologetic and responsible as the director.”

Closing, Choi Bo Pil said, “Thank you to all of the viewers who have loved ‘Running Man’ for the past 10 years. One of the most moving and relatable comments I saw was, ‘Thank you to Running Man for being with me through elementary school, middle school, high school, and college.’ As a long-time fan of ‘Running Man’ myself, I’m so proud to have joined a program that has become a part of our fans’ lives. We promise to all of our viewers that we will continue to develop the show to relay fun and vivid entertainment that’s better than ever before.”