Update: BLACKPINK Counts Down To Release Of “Ice Cream” With Selena Gomez Through D-DAY Poster

BLACKPINK has unveiled a D-DAY poster for their “Ice Cream” single with Selena Gomez. The track is out at 1 p.m. KST today! 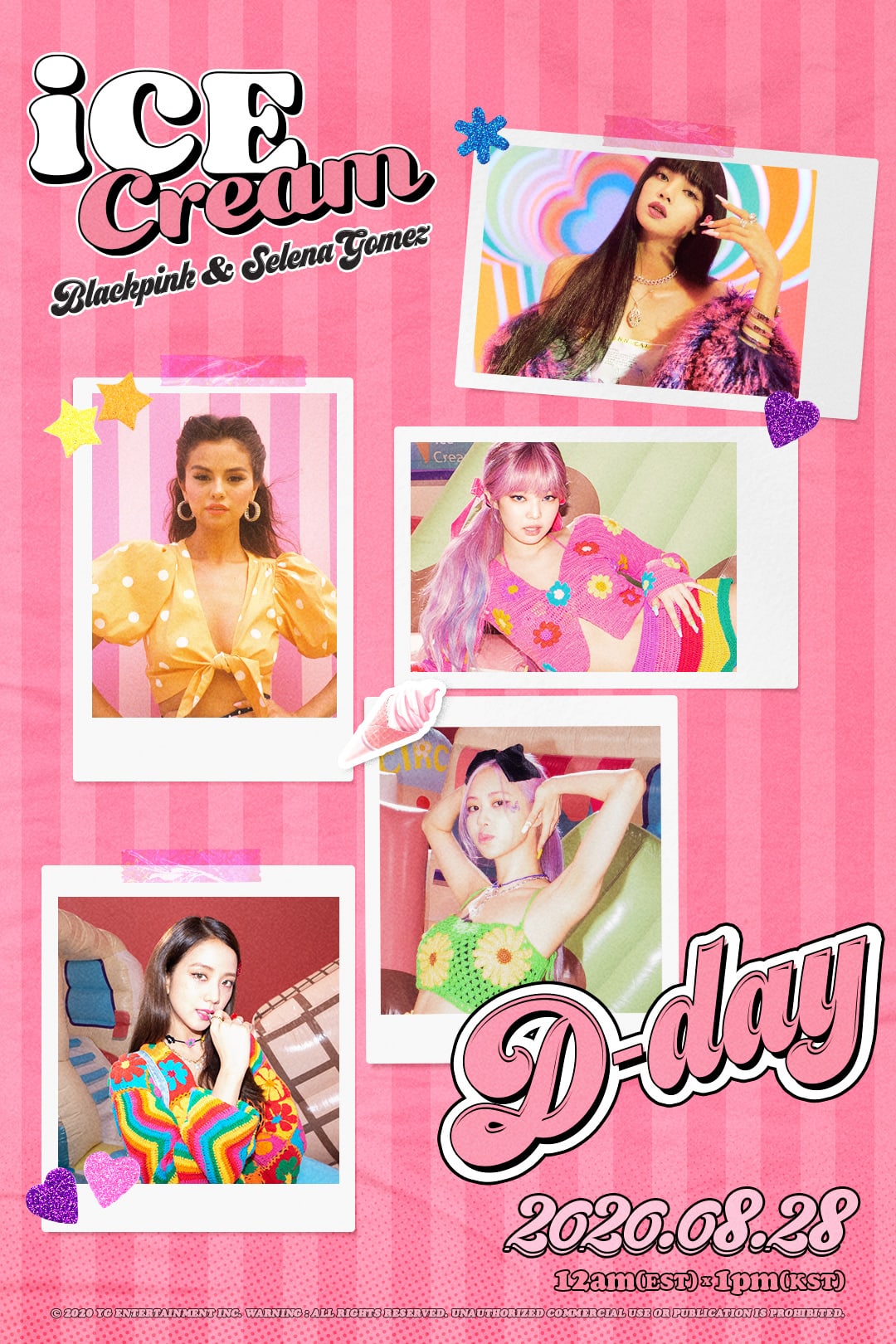 D-1 posters of BLACKPINK have been revealed for “Ice Cream” with Selena Gomez! 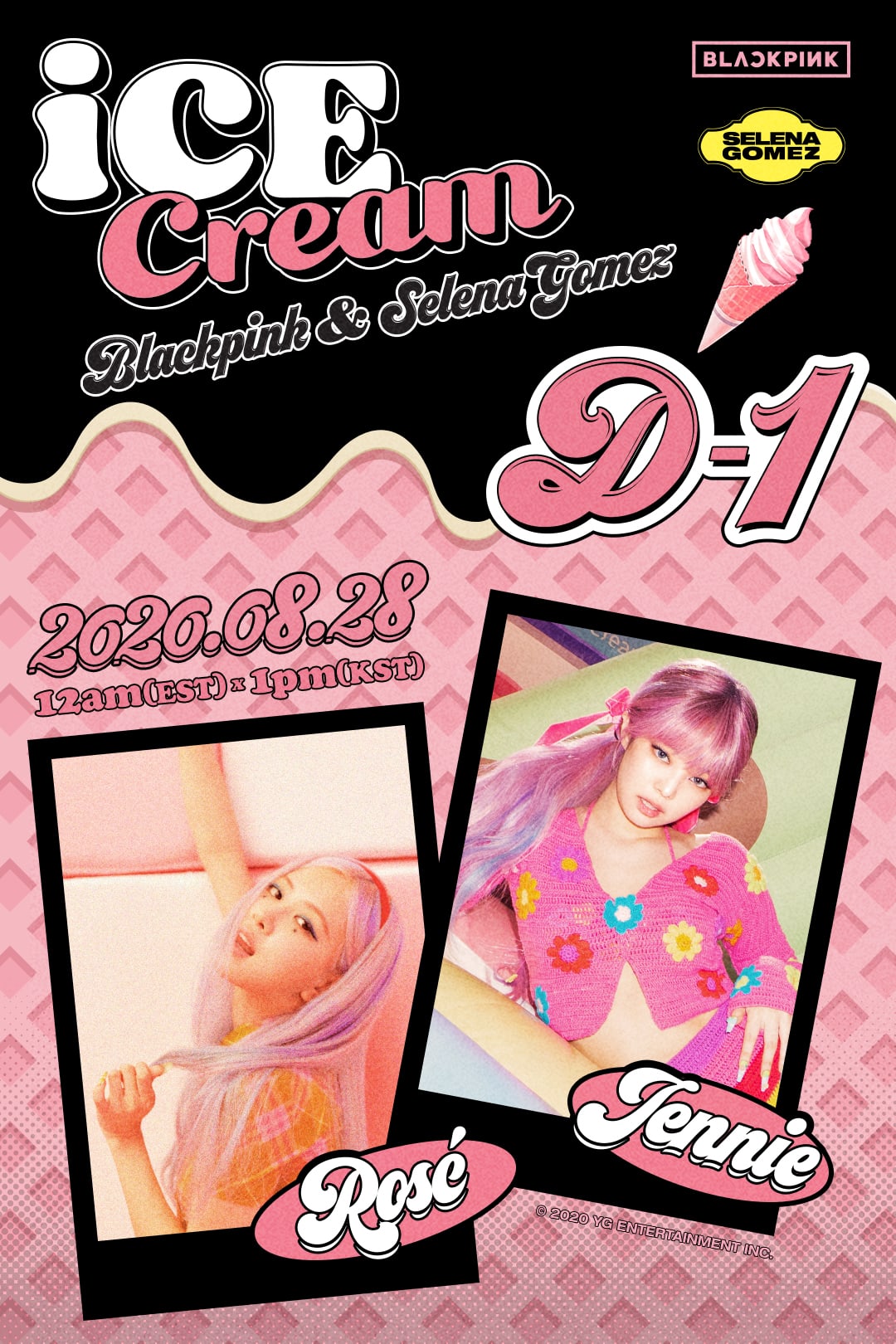 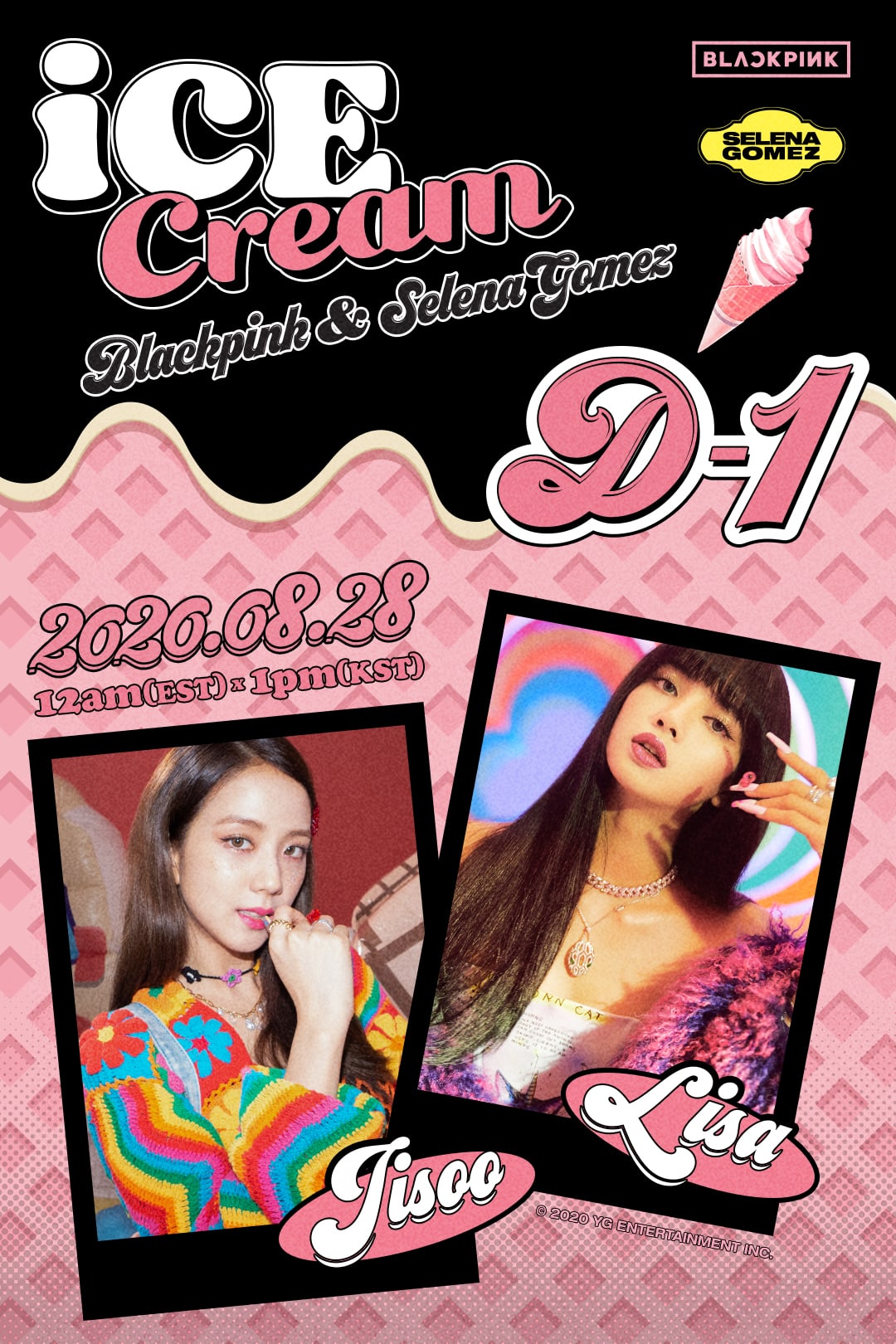 BLACKPINK has shared a poster for Selena Gomez, who will be collaborating with the girl group on their upcoming release “Ice Cream.” 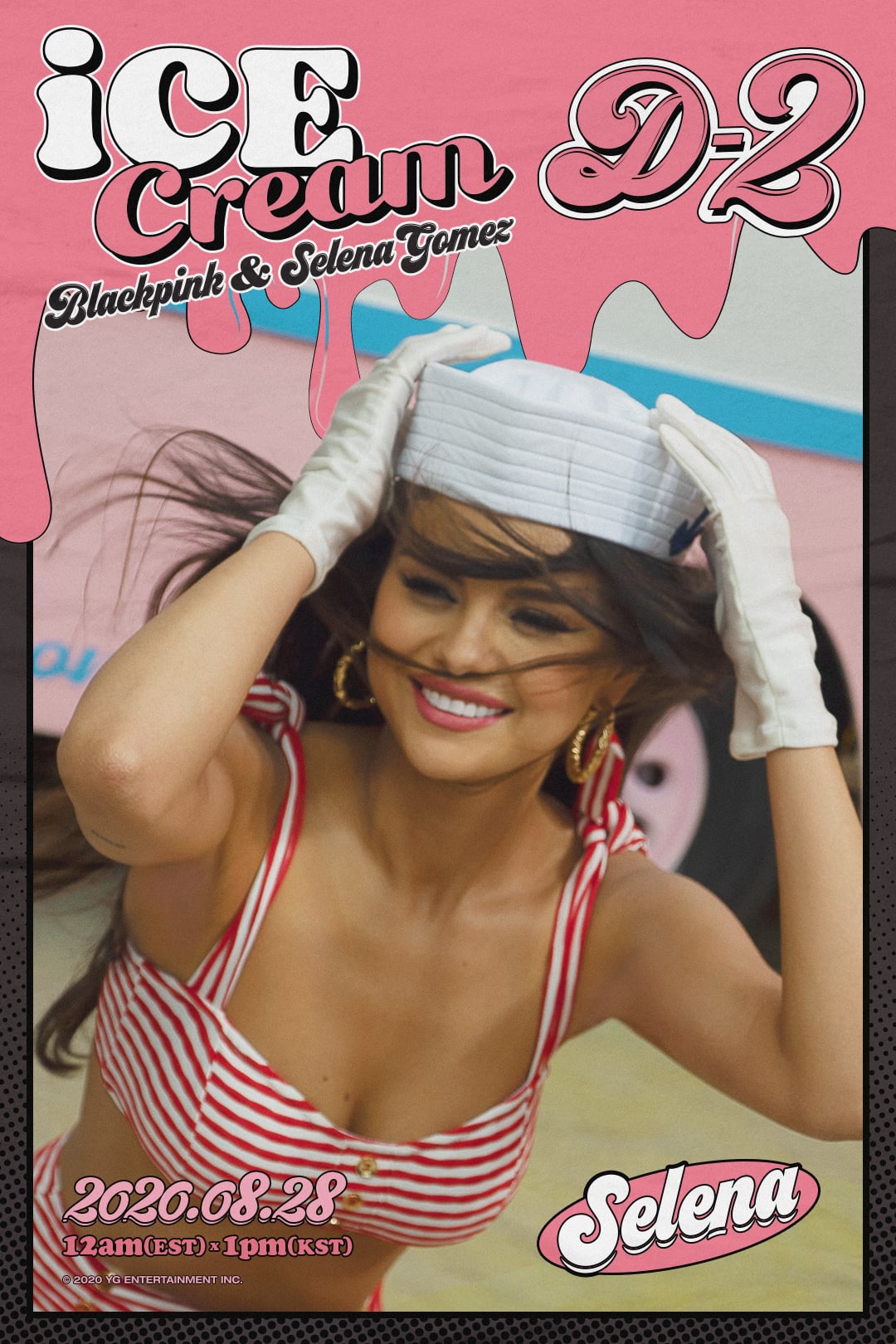 With two days left to go until the release of “Ice Cream,” BLACKPINK has revealed a poster of Lisa. 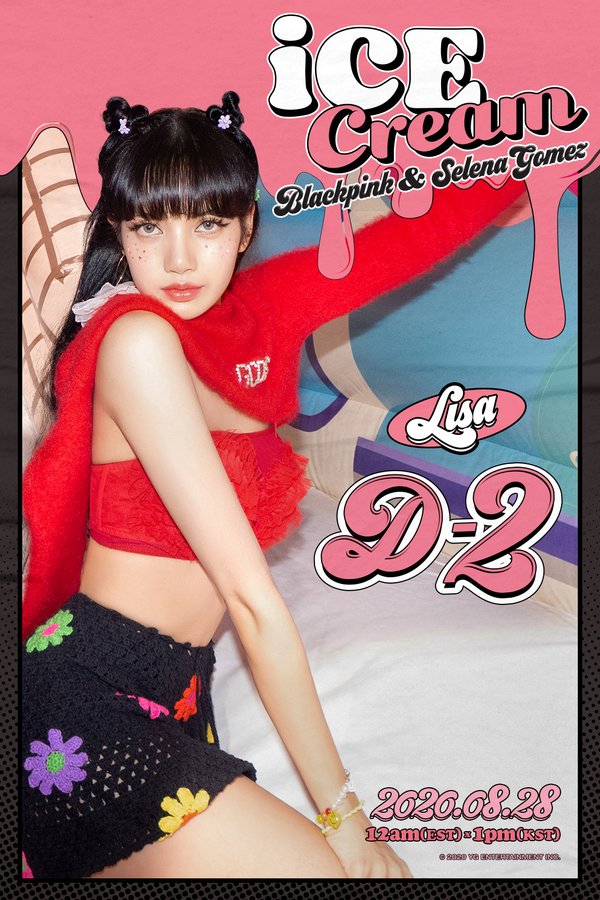 A poster of Rosé has been released for BLACKPINK and Selena Gomez’s “Ice Cream”! 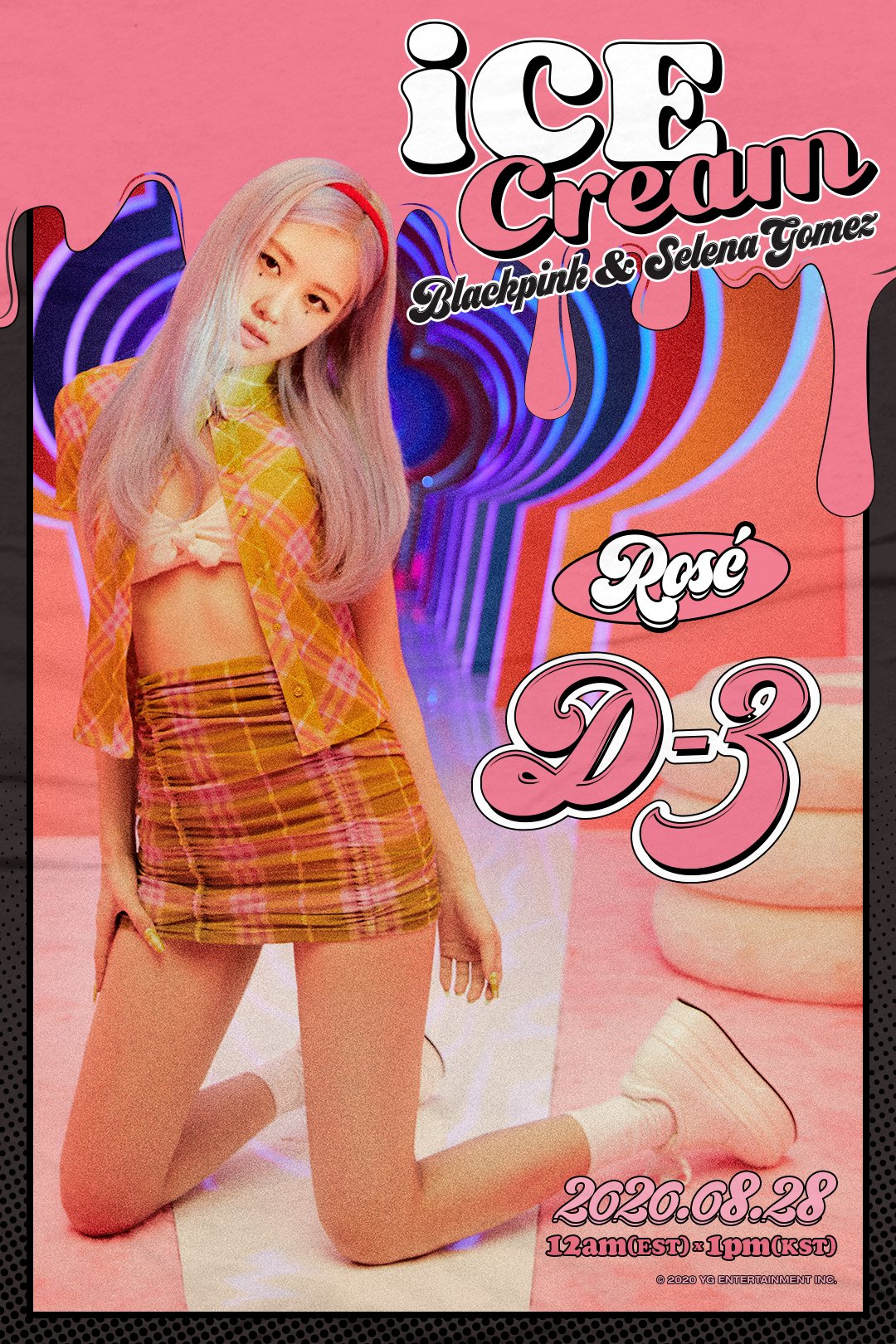 BLACKPINK has unveiled their D-3 poster of Jennie for BLACKPINK and Selena Gomez’s “Ice Cream”: 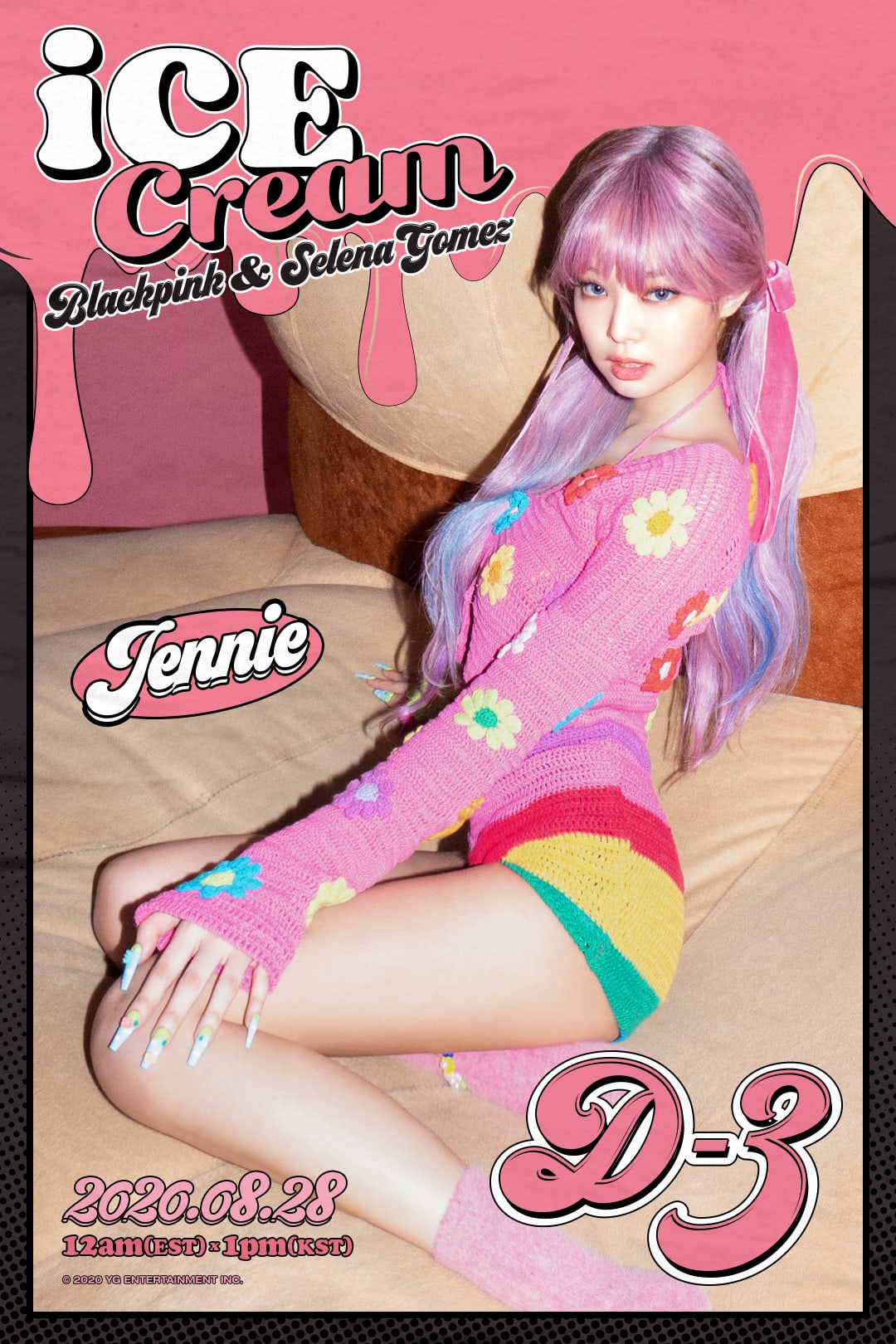 A D-4 poster of Jisoo has been released for BLACKPINK and Selena Gomez’s “Ice Cream”: 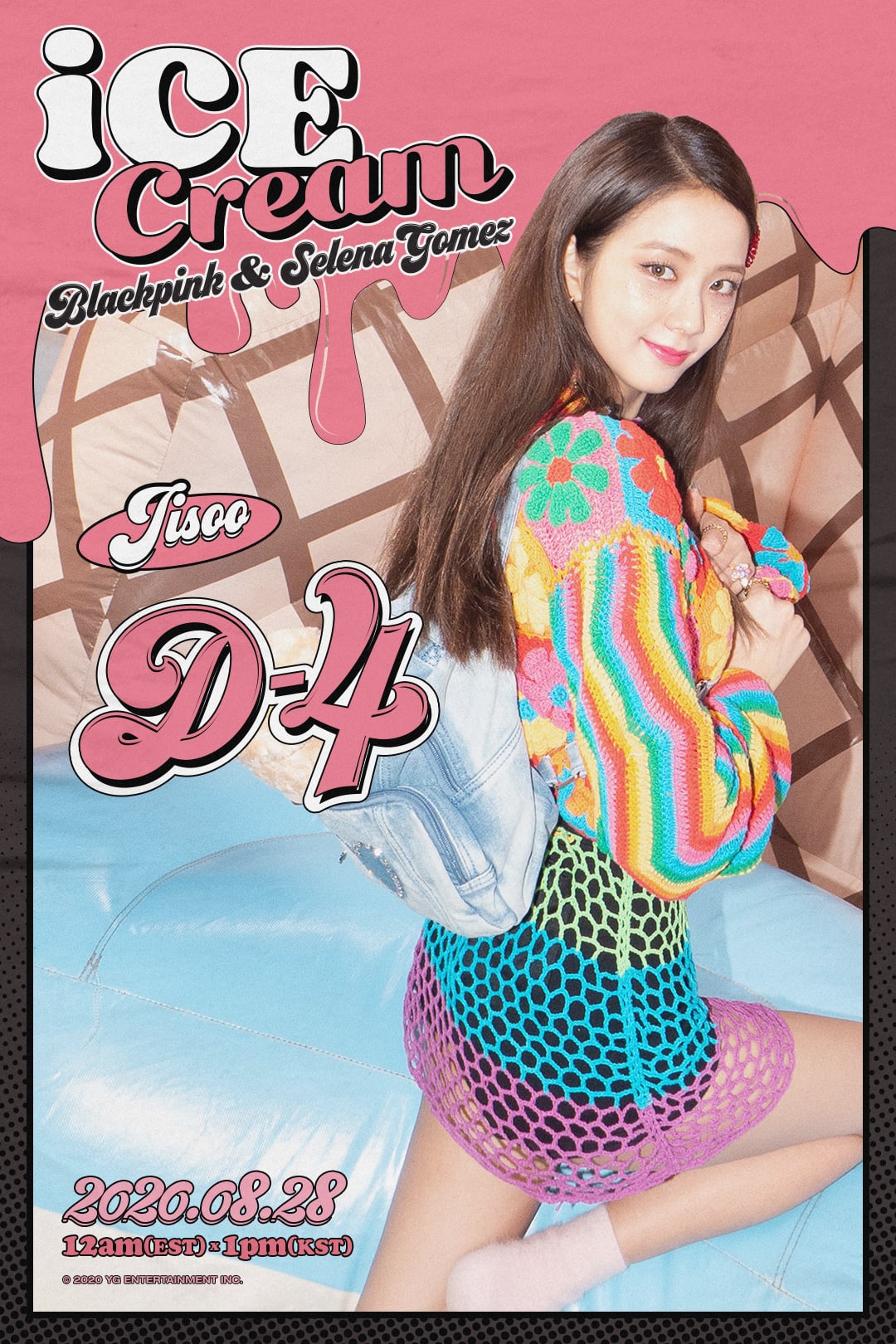 Also check out the video call teaser released earlier in the day!

BLACKPINK has released a new teaser poster for their collaboration with Selena Gomez, which announces that the song is titled “Ice Cream”! 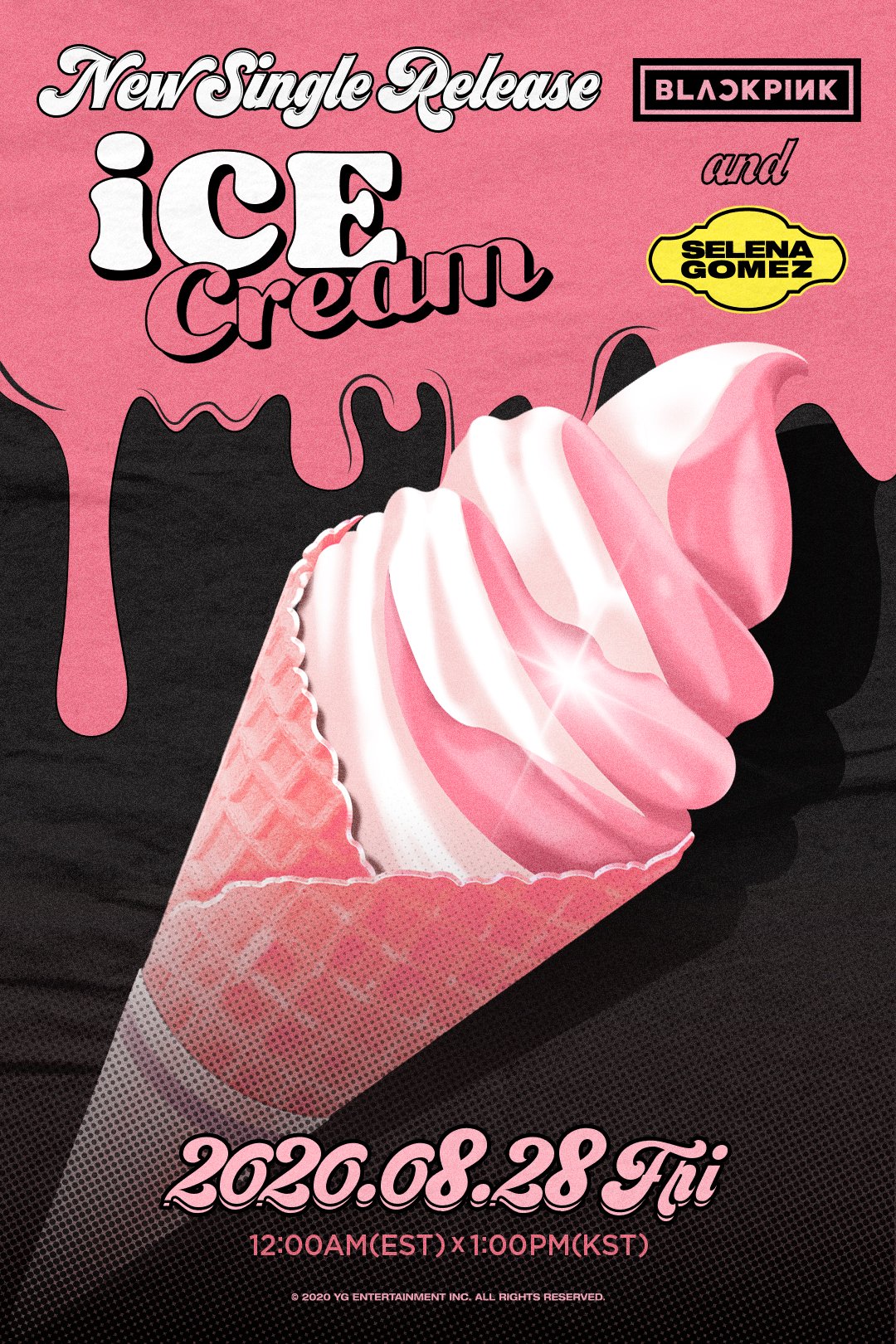 Previously, Selena Gomez posted a photo of a pink car with a license plate that says, “Selpink,” making fans wonder if she will also appear in the music video for the single.

A YG source stated, “Please understand that we cannot tell you anything about the new song’s music video yet.” However, the source gave clues about what the music will sound like, saying, “It will be a very refreshing song that’s perfect for the hot peak of summer. BLACKPINK has been showing the swag of hip hop-based music with a warrior-like image, but the new song expresses more of their refreshing and lovely charms.”

BLACKPINK has revealed a new teaser for their upcoming single with Selena Gomez, depicting their collaboration as twin popsicles, each with their own flavor. 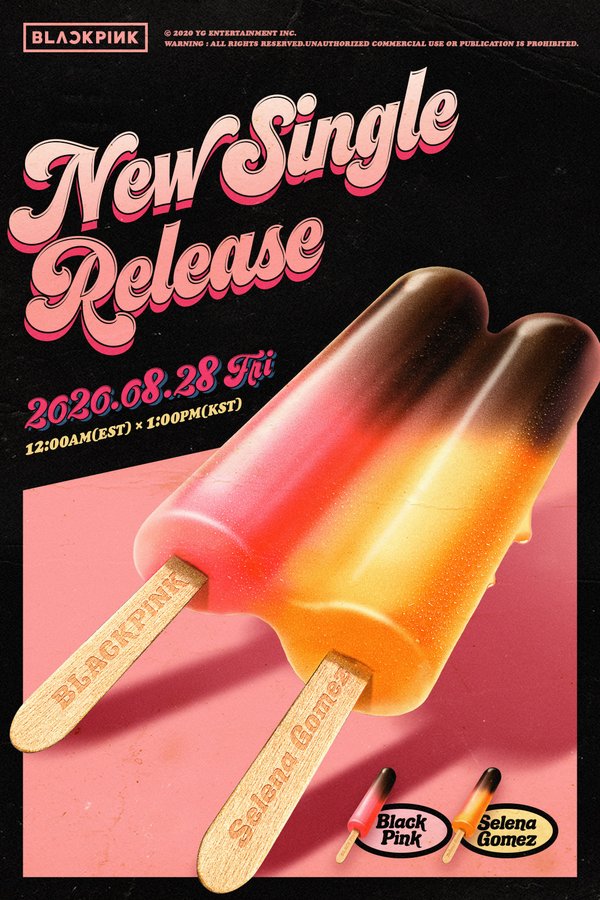 With their latest teaser, released August 12 KST, BLACKPINK has confirmed that the artist featuring on their upcoming single is Selena Gomez! The single is scheduled for release on August 28 at 1 p.m. KST (12 a.m. ET). 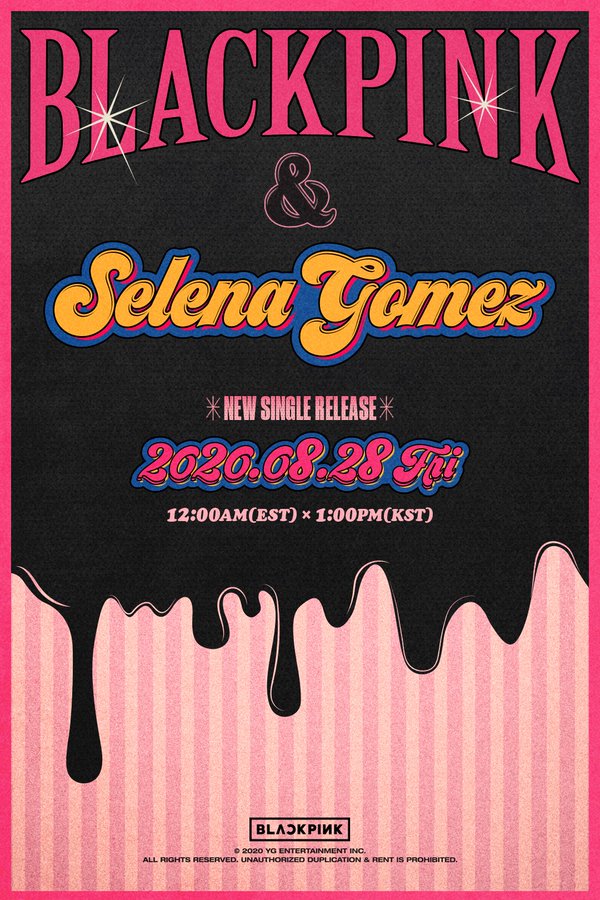 BLACKPINK has unveiled a new single teaser, announcing that the release date has been set for Friday, August 28. 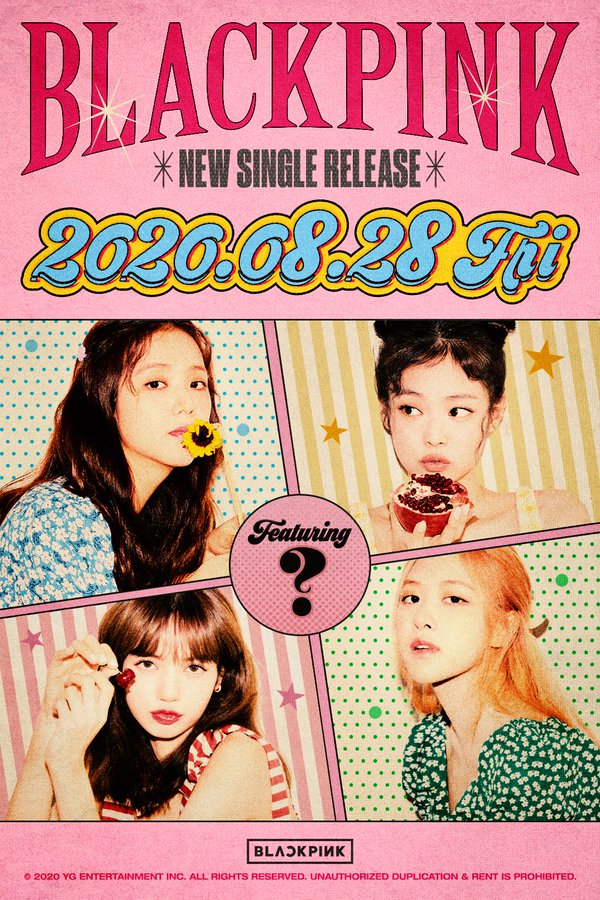 BLACKPINK is gearing up for their next single!

Intriguingly, the teaser hints that the new single will have a featuring artist, who remains unnamed for now.

The new single will be released in August. 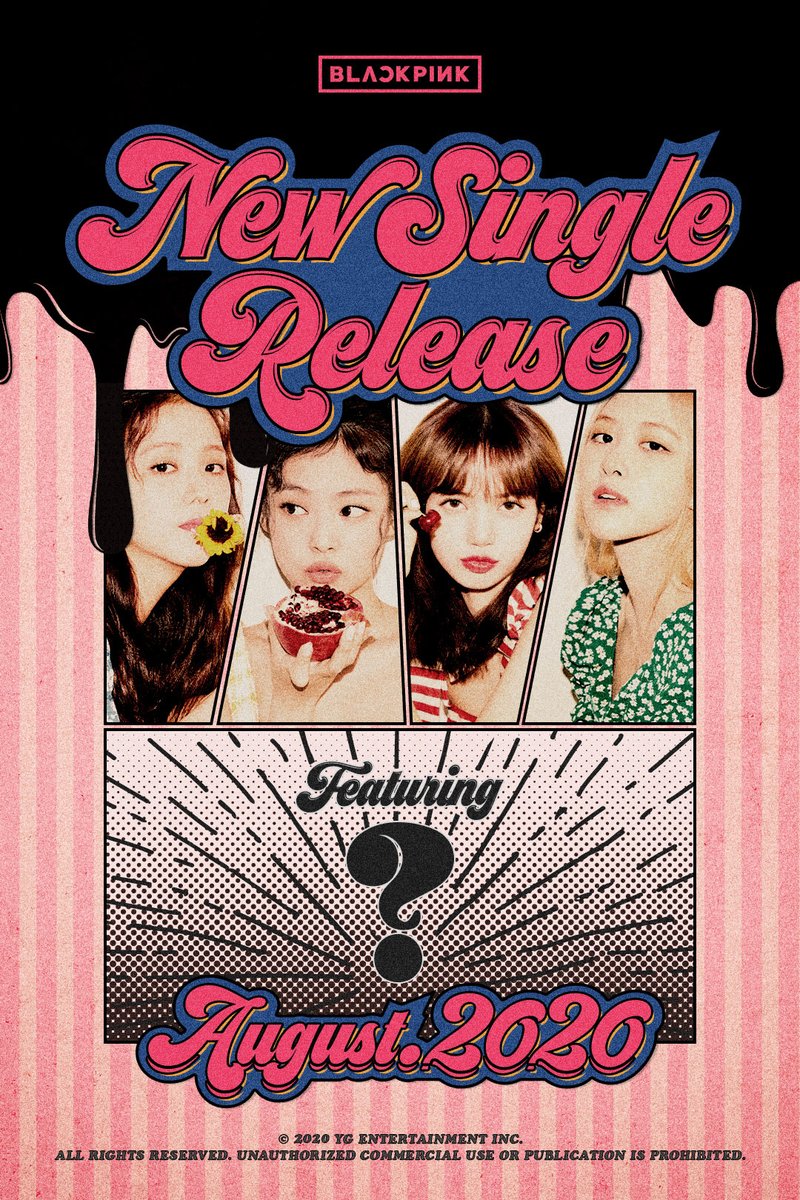 Earlier this year, YG Entertainment revealed that BLACKPINK would be making a three-part comeback, starting in June (“How You Like That“) and culminating in the release of the girl group’s first full-length album in September. This new single is the second step in BLACKPINK’s comeback plan, which also includes solo releases for the members later this fall.