Summer is here, and that means we’re enjoying the beautiful sunshine and eating tons of yummy ice cream. If you’re like me, you enjoy staying inside with the AC on blast and watching the latest dramas. With the whole ongoing pandemic, I’ve naturally had more time to watch many of the latest C-dramas that have been released this year. If you’re feeling overwhelmed from all the drama options, then your feeling is valid, because so far, twice as many C-dramas have aired this year compared to 2019. As many of us are stuck home these days, it’s not surprising broadcasters chose to release more shows during this time. There are many great dramas to watch, with something for everyone from historical, office romance, crime investigations, sports, to fantasy genres. Check out my list of drama recommendations to add to your summer binge list below! 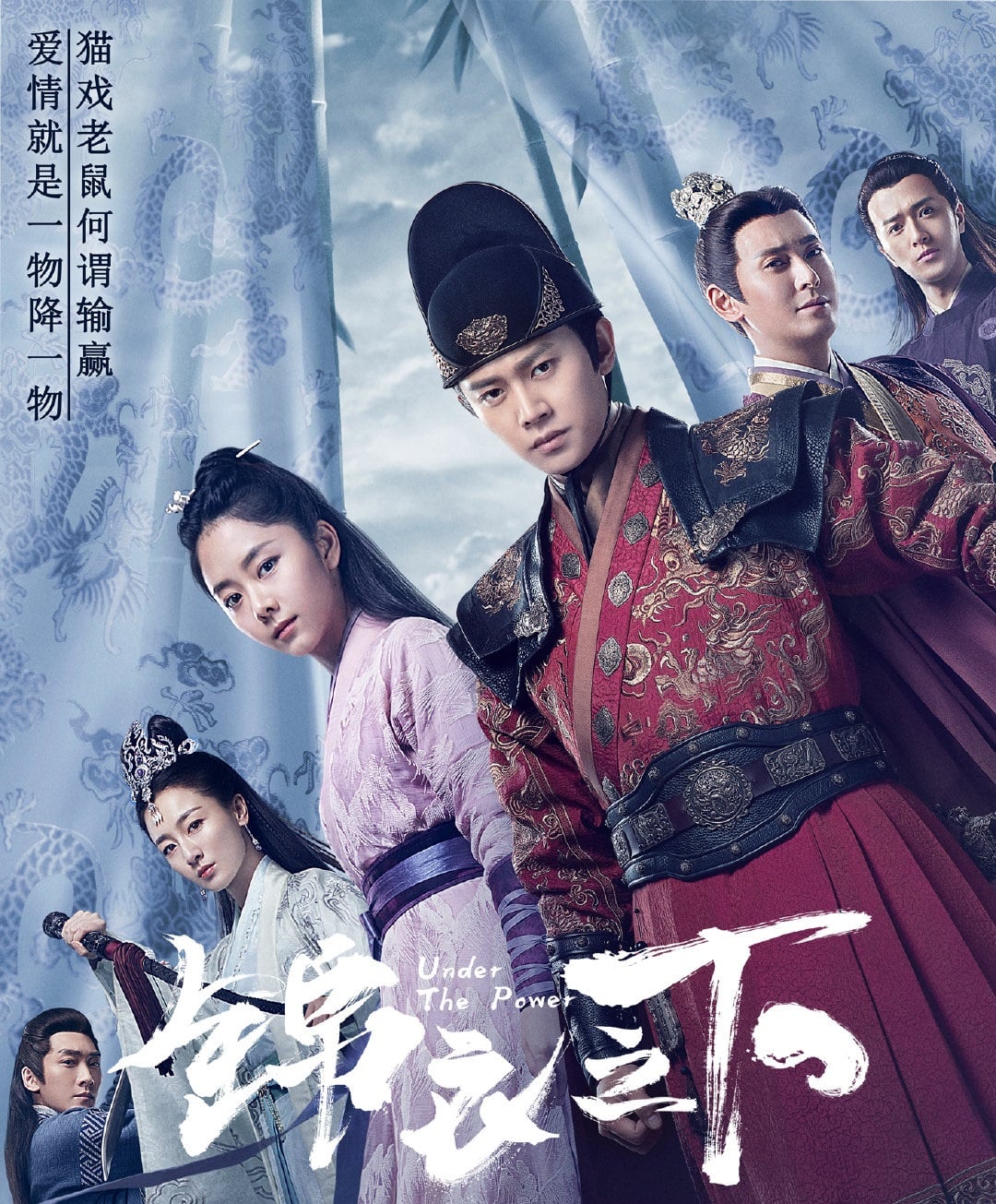 If you’re a fan historical dramas, you should check out “Under the Power” starring Ren Jia Lun (Allen Ren) and Tan Song Yun. Set during the Ming Dynasty, Lu Yi (Ren Jia Lun) is the head of the Embroidered Uniform Guards, and he is commissioned by the Emperor to investigate the crime of missing government funds that were set aside to repair the Yangzhou River. Jin Xia (Tan Song Yun) is a talented police constable in charge of investigating crimes in the city. Despite always butting heads with Lu Yi in the past, she is tasked to assist him in locating the stolen funds. The duo put aside their differences and end up being a formidable team. Romance blossoms between the pair as they dig deeper into the case, but Jin Xia discovers the truth about her tragic past, leading her to ultimately choose between revenge for her family or love. 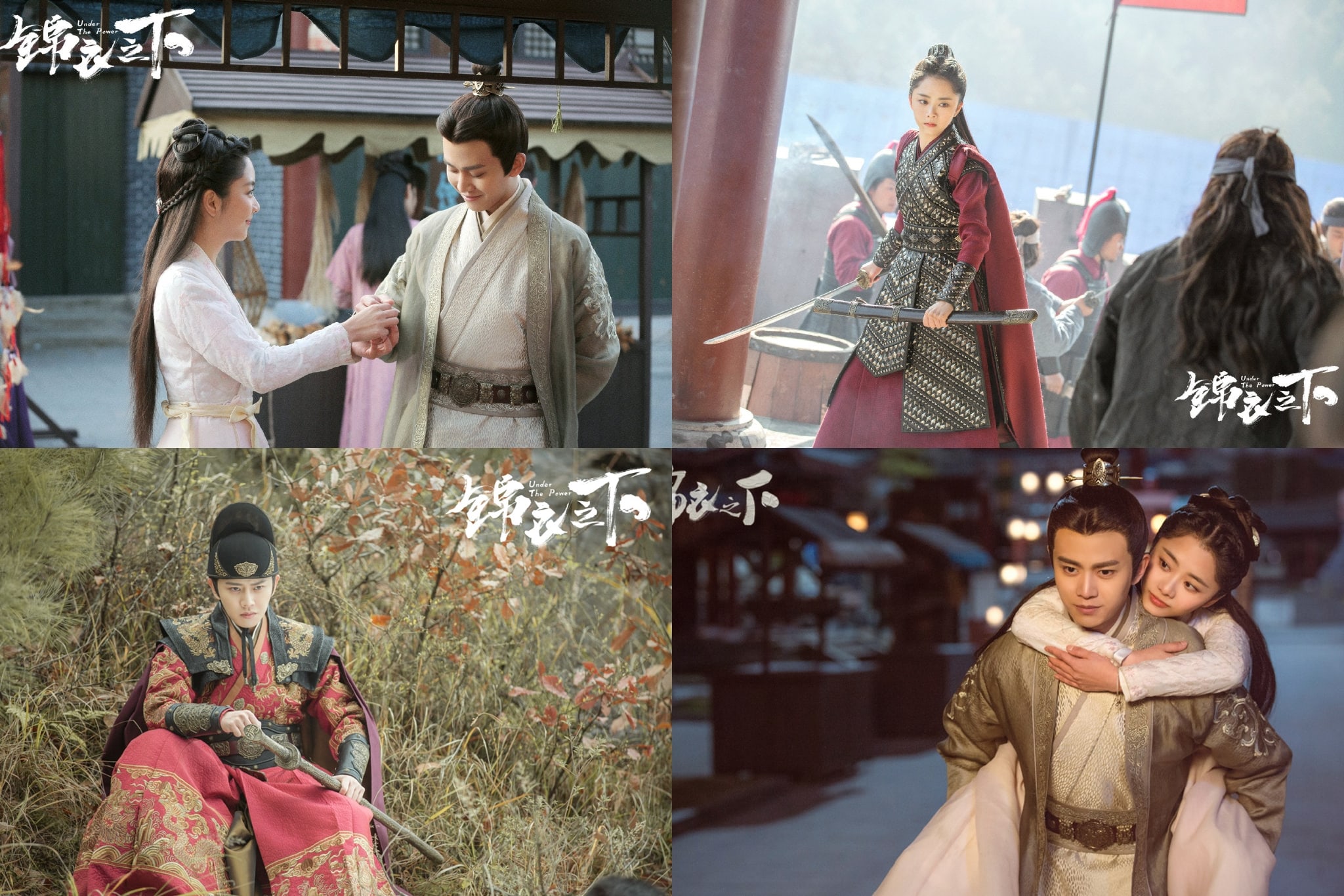 Although the drama is an investigative crime procedural, the biggest draw of “Under the Power” is the romance and incredible chemistry between our leads, Jin Xia and Lu Yi. Both are refreshing characters with thoughts and beliefs ahead of their time. Jin Xia is independent, rebellious, strong, and does not care for marriage, which directly goes against the societal norms expected of women at the time. Although Lu Yi is a high ranking official, he wants to marry for love and does not care for differences in social status. Even though Lu Yi has a no-nonsense demeanor, he’s actually a capable, smart, and upright person, leading to him often clashing with powerful figures in the royal court.

Our OTP really complement each other, as Lu Yi is calm and strategic while Jin Xia is meticulous and resourceful, forming an impressive team to solve crimes and mysteries. Their moments together as a couple are so preciously sweet and beautiful. Both are always willing to sacrifice their lives to protect the other, and their love for each other is incredibly sincere and moving. Your heart will definitely melt when you witness the way Lu Yi looks at Jin Xia with his warm and otherworldly gaze.

Start watching “Under the Power”: 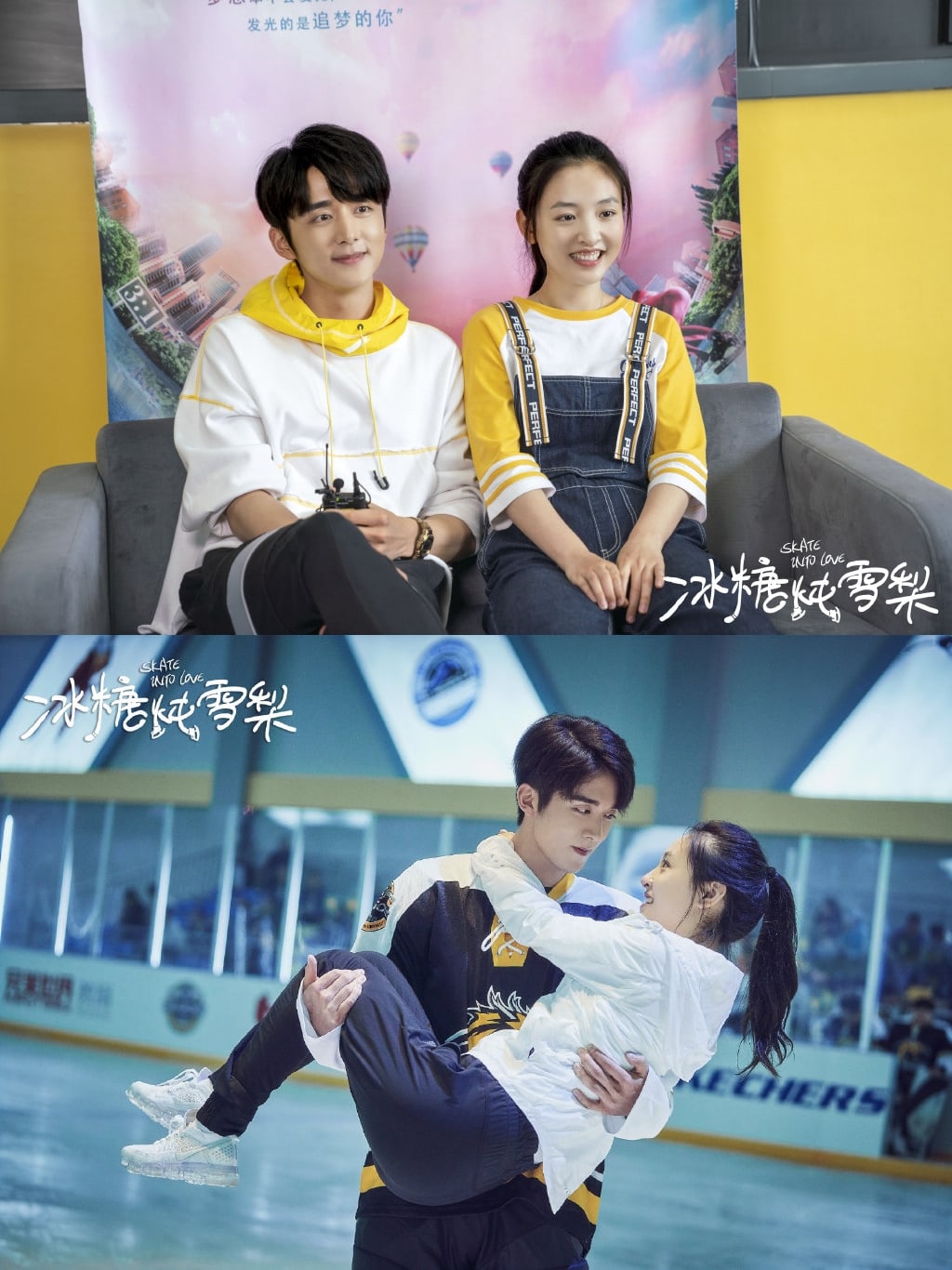 For sports romance fans, “Skate Into Love” is a definite must watch! Li Yu Bing (Zhang Xin Cheng) is a popular sophomore student at Lin Cheng University and is the school’s star hockey player. He meets his former classmate from elementary school and former speed skater, Tang Xue (Wu Qian), who used to bully him. Taking the opportunity to seek revenge, Li Yu Bing pulls some strings to get Tang Xue to become his assistant. It’s a constant bickering relationship between the two, but over time Li Yu Bing realizes he may have misunderstood Tang Xue and that his love of being on the ice was heavily influenced by her. A sweet romance blossoms between the two as Li Yu Bing encourages and helps Tang Xue pursue her speed skating dreams again. 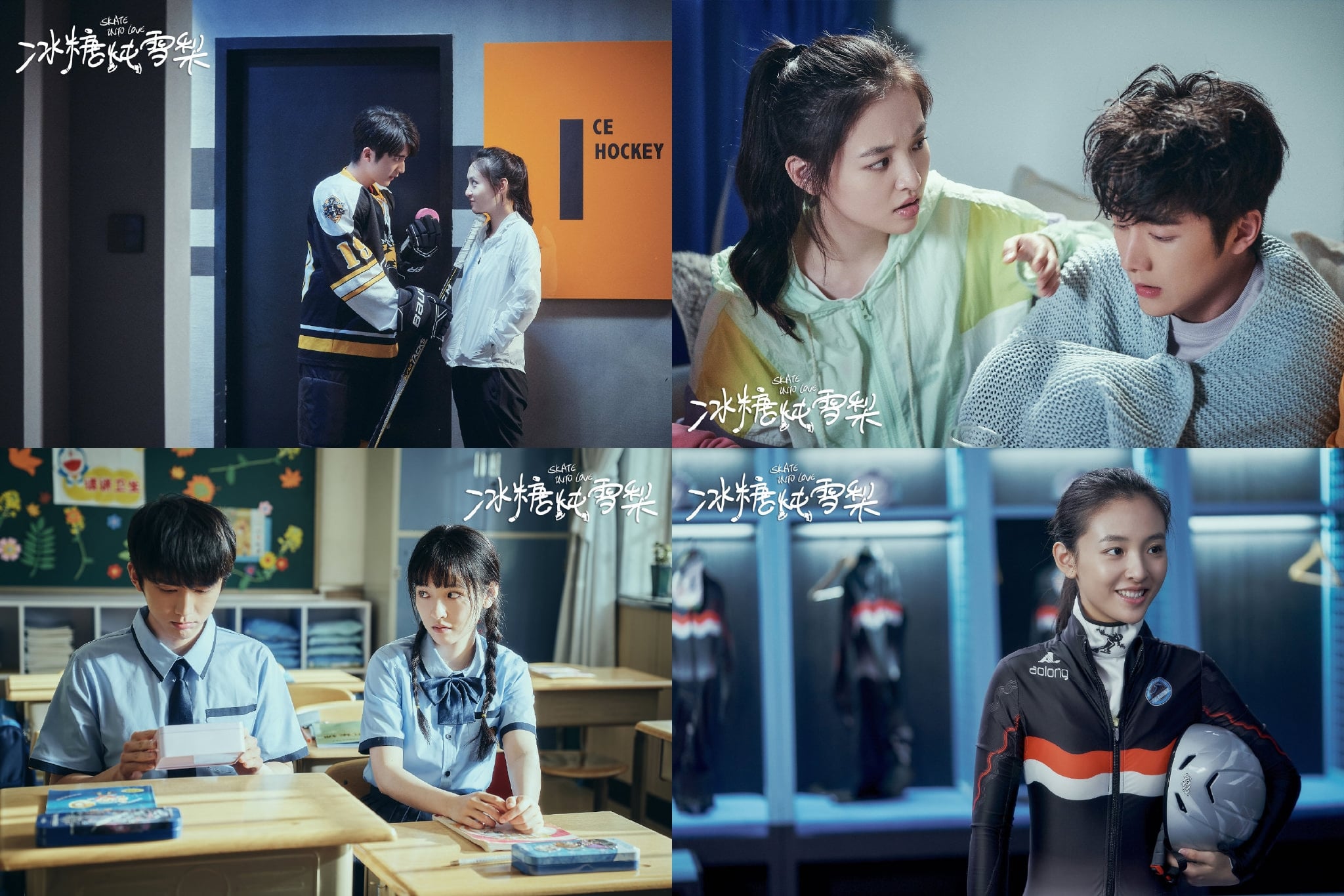 If you’re feeling like you’re in a rut, “Skate Into Love” is the perfect drama to feel inspired to follow your dreams and do what you love. You can’t help but feel encouraged and moved by Tang Xue and Li Yu Bing’s determination and dedication as they literally shed blood, sweat, and tears to be professional athletes on the ice. Our OTP is an excellent couple because they continuously inspire and provide unwavering support for each other’s dreams during their difficult journeys. The chemistry between Wu Qian and Zhang Xin Cheng is undeniably natural and sweet. They wonderfully portray a romantic relationship that inspires you to be the best version of yourself. One technical aspect I really enjoyed about “Skate Into Love” is how they filmed the sports scenes. They way the camera captured Tang Xue speed skating or Li Yu Bing shooting a puck is completely exhilarating and fast-paced, making it feel like you’re on the ice with them.

The Romance of Tiger and Rose 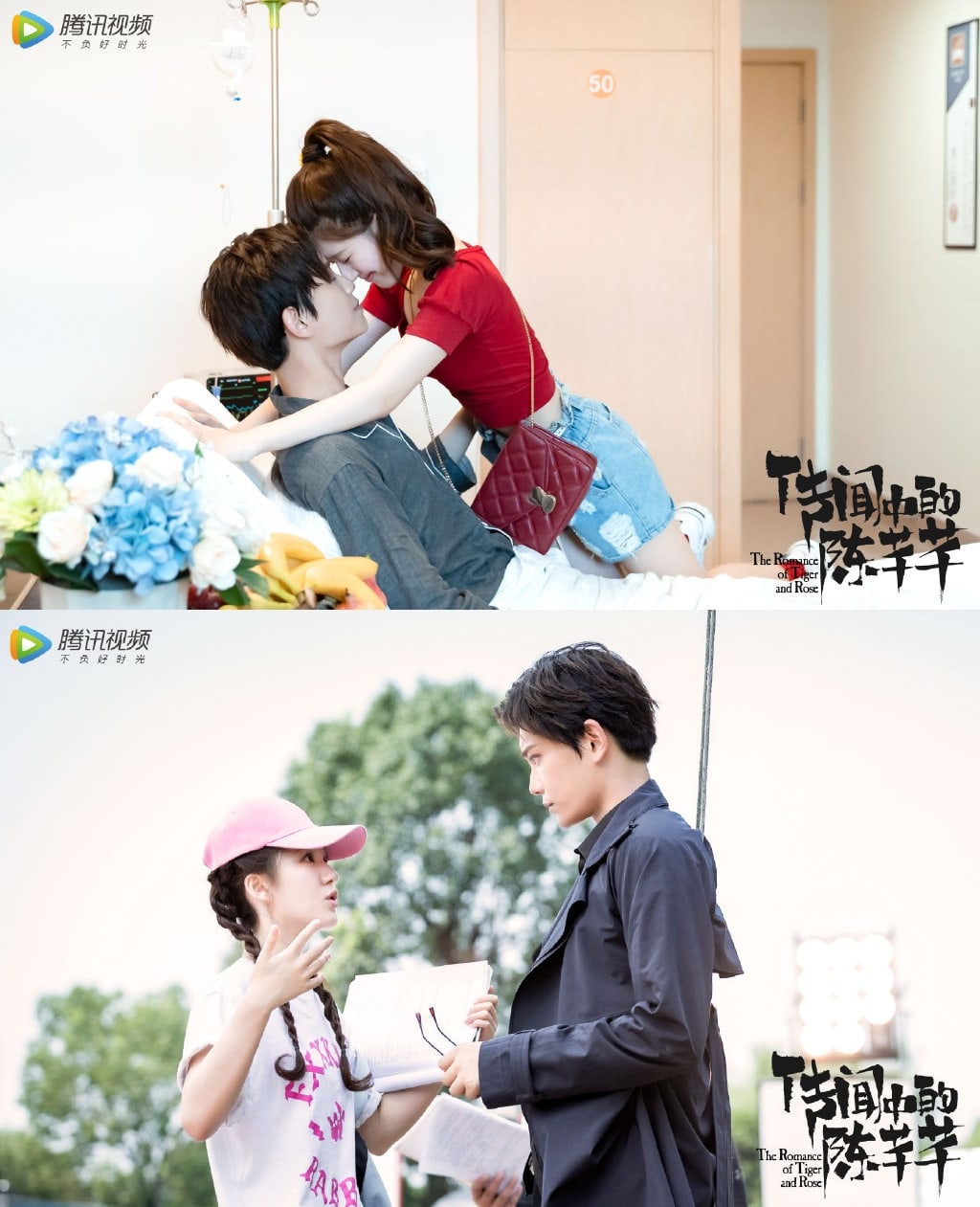 If you’re looking for a good laugh, you definitely need to check out “The Romance of Tiger and Rose.” Chen Xiao Qian (Zhao Lu Si) is an unknown rookie screenwriter who worked tirelessly to complete the script of a historical drama featuring the epic story of a grand heroine. Filming is delayed for the drama as the lead actor, Han Ming Xing (Ding Yu Xi), keeps questioning the script. Xiao Qian is mysteriously transported into the pages of her own story, and she has become the Third Princess, Chen Qian Qian, a minor character who is supposed to die in the third episode. Desperate for survival, Chen Xiao Qian does whatever she can to not die and find her way back home. In doing so, she unintentionally alters the plot of her own story and ends up being the lead female character stuck in a love triangle with Prince Han Shuo, (Ding Yu Xi) and the Minister of Education, Pei Heng (Shen Ying Hao). 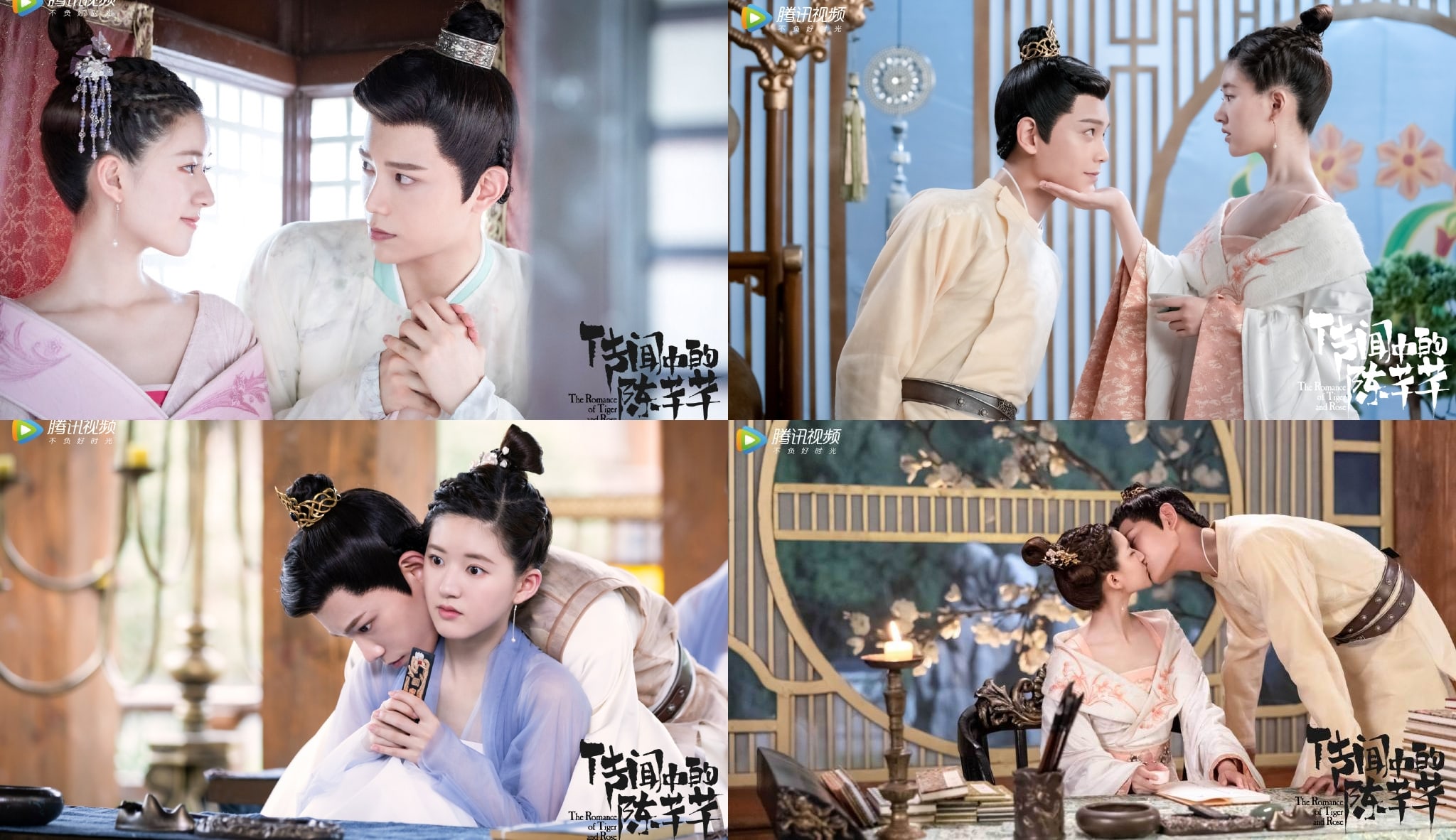 “The Romance of Tiger and Rose” had a large following in China and internationally for its fun and creative storyline. It’s a hilarious drama as it presents a unique way of poking fun at typical drama tropes/cliches by highlighting bad writing and stereotypical characters. The show also cleverly weaves in social commentary on issues relating to women, such as women’s rights, gender inequality, and low birth rates. It’s fun to see Chen Xiao Chen realizing she’s a terrible writer and often breaking the fourth wall throughout the drama to point out her character tropes like the rich male lead, hero saves the beauty, or even death by poison.

Of course, the big draw of the drama is the electrifying chemistry between our leads Chen Qian Qian and Han Shuo, played by Zhao Lu Si and Ding Yu Xi. If I were to give them a chemistry rating, it would be A+, as they act so well together and look so natural onscreen together, giving the feeling they’re a real couple deeply in love.

Start watching “The Romance of Tiger and Rose”: 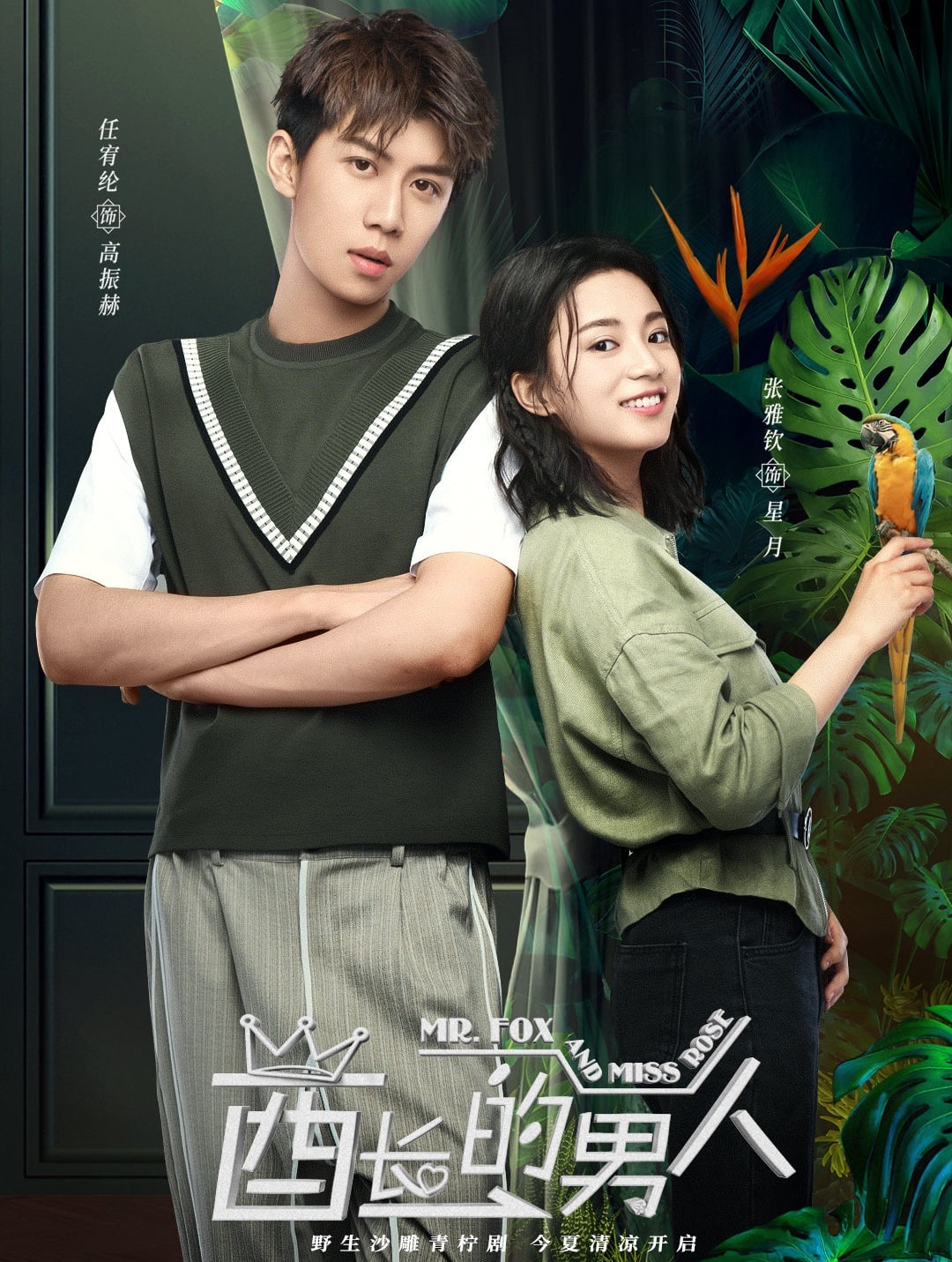 Another fun drama to add to your list is the modern romance, “Mr. Fox and Miss Rose” starring Ren You Lun and Zhang Ya Qing. Gao Zhen He (Ren You Lun) is a jewel hunter who earns his living by traveling the world in search of the rarest gems. Known to be a shrewd businessman, Gao Zhen He doesn’t shy away from danger in order to obtain high-end gemstones that will sell for the highest price. During one of his expeditions, Gao Zhen He accidentally falls off a cliff and is left in a dire situation as he’s injured and alone. Thankfully, he ends up near a primitive tribe and the tribe leader, Xing Yue (Zhang Ya Qing), rescues him. Gao Zhen He discovers that the tribe possesses the Star Stone, one of the rarest gems in the world, and he agrees to marry Xing Yue as a means to obtain it. Once he acquires the gem, Gao Zhen He flees back to the city. Not letting him go easily, Xing Yue tracks him down in the city and is determined to get back what is rightfully hers. 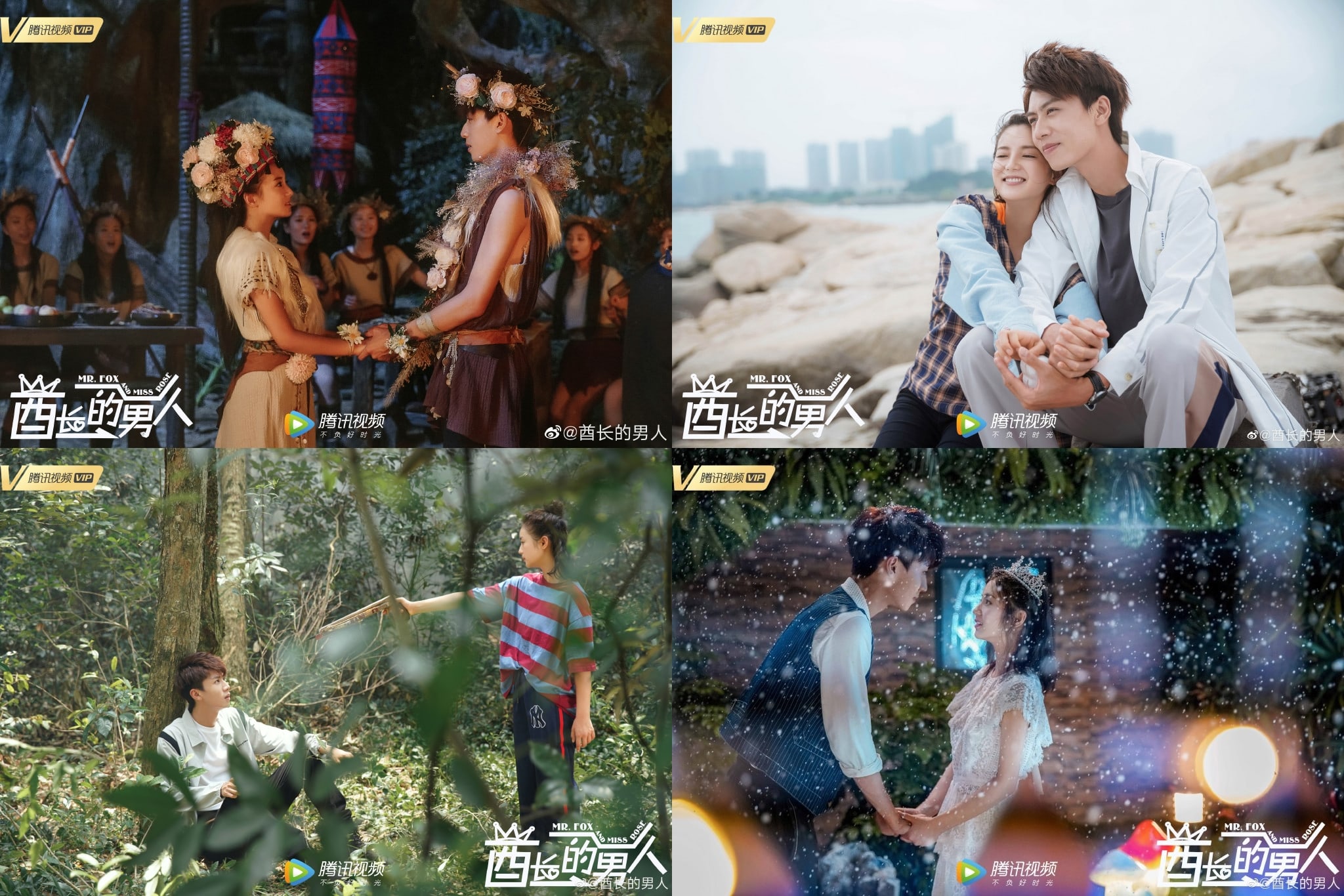 The star of “Mr. Fox and Miss Rose” is definitely our female lead Xing Yue, who has hilarious antics as she learns to adapt to the modern world. Growing up in a matriarchal tribe, Xing Yue is fiercely independent, strong, outspoken, and does not know how to tell lies. She’s a ray of sunshine with her genuineness and positivity, and it’s exactly what Gao Zhen He needs in his life. Our male lead Gao Zhen He is an interesting character, as he isn’t afraid to manipulate people and use deception to obtain his goals, but deep down he’s a kindhearted person who fell victim to an unfortunate childhood. You can say Xing Yue and Gao Zhen He are opposites, but they’re exactly what the other needs as they learn how to love and grow as people. The drama has many different elements, including action, suspense, friendship, and an adorable romance between Xue Yue and Gao Zhen He to keep you glued to the screen.

If you enjoy office romances, “Parallel Love” might just be for you. Lin Miao (Shi Shi) is an outstanding events manager who accidentally time travels back to 2010. In order to return back to 2020, she is given the mysterious task of helping Jiao Yang (Li Hong Yi) become the president of his father’s company Hongyu Group within three months. If Lin Miao fails to complete her mission, she will disappear forever. The two immediately dislike each other from the start with their boss and employee relationship. However, feelings start to grow between the two as Lin Miao helps the inexperienced young executive find his worth while they work together solve to workplace crises. 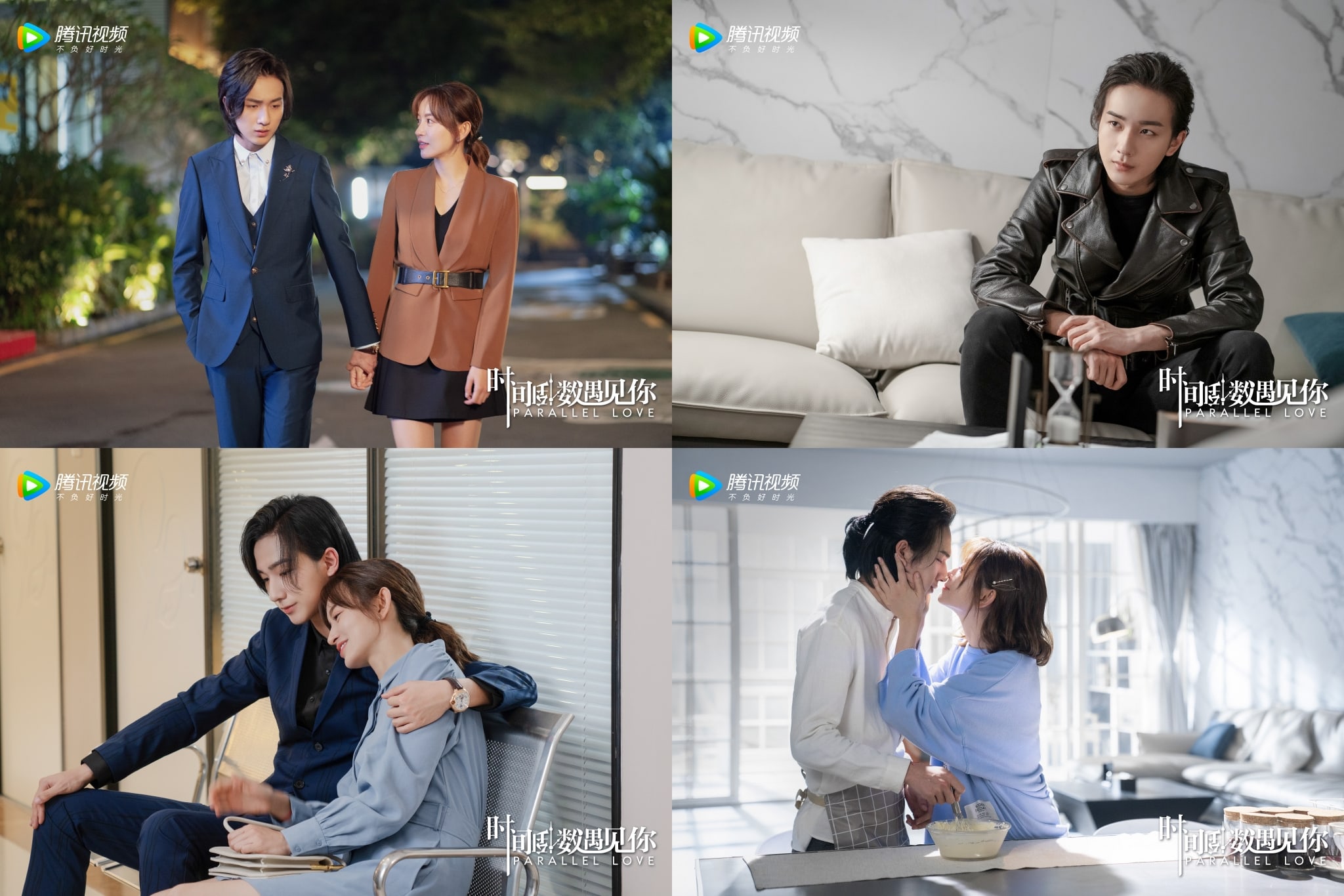 If you’re in the mood for noona romances (or in this case jie jie romances), “Parallel Love” may tickle your fancy. You’ll surely quickly fall in love with Jiao Yang, who is not your typical rich, arrogant, tsundere male lead. Although he lacks business experience, he’s actually a kindhearted and caring guy who unexpectedly pays close attention to those around him, especially his employees, whom he has a great relationship with. He falls for Lin Miao quite early on despite the rocky start in their relationship. Lin Miao is the older, mature, and accomplished career woman, and she is the perfect person to support Jiao Yang against the company’s shareholders who want to oust him. The character development is great as you see Jiao Yang grow to become a confident, dedicated, and savvy businessman and the workaholic Lin Miao grow to become a happier, stronger, and vibrant woman.

Initially, Lin Miao sees Jiao Yang as an immature young guy, but over time she realizes he’s actually an intelligent, loving, and devoted man. Together they form a great team as they face various corporate obstacles thrown at them courageously and smartly. Despite the eight year age gap, their romance completely transcends time and space, and you’ll surely be touched by the loyalty, tenderness, and love between our OTP. A quote from the drama that perfectly sums up their story: “Jiao Yang, even if time flew backwards, even if we never meet again, please remember that someone named Lin Miao loves you very much.”

Hey Soompiers, what dramas are you watching this summer? Let me know in the comments below!

Currently watching: “Dance of the Sky Empire,” “Just an Encore,” “Gank Your Heart,” and “Was it Love?”
All-time favorite dramas: “Nirvana In Fire,” “Queen In Hyun’s Man,” “A Witch’s Romance,” “Love O2O,” “Skate Into Love” and “My Mr. Mermaid”
Looking forward to: “Go Ahead,” “Glory of the Special Forces,” and “The Oath of Love”