Park Bo Gum features in a stunning pictorial and insightful interview as he graces the cover of the August issue of Vogue Korea!

The photo shoot took place in the Secret Garden at Changdeokgung Palace in Seoul, at Park Bo Gum’s request. “I wanted to show the beauty of Korea,” explained the actor, whose crown prince character in the 2016 drama “Love in the Moonlight” had walked the garden with his father. 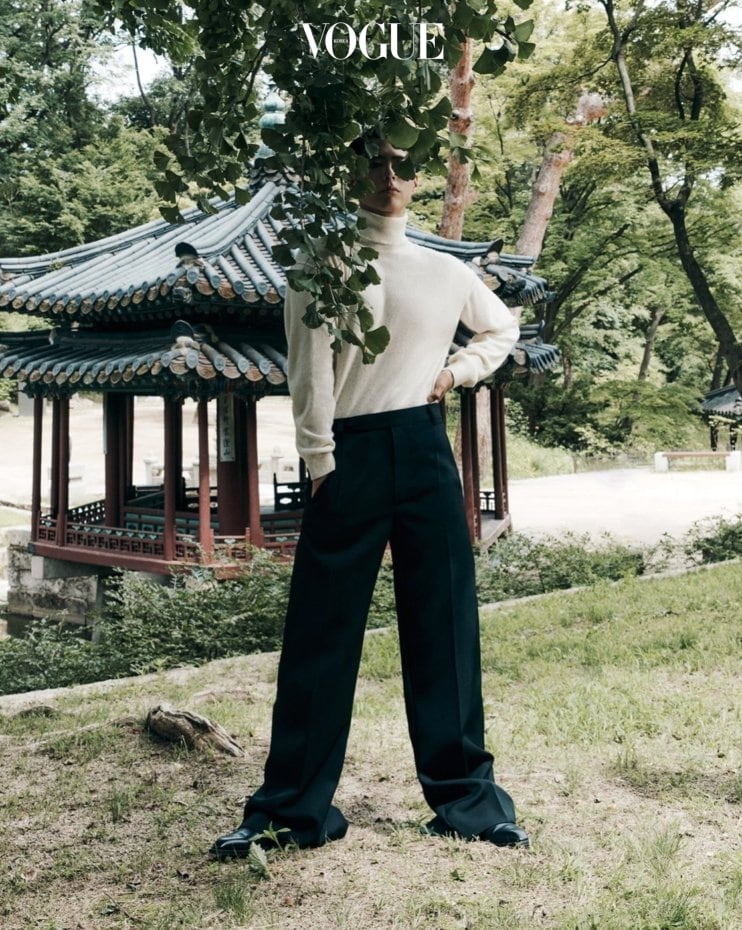 “I was grateful to have the chance to hold an autograph event at Gyeongbokgung Palace to fulfil a ratings promise back then,” he said. “I became more interested in Korea’s traditional culture while wearing so many beautiful hanbok [traditional Korean outfits] for the drama. I wanted to show the beauty of Korea to the global readers of ‘Vogue.'” 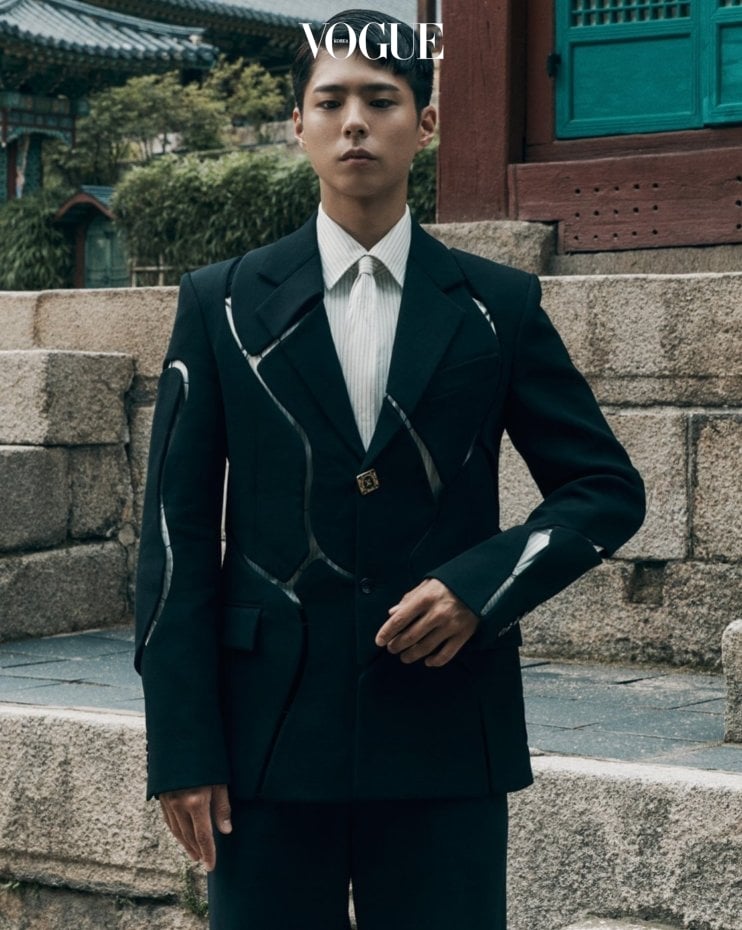 Although Park Bo Gum is enlisting for mandatory military service in August, he’s leaving behind three works for his fans to enjoy during his hiatus. One is the drama “Record of Youth” co-starring Park So Dam, and he also has the films “Seo Bok” and “Wonderland” coming out.

“All the characters in those three projects are different,” he said. “I think I’ll be able to show different sides of myself again through them. You might think during my hiatus, ‘Wow, Park Bo Gum is playing that kind of role?’ ‘He had this side to him too?’ and ‘I want to see even more of what he can do.'” 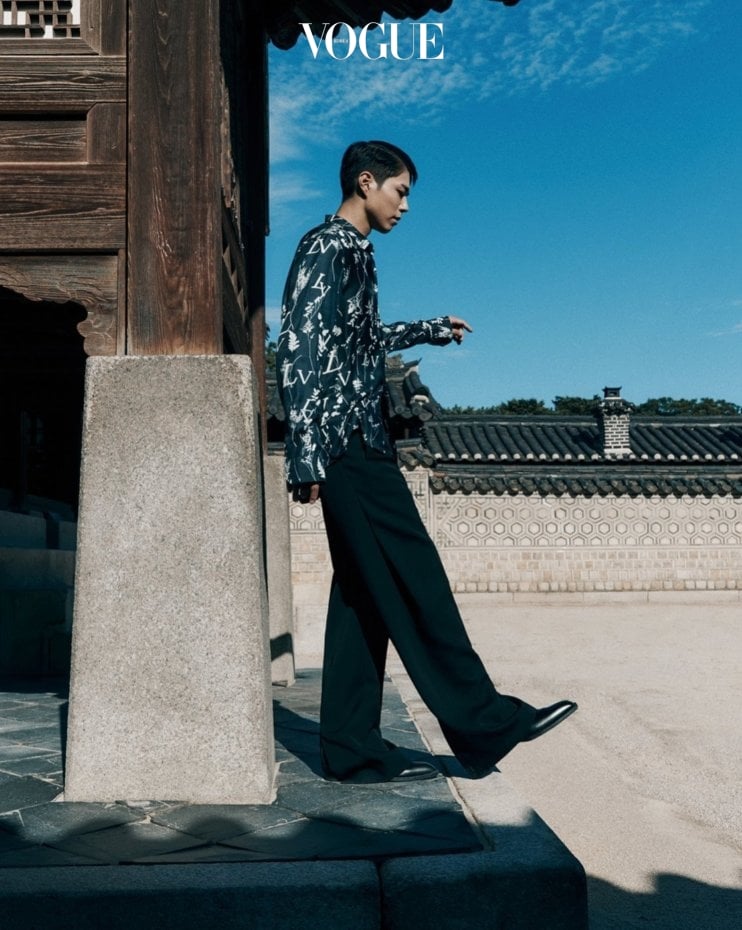 Vogue described that the young actor looked excited and confident as he spoke. “I’m full of confidence because I think I can do well,” he said. “I’d been really wanting to try to pull off new and different genres. There’s an image of me that I don’t know, and one that people expect of me. I want to keep growing at the same time as fulfilling their expectations.”

The magazine also included a charming quote from the person in charge of Park Bo Gum’s management, who has worked with the actor for eight and a half years and can attest to the truth behind Park Bo Gum’s famously great personality. They said, “Bo Gum doesn’t even chew on his straws or fold down his sneakers. He keeps everything neat and tidy too. If we go on an overseas tour, then he even checks the staff’s rooms at the end to make sure no one’s left anything behind.”

Park Bo Gum shared some insights into what he looks for in a project, explaining that one of his main goals is for viewers to feel moved and comforted when watching his works.

“I’m always hoping that projects will present some kind of message, rather than being intended as a way for people to simply spend time or to make them laugh and then just move on,” he said. “I’m good at playing villains and want to do well at that too, but I don’t want to just take on the role of a killer without a reason.” 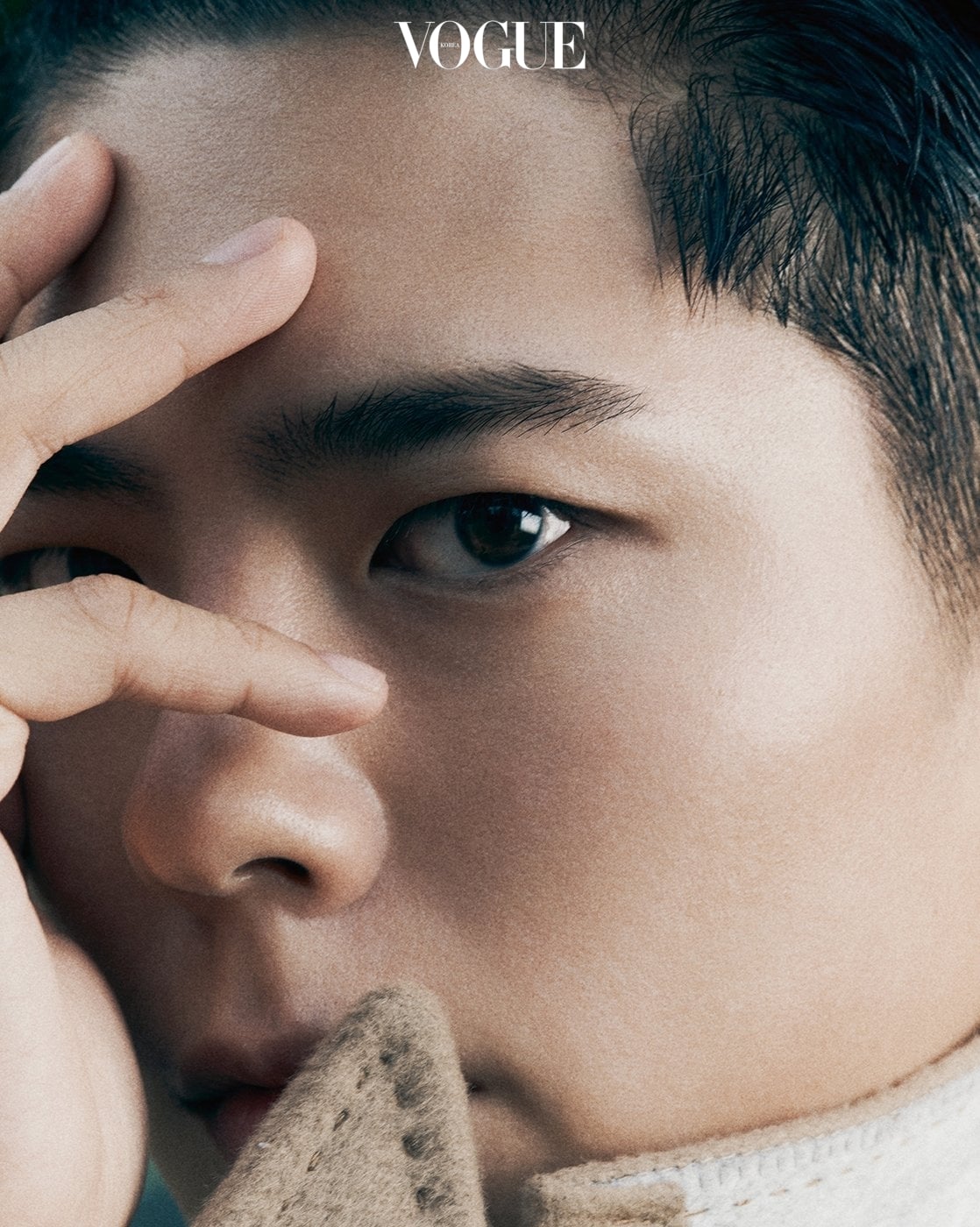 The actor went on to talk about how he’s currently changing as a person.

“I used to be a ‘yes man’ who would say that everything was fine, even if I hated it,” he said. “I didn’t want to hurt other peoples’ feelings so I tried hard to always be considerate of others. But lately I’ve realized that in order for the other person to understand completely, I have to clearly state what I want and don’t want. When my consideration becomes taken for granted, then it’s stressful. I’m currently trying to master the art of clearly expressing how I feel.”

He explained that his character Sa Hye Joon in the drama “Record of Youth” has given him insights into how to communicate. “I’ve learned a lot from the characters I’ve played,” he said. “Sa Hye Joon is someone who’s very honest, rational, and independent. He knows his own mind and he clearly conveys what he wants to say. It made me think, ‘I should live my life like this too.'” Vogue noted that of course, he’s not planning to change his kind personality.

Park Bo Gum also shared how he’s prepared to play a model in “Record of Youth.”

“I did worry since the character’s a model,” he said. “I’d learned how to walk on a runway, but I heard that lately things aren’t as standardized as they were in the past. People walk in a free, casual, or simple way. I’m working hard while looking at runway videos and magazine photo shoots, as well as paying attention to the models I’m acting with.” 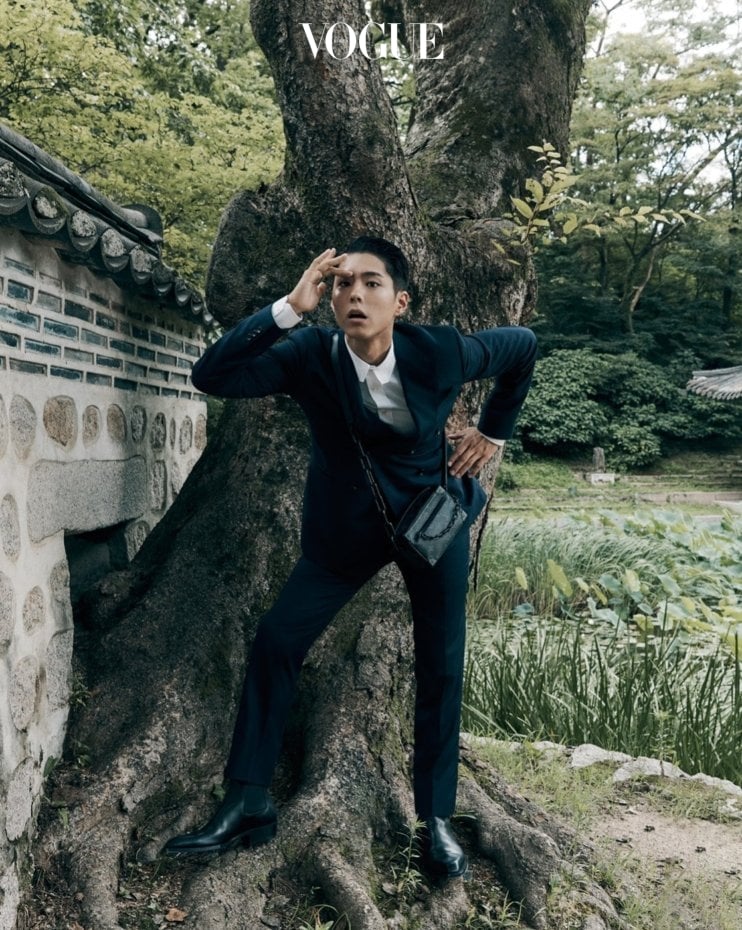 “It’s a film that allows us to think about the dignity of humanity, and it carries the message that humans shouldn’t become overly ambitious,” he said. “It also allows us to think about the advancement of life science technologies.” He said with a laugh, “Seo Bok has a neat and healthy look.” He shared that the name of the character means “Live peacefully and for a long, long time.”

“Since the character doesn’t have big emotional changes, it was difficult to act with detail,” he said. “I was able to learn a lot on set while working with the director and Gong Yoo.”

“I found that Gong Yoo is very good at immersing himself in the moment,” he said. “I once asked him for advice on how to act angry. He told me that if you just confidently let out a yell, then that feeling comes to you. There are also times when an actor feels embarrassed about expressing some emotion because even though it’s important to have had the character’s previous emotions built up beforehand, you can’t film everything in order like that. He told me that in times like that, using mind control is important.” 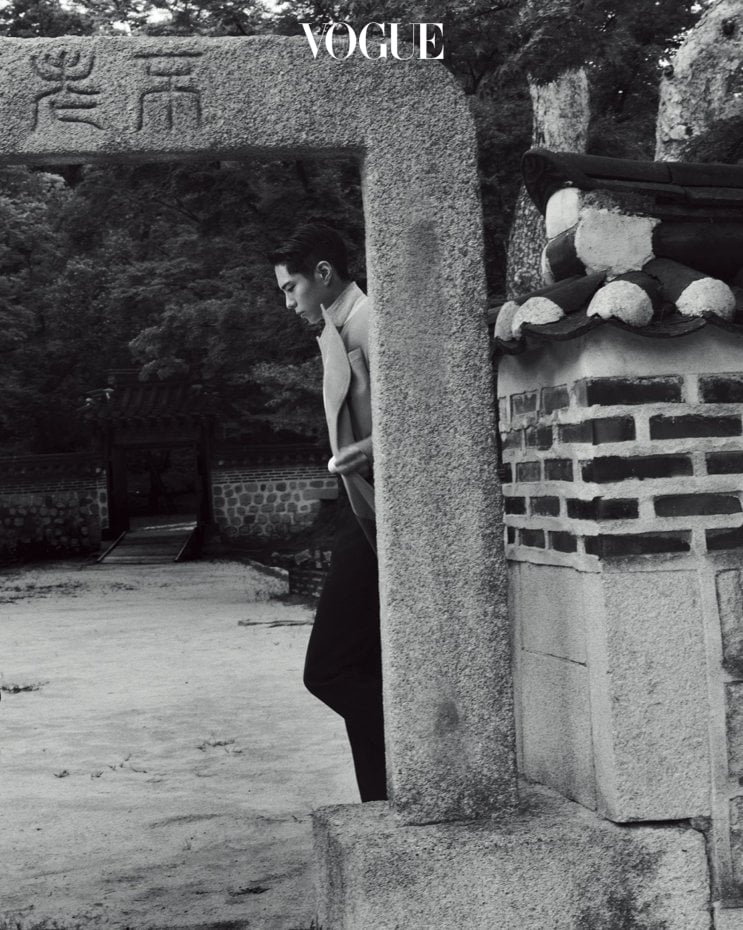 The reporter wrote that Park Bo Gum approaches every moment with an attitude of thankfulness. When asked what he has to do before he goes to the military, Park Bo Gum said that he wants to get together with the people he’s grateful for and treat them to a meal.

After being asked about his MBTI (Myer-Briggs Type Indicator), Park Bo Gum checked his phone and shared that he’s ESFJ-A, which is known as a “sociable diplomat.” Vogue noted that one of ESFJ-A’s characteristics is confidence, which would be helpful to him as an actor.

“Since I was a kid, I played piano and sung hymns at church,” he said. “More importantly than that, when I was really small, my dad would record everything I did on a camcorder, so I was never awkward in front of a camera. I was born with the confidence to enjoy dancing and acting cute.” 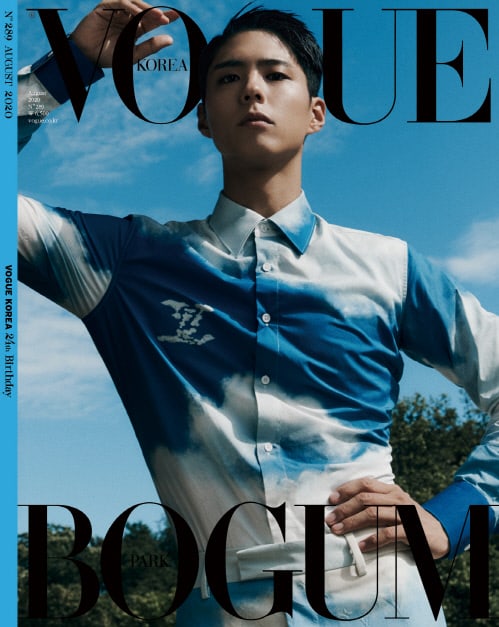 One of Park Bo Gum’s first acting roles was in the drama “Wonderful Mama” with Bae Jong Ok. “We played a mother and son,” he said. “At one point, I was looking in her eyes while we acted, and it suddenly felt like it was really my mother speaking to me. That’s when I realized why acting is so fun. There have been moments like that in every project. One way to describe it would be that it’s electrifying. An emotion comes to me when I look in their eyes, and there are moments like when my co-star laughs so I start laughing too. Sometimes I experience new things through my character and feel emotions I’ve never been able to have before.”

Park Bo Gum went on to share that he’s continued his love for music by playing piano whenever he wants to clear his thoughts, and he sometimes records new songs. He described how writing songs makes him feel the joy of creating music, but he added with a laugh, “Once I make one, I often think, ‘Is this actually a melody I’ve heard somewhere before?'”

“It might be because I’ve played the piano since I was young, but when I get married and have a child, I definitely want to teach them to play the piano,” he said. “Learning other instruments is easy if you know how to play the piano.” 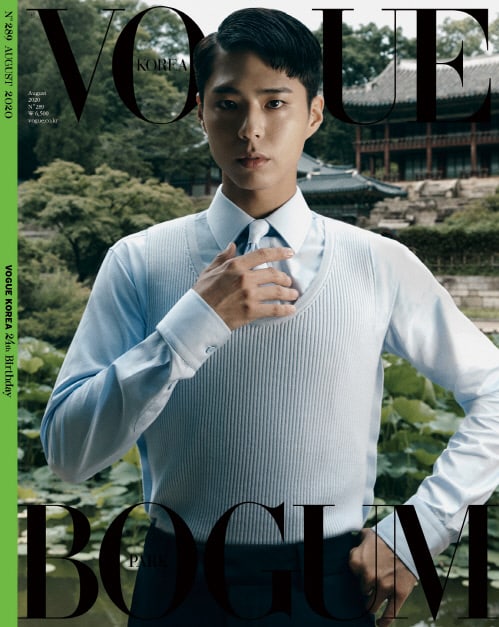 On August 10, Park Bo Gum will celebrate his debut anniversary by releasing the single “All My Love.”

“I worked on it with Sam Kim,” he said. “He’s an artist that I like, so I sent him an offer first, and I was so grateful that he accepted it so willingly. This year is my ninth year since debut. I worked on it while having fun because I wanted to give my fans a gift before my enlistment.”

“I want to be a different person in each of my projects,” shared Park Bo Gum. “I’m paying attention to the way I walk and even every small action as I approach each one differently. As I finish my 20s, I filmed three projects, and I’m curious about what my acting will be like in my 30s.” 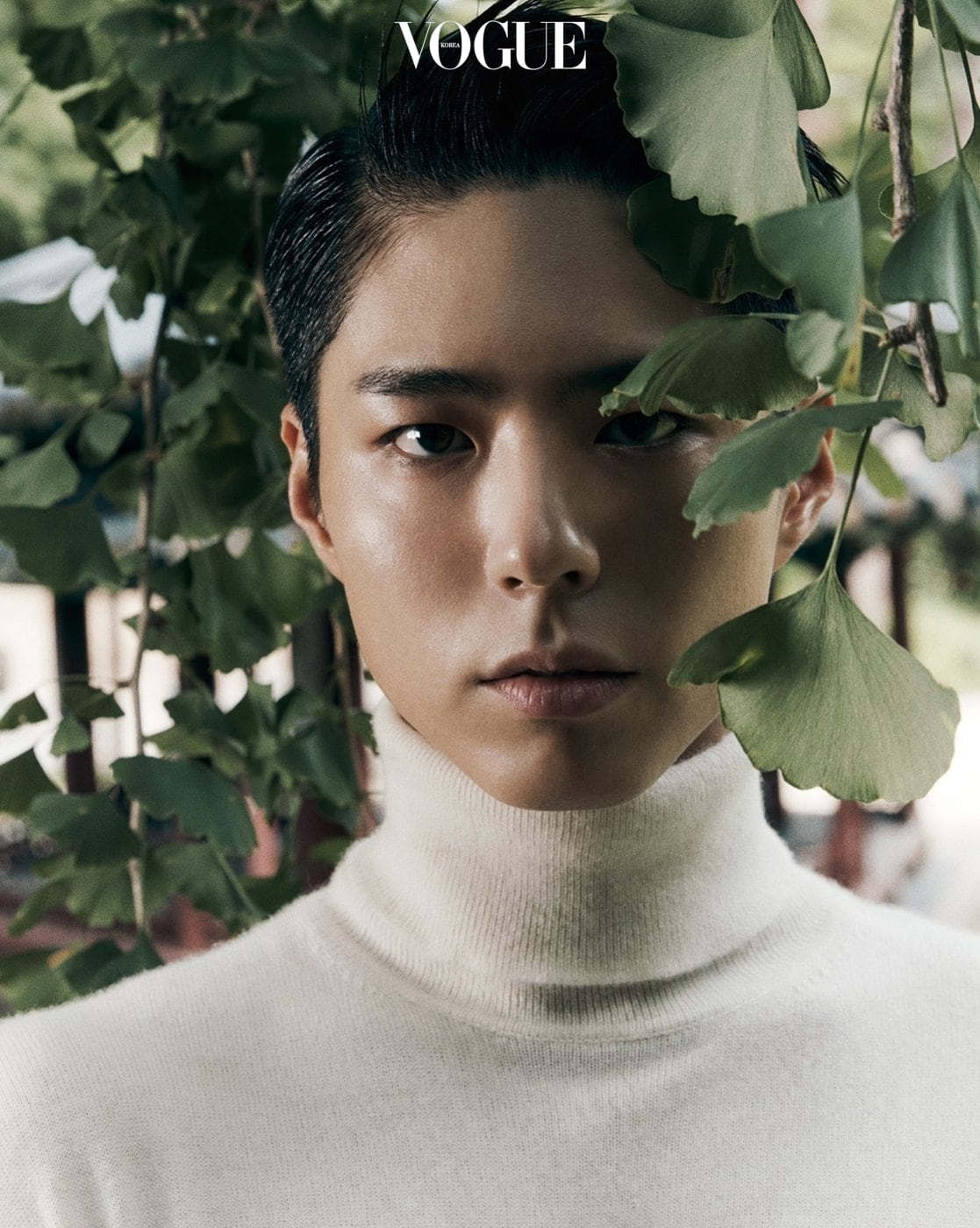 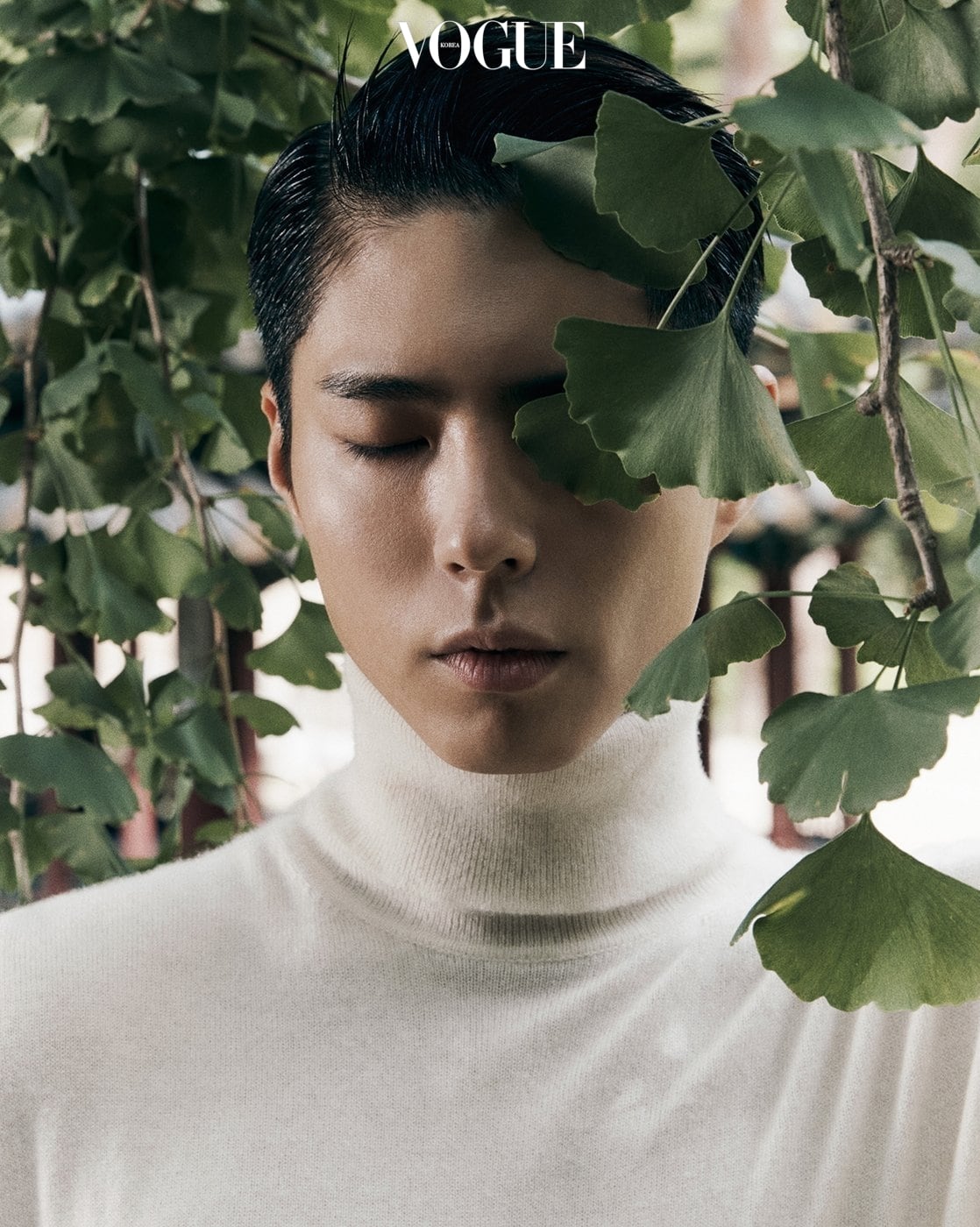 The interviewer also asked if he has any aspirations. He replied, “I do! I would like it if Hollywood noticed me. Why couldn’t it be me, right?” He also added, “I’m also ambitious about world peace. Ever since I was a kid, I’ve always wished for peace for everyone in the world.”

Park Bo Gum will enlist on August 31 and serve as a cultural promotion soldier for the navy.

Park Bo Gum
Vogue Korea
How does this article make you feel?