SSAK3 Talks About Topping The Charts, Their Spouses’ Reactions To Their Debut, And More

On July 25, SSAK3 held an online live fan meeting through the YouTube channel for “How Do You Play?“. 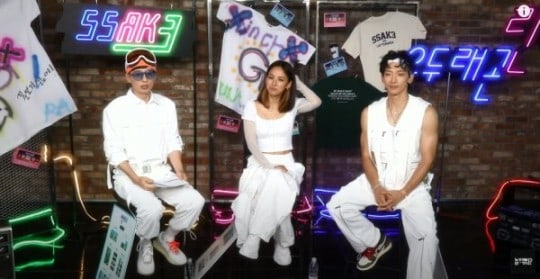 During the fan meeting, Yoo Dragon (Yoo Jae Suk), B-Ryong (Rain), and Linda G (Lee Hyori) talked about rehearsing for their debut performance on “Music Core.” Yoo Jae Suk said, “I wasn’t used to it, so there were a lot of mistakes. I had faith in the others and I did my best.” Lee Hyori said, “It’s been a while since I performed on TV, so it felt awkward, but it was fun.”

About their debut track, “Beach Again,” topping the charts, the SSAK3 members said, “It’s unbelievable, but we were able to accomplish it because of everyone who listened. Thank you for showing us such love.”

Rain said, “[Kim Tae Hee] likes this project lot. After seeing me behave on TV the way that I behave at home, she said, ‘Finally, the side you kept hidden is being revealed to the world.'”

Lee Hyori said, “I think that [Lee Sang Soon] is looking up comments. When he sees a nice comment, he smiles from ear to ear. The song was nominated for first place. He said that he never imagined a song he wrote would get to that position. He’s very grateful.” Lee Sang Soon is the producer of SSAK3’s debut song, “Beach Again,” which Lee Hyori wrote the lyrics for.

Yoo Jae Suk said, “I have no idea if Na Kyung Eun has listened to the song. I think she listens to it in secret. I get embarrassed watching myself on TV with my family, so I can’t watch it with them.”

Asked about the possibility of performing at end-of-the-year awards shows, Yoo Jae Suk said, “We would like to enjoy such ceremonies with lots of people, but unfortunately we can’t do that. I think that it will be difficult for us to go there. It might be causing a nuisance to others.” But Rain said, “We can’t accept an award like that.” Lee Hyori added, “If we’re given an award, there isn’t a reason for us not to accept. We won’t refuse.” Yoo Jae Suk concluded, “We’ll go with the flow.”

SSAK3 recently dropped the music video for “Beach Again.” Check it out here!

Watch the latest episode of “How Do You Play?” on Viki: