Watch: SSAK3 Explains Their Positions In The Group + Previews Collabs With MAMAMOO And Kwanghee For Solo Tracks

On the July 25 “How Do You Play?” broadcast, SSAK3 took viewers behind the scenes of their music video and solo recording sessions!

During the episode, Yoo Jae Suk (Yoo Dragon), Lee Hyori (Linda G), and Rain (B-Ryong) were on set for their “Beach Again” music video. Although “Section TV” ended earlier this year, reporter Park Seul Gi met up with the trio for an interview and a temporary revival of the show.

SSAK3 hilariously showed off their mismatched teamwork with a chaotic group introduction, and Yoo Jae Suk explained, “We’re all greedy and have busy schedules, so we’re a group that doesn’t try to purposely hide that greed and desire.” Lee Hyori added, “We’re going to take over this summer and then leave.”

When asked what position they each hold in the group, Rain jokingly answered, “I’m in charge of people being sick of seeing me,” referring to a comment Lee Hyori had made to him early on in their group preparations.

Park Seul Gi helped her out by jokingly calling him a “deud bo,” a Korean abbreviation for something you’ve never heard of or seen. Yoo Jae Suk made everyone laugh by commenting, “Alright I’ll do that. I like it.” 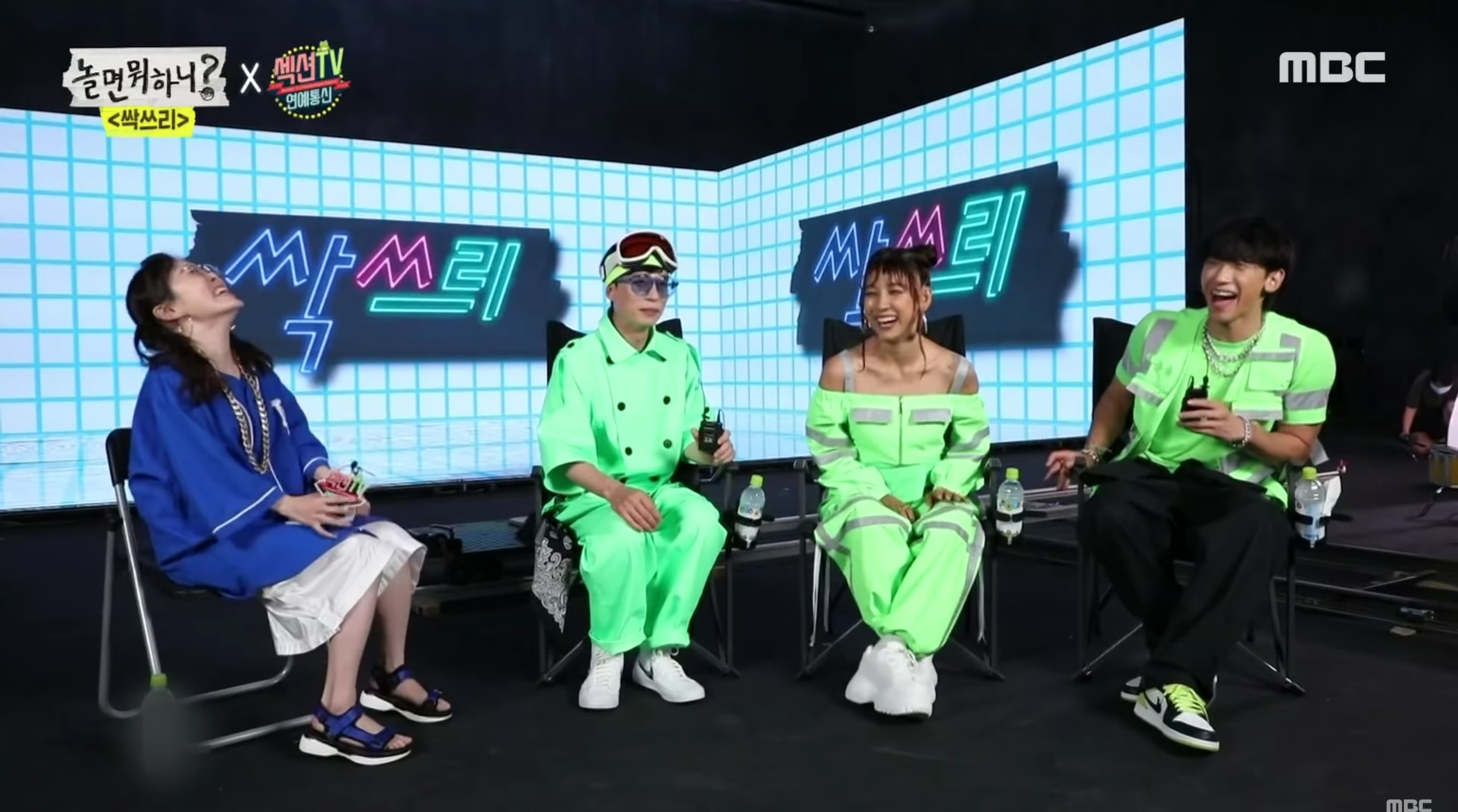 SSAK3 were asked if they had good group chemistry, to which Rain responded, “Our chemistry is not good.” After receiving cold stares from his members, he hilariously revised his answer to “Our chemistry is good.” Yoo Jae Suk explained, “Although it’s our first interview, we might have frequent arguments.” Lee Hyori jokingly chimed in, “You might even have to come back [for another interview] because of a team feud.” 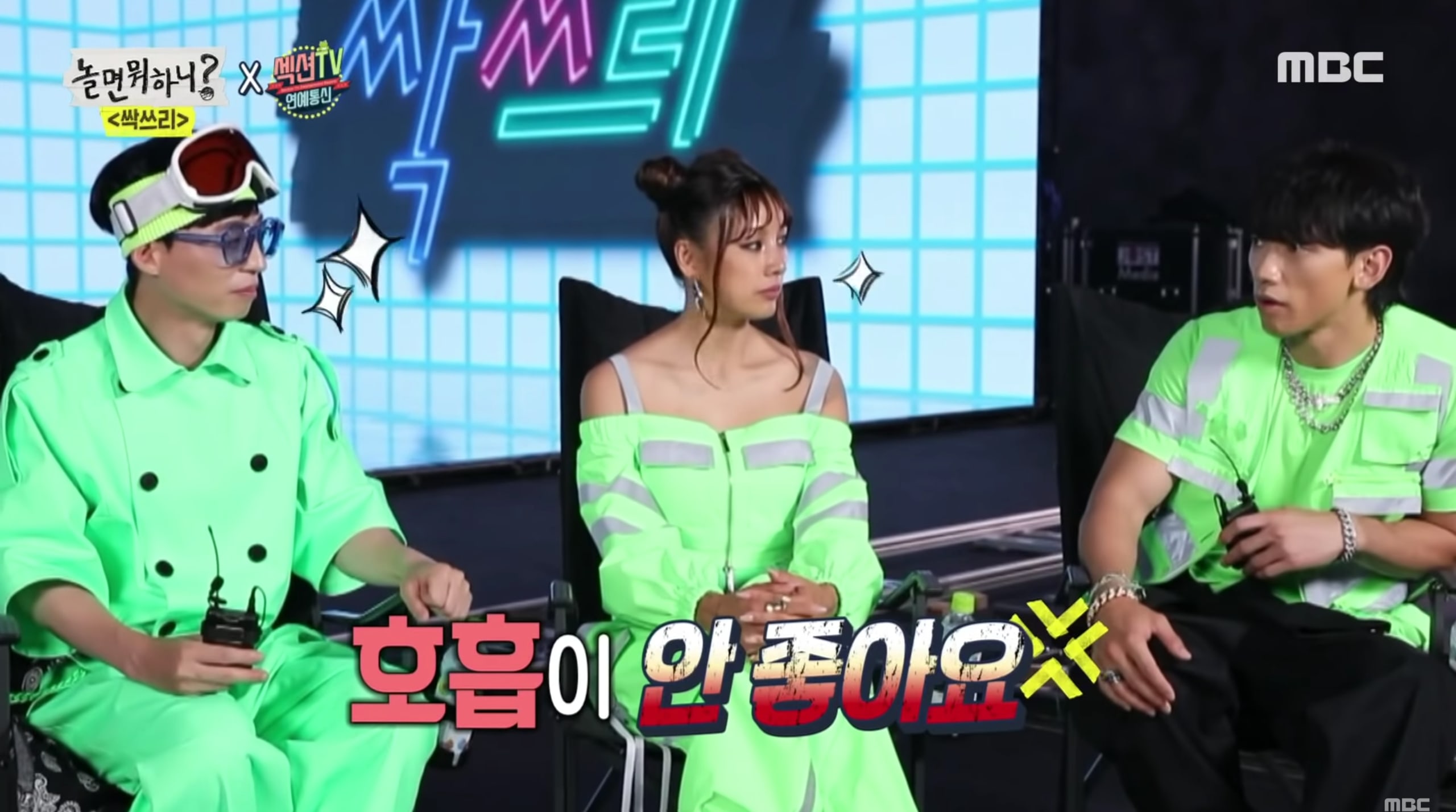 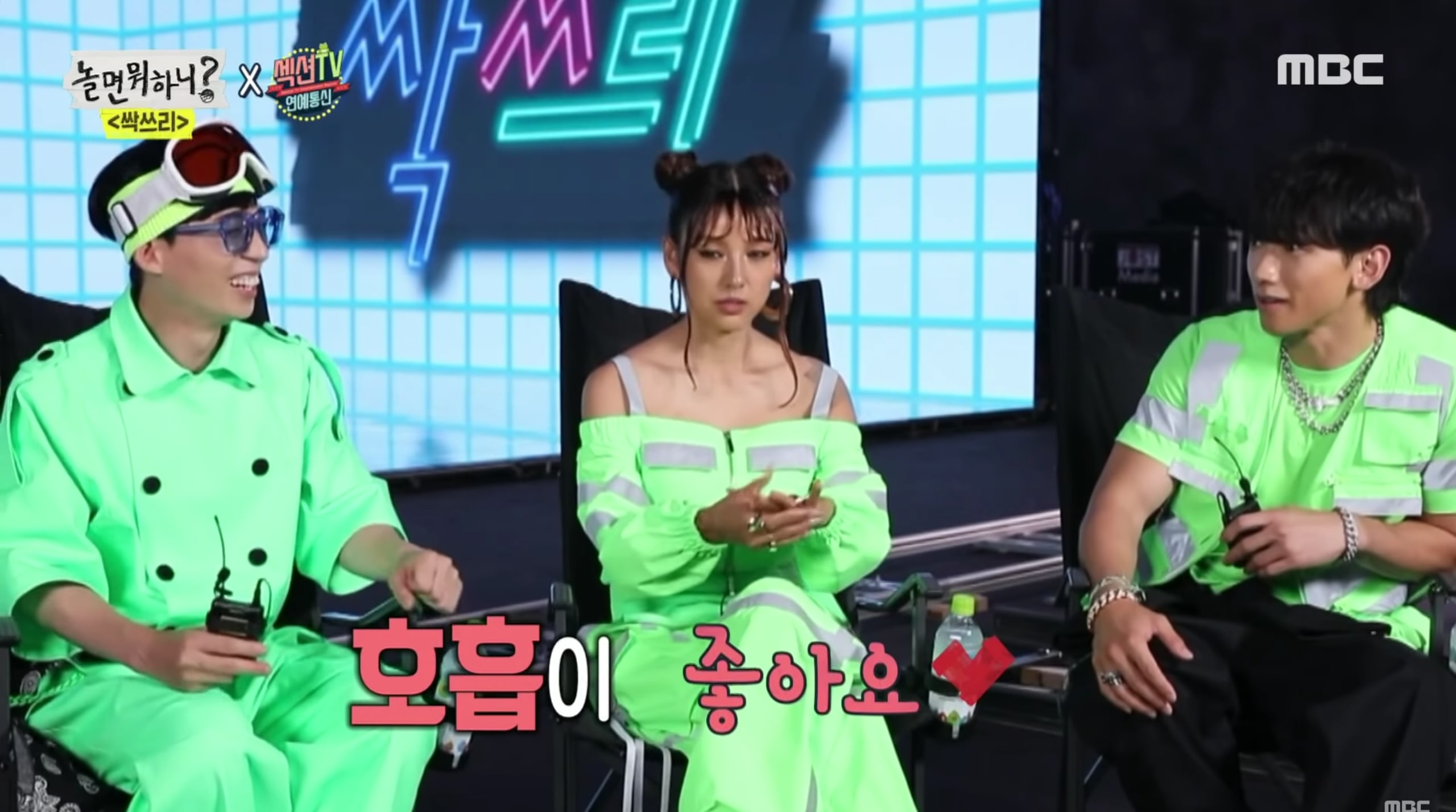 Later, both Rain and Lee Hyori revealed they preferred group promotions over solo ones. They were all touched as Lee Hyori explained, “Our promotions are so fun,” before she hilariously added, “When I’m alone, I have to sing live and dance by myself from beginning to end, and I even get all the hate to myself.”

The two also praised Yoo Jae Suk’s singing and dancing skills as Lee Hyori shared, “Since Yoo Dragon has done a lot of projects with regards to music, he’s very good. He’s better than average at dancing and is good at both singing and rapping. I thought he was doing this to be funny, but he’s much better than I thought.”

Rain added, “Whenever I call our dancers, Yoo Dragon is always there practicing.”

Yoo Jae Suk explained, “I’ve unintentionally ended up received training from many different teachers at many different agencies like YG, JYP, and SM. I wonder whether this is the big picture I’ve been drawing for 10 years.” Lee Hyori joked, “What if you debut as a solo dance singer now?” 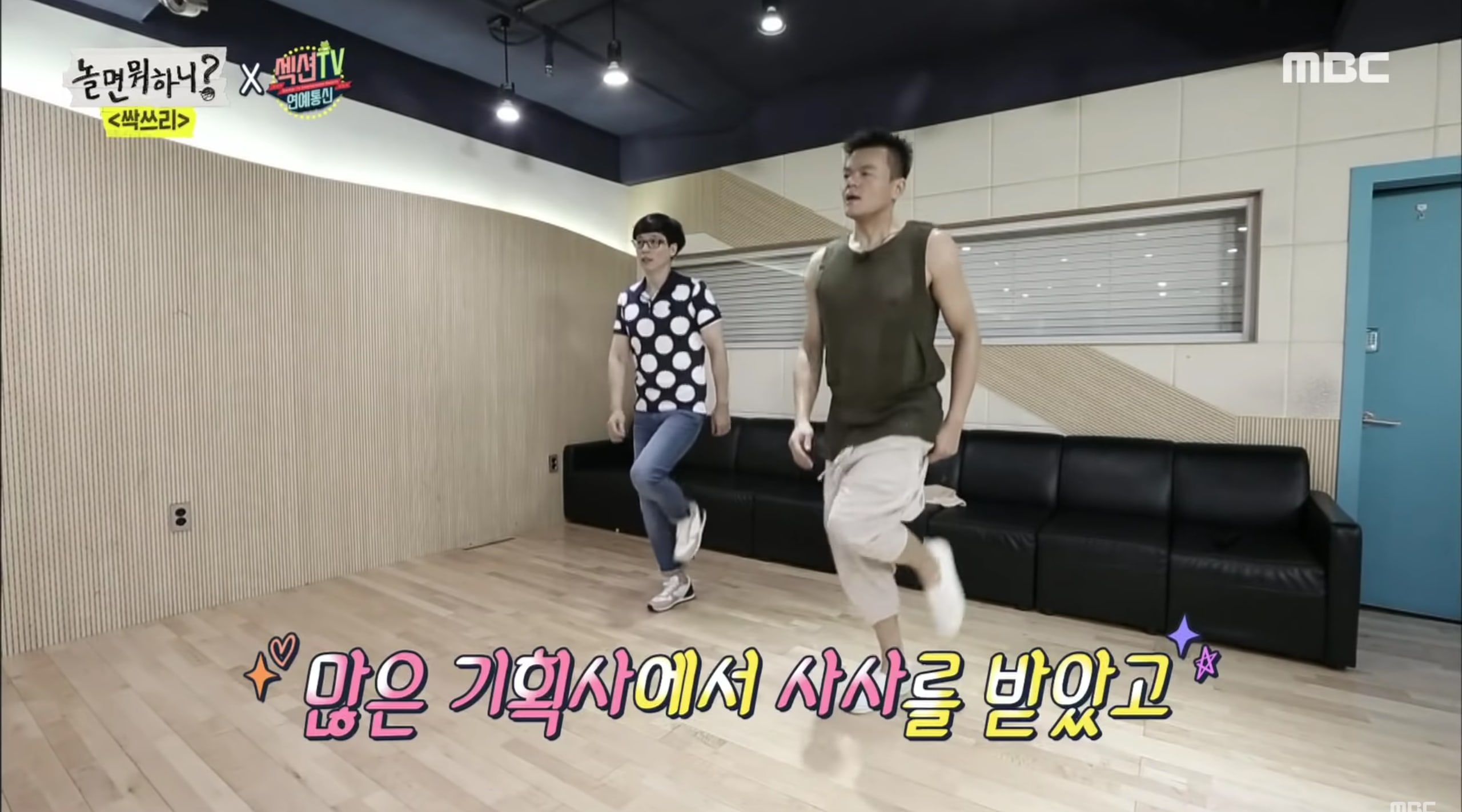 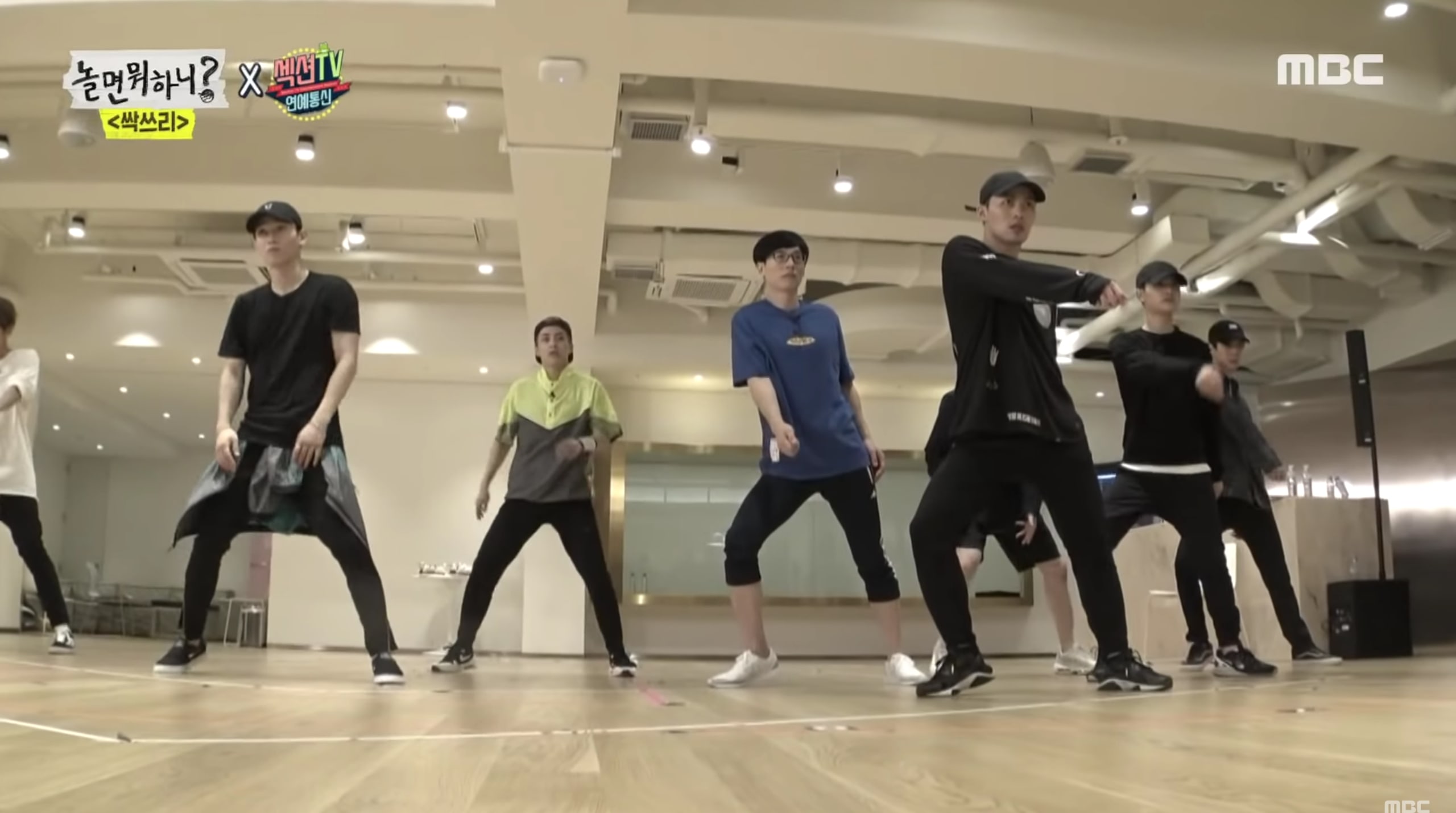 Regarding her husband Lee Sang Soon’s thoughts on her promotions in Seoul, Lee Hyori shared, “He worries a lot. He always says that I’m like a little kid let loose by the water and that I’ll get into trouble without him.”

Yoo Jae Suk hilariously commented, “When you debut as a group, aren’t you supposed to keep dating a secret?” Lee Hyori joined in on his joke and added, “In order to maintain our popularity, we have to keep our marriages a secret, so can you make sure this doesn’t air?” Rain jumped in to tell Park Seul Gi, “I have two daughters, but I’ll give you the exclusive scoop in the future.”

Lastly, the group revealed their unique but unanimously-picked first place promise, which is to hit each another just once. When asked about her dream girl group as a first place promise, Lee Hyori shared, “Regardless of whether we place first or not, I’m down whenever as long as they all are.”

Later in the episode, each member of SSAK3 was shown recording their solo songs. Yoo Jae Suk recorded a duet with Kwanghee, who previously joined SSAK3 for their remake of “In Summer.”

Working with Code Kunst, Lee Hyori showed off her incredibly charismatic husky voice with a preview of her groovy solo track “Linda.”

To amp up the energy of his exciting solo song, Rain was joined by MAMAMOO. He thanked the group for agreeing to feature on the track and announced that he had already divided up their parts. After he cautiously asked them to look it over and make sure it was okay, MAMAMOO’s Solar made everyone laugh by immediately commenting, “It’s great.”

SSAK3 met up once more for the outdoor portion of their music video. Ahead of their filming, Rain commented on how cool it was that SSAK3 was officially registered as a group on portal sites. Lee Hyori added that on her profile, she originally only had Fin.K.L. listed as her group, but SSAK3 was now on it too. 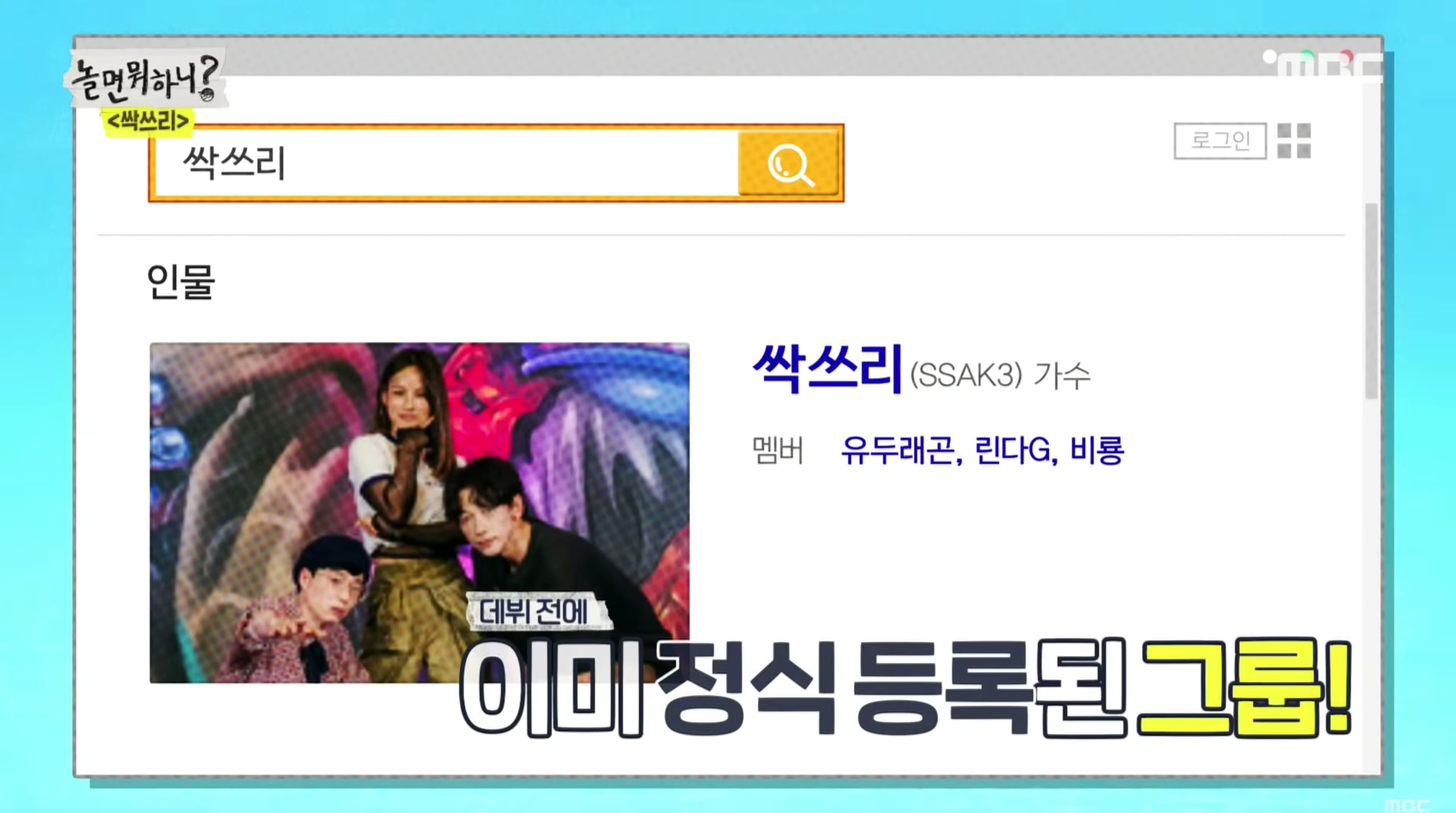 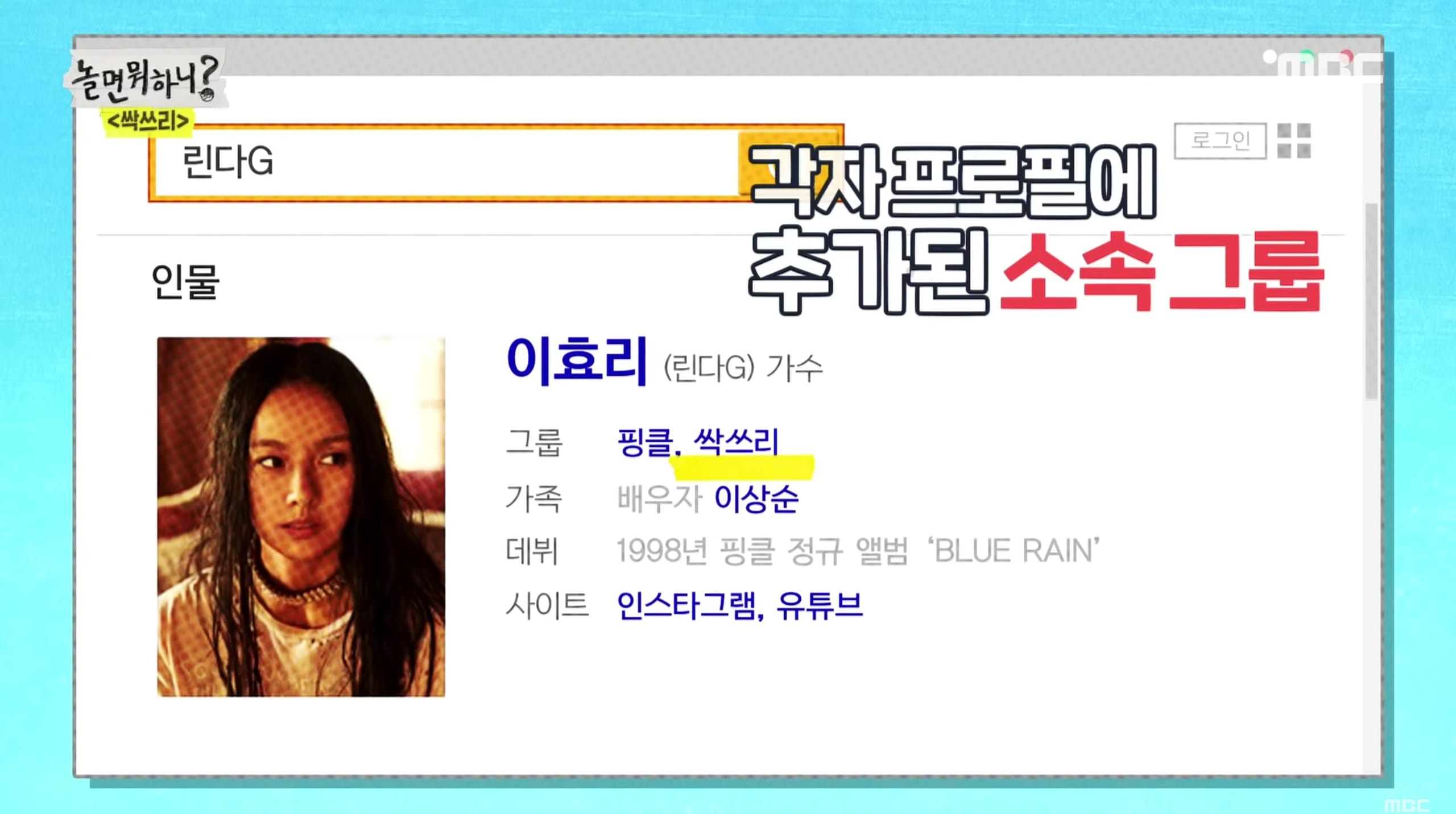 They continued to show off their hilarious competitiveness as Lee Hyori questioned what Rain was doing the week prior. He explained he had filmed a commercial, and Lee Hyori asked, “Commercial? For the refrigerator?” She clarified how she knew this, saying, “I was walking down the street when I saw his staff member. I asked, ‘Is Ji Hoon (Rain’s birth name) here?’ So I went inside. I thought, ‘I caught him!’ He was wearing a revealing shirt and posing in front of a fridge.” 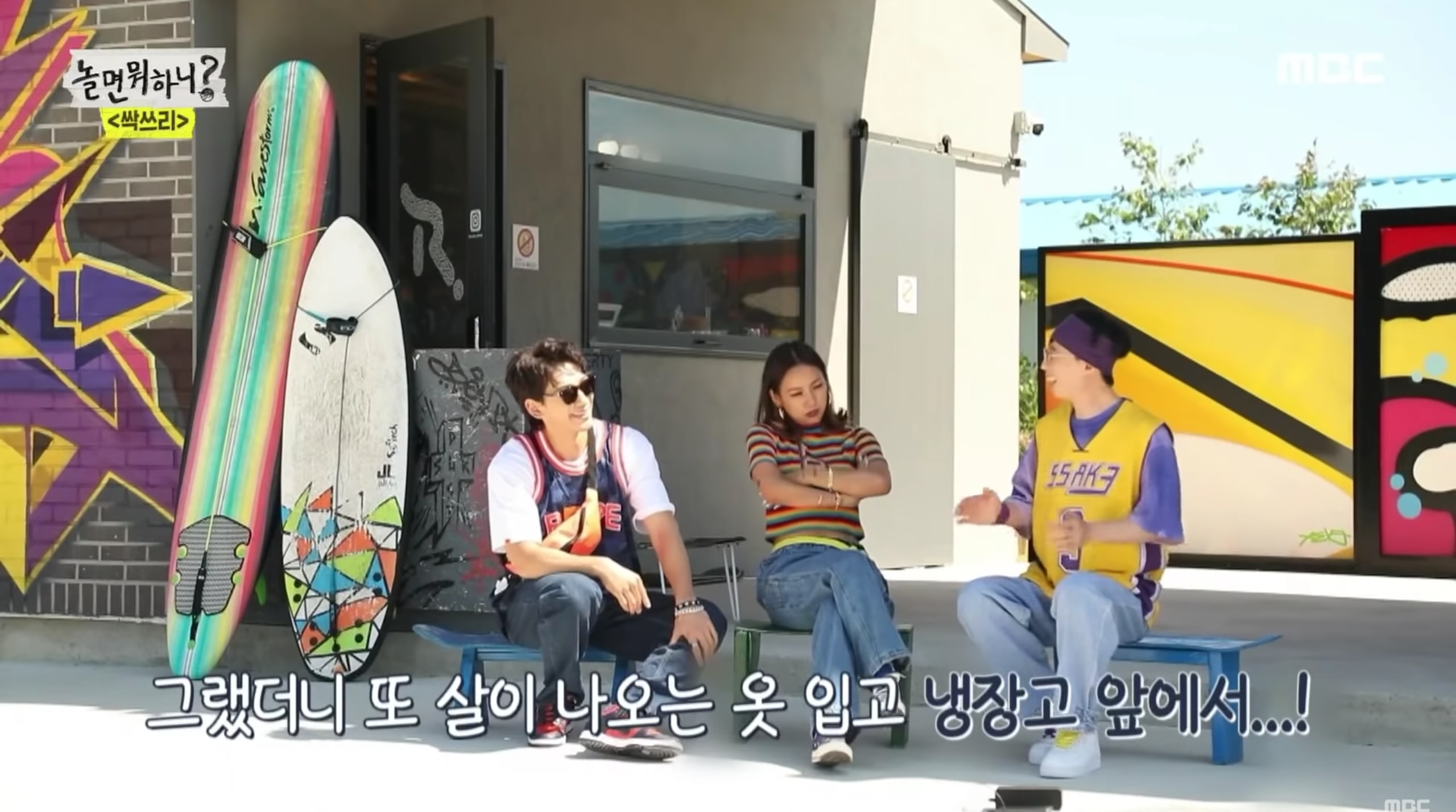 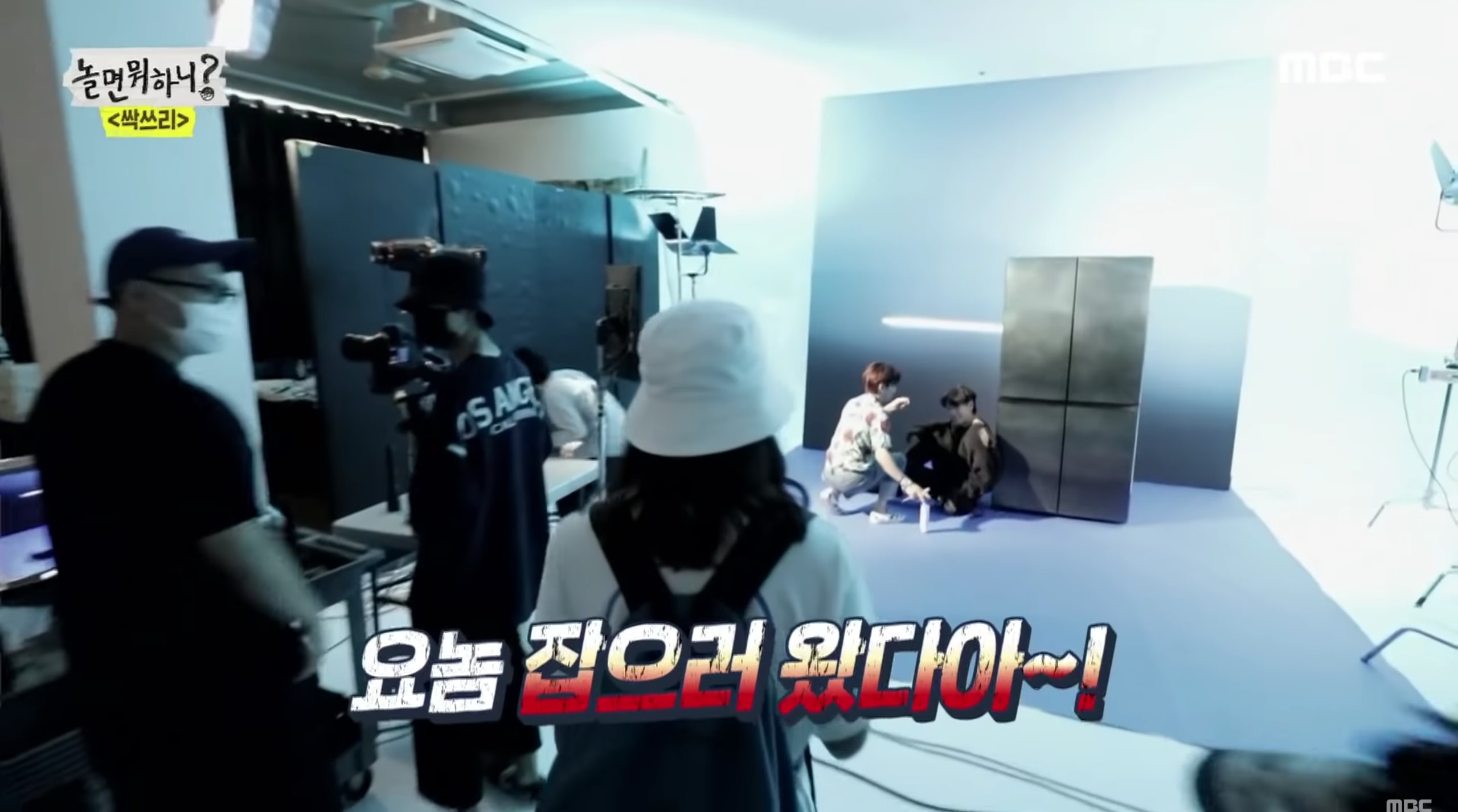 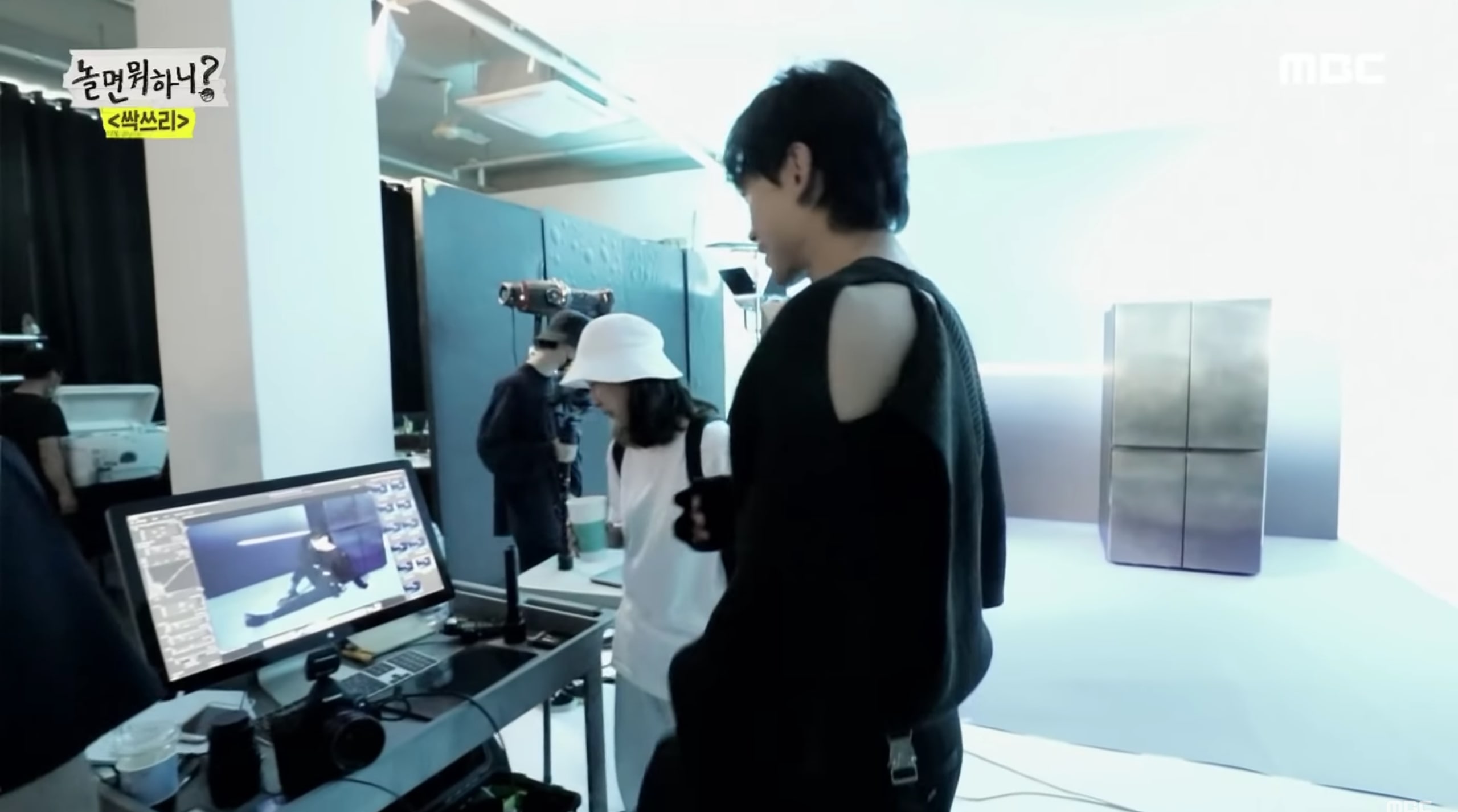 After energetically filming various scenes for their 90’s-themed music video, the trio sat down to monitor the clips. They commented on how sad and nostalgic it was, expressing their regret that the group’s end was not long after their debut.

The end of the episode featured the refreshing and nostalgic music video for “Beach Again,” which can you check out here!

MAMAMOO
Yoo Jae Suk
Kwanghee
Lee Hyori
Rain
How Do You Play?
SSAK3
How does this article make you feel?