The program includes cast members Sung Dong Il, Kim Hee Won, and Yeo Jin Goo traveling around Korea in a portable home and bringing along people who are special to them, such as friends or family. IU appeared as a guest on the July 23 episode, after working with Yeo Jin Goo on “Hotel Del Luna” and with Sung Dong Il on “Scarlet Heart: Goryeo.”

In a recent interview with Maeil Business Newspaper’s Star Today, PD Kang Koong shared, “Yeo Jin Goo personally contacted IU, and that’s how she ended up on the show.”

“We did a pre-interview with IU after she agreed to come on the program,” he continued. “She said that Yeo Jin Goo isn’t the type of person who finds it easy to ask people for favors, but he contacted her and got up the nerve to ask her, ‘Could you come hang out at our house?’ and so she replied, ‘Of course I will.’ She said that she’s grateful to him and she had a lot to repay him for after they acted together. She also said she could spend an hour just praising him and that she was thankful that he’d asked her for the favor. It made me realize once again that Yeo Jin Goo is a great person.”

The filming was IU and Yeo Jin Goo’s reunion a year after “Hotel Del Luna,” and the director said, “They must have been so happy to see each other. Since the adults were there too, they couldn’t express how happy they were in words and instead they said it with looks. Yeo Jin Goo was busily running around because his guest had come, while the older guys were taking care of them because Jin Goo’s friend was there. IU kept watching how Yeo Jin Goo was taking care of her.”

“It was great to see how they each took care of each other,” he said. “It was clear that they have a great relationship where they truly like each other and are grateful for each other. It was our task to convey that through the show without saying it in words, and we worked hard to present them in a beautiful way.” 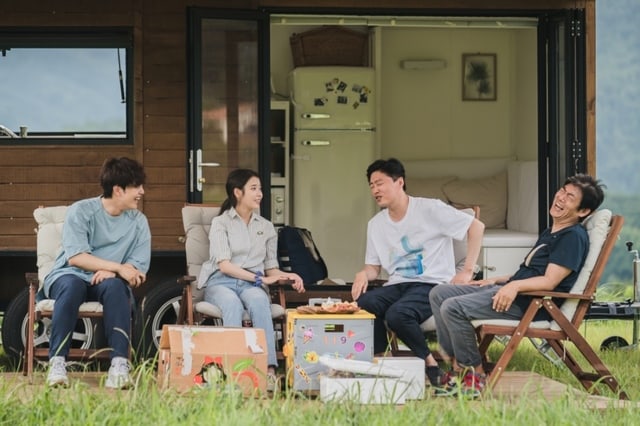 When IU arrived, she brought two suitcases with her, including gifts such as her mother’s homegrown vegetables and homemade side dishes, as well as coffee her father had roasted. PD Kang Koong shared how grateful and touched he’d been by her parents’ presents. “Her parents’ gifts reminded me of why IU is the way she is,” he said.

The preview for the next episode showed that Block B’s P.O will be joining his “Hotel Del Luna” co-stars on their trip.

Kang Koong said, “Yeo Jin Goo wanted to introduce him as a surprise gift to the older guys, so he secretly invited him. They’ve kept in contact, and since IU was coming, he invited him so they could meet for the first time in a while and make memories together. It will be heartwarming to watch.”

“House on Wheels” airs every Thursday at 9 p.m. KST on tvN.

IU
Yeo Jin Goo
House on Wheels
How does this article make you feel?