Somi shared how grateful she is to BLACKPINK’s Lisa and Jisoo for being pillars of support while she filmed her latest MV!

On the July 29 episode of “Idol Radio,” Somi appeared as a guest after recently making a comeback with her track “What You Waiting For.”

During the show, she shared that Lisa and Jisoo had visited her on the set of her music video. “It gave me a lot of strength,” she said. “I often feel bored and lonely because I’m filming on my own, but they came and became someone I could talk to, and we played around together.”

When asked to name the person she’s the most grateful for lately, Somi chose Jisoo and Lisa. “Since I’m on my own, I don’t have a fellow member who will take photos of me, but when they came they took photos for me,” she explained. “I was so grateful.” 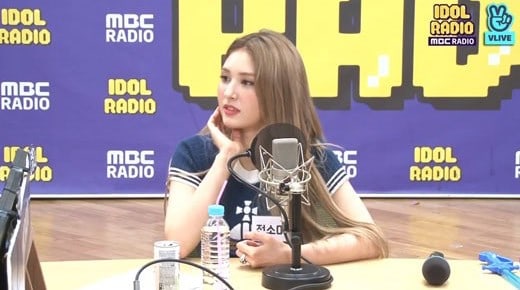 Somi also talked about how she recently signed with Universal Music Group’s label Interscope Records to make her entry into the U.S. market. She said, “They saw my ‘Birthday‘ promotions and contacted me first,” she said. “So I right away said yes. I’m so thankful about it.”

She went on talk about what it was like to take part in writing her new song. “I poured everything into the lyrics so I’m recovering now,” she said. “It could be said that before I was living an idol life where I received a song, practiced it, and performed it, and now it feels like a different kind of work to be writing lyrics and composing as a soloist. So this song has felt very unique.”

Somi also talked about why she’d cried on the day of her comeback. “The song was finished in February and I’ve made my comeback just now, so it’s taken a long time for it to come out,” she said. “It’s a song that I really love and I spent a lot of time revising it, so when it was released, I felt empty.”

She also delighted fans by sharing that she plans to release the song “Watermelon” that she revealed through her reality show “I AM SOMI” as a b-side on her next album.

That day, a making-of video was released for “What You Waiting For” which briefly shows their visit to the set!