The “Hotel Del Luna” reunion got even bigger on this week’s episode of “House on Wheels”!

The tvN show “House on Wheels” includes cast members Sung Dong Il, Kim Hee Won, and Yeo Jin Goo traveling around Korea in a portable home and bringing along people who are special to them, such as friends or family. On the previous episode, IU joined the cast for a paragliding adventure and more after being personally invited by her “Hotel Del Luna” co-star Yeo Jin Goo.

Their fun trip continued in the July 30 episode. IU told Kim Hee Won, “Jin Goo isn’t usually the type of person who asks for favors, but he asked me, ‘Could you come along?’ I was grateful that he asked me for the favor.”

When Yeo Jin Goo came over, Kim Hee Won said to him, “You’re more quiet than you were when the other guests came.” IU responded, “I think he’s being very attentive.” Yeo Jin Goo explained that he’s now realized how it feels to have a guest over.

Kim Hee Won went away, leaving the two alone. When Yeo Jin Goo didn’t speak up, IU said to him, “If we keep being quiet like this, people are going to think we’re awkward with each other, even though we really aren’t.” Yeo Jin Goo replied, “We’re not saying anything because we’re not awkward together.” IU agreed that was true. 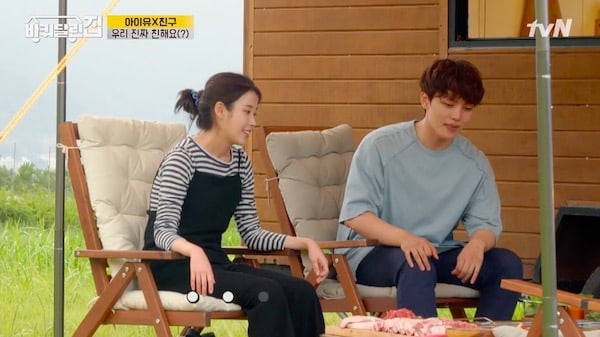 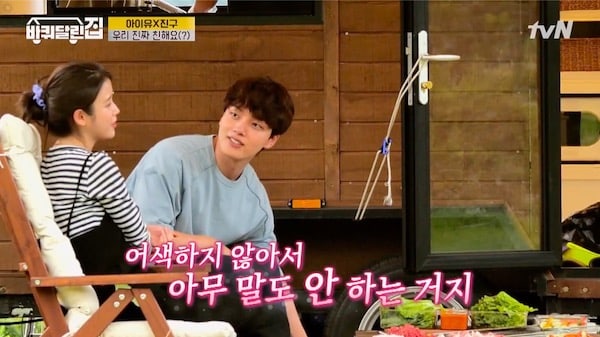 Yeo Jin Goo expressed his thanks to IU for coming on the show at his request, and IU said, “Next time, you have to do me a favor. Since I came here to Mungyeong, how far would you go?” Yeo Jin Goo joked, “If you called for me, I’d even go overseas.”

Yeo Jin Goo soon after clasped his hands together in a polite gesture, leading IU to say, “No, don’t put your hands together! Just act like you normally do.” 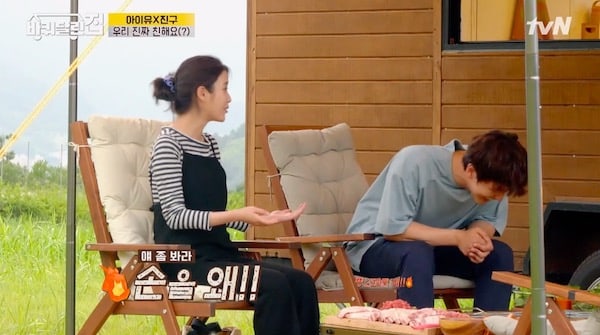 IU made a sauce out of salt and sesame oil for their meal. When she was grinding the salt, Yeo Jin Goo said, “Doesn’t that hurt your arm?” Sung Dong Il said, “You’re talking a lot since Ji Eun [IU’s real name] is here. You seem close.” The pair then smiled and said their close friendship had finally been recognized. 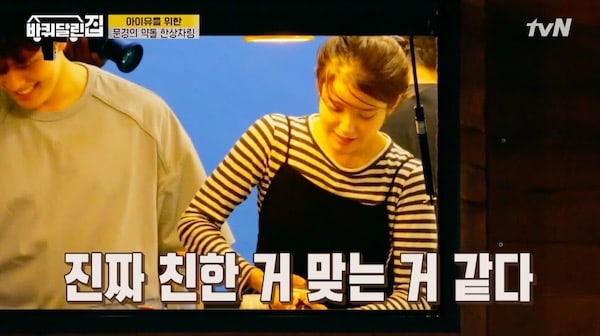 While they were eating, they suddenly got hit with a rain shower and struggled to keep the fire going, so their grilled meat wasn’t as delicious as they’d expected. Yeo Jin Goo was apologetic toward IU and promised her, “I’ll make you something delicious later.”

IU replied, “It’s so delicious. How much more delicious does it need to be? I’m fine but the three of you seem to think that today wasn’t good for some reason.” 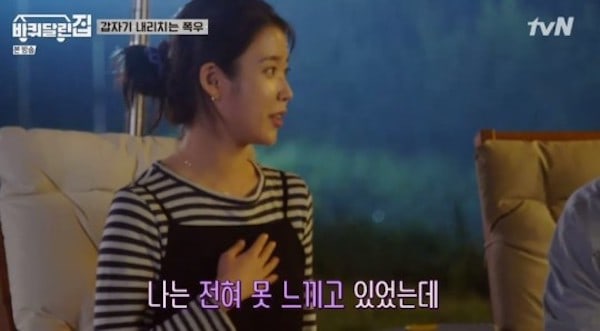 Later on, IU stepped up to wash the dishes that had piled up, so Yeo Jin Goo helped her. Sung Dong Il smiled as he watched them.

Sung Dong Il asked IU, “This is a bit of an absurd question, but later on, you’ll meet someone you love and get married, won’t you? Who would you say is the closest to your ideal type, out of the three of us?”

Without even hesitating for a second, IU replied, “Jin Goo. It’s Jin Goo.” Sung Dong Il joked that she should have at least hesitated a bit first. 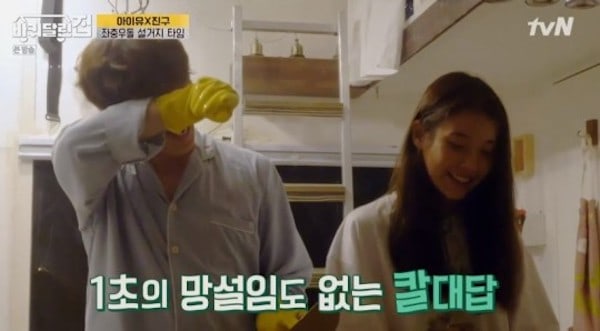 The next morning, Kim Hee Won and Sung Dong Il tried not to wake up Yeo Jin Goo and IU, and they quietly went off on a walk. While they were gone, IU got up and did some stretching. When they returned, the three of them warmly greeted each other, and Yeo Jin Goo woke up at the noise of their movements.

After a meal, Kim Hee Won and Sung Dong Il went to buy rice cakes, and IU and Yeo Jin Goo prepared to welcome their new guest. Yeo Jin Goo said to IU, “Since the two of us are greeting our guest, you seem like you’re a regular cast member too,” and IU agreed. The pair worked together to get the house’s tarp up.

Their “Hotel Del Luna” co-star P.O of Block B then arrived to join in the fun! 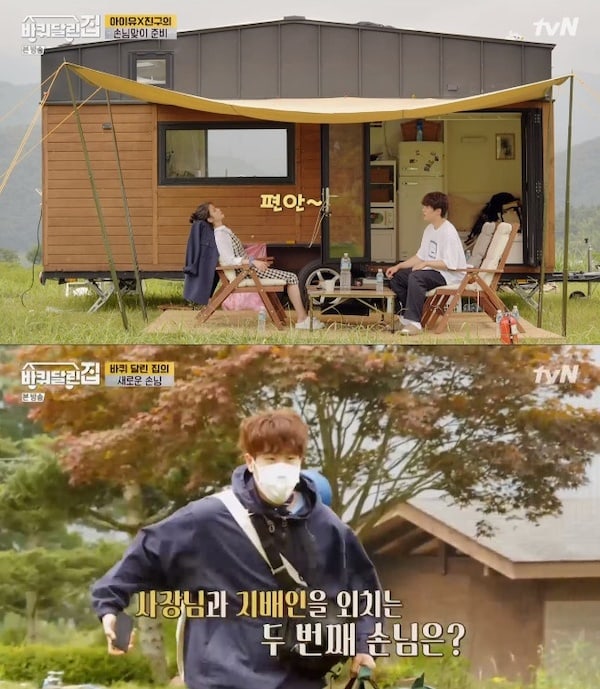 IU and Yeo Jin Goo prepared lunch for him, and he said when he tasted it, “It’s really delicious.”

Once the older guys came back, the group set off together in the portable home toward a stream in a valley. Both Kim Hee Won and Yeo Jin Goo commented that they felt like they’d been there before to film. 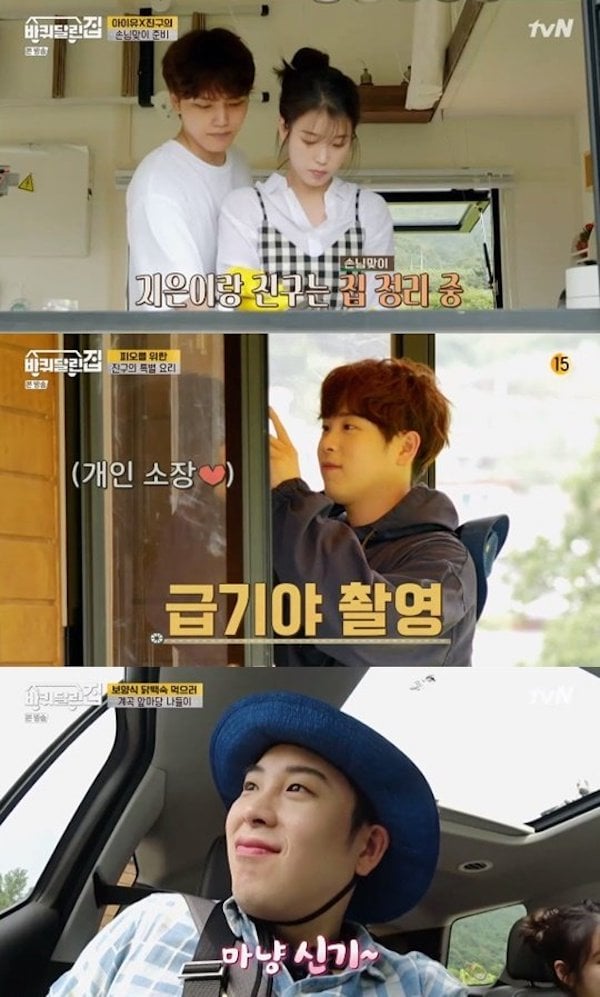 IU, Yeo Jin Goo, and P.O had fun in the water while Sung Dong Il and Kim Hee Won prepared chicken soup for everyone. Sung Dong Il commented, “I feel like my son’s friends have come over to play.” 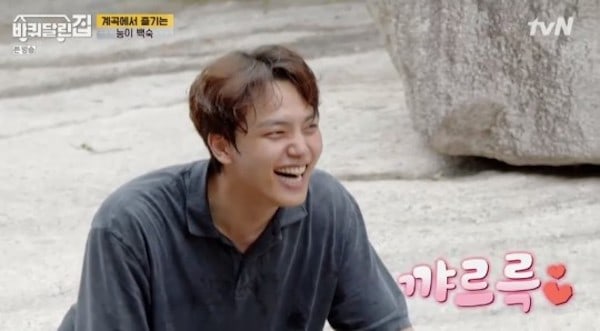 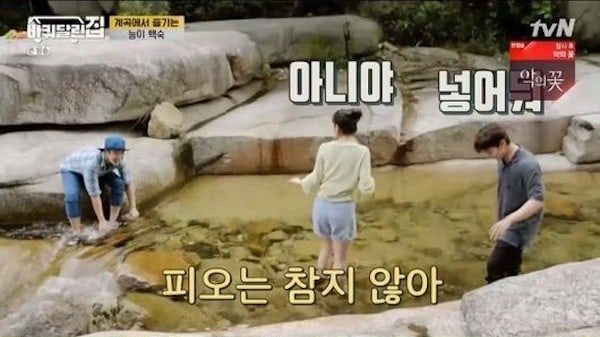 Once the soup was done, the five of them gathered together to eat it, and the three cast members looked pleased to see how much IU was enjoying it.

She said, “Now that I’ve eaten this, I understand why you were upset yesterday.” 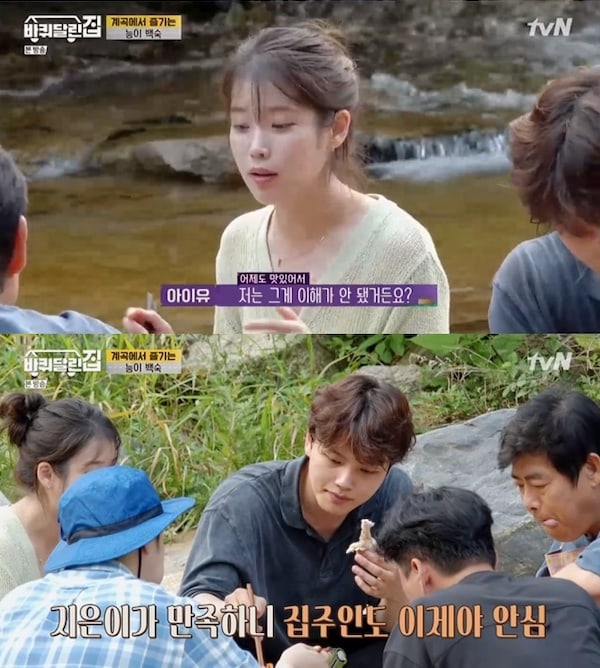