The highly anticipated crime thriller “Flower of Evil” has finally premiered and, wow, did it deliver on its promise of intrigue and suspense! This drama has all the great makings of a crime drama mixed with the theatrical angst of melodramas. Even better, it stars both Lee Joon Gi and Moon Chae Won who won fans over with their chemistry back in 2017 with the Korean remake of “Criminal Minds.”

“Flower of Evil” follows the relationship between Baek Hee Sung (Lee Joon Gi) and Cha Ji Won (Moon Chae Won) and the ups and downs of their marriage. While their marriage and family seem perfect on the outside, Hee Sung harbors a dark secret. He’s a loving husband and metalsmith by day and suspected of being a deadly killer by night. His alleged crimes begin to catch the attention of his wife Ji Won, who is a perceptive and intelligent detective.

While the premiere episodes did give us some answers about Hee Sung’s motives and crimes, it also opened up thousands of other questions. The drama definitely seems to be promising a great cat and mouse chase between Hee Sung and Ji Won that will lead to justice and heartbreak all at once. Here are some of the things we loved and hated about the premiere episodes.

Let’s be honest, getting a kiss scene in a K-drama between the main leads is a slow, torturous wait nine times out of 10. “Flower of Evil” doesn’t waste time and gives not one, but two kissing scenes between Hee Sung and Ji Won right off the bat. The first is a cinematic underwater kiss where Hee Sung is tied down, while the second is a steamy make-out session in his shop before Ji Won hurries off to work.

If we put aside for a second that Hee Sung is a murderer, these scenes are a treat for viewers. Many fans raved about the pair’s chemistry back in 2017 when they starred together in “Criminal Minds,” and these scenes showcase their chemistry in a different and romantic light. These moments delightfully set up the audience to feel the conflict that will be explored when Ji Won discovers the truth about Hee Sung. Their marriage seems cute, playful, and picturesque and corrals fans to root for their success as a couple. The writers are teasing viewers to make them wish and hope that Hee Sung’s past isn’t true, and it makes for some very compelling television.

Some of the most entertaining parts of the premiere episodes are the scenes between Ji Won and her two fellow detectives Choi Jae Sub (Choi Young Joon) and Im Ho Joon (Kim Soo Oh). It’s clear from the beginning that Jae Sub has a very different approach to solving cases that relies on his gut feelings, unlike Ji Won who likes to face the evidence head-on. Ho Joon is a mix between the two and tends to get caught between friendly quarrels on who he prefers more.

Their dynamic is clearly shown in the first case when a father is accused of pushing his son down the stairs. While Jae Sub is quick to believe he did it and illegally obtains evidence of the man’s affair, Ji Won brushes it off and focuses on the other facts and details. She eventually notices that the vitamins the victim’s mother takes are drugs and makes the connection to the affair and the crime at hand. 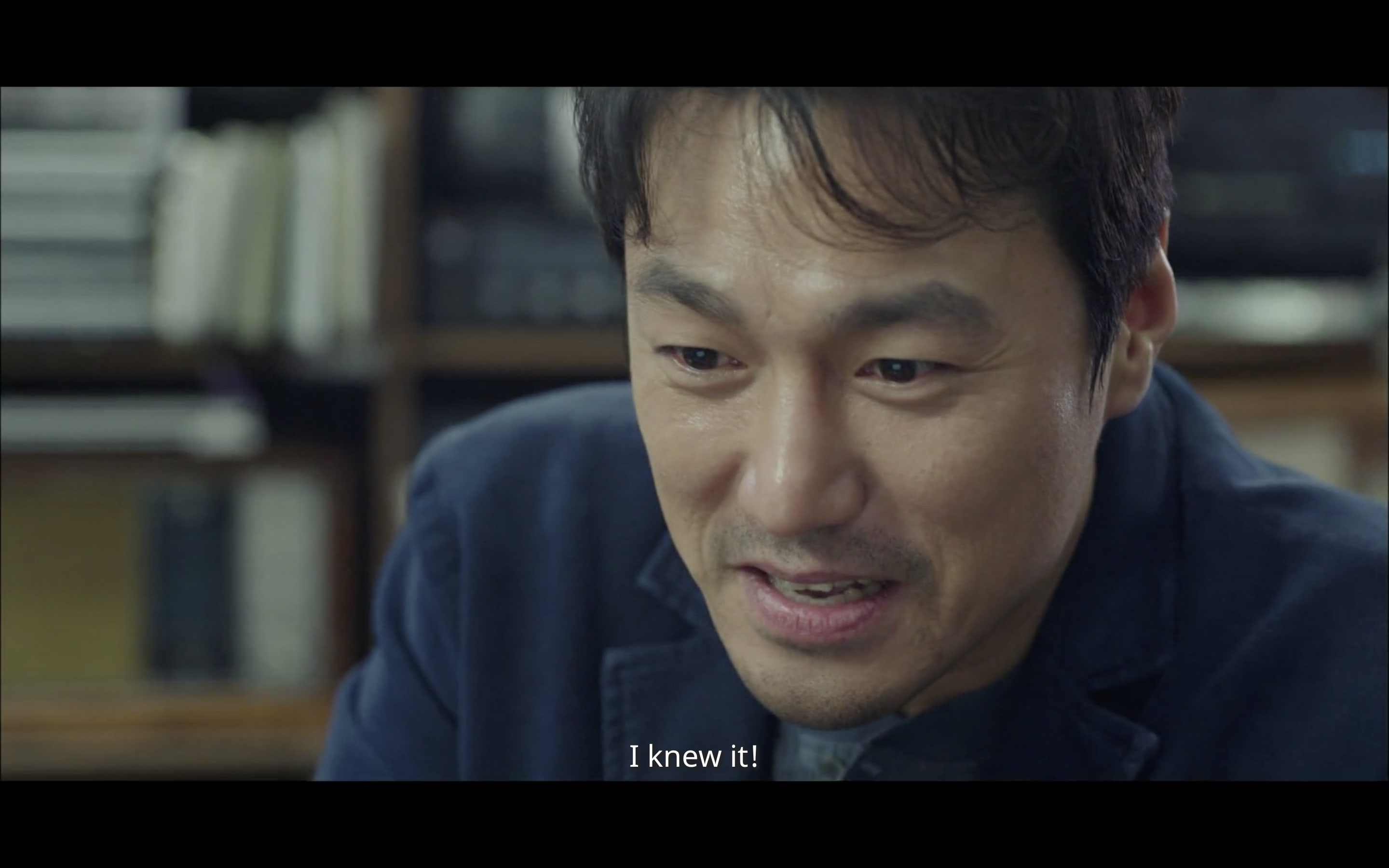 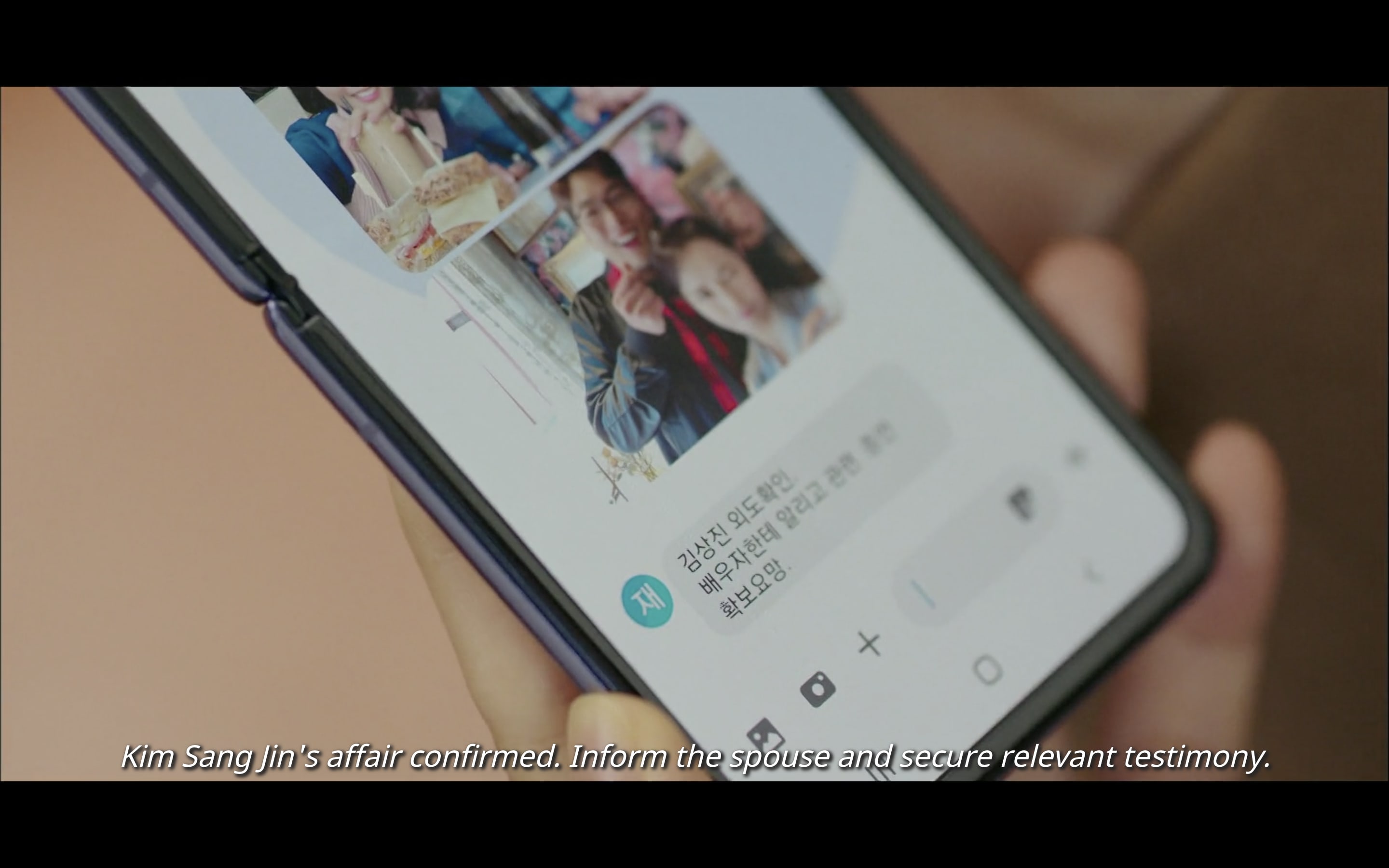 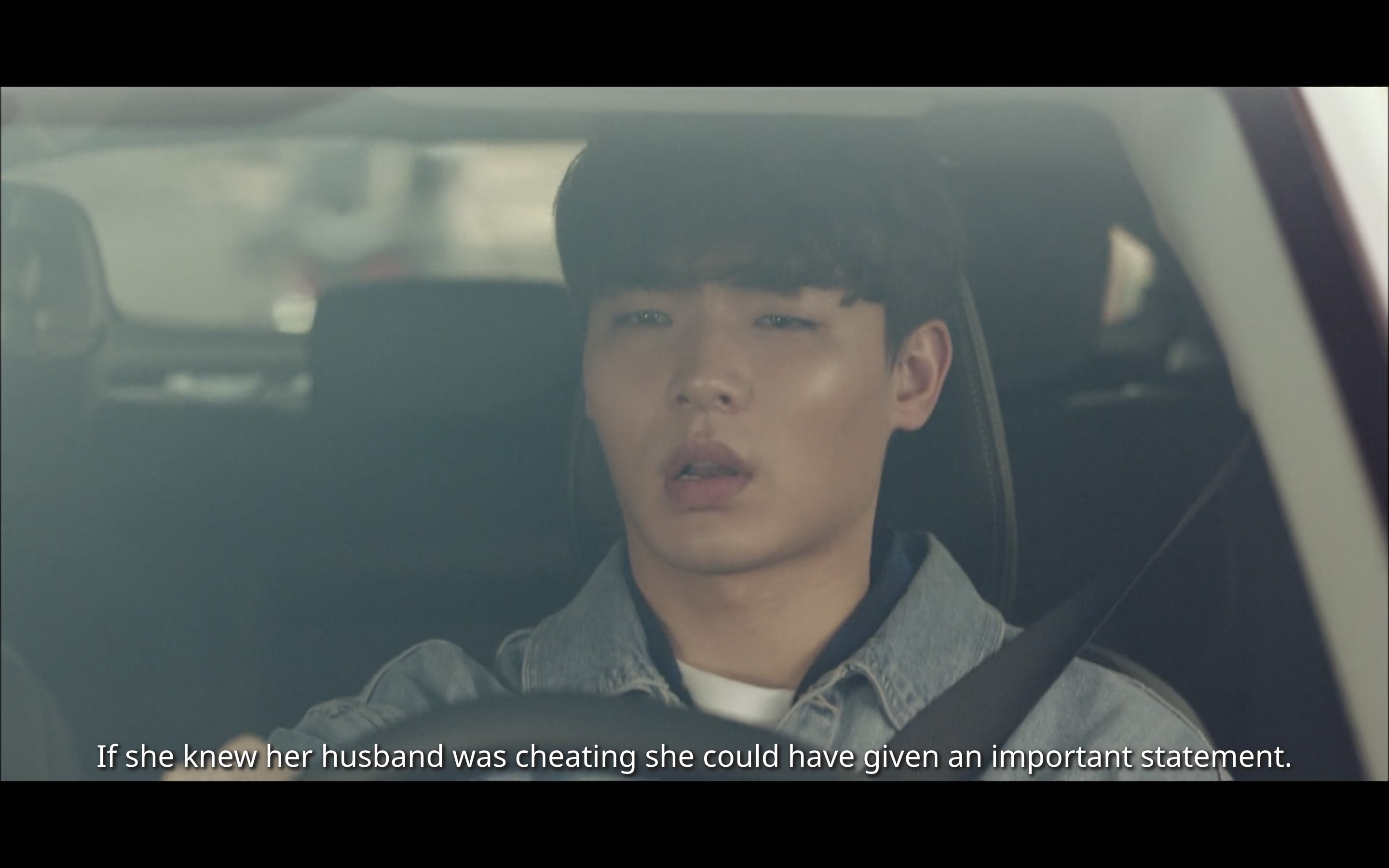 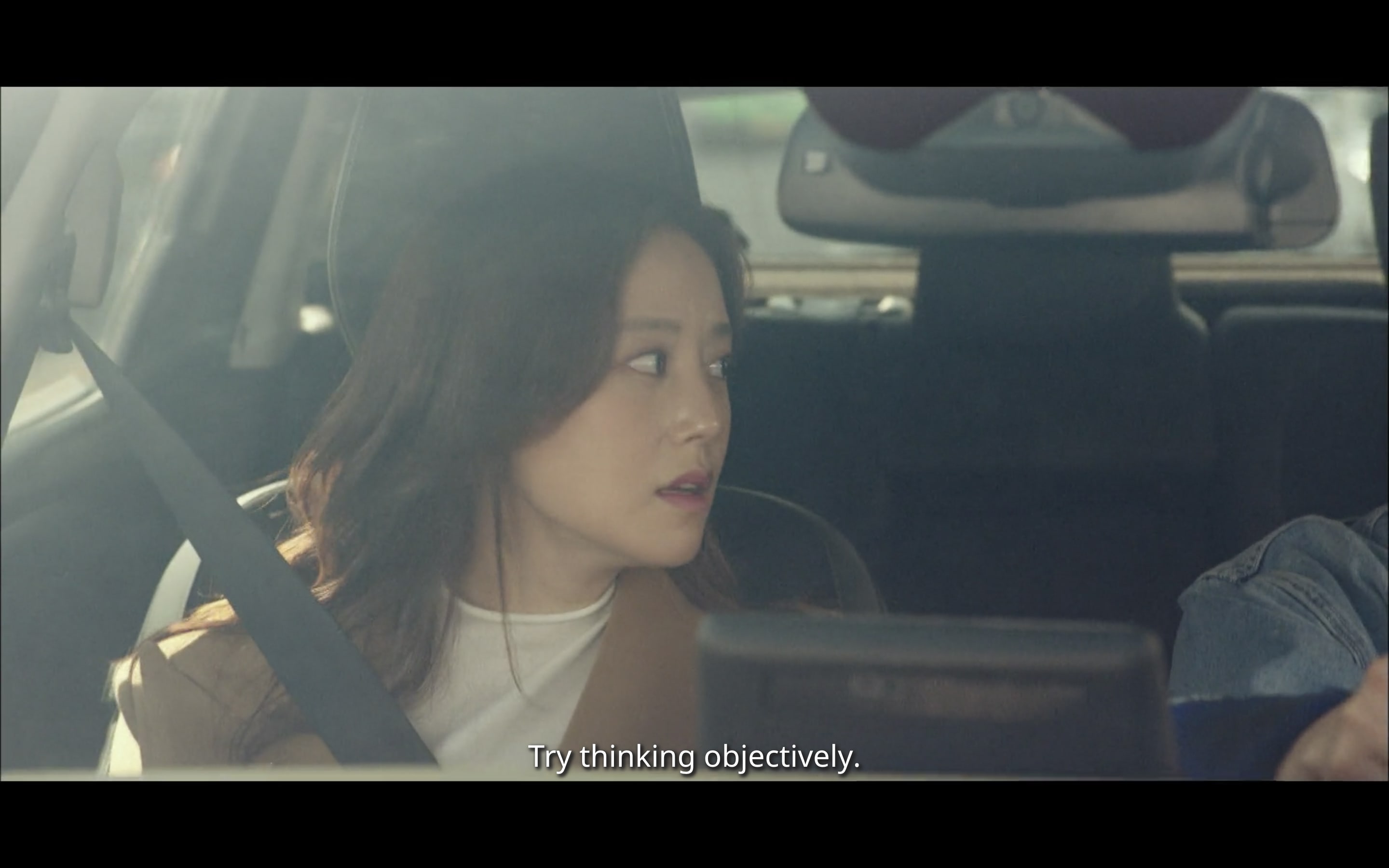 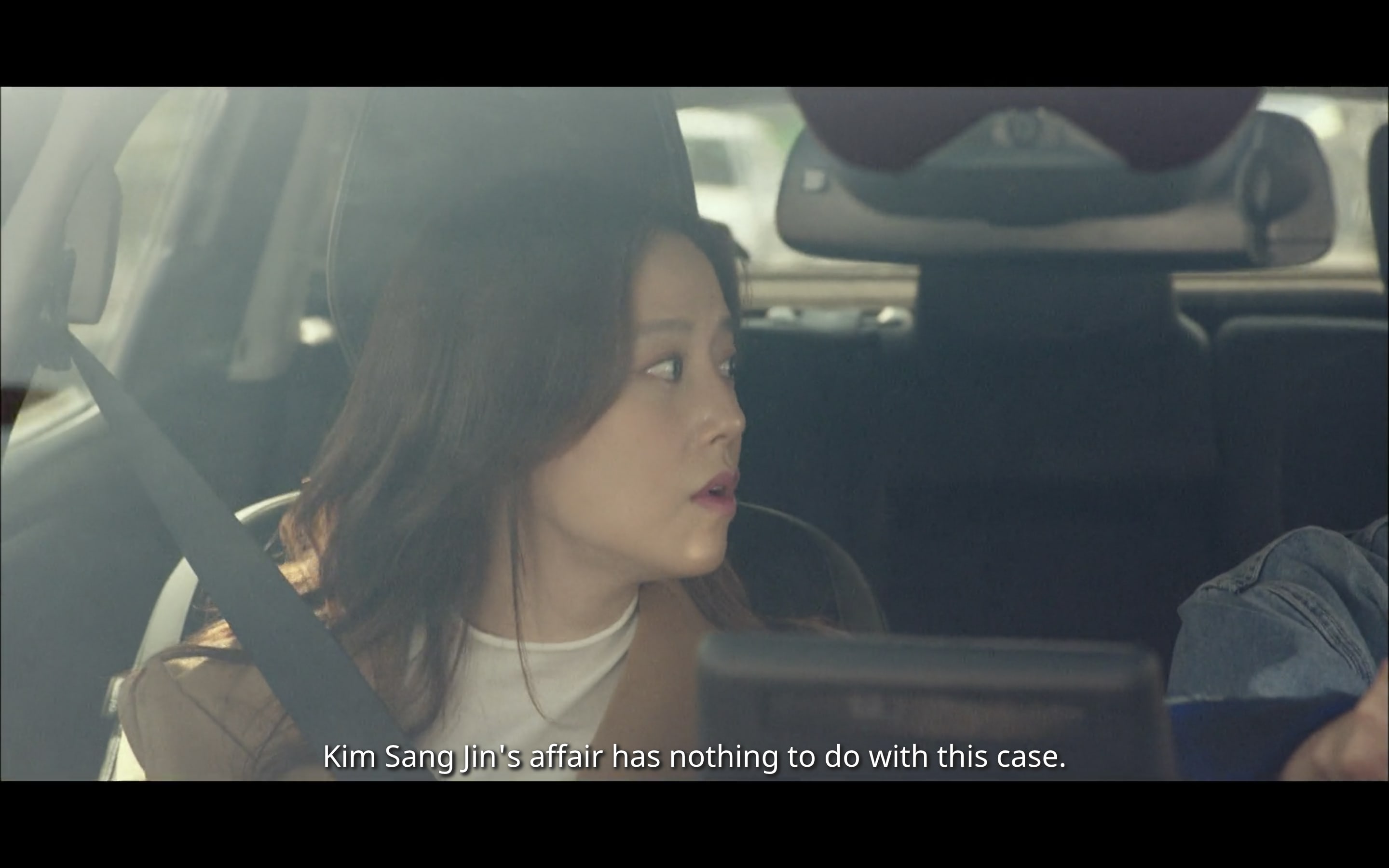 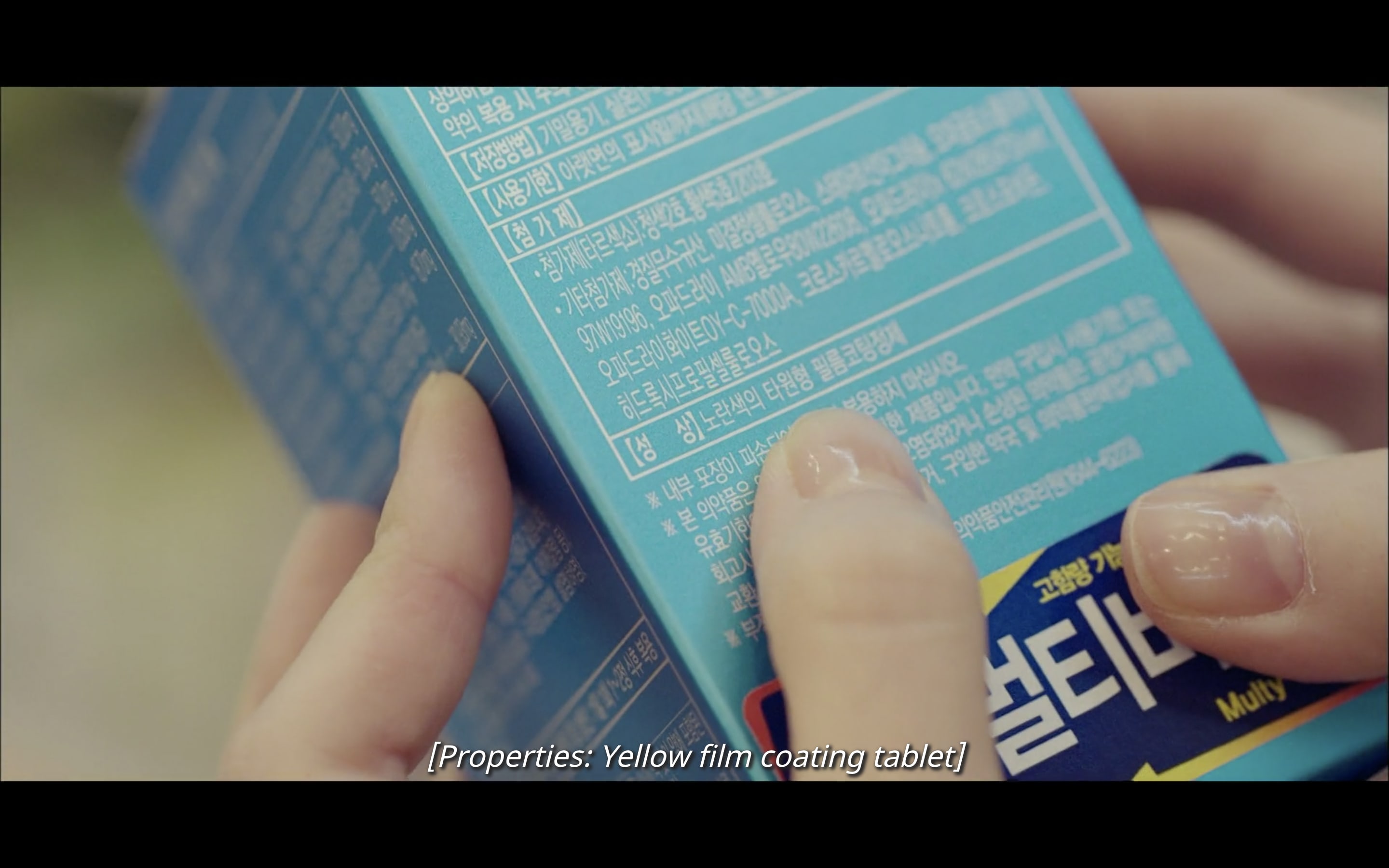 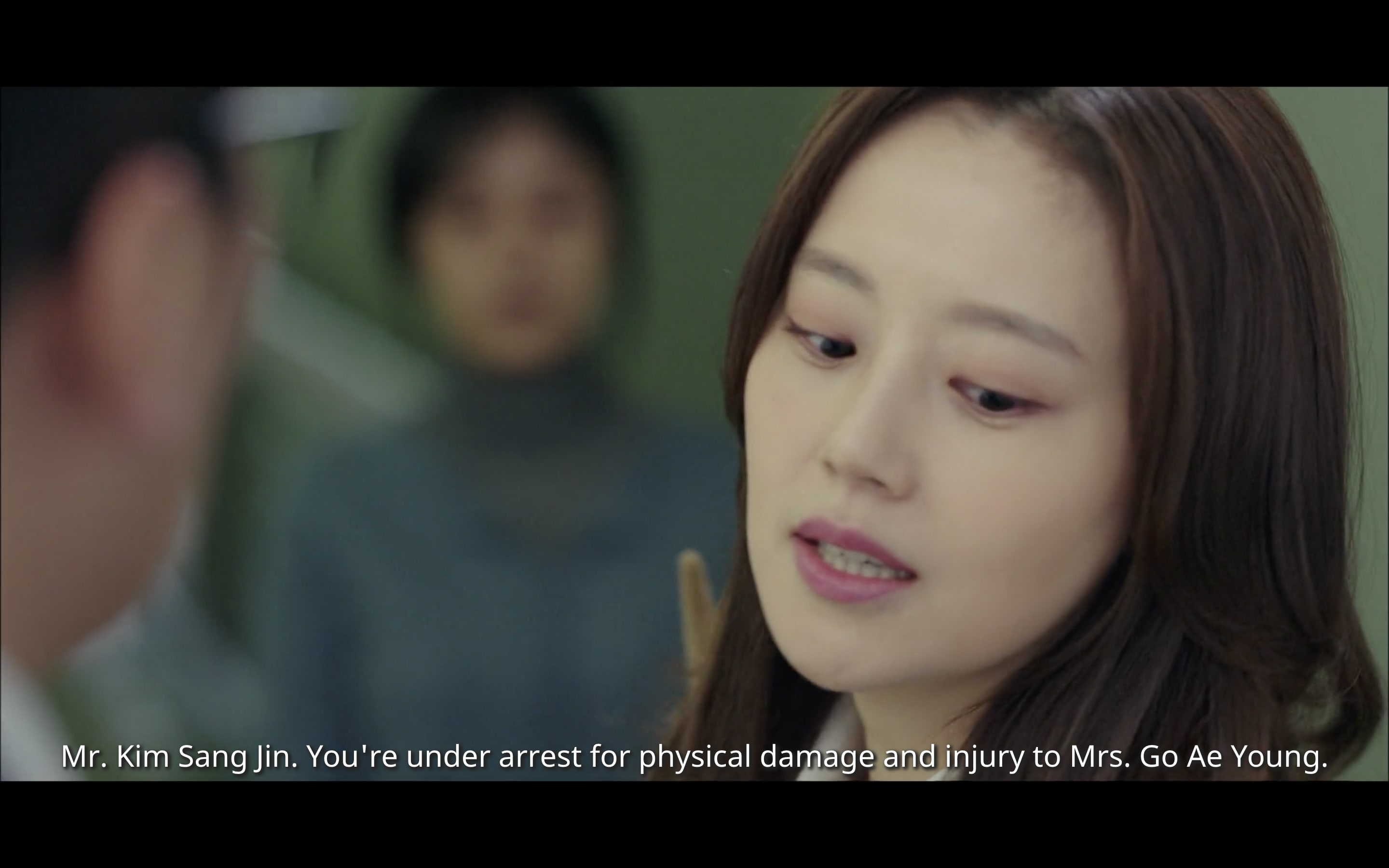 Their team has a great sense of camaraderie despite their differences, and the narrative establishes them as intelligent and competent, thus cementing them as a team to be reckoned with. Their team will no doubt be a formidable opponent to Hee Sung’s lies and manipulation, and it will be captivating to watch them work together to find the truth.

Something to be expected from the teasers is the striking difference between Hee Sung’s demeanor when he’s around Ji Won and his daughter Eun Ha (Jung Seo Yeon) versus when he’s by himself. As soon as they aren’t looking, his whole expression darkens, and viewers are left to wonder what he’s capable of. A particularly chilling scene is when he practices smiling in the mirror.

After this scene, you can see the calculation behind his smile. It’s almost as if you can hear his brain telling him to make sure all the little makings of a genuine smile are on his face. It’s meticulous, cunning, and no doubt speaks to how he approaches his crimes. Seeing that Hee Sung is so committed to his lies and friendly appearance, he definitely won’t be an easy catch for our team of detectives. Lee Joon Gi deserves major praise for his portrayal, and I suspect he will continue to shine as the drama continues.

While it’s clear this show is going to explore the psychology of killers through Baek Hee Sung, the scene near the end of the second episode with Ji Won and Park Seo Young (Lee Ju Yeon), a suspect in a violent murder of an elderly woman, also seems to raise some questions. Ji Won initially asks Seo Young for her DNA to test against the DNA found at the crime scene, but tensions rise when Seo Young reveals her true colors and cuts Ji Won under her eye. Ji Won fights back and lists the different ways she could kill her quickly.

Ji Won seems cold and calculating in this scene much like her husband’s secret self. Of course, as a dutiful detective, she doesn’t follow through with any of her threats. This scene brings a lot of intrigue to Ji Won’s character and begs the question of how innocent she will remain as the next episodes air. It also further sets her up as a foil to Hee Sung’s character. While she could have easily followed through with the same violence Hee Sung and Seo Young have instigated, she chose not to. It will be interesting to see how she approaches Hee Sung’s crimes and if her reactions will continue to teeter between right and wrong.

HATED: Hee Sung not taking Eun Ha’s side when she was in trouble

One scene that isn’t particularly fun to watch is when Ji Won and Hee Sung are called to come to Eun Ha’s school because she got in a fight with her classmate. Eun Ha is in tears and has a nosebleed after her classmate hit her for touching her doll. While Ji Won tries her best to mediate the situation and asks for an apology, the opposing mother is rude and callous. Eventually, when Hee Sung enters, he caves to the mother’s requests and tells Eun Ha to apologize. 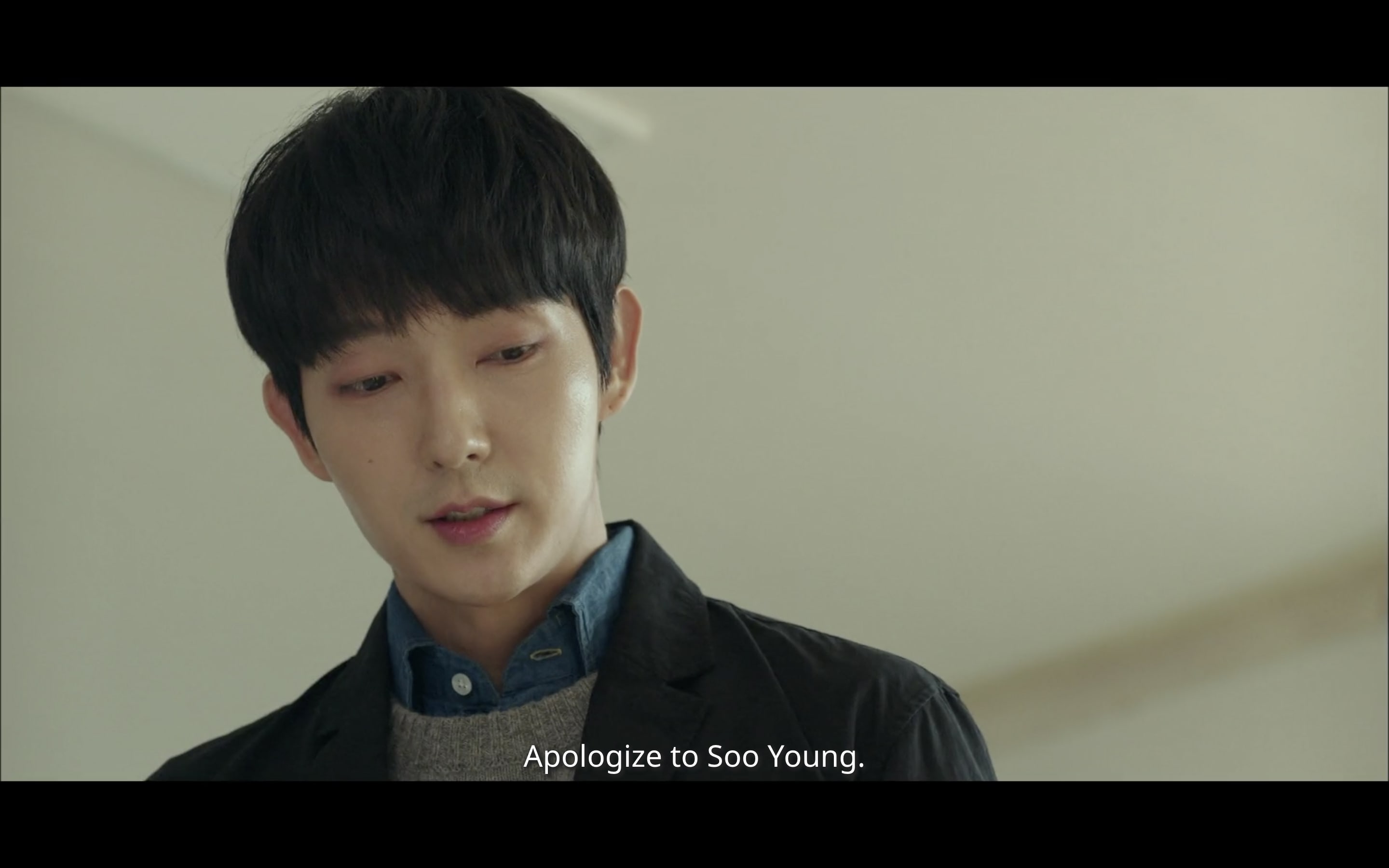 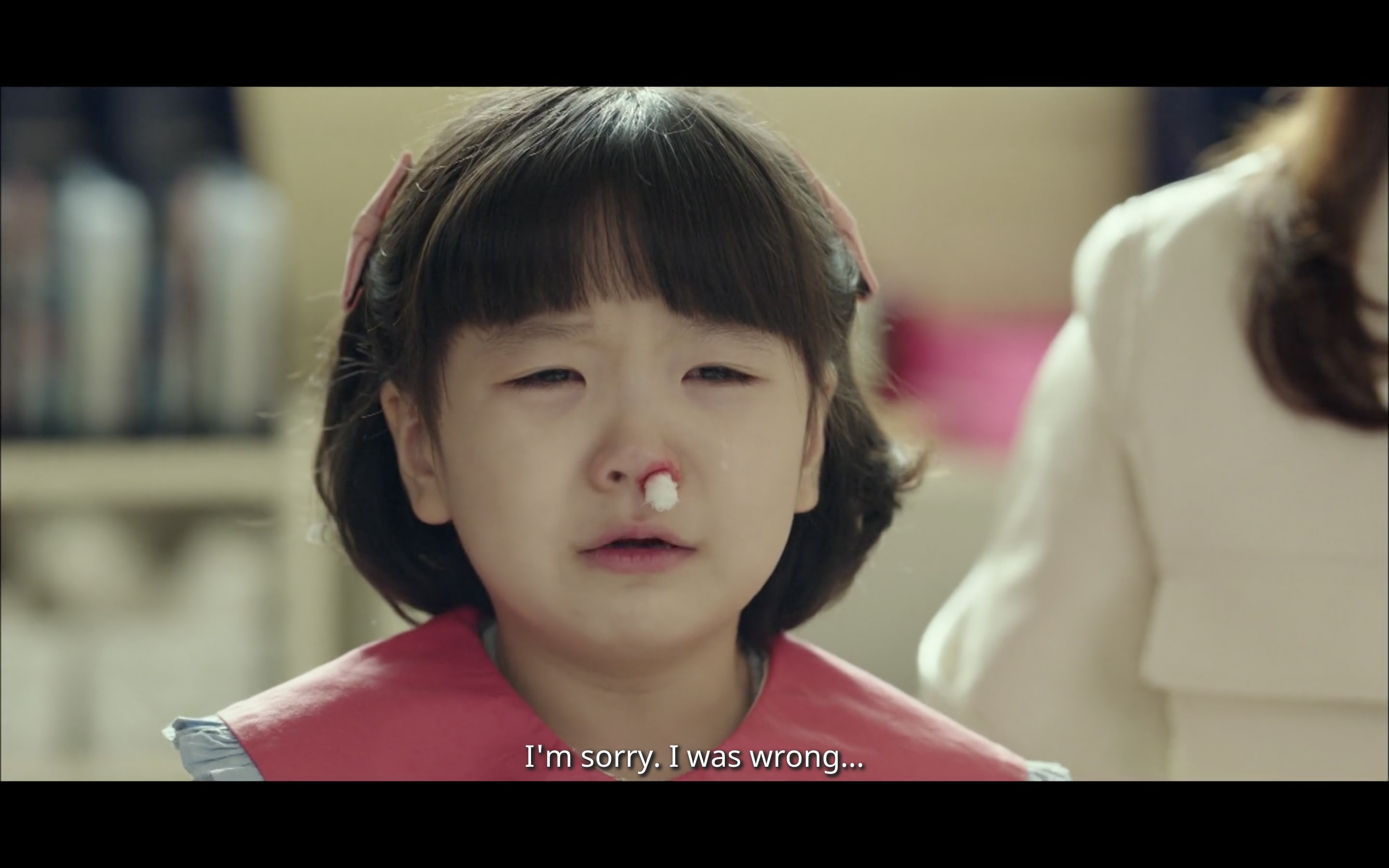 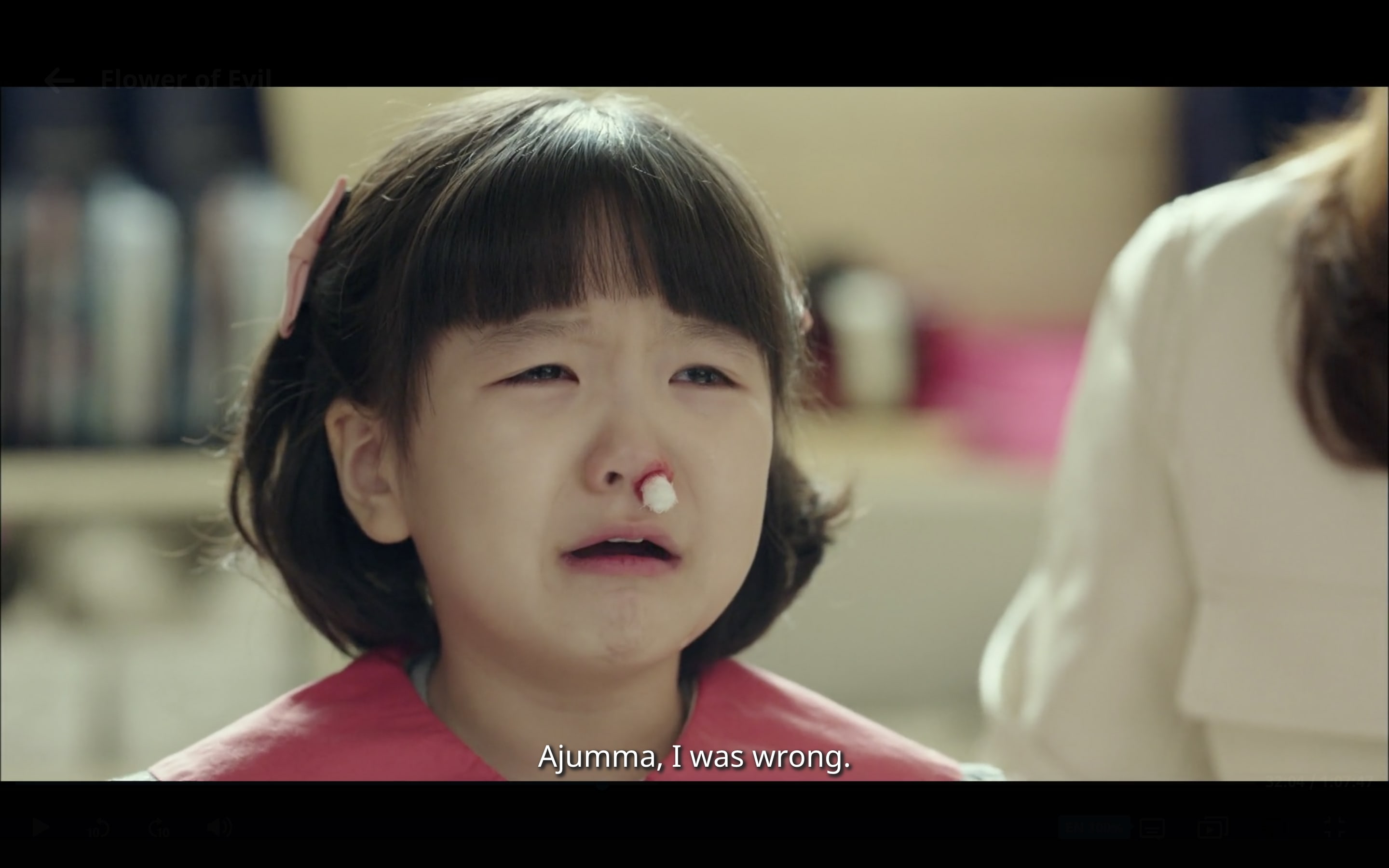 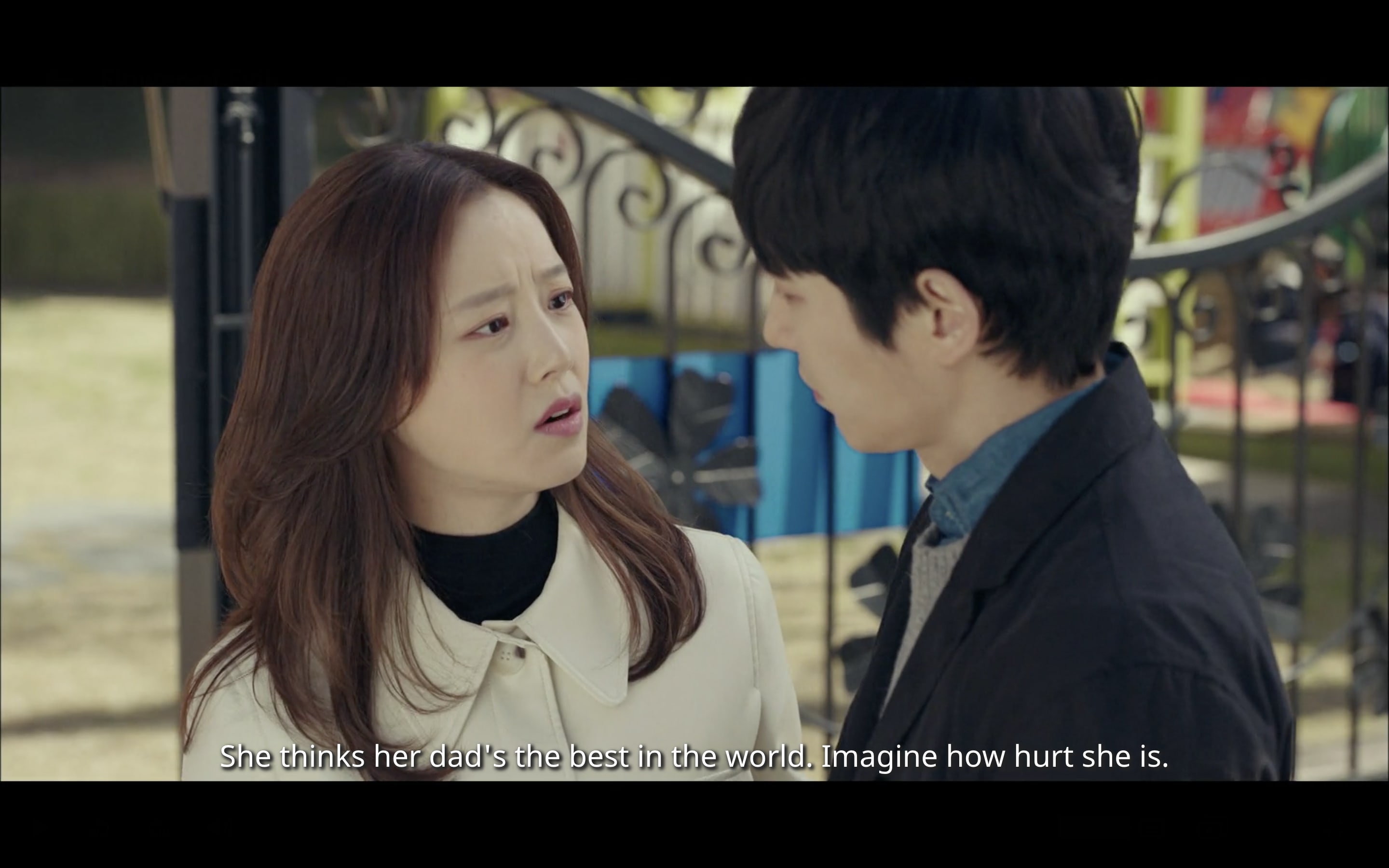 While he certainly cheers up Eun Ha afterwards, it’s still a heartbreaking scene. Much like Ji Won points out, he invalidated Eun Ha’s feelings and further disappointed her because he’s her favorite person in the whole world. Seeing Eun Ha cry is a total punch in the gut, and it makes you hope you’ll never have to see it again. It begs the question, will Eun Ha bear witness to any truths about Hee Sung’s past? Will her adoration for her father be twisted into something else later on? It will be both interesting and gut-wrenching to see how their close relationship progresses as the show continues.

Begin watching “Flower of Evil” below:

Hey Soompiers! What did you think of the premiere episodes of “Flower of Evil”? Do you have any theories on how the story will unfold? Let us know in the comments below!

Currently watching: “It’s Okay to Not Be Okay,” “Flower of Evil”
All-time favorite: “Strong Woman Do Bong Soon,”
Looking forward to: “So I Married an Anti-Fan,” “Do You Like Brahms,” “Double Patty”